Read The Nurses: A Year of Secrets, Drama, and Miracles with the Heroes of the Hospital Online

The Nurses: A Year of Secrets, Drama, and Miracles with the Heroes of the Hospital 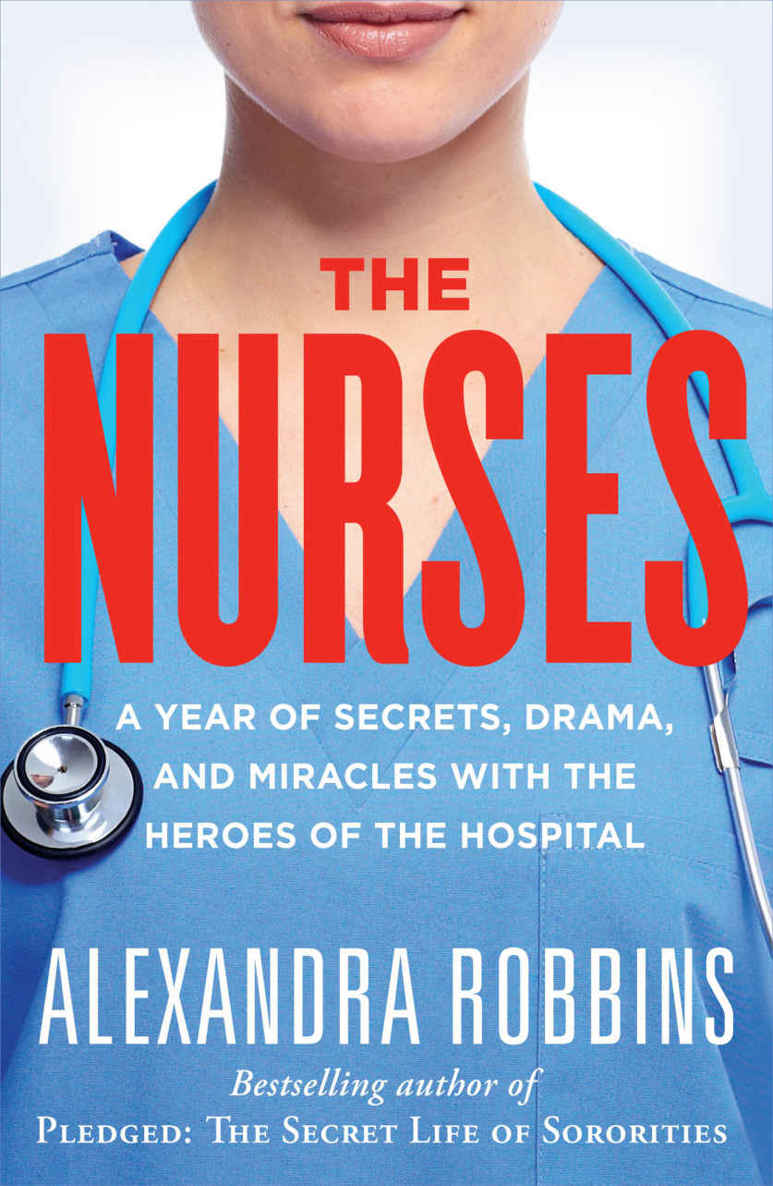 The Nurses
A Year of Secrets, Drama, and Miracles with the Heroes of the Hospital

To my family, past and present, with love

What It’s Really Like to be a Nurse:
The Joy and Heartbreak of the “Secret Club”

Crossing Doctor-Nurse Lines:
How the Sexy-Nurse Stereotype Affects Relationships with Doctors and Patients

Who Protects the Nurses?
Taking Care of People Who Punch You in the Face

When Nurses Bully Nurses:
Hierarchies, Hazing, and Why They Eat Their Young

Burnt to a Crisp:
How Nurses Cope–and Why Some Crack

The Stepford Nurse:
How Hospitals Game the System for Patient “Satisfaction”

The Code of Silence:
Painkillers, Gossip, and Other Temptations

Don’t Get Sick in July:
Nurses’ Secrets–What Patients Need to Know About Their Hospitals and Their Health

What Makes a Hero:
Why Nurses Do What They Do

What You Can Do:
Advice and Inspiration for the Public, Patients, Families, Nurses, Aspiring Nurses, Managers, and Others

Four hospitals stand within a fifty-mile radius of a major American city. On the surface, they are as different from one another as fairy-tale sisters.

Pines Memorial Hospital is a pleasant-looking cream-colored building with a sixteen-story tower and broad, welcoming windows overlooking a quiet tree-lined suburban avenue. After decades of independence, the neighborhood’s favorite hospital was bought out by Westnorth, a large healthcare corporation, which is slowly diluting the local flavor. With 190 beds, Pines Memorial serves a highly educated, wealthy population with a large percentage of academics, retirees, and nursing home residents. Because it is close to a major highway, Pines’ emergency room, which has approximately 60,000 visits per year, often treats victims of major-impact car accidents. Nurses joke that the hospital should be called Highway Memorial, because the risks of the highway are far more relevant to the medical staff than the quiet red pine forests outside of town.

Several miles away, South General Hospital occupies a mostly gray edifice curved away from the road, as if to shield its inhabitants from the gang violence that occurs frequently nearby. The Level-1 trauma center—
designated as such because it has the resources to treat every stage of injury, from prevention through rehabilitation—has 300 beds to serve one of the most indigent areas outside the city. South General’s ER sees 95,000 ER patients annually. The reputation of “The South” is like that of the proverbial kid from the wrong side of the tracks, hoping to keep up with her peers, but unable to overcome the disadvantages of living on the poverty-stricken south side of town.

Forty-five minutes west, in a peaceful corner of the city, Academy Hospital, proud and prestigious, inhabits several white-pillared, brick structures that wind around courtyards and patios, reflecting the storied architecture of its surrounding university campus. With approximately 425 beds, Academy treats a ritzy demographic of young and middle-aged residents in the nearby million-dollar homes and the students at the elite university. The Academy ER treats fewer than 45,000 patients per year, partly because it simply does not have the building space to expand its emergency department walls.

And Citycenter Medical, a longtime teaching hospital, is split between two dusty beige high-rises, perhaps representative of its dual personalities: a stalwart institution with top-notch doctors and an ER so poorly managed it is considered dangerous by many of its own staff. A 390-bed Level-1 trauma center, Citycenter has an emergency department that is crumbling beneath the weight of the 85,000 annual patients it does not have enough nursing staff to treat properly. While Pines Memorial treats more blunt force, multisystem traumas because of the car accidents, Citycenter’s traumas are typically isolated injuries, such as gunshot wounds. Easily reached by public transportation and in the heart of a densely populated city, Citycenter is a destination of choice for homeless people, drug-seeking addicts, and the uninsured.

In each of these disparate institutions, pale blue curtains shroud pods of frightened people. In each, seasoned healers perform routine procedures and medical feats behind bleached sterile walls. And in each, tracking invisible undercurrents through hallway mazes, nurses connect doctors to patients, carrying out copious orders in synchronized steps, entwining themselves intimately in convalescents’ lives.

Chapter 1
What It’s Really Like to be a Nurse
:
The Joy and Heartbreak of the “Secret Club”

“Emergency nurses practice in an environment that has been called permanent whitewater, where constant change, challenge, and crisis are the reality. Amazing stories occur each day and some of these stories may never be acknowledged or written.”

“In the hospital, we’re truly a family and we have fun together. ER nurses have the raunchiest jokes, foulest mouths, and grossest stories. Because we’re working in such close proximity there are always inappropriate jokes, comments, and teasing. Occasionally it escalates to a one-night stand between a nurse and doc, but mostly that happens off hospital grounds.”

“It’s like high school, except for the dying people.”

Molly raced toward the nurses station, dodging other fast-walking staff, weaving through stretchers lining the corridors. Traffic was stopped ahead; another nurse pushing a patient bed had gotten stuck because the halls were barely wide enough for two stretchers to pass each other. Molly had no time for this. No one did. The Pines Memorial ER was overloaded with patients, many of them moaning in pain or calling for the nurses who scurried through the brightly lit department.

After ten years as a nurse, three of them at Pines, Molly had learned to tune out the voices, and the cacophony of constant monitor chirps, high-pitched call-bell dings, and low-toned beeps of alarms from patients not her own. She didn’t even notice the smell anymore, a blend of cleaning spray, urine, and, depending on the number of intoxicated patients, alcohol.

Molly ducked under a stretcher, scooted in front of the traffic jam, and helped the nurse lift the bed slightly to extricate the wheels. When the nurse smiled gratefully, Molly flashed a thumbs-up and hustled to the station.

There, Erica, the senior charge nurse, caught her eye. “I’ve been trying to call a Code Purple for hours, but Charlene won’t budge!” Erica said. Friendly and smart, Erica struck just the right balance for a manager: She was firm but fair, and the nurses respected her. It was unusual for her to be rattled like this. A Code Purple—closing the ER to ambulances and rerouting patients to other hospitals—meant less profit for Pines Memorial, which would explain the administration’s resistance. But the ER desperately needed relief.

Charlene, the nursing supervisor, stomped into the nurses station. Erica urgently called out to her. “Charlene! We need to call a Code Purple.”

“Every room is full. Everyone has more than the usual number of patients. Even the hallway is full. We don’t have beds to move these people to,” Erica insisted. “Where are we going to put any other ambo patients who come in?”

“I’ll get back to you.” Charlene left the room.

The medic phone rang. Medic phones, which kept Emergency Medical Services in touch with hospitals, resembled walkie-talkies attached to police scanners. As Molly pressed the radio button, the other nurses nearby groaned. “What’s this one going to be?” one nurse sighed.

“Crap,” Molly muttered after she released the button. No time to waste. A working code meant that CPR was in progress.

“We have to make room for a code, y’all,” Molly said, in her unmistakably Southern drawl. Erica didn’t have time to reply before the phone rang again.

Molly reached over and hit the button. “Pines.”

“Medic forty-two en route to your location with a fifty-eight-year-old female in respiratory distress. We have her on BiPAP.” Bilevel positive airway pressure was a method of assisted breathing. The patient probably would have to be intubated.

As the nursing supervisor during a shift when higher level administrators were not in the building, Charlene had the authority to reroute ambulances. But today, she appeared to be more interested in impressing the higher-ups with an enormous patient load than in making sure the patients were safe and the nurses were able to do their jobs.

Charlene gave Erica a long look. “Okay, you can go on purple.”

“Can you fill out the justification form? I have to prep for the codes,” Erica said, already moving toward the supply closet. To call a Code Purple, the ER had to list the number of patients in the ER and waiting room, the longest wait time for patients, and the number of beds available. Charlene would have to explain the financial loss to hospital administrators.

Charlene backed away, palms up. “Oh no,
you’re
the one who has to justify this closure.” She turned on her heel and strode off.

Erica looked at Molly in disbelief. Molly fumed.
This place is exploding
, she thought.
We’re expected to work at max capacity with no breaks and no acknowledgment or assistance from administration
.

At least it was a weekday. One of the more ludicrous hospital policies dictated that on nights or weekends, the nursing supervisor had to page the administrator on call to get permission for a Code Purple. That administrator could be anyone on senior management, including IT or finance personnel. A major medical decision could be made by someone with no medical training whatsoever. At Molly’s previous hospital, the finance director was on call on a day when the ER was flooded with new arrivals. Focused on billing as many patients as possible, he had refused to call a Code Purple even when the physicians insisted that the number of patients was unsafe. A patient easily could have suffered or died because the staff was so busy checking on others. Eventually, an irate ER doctor yelled at the administrator until he agreed to divert the ambulances.

As Erica texted “Code Purple” to the staff and notified EMS and hospitals countywide, Molly and three other nurses scrambled to make room for the incoming patients. They lifted people off hallway stretchers and into standard chairs dragged in from the waiting room. They moved patients from rooms into beds in the hallway. The patients hated being in the hallway because it was a fish tank: Everyone could see you, hear you, rush by you, and knock into your bed. But the nurses had no other choice.

The first code, the 72-year-old man, would be Molly’s. She wheeled a crash cart into a newly vacated room and paged the respiratory therapist on call: “We have a Code Blue coming in. ETA three minutes. And another patient coming in on BiPAP.”

Molly opened an intubation bag to check that it contained all of the necessary supplies. She went to the medication room to retrieve the drugs needed to paralyze and sedate a patient before intubation, in case they would be needed. She set up the cardiac, blood pressure, and oxygen monitor, then visited each of her four patients to ensure they had easy access to a call light. “I’m about to be tied up for a long time with a critical patient,” she told them.

The double doors at the ambulance entrance opened. Two medics raced down the hall, pushing a gurney on which another medic kneeled, rhythmically pressing all of his weight onto the patient as he performed CPR.

The recorder nurse, who documented the proceedings and kept track of time, guided them into Room 5, which nurses had cleaned only seconds before. Molly was glad to see Clark Preston follow them. Handsome and flirtatious, brash and irreverent, Dr. Preston was loved by some nurses and hated by others. Molly thought he was funny—and decisive, which was important in a code.