Read The One Worth Finding Online

The One Worth Finding 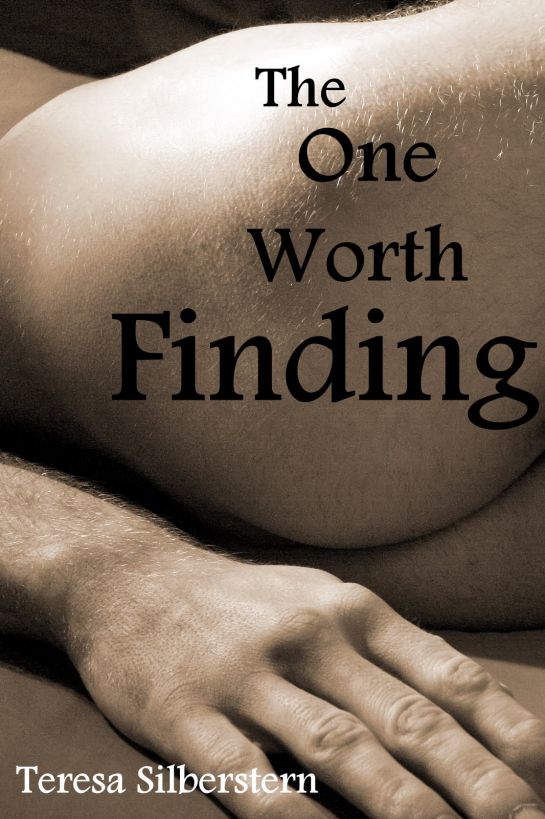 The One Worth
Finding

This book is a work of fiction. The
names, characters, places, and incidents are products of the
writer’s imagination or have been used fictitiously and are not to
be construed as real. Any resemblance to persons, living or dead,
actual events, locale or organization is entirely
coincidental.

The One Worth Finding

All Rights Are Reserved. No part of
this book may be used or reproduced in any manner whatsoever
without written permission, except in case of brief quotations
embodied in critical articles or reviews.

This is dedicated to S.F.
(he knows he’s meant :D), a gay friend of mine who pretty much got
me hooked on the idea of a prostate orgasm (he’s a big fan of it,
be assured).

But: I don’t pride myself as an
expert in BDSM-procedures!!! Everything I know about that I learned
from books and conversations. Please, everyone who actually is in
the lifestyle and/or knows better: forgive my mistakes!

I took some creative license
with sperm quantity and refractory period, but to be honest, too
much realism is always a bit tedious for me, so I allow myself a
little sloppiness with it in my own stories.

I’ll be forever grateful
to my wonderful betas Sam and Annie, who put so much time into
correcting and editing this story. Thank you so much for your
effort and encouragement- without you, this book wouldn’t
exist!

Tara
Sinclair crossed her legs and folded
her hands over her flat stomach.

Jack sighed. She always looked so prim and
proper; nobody would have guessed what lurked behind her
conservative façade when he saw her like this. Dressed in a
no-nonsense black pantsuit, light pink satin blouse, unobtrusive
make-up, a slim string of pearls around her neck. Black, shiny
fuck-me-shoes were the only detail that hinted of her
kink.

Jack found himself leaning forward in his
office chair to better catch her fragrance. He was a hardcore
dominant with a distinctive sadistic streak and therefore didn’t
feel the slightest sexual attraction towards Tara, but damn, she
was by far the best-smelling woman he knew. He sniffed slightly and
couldn’t contain the sigh of pleasure.

Too bad the male subs at the club were
mostly scared of her creepy silence and the dangerous stare and not
exactly queuing up to scene with her at night, but Tara had lost
much of her interest in playing with nameless pretty boys anyway.
She was a devil with the bullwhip and could bring every disobedient
man to his knees with the cane. But her secret preference was one
that didn’t make her popular with the straight subs: Tara Sinclair
was the right Domme if a man wanted to be fucked. Anally. With
what? Mistress Tara was certainly open minded when it came to that
particular question. But Jack had the impression that lately, Tara
was looking for more than a shapely butt.

Hell, she was 35. A successful writer, she
had a life beyond the club. But she hadn’t been in love since her
husband had died eight years ago. Eight years of loneliness that
showed in a profound sadness deep in her eyes. A notion that even
her stern, business-like attire couldn’t hide. Tara Sinclair needed
love. And none of the subs at the club managed to capture her
interest anymore.

“
I’m not interested,” Tara
shrugged, “and you would have to find a male sub who’s ready and
able to do this. In this club, most subs aren’t keen on getting
fisted. Except maybe Grayson, and he’s in a committed relationship
I tend to respect. Albert doesn’t share him. That’s not strap-on
sex, Jack. Fisting is more personal, trickier, needs more trust.
I’d need an experienced, single, durable sub, preferably straight
since I would have to train him and I’d want him to be most
comfortable around me, preferably with an affinity to take it up
the ass, for I’d rather give pleasure than pain when I fist a sub.
Good luck in finding that little gem, Jack. I sure as hell wasn’t
very successful with my search.”

He heard the bitterness in her voice.
Yeah, it couldn’t be easy to find a straight, male sub she could do
those kinds of things with. She possibly thought she’d used up her
luck by finding him once; her husband had been her sub. The perfect
one, obviously. The only one who’d ever truly satisfied her need.
To be on top. To dominate. To do the fucking. She had loved him
with all her heart, only to lose him at a ridiculously young age in
a senseless car accident.

Jack winced and
had to fight the
urge to hug her. He knew she didn’t welcome any displays of
affection, public or not. In fact, she didn’t like to be touched at
all. Jack respected her need for distance. But sometimes she looked
so small and lost that his heart almost broke just from looking at
her. He sighed.

“
If I find him,
will you do the
scene?” he asked slowly. ”In a public showroom?”

She smiled, and Jack found himself smiling
back. She was a fascinating woman. Too bad she was a Domme. And
never in a million years would he allow anyone to play with his
butt. Not even tiny, sexy Tara Sinclair with her huge green eyes
and the proud little chin. And that darn sadness in her features
that told the story of a woman who couldn’t open up to
anyone.

“
That’s settled then,” he said,
clearing his throat, “I’ll contact you when I’ve found that
sub.”

Tara
got up, her movements slow and
graceful. Everything about her screamed fairy.

She left his office on a firm stride,
maneuvering on her sexy high heels without difficulties. Her hips
swayed enticingly, and she flashed him a last smile before she
closed the door behind her.

Jack smiled. She would be mighty
surprised. For Jack knew just the man to call now.

Ella Phillips produced the frown of
the century, her giant chocolate brown eyes narrowing in
mistrust.

She crossed her arms over her tiny
chest.

“
Just because I’m five doesn’t
mean I’m stupid,” she growled, which did nothing to make her
squeaky voice more threatening. “There’s no way you can make this
needle-thingy NOT hurt me!”

Dr. Aaron Harte squatted down and looked
at his little patient with a benevolent, slightly snobbish calm
that mimicked Ella’s.

“
Believe me, Ella,” he said with
a quiet shrug, “I guarantee this vaccination won’t hurt. I’m the
master of injections. My injections NEVER hurt. I’m the BEST when
it comes to needle-thingies.”

Ella bit her lower lip and looked at
him warily.

“Do you have a trophy?” she asked
slowly.

Aaron tried his best not to smile and
managed. Barely.

“
Let’s make a deal, Ella,” Aaron
said, pulling a giant red and white lollipop from his lab coat, “I
give you this embarrassingly huge piece of candy after the
vaccination, and if it hurts, you can punch me on the
nose.”

“
But Ella,” Aaron exclaimed,
feigning indignation, “of course I won’t punch back! I’m a
doctor!”

That convinced his unwilling patient,
and Ella bared her left arm.

“
Look at James, Ella,” Aaron said
and injected the vaccine with a swift and graceful movement while
Ella complied and looked at his male nurse, who was waving
enthusiastically from the corner of the examination
room.

Aaron put the used needle into a
sterile bowl and gently put a band-aid over the tiny puncture
wound.

“When do you start, Dr. Harte?” Ella
inquired carefully.

“What?” she asked
incredulously.

James
disposed of the needle and left the
room with a smile.

It was silent while
Ella chewed her
lower lip and looked almost a little bit disappointed.

“
Told ya.” The doctor shrugged,
handing her the lollipop. “But you know what? You can punch me
anyway. Go ahead. I’m a tough guy.”

He offered her his nose. Ella stared at
him for a minute.

“
But you don’t deserve a punch
for NOT hurting me.” She pouted and leant over to press a tiny kiss
on his nose.

Aaron smiled brightly at her and
hugged her for a second.

“You’re welcome, Ella,” he said with a
tiny bow, “I hope you’ll be back next year. Let’s go find your
mom.”

He straightened and took Ella’s tiny
hand, leading her into the hallway where the girl’s mother was
chatting with James.

Ella beamed at him, and Mrs. Phillips
pretty much did the same. Aaron didn’t know why, but he almost had
to force a smile. He was bone-tired.

He released a pent-up breath when mother
and daughter left and he heard the key being turned in the lock by
the ever-attentive James.

Aaron smiled at him.

“Last patient for the day, huh?” he
said.

Damn, he was glad. All the mothers flirted
with him, and there were days when he simply couldn’t take it. He
was glad that most of them thought he was gay, otherwise, the
dinner invitations would possibly pile up in his waiting room. No,
he had no interest in diffusing their slight
misconception.

It helped that James, his male nurse,
actually was gay; most people thought they were a pair, which
couldn’t be farther from the truth. James had been committed to
Harrison, a dominant, dark, bear of a man, for years now, and
didn’t have the slightest interest in sweet, blond men like Aaron
to begin with. And Aaron was looking for a gentle, tall, voluptuous
woman who would fuck his ass with various objects, preferably
generously sized…not that he got all that much sex lately. It had
been years, to tell the truth.

Incubi - Edward Lee.wps by phuc
Hate List by Jennifer Brown
The Glorious Cause: The American Revolution, 1763-1789 by Robert Middlekauff
Death By Bourbon by Abigail Keam
Rancid Pansies by James Hamilton-Paterson
Harry's Game by Seymour, Gerald
Unrestrained by Joey W. Hill
Tied Down: He'll see to her needs, if she can tend to his... by Haven, Leila
A Cowboy in Ravenna by Jan Irving
Death of a Village by Beaton, M.C.