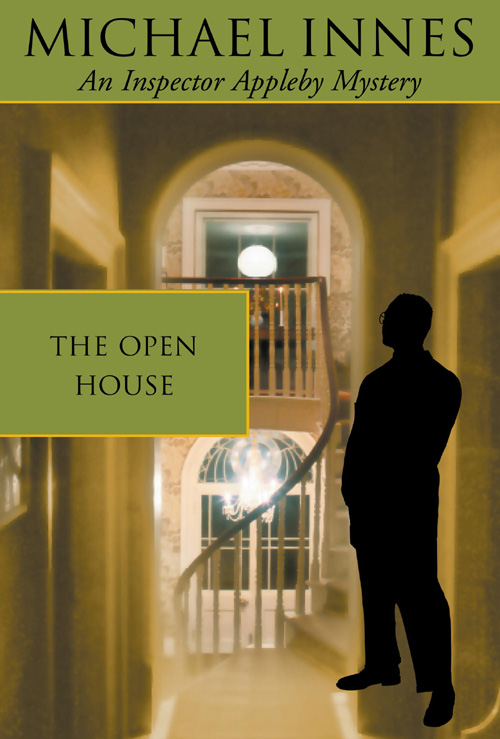 This edition published in 2011 by House of Stratus, an imprint of

This is a fictional work and all characters are drawn from the author’s imagination.
Any resemblance or similarities to persons either living or dead are entirely coincidental.

After a short interlude travelling with AJP Taylor in Austria, he embarked on an edition of
Florio’s
translation of
Montaigne’s Essays
and also took up a post teaching English at Leeds University.

By 1935 he was married, Professor of English at the University of Adelaide in Australia, and had completed his first detective novel,
Death at the President’s Lodging
. This was an immediate success and part of a long running series centred on his character Inspector Appleby. A second novel, Hamlet Revenge, soon followed and overall he managed over fifty under the Innes banner during his career.

After returning to the UK in 1946 he took up a post with Queen’s University, Belfast before finally settling as Tutor in English at Christ Church, Oxford. His writing continued and he published a series of novels under his own name, along with short stories and some major academic contributions, including a major section on modern writers for the
Oxford History of English Literature
.

The sudden immobilizing of his car hadn’t much discomposed John Appleby, but the subsequent failure of his electric torch was another matter.

Not that what had happened to the car wasn’t absurd enough to make anybody cross. The night was uncommonly dark and the road unfrequented; he had neither overtaken nor met any other vehicle for miles; there seemed to be no nocturnal pedestrianism or bicycling in this part of the countryside, so that his powerful headlights had the verges comfortably to themselves. Then suddenly there had been the tail lights of a slow-moving van ahead of him and the brow of a hill beyond. So he had slowed, and changed down to third. Only the gears somehow hadn’t engaged, and in a moment he knew why. He was waving the gear-lever in the air.

It hadn’t been difficult to steer on to a reliable-looking grass verge, and there he had come to a halt and investigated. He was in neutral, he found, and in neutral he was going to remain. The confounded lever had broken off close to the gearbox. There was nothing whatever to be done.

Appleby switched on the light above his head, and regarded the useless object he was left with. Grasped in reverse, it could be employed to crack a dangerously violent criminal on the head. With its knob suitably padded, it might serve a painter as a maulstick. But these were idle speculations. Appleby chucked the thing behind him, and got out a map. What he had to find was a tolerable pub. The car wasn’t of a make that was exactly thick on the ground; in fact it was a recent acquisition of Lady Appleby’s, and rather exotic. A new gear- lever would have to come from goodness knew where. Since the hour was not far short of midnight, Appleby was booked for a strange bed. He located his approximate position, which certainly seemed to be in notably uninhabited terrain. But not much more than a mile ahead, a little way down a side-road of a minor sort to the right, was inscribed the word
Inn
. It seemed in an isolated situation for an hostelry; there didn’t appear to be so much as a hamlet nearby. But he could either get a room there, or make a nuisance of himself until they found him a hired car. Appleby rummaged in his suitcase, shoved a few necessary articles into a small bag, locked up the disgraced vehicle, and took to the road.

There was no moon, but the heavens did show a faint powdering of stars. Although he had a torch in his pocket – a small but powerful torch – it didn’t at first occur to him that he would need it except to consult his map or read a signpost. English darkness is seldom so entire as to render an alert walker hopelessly blundering on an unimpeded road. And to walk with confidence under such conditions can be rather fun.

But in fact it
was
very dark.
The blanket of the dark
, Appleby said to himself as he moved cautiously forward.
Nor heaven peep through the blanket of the dark to cry ‘Hold, hold!’
One of Appleby’s academically inclined children had once solemnly assured his father that here was a textual corruption, and that Shakespeare had really written
blank height of the dark
. But that was nonsense, Appleby told himself now. The tactile quality of a blanket was just what, in this Tartarean blackness, his own nose felt uncomfortably up against. So he switched on his torch after all, and moved more rapidly forward. He would need it, in any case, if he was not to miss that unnoticeable side-road on his right. And if a car came along behind him it might help him to get a lift.

It was some ten minutes later that the torch failed. He fiddled with it, but to no effect. The battery couldn’t thus abruptly have exhausted itself. The trouble was probably in the little bulb. One ought always to carry a spare bulb. This time, and at a halt in the darkness, Sir John Appleby actually was upset. Long ago – long before he had become Sir John – he had let his life depend on an electric torch more than once. He had also let it depend on toy pistols, knotted sheets, implausible disguises, ridiculous bluffs. But at the moment, somehow, torches seemed almost symbolically important. A policeman, however retired, who permitted a torch to let him down like this was slipping up badly on the elements of his craft.

Dismissing this nonsense from his head, Appleby got under way again. But now he was going to be in real difficulty. It was his guess that, in a middle-of-the-road way, he could forge ahead indefinitely without coming a cropper; something that appeared mere instinct, but that in fact must be the ghost of sight, was going to guide his steps. But sensing that side-road was another matter. To manage that he must keep very close to the right-hand verge. It wasn’t clear to him that this mightn’t at any moment tumble him into a ditch. So perhaps his best plan was to abandon the idea of making that inn, and keep straight on until he came on some other inhabited place. He’d better take a look at his map by matchlight. It seemed inconceivable that the road should be totally devoid of human dwellings for more than three or four miles at the most. But he’d have a look. He ought to have checked on the point at the start. He took the map from his pocket, and felt for his matches. He hadn’t any. And instantly he could see, almost like a hallucination, the dashboard of his car, with his pipe, tobacco-pouch and matchbox conveniently ranged on the little shelf above it. Appleby’s displeasure with himself grew. He meditated briefly a return to the car, and waiting in it until something came along – which might conceivably not be till daylight. But this seemed defeatism. He moved slowly forward.

He found the side-road – or thought he did – after all. The illuminated dial of his wrist-watch told him it was still twenty minutes short of midnight, and the inn couldn’t now be more than two or three hundred yards away. Appleby was not at all tired, but he did suddenly feel uncommonly hungry. He had been driving most of the day, and his last wayside meal had been a light one early in the evening. He supposed that even at this hour a pub would find him bread and cheese. If he spent the night there he would count as a resident and even be allowed a drink. He found himself moving forward at what was almost a reckless pace.

It was now darker still, and this seemed to be because even the ineffective stars had vanished. Or they had vanished except for a few straight overhead. Appleby realized that this humble little road – or lane – to nowhere in particular was either passing through woodland (of which he could recall no indication on the map) or lined on either side with trees of a considerable height. This was the only explanation of what had happened in the heavens.

Closing-time having arrived more than an hour ago, it was likely enough that the people at the pub would have gone to bed. Certainly there was no glimmer of light ahead – any more than behind or to either side of him. He hadn’t seen any such glimmer, indeed, since leaving his car. If the pub proved to be untenanted – long since closed down through lack of custom in this seemingly unpopulated region – he would be reduced to breaking into an outbuilding and burrowing into straw, if there
was
any straw. But if it had tenants he certainly wouldn’t make any bones about rousing them up.

Walter Mosley by Twelve Steps Toward Political Revelation
Master (Chaos Bleeds Book 8) by Sam Crescent
The Intern, Book 1 (Alpha Billionaire Romance Series) by Haut Pink Publishing
You're a Horrible Person, But I Like You: The Believer Book of Advice by The Believer
The Unofficial Harry Potter Party Book: From Monster Books to Potions Class! Crafts, Games, and Treats by Fox, Jessica
Last Night at the Viper Room: River Phoenix and the Hollywood He Left Behind by Edwards, Gavin
Saint Anything by Sarah Dessen
The Watcher by Charlotte Link
Power Revealed (The Elementers) by Berry, Leah
In Their Footsteps by Tess Gerritsen