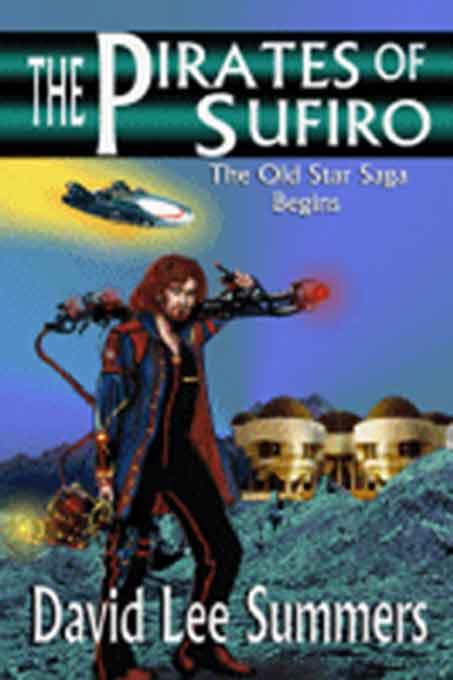 Re-published internationally by LBF Books, as a co-publication with Hadrosaur Productions in 2005

All rights reserved. The use of any part of this publication reproduced, transmitted in any form or by any means, electronic, mechanical, photocopying, recording, or otherwise, without the prior written consent of the publisher, LBF Books, imprint of Lachesis Publishing, is an infringement of the copyright law.

Ebook in multiple formats are available from

This is a work of fiction. Names, characters, places, and incidents are either the product of the author's imagination or are used fictitiously, and any resemblance to any person or persons, living or dead, events, or locales is entirely coincidental. The author and publisher recognize and respect any trademarks mentioned in this book by introducing such registered titles either in italics or with a capital letter. The Pirates of Sufiro

... and all other people with the courage to chase 30-foot unicorns.

I have received input and support on this work from many people over a number of years. I would like to single out just a few of the people who have helped in one way or another. First off, I wish to thank the fellow members of the writer's group held at the New Mexico Institute of Mining and Technology in 1988; including Jo and Ross Lomanitz, Susan Woods, and Anne Sullivan. Without them, the first chapter would never have gotten off the ground. Many thanks to Amy Stoklas-Oakes, Paul Avellar, Jeff Lewis and Bridget Watts. They asked the toughest questions about the book in its various incarnations and have made this, in my opinion, the definitive edition.

Finally, the planet Sufiro seems linked in my mind to Earth's own New Mexico. For that reason, acknowledgment is made to the roles of Lt. Col. Christopher "Kit" Carson and Elfego Baca in history. Kit Carson is known for many things. In this case I remember his action of raising the United States flag over Taos as the American Civil War broke out, making a statement that New Mexico was a free territory. Throughout his life, Elfego Baca fought for the rights of the oppressed in New Mexico. Their dedication to the Land of Enchantment is deeply appreciated.
PREFACE
The late thirtieth century was a period that saw many

changes for humanity and its place in the galaxy. The planet Sufiro seemed to be a nexus for those changes. Formal histories properly credit Sufiro as the first humanly habitable planet to produce the important mineral, Erdonium. Likewise, the formal histories credit Sufiro as the first planet visited by the Cluster. However, those same histories often neglect to mention that Sufiro was founded by the grandfather of John Mark Ellis; a man whose name would forever be linked with the Cluster. Perhaps more importantly, those formal histories do not tell the fascinating story of the people of Sufiro.

This edition of
The Pirates of Sufiro
is an admittedly romanticized history. Though romanticized, it does attempt to reflect history accurately. There have been a number of changes and additions made to this edition from its first appearance. These changes and additions have been made to give a more complete and accurate picture of life on and surrounding the planet, Sufiro.
PART I
NEW GRANADA
"Many historians and romantics view the founding of New

Granada as a renaissance. They see it as a place where people came to do art and science while living off the land. The reality of New Granada represented a lot of hard work. We only did what we did in order to survive."

+ Guillermo Roberto Gomez from
Sufiro, An Oral History
A QUIET BURNING IN THE DARKNESS

Bright, almost fluorescent, orange blood stood in puddles of congealed red blood on the deck of the Alpha Centauran freighter. There was an odd sense of order as humans filed through the triangular corridor. They carefully stepped over the tentacled bodies of Alpha Centaurans. The humans hefted crates of hominid/computer interface cards through the battered airlock into their own ship, the
Legacy
.

One man stood to the side and watched intently; sweatmatted long, red hair clung to his forehead. He carefully stroked his moustache with his left hand, glad to see that most of his crew was still alive. Captain Ellison Firebrandt began to relax; as he did, he realized he still gripped his hepler pistol tightly. The captain holstered the pistol, then allowed his fingers to remain lightly on the grip.

Something crashed; Firebrandt yanked the hepler from its holster and aimed at the sound. One of his crewmembers had misstepped and slipped in a puddle of orange blood. Interface cards were strewn across the deck. The captain sighed relief when he saw the man was not seriously hurt; the body of a tentacled humanoid broke his fall. Firebrandt's lieutenant, Carter Roberts, ran forward and cursed at the fallen man.

"Avast!" shouted Firebrandt. "Get him on his feet and back to the ship. We don't have much time." The captain snarled as he thrust the hepler back into its holster.

"You are absolutely correct, Firebrandt," growled a voice at the other end of the deck. "In fact, you have no time at all." A nine-foot, tentacled Alpha Centauran appeared in a doorway. He was captain of the ship. Firebrandt recognized the uniform. The Alpha Centauran leveled a weapon at Roberts and the crewman. "This weapon fires a projectile. Once it's in the body, it slowly expands, ripping and tearing its way through your internal organs." The Alpha Centauran smiled toothlessly at Firebrandt. "It's no less than you and your crew deserve."

Slowly, deliberately, Firebrandt retrieved a pipe and match from the pocket of his trousers. The Alpha Centauran captain inclined his head. He saw no immediate way the wooden contrivances posed an immediate danger.

The Alpha Centauran looked from Firebrandt to Roberts. "Do I kill you Firebrandt, or shall I let you watch as your friends writhe in unspeakable pain?" The Alpha Centauran stood silent for a moment. He seemed surprised at Firebrandt's apparent lack of concern for either his crewmembers or himself.

Firebrandt raised the pipe to his lips, gripping it with his teeth as the Alpha Centauran pointed his weapon at the captain. Roberts recognized the signal and hurried the fallen crewmember through the airlock.

"Ever since the days of wooden ships on Earth, fire could be deadly." The captain struck the match on the sole of his boot and raised it to the pipe. The Alpha Centauran stared in wonder as Firebrandt exhaled smoke. The captain noted the alien's weapon as it dropped slightly. "Too bad Alpha Centauran blood is so combustible." The captain lazily tossed the flaming match into a pool of orange blood. Quickly, he turned and sprinted for the airlock.

Later in the afternoon, Captain Firebrandt stepped into his quarters. He eased into a large, soft chair and raised a familiar, battered pipe to his lips. He watched as smoke curled about his head. Fire on a ship was deadly. He grinned to himself. Though he realized the fire that burned in his pipe could represent an early death, the smoke comforted him. His body slowly melted into the contours of the chair.

The captain's cabin was paneled in the finest wood he could find. The windows were overlaid in stained glass. A brass lantern hung from a chain by his side. The captain was in the only place he ever truly considered home. He thought of his youth. There was nothing there but poverty and misery.

A voice sounded on the intercom, "Sorry to interrupt, sir. This is Roberts, at the helm."
The captain stood reluctantly, hating the creaking of his bones. He placed the pipe on the table next to the chair and walked to the far wall and touched a glowing sensor pad. "This is the captain, go ahead."
"Computer's picked up a ship at long range," said Roberts through the intercom. "She's large. A freighter, I'd say, sir."
"A freighter," growled the captain. "Are you sure? What's Computer say?"
There was a hesitant pause. "She's still a long way off, sir. If you want, we can take a closer look."
Firebrandt thought for a moment. "Don't approach any closer than you have to. If she's a warship, I want time to get my ass out of range."
The captain stood silently for a moment. Flushed, he hit the touch pad and turned off the intercom.
Sheets rustled. "Trouble?" A sultry voice came from the darkness where the bed stood.
"Maybe." Firebrandt stepped over to the bed and turned on a faint light. The woman rubbed her eyes sleepily and brushed a strand of black hair away from her face. The captain kissed her full red lips.
She inched closer to him. He read a question in her deep, brown eyes. "Is it a warship?"
The captain shook his head gently. "Probably a freighter."
"Another raid! So soon?" She looked down at the satin sheets.
"Another raid means I can give you more." He shook his head apologetically. In a rush of inspiration, he leapt from the bed and gestured around the cabin. Gold and silver treasure glimmered in the faint light of the brass lantern. "Look! Look at all the things I've been able to give you."
She snorted when she looked at him. "What you've given me is a lot of worries. I love you, not these damned baubles. It's not easy being the consort of a pirate!"
"Quiet!" He hurried back to the bed. "Easy, this is not a pirate ship. This is a legally licensed privateer."
"Damn lot of difference that makes if you get caught." Her eyes moistened as she looked at him.
Firebrandt looked down then shook his head. "I can't change what I am. Do you want me to go back to what I was?" He rubbed his tired gray eyes. "Suki, do you really want me to go back to being a miner like my father on some nameless asteroid?"
"No," she whispered. "I don't want that." She reached out and embraced him. Even through his shirt, he felt the warmth of her naked body. "I just want you to think about us. I want you to think about the fact that we already have a lot. It may be time for us to settle down. We have so much." She shook her head. "Sometimes I wonder why you're so driven."
"It's a passion, like a quiet burning in the darkness of space. This ship is the only place I know in the galaxy where I can be truly free." The captain looked into Suki's eyes. "We're both free here."
She looked away. Her dark brown eyes grew moist. "What will you do if you get captured?"
He looked back to his chair and table. He saw the pipe as its last embers smoldered to death. "I'll burn the bastards. Fire is deadly, you know."
She smiled back at him. "Fire can also be very warm." She ran fingers through his long, red hair.
He gently stroked her hair. The hum of the ship's thrusters gave a rhythm to the captain's thoughts and actions. He smiled, happy to be free. Firebrandt embraced Suki as long, delicate fingers unbuttoned the tunic.
* * * *