Read The Power of Three Online

The Power of Three 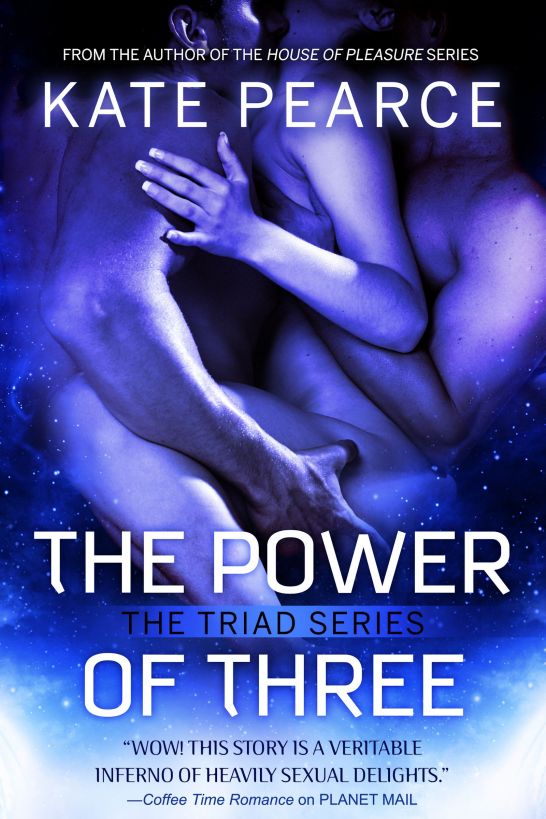 The Power of Three

This book is a work of fiction. The names,
characters, places, and incidents are products of the writer’s
imagination or have been used fictitiously and are not to be
construed as real. Any resemblance to persons, living or dead,
actual events, locales or organizations is entirely
coincidental.

All rights reserved. No part of this book may
be reproduced, scanned, or distributed in any manner whatsoever
without the prior written permission from the author except in the
case of brief quotation embodied in critical articles and
reviews.

Soreya Lang has never met a male telepath
before, let alone one who is willing to die for her on an
interplanetary mission gone wrong. Risking everything, she acts on
her instant telepathic and physical connection with Esca and
encounters a level of psychic power she never knew existed.

Esca can’t believe he’s finally met the
female who will complete his sexual and telepathic triad. He
promises himself that if they survive, he’ll take her back home,
introduce her to his enigmatic First Male, Ash and pray that
biology will do the rest.

But nothing is ever that simple, and Soreya,
Esca and Ash will have to find their own way through the ties of
family and traditions to experience the full telepathic wonder of
the power of three…

Immune to both his shock and his highly
inappropriate question, the Oracle stared right through him, her
beautiful face disinterested. She was too deep in her trance with
the deities of their planet to care what he thought.

“
Esca
!” A hiss
behind him made him turn to see his father gesticulating wildly.
“Thank the Oracle, and withdraw!”

He bowed his head, but he couldn’t force
himself to say ‘thank you’. He stumbled down the marble steps
toward his parents, who hustled him away from the main hall of the
temple and into one of the side rooms. His mother was already
weeping, his father as pale as the stonework.

“
How can I be Second Male? I graduated
first in my class from military school! Everyone knows I have a
brilliant career ahead of me! How in frek’s name am I supposed to
bow down to another male?”

His father took a deep breath. “The Oracle
has spoken. We cannot go against the decision of the gods.” He
looked past Esca to the priestess who had come into the room behind
him. “My lady, do you have news of the male my son is to join
with?”

Esca turned his back on his father and
glared at the priestess. His graduation day was in ruins. He’d
always known he’d be in a relationship with two others; it was the
way of his people. But he’d assumed he’d be First Male, preferably
to two females, certainly not the inferior position of
Second
to another man.

The woman bowed, handed Esca a scroll, and
departed. He slowly unrolled the parchment and read the single
word.

“
Ash
?” His
father’s jaw literally dropped. “He’s the newest member of the
Senate. By the gods, if you are allied to him you will be
untouchable
.”

“
Not by him,” Esca snapped. “Who is
this man? If he’s on the council, he’s probably
ancient.”

“
He’s only about seven or eight years
older than you are.” His father’s expression was lightening with
every second. “He is
extraordinary
.” He turned to his wife who nodded
eagerly, and then looked back at Esca. “We would be proud to have
you allied to him.”

“
Let’s go home and discuss this
further.” His father wasn’t even listening to him
anymore.

Esca turned on his heel and started down the
stairs. In the entrance hall of the temple, a uniformed man looked
up and stepped forward.

The man bowed. “Ash would like to meet you. I
am here to take you to him.” He smiled at Esca’s parents. “I shall
return him to you before dusk.”

Esca didn’t bother to talk to the man
on the way through the city. What the
frek
was he supposed to say to this Ash guy? The
last thing his father had said before Esca had been escorted to the
limo was not to disgrace his family. How was he going to do that
when he’d been put in an impossible situation?

They arrived at one of the premier apartment
buildings in the city, and Esca was taken in a private elevator
that went up so fast he almost puked. The elevator opened onto a
narrow white-marble vestibule. His companion knocked on the only
door, and then led Esca through into a large room that was almost
all windows and offered a stunning view over the capital city.

When his driver disappeared, Esca focused his
gaze on the distant lights of the military base where he’d hoped to
begin his career. His throat hurt and his gut was tied in knots.
But he had to do the right thing—the reputation of his family
depended on it.

A slight sound behind him made him
turn. His gaze took in the long fair hair and perfect features of
the man who studied him with equal interest. And
frek,
not only was his face good to
look at, but his mind…The psychic power emanating from him called
to something deep inside Esca, made him want to move
closer.

Swallowing hard, Esca moved forward and fell
to his knees in front of the other man. He formally kissed Ash’s
fingers.

“
Thank you for observing the
traditions. I appreciate it.” Ash withdrew his hand. “Now will you
come and sit down? Let me offer you a drink. We have a lot to
discuss.”

Esca rose to his feet aware that although he
was as tall as Ash, he was already broader and would get even
bigger.

“
Take you straight to bed and ravish
you?” Ash’s smile was sweet. “That isn’t really my
style.”

Subsiding into the nearest chair, Esca waited
until Ash gave him a drink and took the seat opposite him before
saying. “You don’t want me?”

“
You’ve just graduated from military
school, and you’re due to attend the space academy,
correct?”

“
Then I suggest you go ahead and do
it.” He looked up and Esca noticed how blue his eyes were. “The
only difference will be that instead of going to your parents when
you’re on leave, I’d like you to come here. I’d like you to start
thinking of this as your home.”

“
I don’t understand.” Esca tried not to
scowl. “You could make me live here permanently, and stop me from
being anything but your mate.”

Ash raised his eyebrows. “Why would I do
that? Don’t you think you deserve to fulfill your dreams?”

Esca let out his breath. “I want to be the
best space fighter pilot our military has ever produced.”

“
Then do it.” Ash toasted him with his
glass. “We have all our lives to get to know each
other.”

“
Submit to another male?”

“
I can see why. From what I’ve read,
you have extraordinary potential both in the military and as a
psychic match for me.” He hesitated. “Do you feel that, at
least?”

“
That I’m drawn to what’s going on in
your head?” Esca nodded. “Yeah, I get that loud and clear. It’s the
other stuff I’m not so sure about.” He looked hastily down at his
empty glass. “I’ve never been in a physical relationship with a
male.”

“
I know, which is why I’m not pushing
that on you right now.”

Ash smiled. “One day, I hope you’ll come
willingly to my bed.” He shrugged. “I can wait.”

“
Congratulations, on your new command,
Major.”

Esca smiled at the assembled guests and
raised his glass to accept the toast.

“
Thanks. I always wanted to be a
fighter pilot, but apparently the military had other plans for me.”
He grinned at his assembled team. “I’m more than happy to lead this
new Special Forces unit.”

“
Good luck with that with this war
going on,” grumbled his cousin Trenx. “As captain of the ship
you’re going to be based on, I’ll do my best to keep you all
alive.”

“
Thanks. We appreciate it.” Esca turned
to Ash, who had come up behind him and was refilling his glass.
“We’ve got an early start tomorrow, so don’t give me too
much.”

Trenx groaned. “That’s right. We’ve got to be
going anyway.” He raised his voice. “All of you except Senator Ash
and Major Esca, we’re returning to base.”

“
Nope, you get the night off to
celebrate.” Trenx winked at him. “But be on board in eight hours or
we’ll go without you.”

By the time his shipmates and assorted guests
had been waved off, the caterers were done cleaning up and Ash had
disappeared. Esca thanked Chase, their housekeeper, and went
through to his suite to finally strip off his dress uniform. Even
though he scrubbed his dark hair twice and spent a long time in the
shower, he emerged wide-awake and aware that Ash hadn’t gone to bed
either.

He sat down on the side of his bed and
clasped his hands together. Since his last leave, he’d been
dreaming constantly about the other man, waking up hard and
wanting, imagining their limbs entangled, Ash moving over him…

He was twenty-six. Old enough to understand
the power the other male had over him and want to put it to the
test.

He’d never turned his back on a challenge but
this was damned hard. With a sigh, he got up, wrapped a towel
around his hips and headed back across the now- deserted main
living area to Ash’s bedroom suite. He knocked on the door and
waited until he heard Ash’s reply before going in.

His First Male sat in a chair by the fire.
From the look of his long damp blond hair he’d also showered. He
wore a white silk robe knotted at his waist and his feet were
bare.

He looked up as Esca entered. “Is something
wrong?”

Esca gathered his courage and went to kneel
at Ash’s feet. “I have a confession to make.”

“
You don’t want this assignment? I
can—”

Esca wrapped his fingers around Ash’s ankle.
“If you use your influence to protect me, I’ll bloody kill you.
It’s not about that.”

“
I can’t stop thinking about you.” Esca
managed to look up. “I kept wondering which of our guests you were
dating—or—or fucking, or—”

Ash touched his hair. “I haven’t fucked
anyone since we were formally mated.”

He shrugged. “I was convinced you would be
worth the wait.”

Esca groaned. “
Frek
, I wish I could say the same, I’ve fucked
way too many females. I didn’t know you’d
wait
.”

'Til Death (A Rebel Ridge Novel) by Sala, Sharon
The Dark Divide by Jennifer Fallon
Godplayer by Robin Cook
Enchantment by Lawna Mackie
WeresDigest by Desconhecido
ATasteofRome by Lucy Felthouse
OMG, A CUL8R Time Travel Mystery by Kat, Bob
The Music of Your Life by John Rowell
The Field of Fight: How We Can Win the Global War Against Radical Islam and Its Allies by Lieutenant General (Ret.) Michael T. Flynn, Michael Ledeen
ODD? by Jeff VanderMeer