Read The Price of Blood Online

The Price of Blood 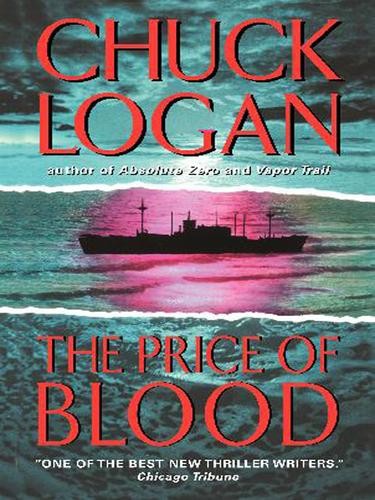 CHUCK
LOGAN
THE PRICE OF
BLOOD

And the chief priests took the silver pieces, and said, it is not lawful for to put them into the treasury, because it is the price of blood.

And they took counsel, and bought with them the potter’s field, to bury strangers in.

Wherefore that field was called, The field of blood, unto this day.

BROKER’S HOUSE WAS FALLING INTO THE RAVINE.

BROKER ATE A BOWL OF SPECIAL K, DRANK A GLASS…

HE TURNED OFF AT THE HINCKLEY EXIT AND WENT…

RODNEY HAD COME AND GONE, BUT NOT WITHOUT…

TABOR SCREAMED IN THE BACKYARD. A STAMPEDE…

BROKER DIDN’T WANT TO HEAR IT.

WHEN BROKER STARTED AS A ST. PAUL COP, HIS…

FOR ALL HE KNEW, THE HUE GOLD REALLY WAS A…

BROKER CALLED HIS FOLKS AND TOLD THEM HE…

BROKER CONFIRMED, AS THEY DROVE INTO DEVIL’S…

HE REJOINED IRENE AND NINA BY HIS CABIN AND…

“THEN ALL HELL BROKE LOOSE,” SAID BROKER. HE…

THE ANGRY SCREAM WAS NINA. THE GRUNT OF PAIN…

THE NORTH SHORE DAWN ROLLED THE FOG IN OFF…

THE NORTHEASTERN SKY WAS A PILE OF CUMULONIMBUS…

NINA JUMPED UP FROM A BENCH ON THE BACK…

NINA WENT INTO THE CABIN AND CAME OUT…

BROKER WAS HAPPY. IT WAS STORMING. HE HAD A…

THEY SAT ON THE FLOOR IN NINA’S APARTMENT…

BROKER HAS STEPPED ACROSS THE ORIGIN OF
…

THE WOMAN WALKED OUT FROM BENEATH THE BALCONY…

HE RETREATED FROM THE BALCONY AND THE HOT…

LOLA LEFT THE DESK, TURNED HER BACK ON HIM,…

BROKER PAUSED IN THE HALL IN FRONT OF A…

THERE WAS MUSIC, BUT HE DIDN’T HEAR IT. HE…

SHE CAME IN A CAB AND SHE WORE A LOOSE GRAY…

BROKER REMOVED THE BOWLING BAG FROM THE…

BROKER LEFT NINA WITH JEFFORDS AT THE POLICE…

BEVODE FRET WAS LET OUT OF A POLICE CAR AT…

BROKER SAT AT THE TABLE IN HIS CABIN AND…

NINA REMOVED A TUBE OF LIPSTICK FROM HER…

HE WAS NURSING THE DREGS OF A BEER WHEN NINA…

BROKER WOKE UP AND STRETCHED. FOR A WONDERFUL…

TWO OF THEM. THEY STEPPED FROM THE COVER…

THEY HAD A MAP. THE MAP WOULD DRAW CYRUS…

THE PLANE IS FULL OF PEOPLE WITH BLACK HAIR AND
…

A RED FLAG WITH A YELLOW STAR FLUTTERED…

NINA WAVED HER HANDS, CROSSED THE ROOM, AND…

THEY FROZE IN THE HALL, PARALYZED BY THE INNOCENT…

IN THE MORNING TRIN WAS GONE.

THE HOTEL FACED A TRAFFIC CIRCLE AT THE EDGE…

IT WAS WINTER IN HANOI WHERE BROKER STOOD.

BROKER BRACED HIS HIP AGAINST THE BUCKING…

THEY WERE ABOUT A MILE SOUTH OF QUANG TRI…

TRIN INTRODUCED BROKER TO TRUNG SI, WHO WAS…

WHEN IT WAS DARK THEY RUBBED ON MOSQUITO…

CYRUS LAPORTE WAITED ON THE GANGPLANK TO LA…

“IT’S ALL RIGHT,” SOOTHED BROKER AS HE CRADLED…

THE MARCH THROUGH THE DUNES TOOK FOREVER.

THEY WOKE UP TO A DAMP WHITE WORLD OF SAND…

BROKER DIDN’T THINK IT COULD GET ANY WORSE.

BROKER CONFRONTED THE PARADOX OF HOPE…

THEY WERE REUNITED WITH TRIN AT THE PIT. TRIN’S…

THE YEAR 2000 WAS FIVE YEARS AWAY AND BROKER…

AMERICAN ROCK-AND-ROLL DRIFTED DOWN THE…

Other Books by Chuck Logan

B
ROKER’S HOUSE WAS FALLING INTO THE RAVINE.

The problem was the sloping yard and the exposed limestone foundation that had pushed out in two of the corners. Spring rains had turned the mud basement into a storm sewer, and now a gravel-toothed ditch stretched from the foundation down to the ravine like an Okie’s Dust Bowl nightmare. This condition had undermined the back of the house and caused the buckled linoleum floor in the kitchen to pitch ten degrees and, back when he smoked, Broker could lay a cigarette on the table and watch it roll due east.

When he’d moved from St. Paul he’d bought the house for the lot, which had a clear view of the St. Croix River. Property was taking off in Stillwater and someday they’d pave the street and bring in city water and sewer to the north end. Someday he’d jack up the original 1870s row house, slap in a solid foundation, tear off the screwed-up kitchen addition and put in a real kitchen that some yuppies fleeing the Minneapolis-St. Paul Metro would pay big bucks for. Then he’d sell it and invest in the resort his folks owned up north…

But that was a retirement plan and, for now, grass went knee-high in the steep, eroded backyard and the neighborhood cats and nocturnal raccoons could prowl through it unobserved, while his crop of dandelions threatened to mutate into sunflowers. And the lilac hedges were headed for jungle and the rain had caved in the footings he’d put in to pave the dirt driveway.

His dust-busted ’87 Ford Ranger was parked in the back and angled downhill, trusting in the emergency brake and two cobblestones jammed under the front wheels to keep it from rolling off the lot.

On a mild spring morning in the last week of May, Broker opened his eyes, squinted, and figured that his life was headed into the ravine along with his house and truck.

Phil Broker, long divorced and never remarried, and with little visible means of support, rose late, threw cold water on his face, brushed his teeth, and did not shave. Barefoot, he walked his slanting stairs and floors down to the kitchen and put on water for coffee. While it heated he stared at the envelope from Publisher’s Clearing House that lay on his kitchen table and declared in two-inch type: WIN TEN MILLION DOLLARS!

As he spooned Folger’s instant into a cup and poured in boiling water he reminded the envelope that he didn’t need the whole ten million. Two hundred and fifty thousand was the figure he had to hit.

Still barefoot and wearing only a pair of jeans, he took the coffee into the backyard and sat in a patch of thin sunlight on a distressed metal lawn chair. Through the steam curling up from his coffee cup he studied a whimsical rainbow the sun painted in the gloomy pan of oil he’d emptied from his truck the day before.

Buck up, kid, his dad would say, you still got your health
.

Which was true. Broker looked younger than his forty-three years. He stood six feet tall and weighed 180 pounds and he figured that was just the right size for a man; being strong enough to stand your ground but still lean enough to run away. Barechested, with thick dark hair worn long and pulled back in a ponytail, he cultivated the aspect of a well-preserved biker who had almost turned to honest labor. His rugged face and neck and his arms below the biceps were T-shirt-tanned from working outside, in contrast to his torso and shoulders, which were pale, with plump blue veins marking the packed muscle. He’d spent a lot of time in the sun once and he didn’t associate tans with beaches.

His quiet green eyes were flecked with amber and deep-set below thick, striking black eyebrows that met in a shaggy line across his unlined forehead. Young children liked his eyebrows and tugged on them, reminded of a friendly wolf toy.

Three sips into his coffee, a car pulled into his driveway—too fast—and he heard the spitting gravel hit the peeling wood siding on his house. He sighed and added a few pennies of menace to his gaze and his eyes shaded to the color of a dirty dollar bill.

Rodney in his Trans Am had to lean on the gas one last time to hear the engine roar before he cut the ignition. Broker shook his head that it had come to this. He listened to the car door slam. Too loud.

“Broker? Where are you?”

Rodney, a world-class asshole who lifted weights at a health club, swaggered around the house with his pocked skin damn near orange from a tanning booth fire. He had short, spiky blond hair and fried video-arcade blue eyes. He looked around and said, “What a fucking dump.”

Broker had been to Rodney’s cheap condo in Woodbury. There was green fur growing in the swimming pool.

“You insured? I could torch it for you, no extra charge.”

“Bring the car back here.”

“First I want to see some money.”

Broker pulled a wad of currency from his Levi’s and dropped it on the peeling lawn table that, like the chair, was stricken with white paint leprosy. Rodney reached. Broker covered the cash with his hand. His square hand looked like he’d preferred to go without gloves last winter. Rodney judiciously took a step back.

“Bring the car around. Don’t take it out in the driveway on a public street,” said Broker.

Rodney’s derisive laugh sounded like birds burning up in high-tension wires. Again, Broker shook his head. More and more he had to deal with assholes like Rodney who failed to grasp basic emotional math or elementary physics. It genuinely frightened Broker that Rodney worked a day job as a machinist for Northwest Airlines. More and more, he worried that guys like Rodney were out there being air controllers or running the dials at nuclear power plants.

Rodney went back for his wheels and gunned down the drive and parked next to Broker’s truck. He got out and popped open the trunk.

“One Power Ranger’s toy,” said Rodney, throwing back a flap of olive drab army blanket and revealing the full auto, military M16A/203. The one with the grenade launcher grafted ominously under the barrel.

“Ammo for the launcher?” asked Broker.

“Three should be enough for the customer to see if the goods work. Take it or leave it. Got some other folks interested.” Rodney grinned his skin-cancer grin.

“I shit you not. These gang-bangers in north Minneapolis are up to battalion strength and put out some feelers.” Rodney’s grin broadened. “I said this magic word to them:
grenade
.”

“Bullshit,” said Broker. Rodney was in the reserves and liked to make with the military terminology.

“This deal sours, the future is over north,” said Rodney. By future, Rodney meant the many guns he intended to pilfer from Uncle Sam.

Rodney glanced at Broker’s shit-kicker truck and laughed. “Yeah, you best stick with your wood-niggers up in Stearns and Pine counties.”

“It’s their money. I’ll call you tonight, after six. I’ll set the deal for tomorrow at twelve noon,” said Broker.

“They coming down here?”

“I’m not giving them a choice. Bad enough I have to drive up thirty-five east with one machine gun. I ain’t doing it with five more of them.”

“Yeah, Rodney, you meet them and deal direct from now on. I’m not real hot on this gun stuff.”

Rodney strutted to the lawn table, snatched up the bills, and counted. He stopped in midcount, staring.

“It’s all there,” said Broker.

Rodney’s eyes jittered on two mourning doves that delicately executed a feeding ballet atop a birdfeeder set into the lip of the ravine. Unlike everything else in the overgrown, eroded yard, the feeder showed a caring hand, sanded and varnished and shaped with an elegant flair for craftsmanship. A zigzag stuck in Rodney’s eyes as he tried to extract a thought. Out of place.

“I got nothing against birds,” said Broker.