Read The Prophet of Panamindorah, Book One Fauns and Filinians Online 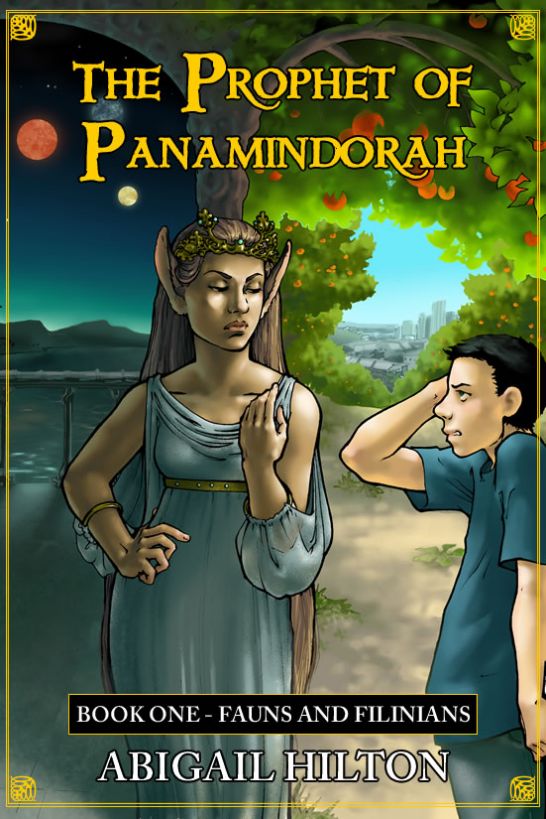 Book One: Fauns and Filinians

© 2010 Abigail Hilton. All rights reserved.
This eBook is licensed for your personal enjoyment only. This
material may not be reproduced, modified, or distributed without
the express prior permission of the copyright holder. Artwork is
displayed by agreement with the artists. All artists were paid for
their work and hold the copyrights to that work.

For Hughes, Jeff, and Amy.

Chapter 1. Voices in the Walls

Chapter 2. Music in the Dark

Chapter 4. A Conflict of Interests

Chapter 5. An Introduction to Wolflings

Chapter 8. Trouble for a Key

Chapter 11. Aspects of a Dinner Conversation

Chapter 13. The End of a War and the Beginning of a
Grudge

Chapter 5. The Curious Construction of a
Gallows

Chapter 6. The Road to Danda-lay

Chapter 8. The Sluice and the City

Chapter 9. A Meeting of the Inner Council

Chapter 11. Salt and a Book

Chapter 13. The Stone is Tossed

The Guild of the Cowry Catchers

Out of the Ashes

Shores Beyond the World 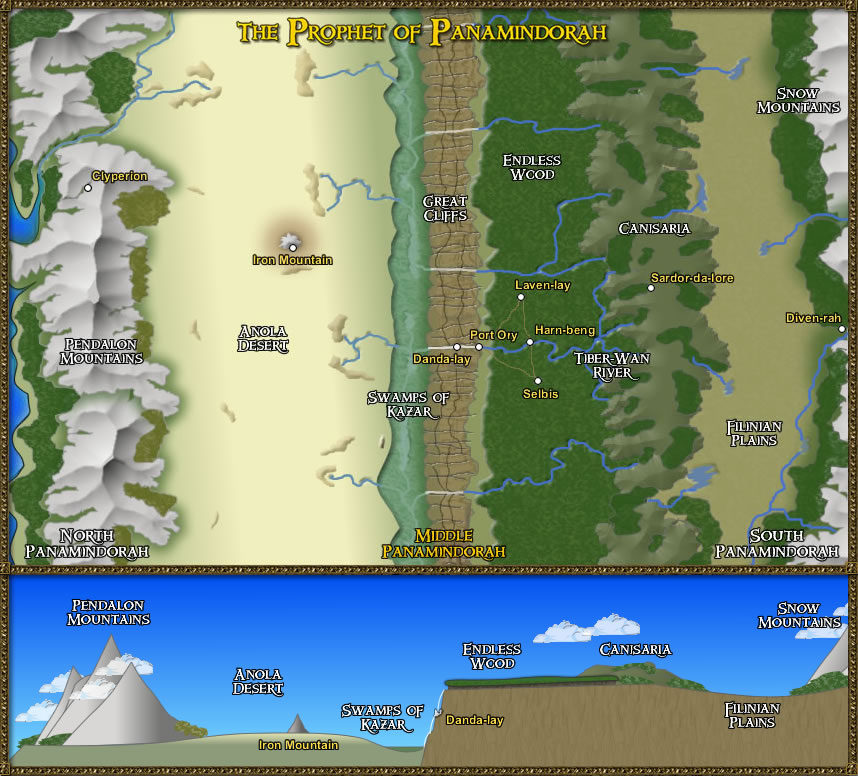 If you are viewing this map on a black and
white screen, I suggest opening it at least once on one of the many
color viewers or free desktop applications to enjoy it in
color.

Hope died with the day in the city of
Selbis. In the west the sinking sun bled color like a severed
artery, etching the shadows of parapet teeth on the red stone
walls. In a tower room of the great keep, the light fell across a
man, a wolf, and a tree. The man sprawled on a branch-strewn couch.
He held an enormous dagger, its cross-guard set with jagged
fragments of pearl, a strange pale jewel in the pommel. His other
hand clutched something on the end of a necklace. Sap oozed from
the torn branches beneath him, staining his white silk shirt and
black trousers. He lay as still as a waxwork, humming softly under
his breath, his clothes ruffling in the breeze that blew through
the open window.

A great black wolf lay on the floor,
watching him through dull eyes. He wore an iron muzzle so heavy
that he could barely lift his head. Blood glistened in the fur
above his shoulder blades. Sometimes he offered a growl in response
to the man’s humming, but the sound came weak and muted through the
muzzle.

The tree lay everywhere. It seemed to have
passed violently through the window, leaving scratches across the
walls and a dusting of loose mortar and fallen stone around the
sill. The sticky brown sap had a sweet, sharp odor. It had pooled
on the tiles and matted in the upholstery of the couch. The man’s
coal black hair had grown sticky with the tree’s blood, yet he lay
perfectly still and hummed.

At last, an eagle dropped through the
window. Its wings shot out to stop its dive an instant before it
the floor. The man sat up and sheathed the dagger at his belt. He
had pale skin and eyes as green as the leaves of the tree. He
smiled. “Morchella.”

The eagle shook its feathers. Its form
rippled and leapt up like an uncoiling spring. A woman stood in the
bird’s place, wearing a blue hooded robe. She tossed her head,
throwing back the hood. The wolf managed a growl somewhat louder
than before. The woman ignored him. She bowed at the waist. “They
are coming, my lord. The battle went poorly today.”

The man nodded. He did not seem surprised.
“How near the city?”

“They will be here before dawn.”

He stretched, graceful as a cat, and let go
of the necklace. The chain hung down in a sharp V, but nothing
appeared on the end.

“Gabalon,” said the woman, her voice losing
its formality, “the city is in a panic. I spoke with Denathar at
the gate. He is trying to keep the curfew, but soon he will need to
make good his threats. The citizens think the war is lost. They are
desperate to flee.”

The man twirled his dagger thoughtfully.
“They must not do that. Tell him to start executing the worst
offenders. They must fear me more than they fear wolflings.”

Morchella inclined her head. “He also said
that while the city panics, you have been wandering around the
forest tearing up trees.”

Gabalon laughed. “Yes, I have.” He looked
around in satisfaction at the half destroyed room. “Can you hear
the music bleeding from it?”

The wolf was growling again. He managed to
get to his feet, but he could not lift his head. “Poor Telsar,”
murmured Gabalon, “he was never good at bowing, but he is
learning.”

Morchella glanced at the wolf. “What else do
you plan for him?”

Gabalon walked to his prisoner. The animal
was large as a pony. It swung its iron muzzle, but Gabalon reached
down and caught it easily. “Even now, he does not know how to run
away.”

“You have what you need?” asked
Morchella.

He waved a hand. “I will know when I am
finished and not before.” He kicked one of the wolf’s feet from
under it, and the animal went down heavily on its belly. The muzzle
made a sharp clink against the tiles. “Take him back to the
dungeons. I’ll be down shortly.”

Morchella looked amused. “Will you not leave
him sane long enough to see the destruction of his army? That is
unlike you, Gabalon.”

“Oh, I think I’ll let him keep his sanity.
His music is so strong. Perhaps I will need it again. His tongue,
on the other hand, I can do without.”

The wolf jerked his muzzle, and this time he
caught Gabalon on a shin. The man’s hand descended with reptilian
swiftness to seize the wolf’s bloody ruff. Telsar clamped his teeth
on a whine. “They are already lost,” said Gabalon, “all your wolves
and wolflings. They think they have their teeth at my throat, but
victory will turn to dust in their mouths.” He bent close to the
wolf’s ear and purred, “I could not have done it without you.”

Morchella wrinkled her nose. “He stinks of
blood and filth.” She was searching among the leaves on the floor.
Finally she found the wolf’s collar and chain. “What of
Archemais?”

Gabalon stood and straightened his
sap-stained cuffs. “Ah, yes, you were not here this morning. We had
an attempted theft.”

Morchella’s eyebrows rose. “Of what?”

“Yes, and after this morning Archemais will
be too frantic over his own losses to worry about helping the rebel
army.”

Morchella gave a delighted laugh. “What did
you—?”

Gabalon waved her away. “Take Telsar to the
dungeon and my message to Denathar. I must begin the evening’s
work.”

He turned and walked to the window, shaking
the leaves from his clothes as he went. Without breaking stride, he
stepped onto the windowsill and over the edge. An instant later, a
huge winged shadow passed over the tower, blotting out the sun.

Chapter 1. Voices in the Walls

Historians have written
chapters or even books about the night Selbis fell to the cliff
faun armies. However, few historians devote more than a couple of
paragraphs to that night a hundred years before when Selbis almost
fell to the Durian wolves and wolflings. Lack of information
partially accounts for their silence. It was a curious
event—perhaps more legend than fact. However, some part of the
story must be true, for the Endless Wood derives its name from this
incident.

Some say the city floated. Some say it
gathered about it a moat of blue flame. Some say that Gabalon
polluted the air of the wood with a deadly plague. All agree on
this: Durian wolves and wolflings entered the wood alive—and
disappeared forever.

Corry ran a hand lightly along the library
wall. The director’s office was above this spot. He pressed both
hands against the plastered cement blocks. Sometimes he could do
the thing he was trying to do, and sometimes he couldn’t.
Please
work today.

No one had ever let him read his file. Corry
thought that was unfair, especially since he couldn’t remember half
of the events it contained. He could remember coming to the
children’s home, but that was back when his mind was still
slipping. He knew he’d arrived almost a year and a half ago.

That’s almost all I remember of my whole
life. But somewhere there’s a file that tells more, and somewhere
up there, someone is going to talk about it to strangers.

“A potential foster home,” the director had
said. These people were not looking to adopt him. Corry didn’t care
one way or the other. What he wanted was that file.

Corry pressed his hands harder against the
wall, probing for the tiny vibrations that would form…words.

“…
has never been physically violent to our
staff, but I cannot promise that he will not become violent, which
is another reason I will understand if you refuse.”

Corry thought that was the director, because
he’d listened to her in her office before. He couldn’t be sure,
though. People’s voices sounded different when he listened to them
this way.

“
He told us his name is Corellian. We’ve
been calling him Corry.”

The voice grew faint, and Corry shifted his
hands.

“
His condition improved with regular meals
and a calm environment. A few days after he arrived, he began
trying to speak to us, but he spoke a language no one could
understand. Now he seems to have forgotten it.”

Corry held his breath. Yes, that seemed
right. He remembered being frustrated with people when he first
came because they wouldn’t answer his questions.

The foster parents asked about abuse. The
director said she thought it certain. He waited impatiently while
the people upstairs speculated about cults and children kept in
solitude who invented their own languages.
That’s not what
happened to me,
he thought.