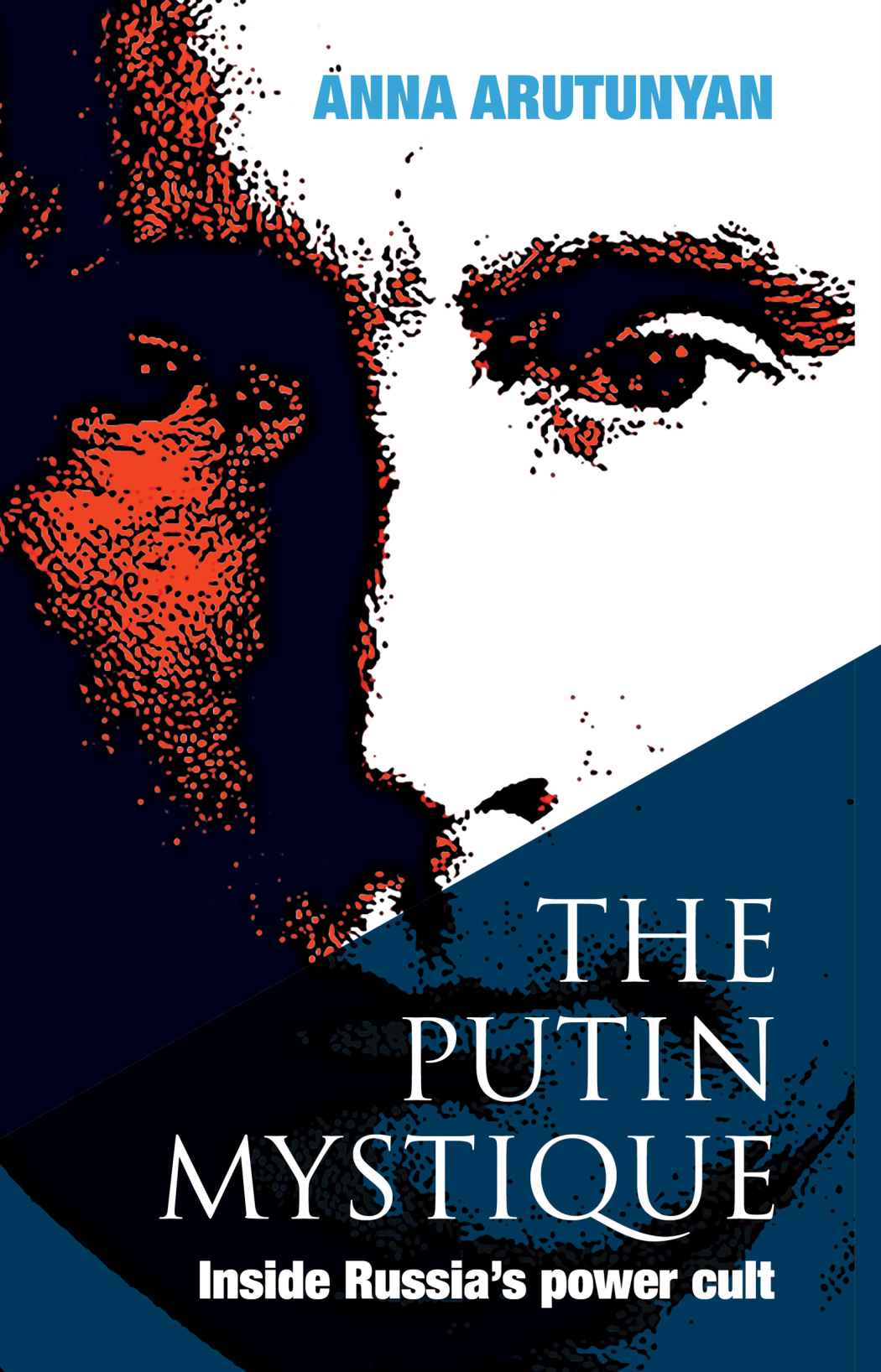 The Putin Mystique
takes the reader on a journey through the Russia of Vladimir Putin, named by Forbes magazine in 2013 as the most powerful man in the world. It is a neo-feudal world where iPads, WTO membership, and Brioni business suits conceal a power structure straight out of the Middle Ages, where the Sovereign is perceived as both divine and demonic, where a man’s riches are determined by his proximity to the Kremlin, and where large swathes of the populace live in precarious complacency interrupted by bouts of revolt. Where does that kind of power come from? The answer lies not in the leader, but in the people: from the impoverished worker who appeals directly to Putin for aid, to the businessmen, security officers and officials in Putin’s often dysfunctional government who look to their leader for instruction and protection.

In her writing career, Anna Arutunyan has travelled throughout Russia to report on modern politics. She has interviewed oligarchs and policemen, bishops and politicians, and many ordinary Russians. Her book, which has been translated into 10 languages, is a vivid and revealing exploration of the way in which myth, power and even religion interact to produce the love-hate relationship between the Russian people and Vladimir Putin.

“Why do so many Russians go on giving uncritical support to Putin? Arguing that Russians hold a quasi-religious respect for the state and its leader, this illuminating book delves into the intertwining of the sacred and the political in history and today.

Fresh vignettes of Putin in action illustrate both the supreme leader’s attitude to his subjects and their needs, desires and fears that make him the kind of leader he has become.”

”Anna Arutunyan’s book is an excellent description of Putinland, where corruption and the abuse of power makes Russia fall even further down the international corruption list, to Latin American levels.”

“Arutunyan gives the reader a fascinating history of Russian identity, with extensive use of the long strands of literature and history. … Arutunyan’s collection of stories is a dramatic eye opener on the Russian soul, with poignant stories about her own experiences during the large demonstrations since the Duma elections in December, when fear gave way to popular action”

“The Putin Mystique makes us wiser about a significant phenomenon in Russia’s past and present”.

The author’s rights are fully asserted. The right of Anna Arutunyan to be identified as the author of this work has been asserted by her in accordance with the Copyright, Designs and Patents Act 1988

All rights reserved; no part of this publication may be reproduced, stored in a retrieval system, or transmitted, in any form or by any means, electronic, mechanical, photocopying, recording or otherwise, without the prior written permission of the publisher. Nor be circulated in any form of binding or cover other than that in which it is published and a similar condition including this condition being imposed on the subsequent purchaser.

Cover and design by

Prologue: To give unto Caesar

PART I THE SUBJECTS

5.
Men of the Sovereign

7.
Agent Loyal and his Little Racket

PART IV THE SOVEREIGN AS GOD

I WANT THE President of the Russian Federation to decree what I should think, what religion to profess, where to work, the number of children to bear,
1
how to live, and when to die.

Depending on whether his most supreme instructions bring me profit or ruin, I will swear fealty to him as a guarantor of stability, or decry him as a ruthless despot, a gangster, a corrupt oprichnik.
2
For whether I am his vassal, his serf, his victim, or his foe, there is always the option of blaming him for the quotidian scurrying of life in this impossible country.

For ten years I have been recording the first draft of his rule, for readers who cared only about his nukes and his spies, and who asked endlessly, “Who is Mr. Putin?” – missing the point entirely, for there is no mystery in the “inimitable” stare of his “pale blue eyes,”
3
nor in the intent and the will that they may or may not conceal.

I have been in the presence of the sovereign on ten occasions. I have suffered his dreary aluminium stare for a total of about thirty seconds. My mind concealed no treacherous thoughts, no unpaid taxes, no unfulfilled obligations, and most of all – no unspoken ridicule – and thus did not shrivel in terror. I found no soul there, nothing “interesting”
4
at all. In fact, the closest approximation to what I saw when he stared at me for a few moments – as he would at a wallpaper decoration, after his bored, impatient glance flitted all over the room – was a reflection of whatever I wanted to see.

“Those who wanted to understand who Putin is have already
understood him,” his press secretary, Dmitry Peskov, told me cryptically, smiling under his moustache and staring that same aluminium stare. “Those who do not want to, well, they never will.”

No, the mystery lies with whoever that stare is directed at – be he a quavering official, a defiant journalist, a loyal or betrayed soldier, a friendly or corrupt businessman, or a harried petitioner, kneading his cap in his hands as he waits for his ruler to sort out his problems.

After over 20 years of transitioning towards democracy, with Putin having returned for a third presidential term that is to last six years, there is little doubt that democracy hasn’t really happened in Russia. There is also some consensus emerging that, with Vladimir Putin’s future looking increasingly shaky, democracy won’t simply “happen” when he departs. In the literature that seeks to understand why, one concept is being cited with increasing frequency: the country is described as being a dual state. Some, like Russia scholar Richard Sakwa, describe a country in the throes of a battle between a legal-rational and a neo-patrimonial state.
5
The sociologist Vladimir Shlapentokh has described Russia as a segmented society containing both liberal and feudal elements.
6
The lawyer and political analyst Vladimir Pastukhov has described compellingly a competition between an external and an internal state – if the external is a failed state of laws and political institutions, then it is the internal, with its religious, personified identification of state power (as opposed to the law) that has repeatedly interceded to rule the country, like a co-pilot stepping in for his partner who is drunk or sleeping.
7

In a legal-rational state, power rests with laws, institutions and the bureaucracy. Officials will often abuse their positions for personal gain, a phenomenon which is referred to as corruption and which exists, to various extents, in any country. When officials abuse their positions to the extent that the institutions stop functioning, the the country can become a failed state, a condition which usually presumes a collapse of governance. In a patrimonial state, power rests individually with the person of the leader; when the feudal element is introduced, it means that power also rests with an oligarch or a local or regional official who, to a large extent, can control a certain territory as a personal domain.

On the outside, Russia is governed by a legal-rational state. It has a system of laws, institutions and a bureaucracy that, at first glance,
struggles to govern the country but is abused to such an extent that Russia is in constant danger of becoming a failed state. On second glance, however, it becomes evident that those laws and institutions often simply clash with the reality on the ground. Whatever Russia has, it’s not a failed state because it’s not really collapsing – largely because the more fluid, informal, and often irrational system of patrimonialism kicks in to govern the country.

This book aims to take the reader on an inside journey through that modern patrimonial-irrational state that steps in to rule Russia: the inner government, unwritten and quasi-divine, whose unspoken rules and psychology are either concealed from, or misunderstood by, the Western world. To understand why that is the case, I examine how the citizens – or subjects – experience state power, and delve into the basic, primordial relationships between the people and their ruler that end up violating the legal-rational state.

What often emerges from those relationships is a startling propensity to deify supreme government authority and to inadvertently participate in a cult of power. Within the patrimonial state, where social roles are reduced to the relative strength or weakness of an individual, the central government, ever distant and perennially autocratic in its constant efforts to ensure order over such a vast land, is ascribed near supernatural powers, even in cases when it is actually weak and inefficient. This is not deification in the common understanding, it is far from the transcendent, religious worship of something benevolent and omnipotent. Rather, it is the acceptance of a force beyond influence, beyond logic. “State power, not law, holds a sacred status in Russia,” Pastukhov writes. Russians experience state power as a “mystical entity,” a “life-giving substance,” a “deity” that, in hardship, they will expect answers from. Whoever happens to occupy that sacred post can be simultaneously feared, admired, hated, or even ignored and ridiculed for inevitably failing to live up to that with which he has been endowed.

Vladimir Putin’s tenure has presented me with a unique opportunity to study these relationships and experiences. Obviously, as a journalist working in Russia during his rule, I have had a chance to report on his administration rather than someone else’s.

But the uniqueness stems from the fact that Putin, initially a small, soft-spoken, unimposing former intelligence officer, was never
naturally endowed with the charisma, ambition, or popularity that are typical of a successful patrimonial leader. He never led a coup to seize power, nor did he run the gamut of a political career, which would have allowed him to expand his base with successive elections. Instead, he found himself at the apex of Russian state power largely by accident in 1999, having been chosen by the moneyed elite surrounding President Boris Yeltsin, who named him as his successor and then hastily abdicated. Putin’s popularity, then, was swiftly engineered by political scientists loyal to Yeltsin’s administration in order to ensure a smooth transition of power. In the 2000 election, the Russian people largely (53 percent) accepted what they were told to – much as they would a new Tsar, even if he was handpicked by an exceedingly unpopular predecessor.

Painfully Ordinary Special Edition by Stephanie Amox
Wild Horse Spring by Lisa Williams Kline
What to expect when you're expecting by Heidi Murkoff, Sharon Mazel
Death of the Office Witch by Marlys Millhiser
The Costarella Conquest by Emma Darcy
Fledgling (The Vampire Manifesto, Book Two) by Bell, Rashaad
For Her Protection: 1 (Personal Protection) by Amber A Bardan
Secrets and Lace: A Dark Romance Thriller (Fatal Hearts Series Book 1) by Dori Lavelle
In Deep by Damon Knight
The Historian by Elizabeth Kostova