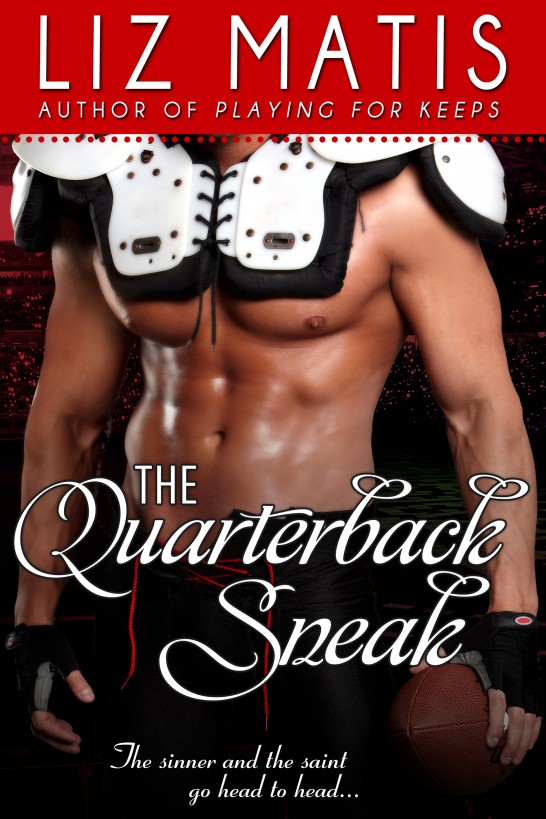 All rights reserved. No part of this book may be
reproduced or utilized in any form or by any means, electronic or
mechanical, including photocopy, scanning, recording or by any
information storage and retrieval system now known or hereafter
invented, without permission in writing from the author.

This is a work of fiction. Names, characters, places
and incidents either are products of the author’s imagination or
are used fictitiously. Any resemblance to actual events or locales
or persons, living or dead, is entirely coincidental.

Keep in Touch with Liz

Other Books by Liz

Going For It – print, eBook and audio book

RT Book Review:
Readers will
get a kick out of these characters as they walk through a world of
fashion and celebrities and soak up all the glitz and glam that a
wild child and a bad boy could possibly provide.

Love on the Book Shelf:
Don’t hold this book too tight-you-you’ll burn your fingers. It’s
also the perfect just-before-bedtime reading, if you’d like some
nice, sultry dreams.

ReRead:
Totally worth
it.

RT Book Reviews:
Playing For
Keeps is entertaining … an engaging storyline will keep
readers turning the pages … readers will enjoy the unfolding
relationship and anticipate the sequel featuring the secondary
characters

Book Junkie:
In Liz Matis’
latest from Little Hondo Press, Playing For Keeps you will get a
wildly sexy romance with depth and laughs. A page turner, bring on
the sequel.

Going For It – Fantasy Football –
Season 2

RT Book Reviews:
Readers
will wholeheartedly enjoy the cat-and-mouse game the main couple
plays. Expect a large dose of spice, surprises, and a story that’s
perfect for the front page of a tabloid. The sequel to Playing For
Keeps is a touchdown!

Book Junkie:
I loved GOING
FOR IT because falling hard and fast for two witty, feisty and
completely honest characters that do nothing if not capture your
heart and take you on the wild ride that is their love story.

beyond what the world thinks

in my eyes, she is

with my heart, she is

I see with my heart

Liz Matis – as told to by Liam McQueen

L
iam McQueen knew he
shouldn’t be inside Martini Madness or any place that served
alcohol. Two years, one month, three weeks, five days sober. And
celibate. Though going without a drink had proven more difficult
than laying off the women. Alcohol had been his mistress, and he
still heard the siren calling to his weak soul. He fortified
himself with a prayer as he maneuvered through the club.

Three of his offensive linemen surrounded
him, fiercely guarding their quarterback’s body as if they were
still on the football field. Tonight Liam was returning the favor,
protecting his teammates as their designated driver and general
all-around babysitter. It wouldn’t help the New York Cougar’s
upcoming season if one of them landed in jail.

Upon reaching the club’s swanky VIP section,
his buddies beelined for the decorations—the pretty women let
inside as bait to lure wealthy men into dropping serious cash. Liam
had his fill of groupies and party girls. Deserted, he found an
empty bar stool and looked around.

The glass-enclosed area allowed the music to
filter in at a level that encouraged conversation, yet let the
wannabes outside the glass feel like they were part of the scene,
where D-list celebrities mingled with pro athletes.

From his spot, Liam had a front-row seat as
he watched his largest lineman fumble a play on a hot redhead. Poor
schmuck. Maybe he should help Murphy out and be his wingman for the
night.

“What’s your poison?” asked a sultry voice
from behind the neon-lit bar.

Poison.
Liam almost laughed at the
truth in the word. The name of his favorite Scotch burned on his
tongue.

Spinning his stool back around, he faced the
bartender, a hot blonde with big boobs spilling over her low-cut
shirt. She flashed him a smile bright enough for a
whitening-toothpaste commercial. Three years ago, he would have
simply nodded toward the nearest bathroom, and faster than it took
him to call an audible on a play, they would have been going at it
like a pair of drunken monkeys. His former self disgusted him.

All he wanted now was a nice girl to settle
down with. A nice girl who liked sex, he amended.

“With?” The suggestive hint in her voice
left no doubt of her interest in him.

“Yeah, it sure is.” But if he hadn’t gone
off the wagon after single-handedly losing the Championship seven
months ago, then he wouldn’t take a drink now. Not even the daily
reminders of defeat—fans who taunted him on the street—could break
his resolve. His response at least seemed to shut them up
effectively.
You’re right. I suck.

The New York fans were a fickle bunch. With
a single throw, they’d forgotten how after Todd, the Cougars’ star
quarterback, had broken his leg, Liam had stepped in to lead them
to the big game. Would the Cougars have won the Championship if
Todd still had been the quarterback? According to social media, the
answer was a resounding
yes
.

Apparently the team’s management agreed.
Otherwise Liam wouldn’t have had to compete with Romer, the
Cougars’ number-one draft choice, for the starting position. A
competition Liam had won. For now.

And he couldn’t even celebrate with a
toast.

Turning his head toward a commotion at the
VIP entrance, he expected to see a major celebrity. But it was just
another washed-up reality star. The team owner’s hellion of a
daughter, Hayden Middleton, had arrived with her entourage in
tow.

An off-the-shoulder red cocktail dress
hugged the tabloid darling’s every curve, like she was channeling a
plus-sized Jessica Rabbit. Even her long, cinnamon-brown hair was
swept to one side. Wearing ridiculously high heels, she probably
could meet Liam’s six-foot-three gaze head on.

He swiveled his stool, resting his elbows on
the bar rail behind him and watched her approach.
Damn.
She
was going to walk right by him like he didn’t exist. “Hey,
Hayden.”

Without missing a beat, she turned her head.
“Hey, loser.”

“Ouch.” He grabbed his chest as if she’d
struck him in the heart with an arrow. Yet it wasn’t her comment
that stung. Those robin’s-egg-blue eyes landed a sucker punch to
his gut every time she looked his way.

As she strolled by him, his gaze dropped to
her sashaying backside. The judge should have sentenced the spoiled
brat to a good solid spanking instead of yet another probation. His
cock hardened painfully at the thought of carrying out her
punishment himself. Hayden starred in his fantasies way more often
than he’d like. Okay, so maybe staying celibate was more difficult
than staying sober. One always seemed to fuel the other.

Where the mind leads the body will follow,
he reminded himself and he looked away. At this rate, he’d be
praying for salvation tomorrow instead of focusing on football
practice. And when it came to Hayden Middleton, he’d be consorting
with the devil’s handmaiden. Not that consorting was the problem.
The woman hated him, which he supposed made things easier. Less
tempting
…

Dear God, he wanted a drink.
A Scapa
Scotch
. Wanted to swirl the autumn-gold liquid, inhale the
honeyed fragrance, savor the sweet smoothness, feel the cool burn
down his throat and then the blessed relief as the warmth spread to
every part of his body.

As he glanced at Hayden again, he crushed
the empty Red Bull can, then deliberately looked away. He liked to
think he had mastered his addiction. That he had control. Sometimes
he’d order a drink and then walk away from it, thinking he’d won a
small battle of what would be a lifelong war.

A sudden roar of voices jolted him out of
his pity party. His teammates were egging on two men who were nose
to nose, shouting at each other, and there was Hayden adding her
two thousand cents in. When the shorter guy’s suit jacket flapped
open, revealing a gun, Liam tossed a hundred dollar bill on the
bar.
Time to go.

In a flash he reached his unaware teammates.
“We need to get out of here.” He placed a hand on Hayden’s
shoulder. “You too,” he told her.

Elbowing him in the gut, she tried to wedge
herself between the two guys. She shot Liam a look that made it
perfectly clear that she could take care of herself. Besides, it
was her entourage causing the trouble. None of that mattered,
though. He owed her father for giving him a second chance when no
other team in the league would.

Out of the corner of his eye, he caught a
glimpse of the shorter guy’s hand reaching for the gun. “Out,” he
ordered again.

This time his teammates took off.

With no time to argue, he threw Hayden over
his shoulder in a fireman’s carry. Tuning out her protests, he
plowed toward the exit while doing his best to ignore the bodacious
booty inches from his face. There was going to be hell to pay.

And Liam couldn’t afford the price.