Read The Queen of Cool Online

The Queen of Cool 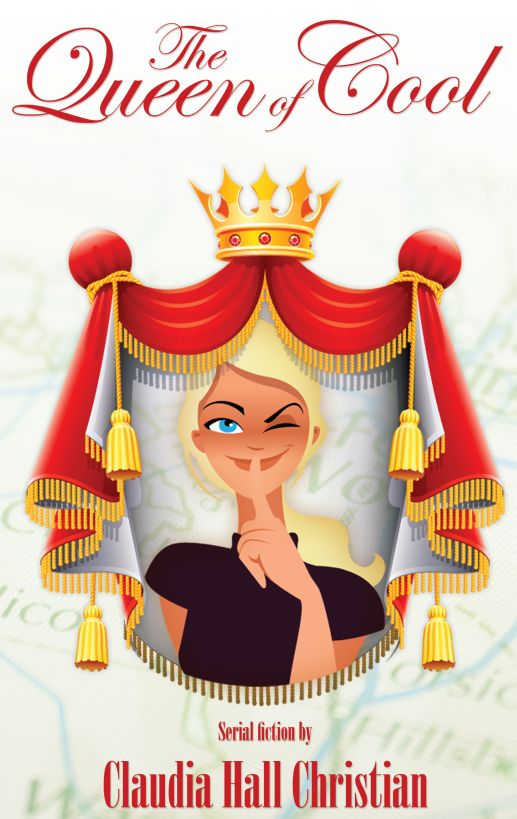 THE QUEEN OF COOL

A serial fiction by:

THE QUEEN OF
COOL

Thank you for purchasing this ebook! You are
welcome to share it with your friends. This book may be reproduced,
copied and distributed for non-commercial purposes, provided the
book remains in its complete original form. If you enjoyed this
book, please return to Smashwords.com to discover the Alex the Fey
thrillers, sweet and crunchy Denver Cereal and other works by
Claudia Hall Christian. Thank you for your support

This is a work of fiction. Names, characters,
places and incidents either are the product of the author’s
imagination or are used fictitiously.

Asleep, Loraine Downs waited for him to
say:

“
Shug, you stay right here.
I’ll go see who it is. Probably just the kids.”

Her unconscious mind waited to feel him get
up from their bed, put on his pants, and move through their River
Crest home. She waited to hear the front door open downstairs,
Don’s deep Texas drawl, and his eventual return to their bed.

She waited to ask him: “What was that?”

Lo jerked into consciousness. Something was
terribly wrong.

She reached for him but found a leather
bucket seat in his place. Her head turned to look for him. The seat
was empty. Confused, she looked down at the photo album on her lap,
her black silk suit, ruined black stockings, and the steering
wheel.

Lorraine raised her chin. Peering through
the smudged windshield, the horror of the last week came rushing
forward.

Don was dead. His funeral was today. As if
her mind had touched a hot coal, she retreated from any thought of
Don’s death. But the overwhelming tsunami of emotions continued to
flood forward.

She’d arrived home from the burial to find
that the bank had foreclosed her home – Don’s home; their home.
She’d called Don’s lawyer but he knew nothing about the
foreclosure. She’d begged the Tarrant County Sheriff’s Deputy to
let her at least get her wedding album. While she wept on her front
porch, he’d made some calls. Finally, he escorted her to get her
wedding album and only her wedding album.

She hadn’t worried. She was pretty sure she
could get in when he left. After all, she’d spent almost fifteen
years in that house, she knew how to get in and out of it. She
pulled her Lexus around the corner onto Clarke Avenue. When it was
dark, she tried to sneak back to the house.

During the three-hour tribute and, finally,
the burial of the love of her life, someone had changed all the
locks. They had even fixed the basement window the girls had used
when they wanted to sneak out to party with their friends. Unsure
of what else to do, she sat on the swing under the big elm tree in
their backyard. She wasn’t sure how long she’d sat there. A long
time.

Another Deputy Sheriff arrived. He hadn’t
given her a ticket for trespassing. He just escorted her from their
backyard. While she cried, he’d locked the gate with a padlock.
Turning back to her, he saw something across the street. Lo
followed his eyes to find Don’s vicious ex-wife, Sue Ellen Carr,
standing there. Her mouth opened to shout something. Before her
words could reach them, the Sherriff’s Deputy began a loud
monologue about all the laws Lo had broken by sitting on that
swing.

He had grabbed Lo by the elbow and marched
her back to her car. He’d waited for her car to start and watched
Lo take off. Lo drove through their neighborhood for a while and
finally returned to her spot on Clarke Avenue.

“
Lo!” a man’s voice yelled.
His hand patted the window.

“
What can I do for you
officer?” Lo asked. Her eyes blinked at the bright light in her
face.

“
Your neighbor called the
Sherriff’s department seven times and the Fort Worth PD six times,”
Lo’s elder brother Larry said. “Witchiepoo says there’s a vagrant
sleeping in a car on Clarke Avenue. One of my buddies ran your
plates. He called me, and I came to get you as soon as my shift was
over. What are you doing?”

Larry lowered his flash light. Reaching
through the window, he hugged his sister. Her tear-wet face pressed
against his black FWPD uniform.

“
Yeah, I’m not competing
this year,” Lo said. “I don’t have to diet until the next photo
shoot for my Nike contract.”

Lo looked up at her brother. His familiar
face was the first thing that had made any sense since she’d got
home from the funeral. She nodded.

“
Just in case you have a
Molotov cocktail in there, I’ll follow you,” Larry said.

“
You know which one,” Larry
said. “You look like crap. I’ll order while you clean
up.”

Lo gave him a smile and drove. She got to
the end of the block before he caught up with her in his Fort Worth
PD cruiser. It was a little less than three miles from her home –
Don’s home; their home – to where she grew up. Fourteen years,
seven months, and four days later, she returned.

Driving down Hemphill, she passed through
the intervening years as if they had never happened. She’d never
babysat Don’s kids, met him, married him, and built an amazing life
by his side. Standing barefoot in the Whataburger parking lot, she
felt like the same impulsive mess she was all those years ago. She
reached into her car and pulled out her black heels and her purse.
She stopped walking to let Larry’s cruiser pass and then continued
into the restaurant where she made a beeline for the restroom.

Standing in front of the bathroom mirror, Lo
assessed the damage. She’d lost weight. Her skin was pale and
sallow. Dark circles had appeared under her eyes. Her blue eyes
were swollen and bloodshot. Lo washed her face and stumbled around
the bathroom looking for the towel dispenser of her youth. She
groaned at finding the loud hot-air hand-drying machine. With
mechanical efficiency, she washed her face again – lather and
rinse; lather and rinse. After the third time, she stopped and
looked into the large blue eyes the photographers loved. While the
mascara streaks had disappeared and her eyes were less swollen, she
couldn’t erase the stunned look from her face. By the time she left
the bathroom, Larry was waiting for her with a pile of food on the
table.

“
When was the last time you
ate?” Larry asked.

“
Don took me to Café Modern
last Friday,” Lo sat down across from him. “He had the ‘Surf and
Turf’, of course, and I had the salmon. We drank a bottle of red
wine and laughed our asses off.”

“
Last Friday? A week ago
yesterday?”

Lo nodded. Larry pushed a burger at her and
bit into the one in his hand. Intending to just take a bite, Lo bit
into the burger and realized how hungry she was. She finished the
burger, then another. She washed the food down with a healthy
swallow of Dr. Pepper.

Larry smiled and went to order two
milkshakes. He gave the chocolate to Lo and sat down with his
vanilla shake.

“
And now everything’s
gone,” Lo said. “I can’t wander from room to room remembering. The
bank won’t let me. I was able to get our wedding album. That’s all
I have. After all this time, that’s all I have. Our
beginning…”

Larry’s eyes watched her face while he
sucked on the milkshake.

Larry spit up his milkshake. Choking, he
coughed until he was able to catch his breath.

“
Do you think he loved me?”
Lo repeated.

“
Adored you. Obsessed with
you. You guys were…” Larry shrugged. “Amazing. Like a fantasy.
Everyone wants what you had, but no one gets it. Everyone wanted to
be around you all, just to catch some of the sunshine. Sure some
people were jealous, but most of us…”

“
Then why was he with her…
that woman?” Lo asked.

“
We don’t know what
happened,” Larry said. “The Medical Examiner is waiting on a tox
screen. That faith healer isn’t supposed to leave town until the
tox screen comes in.”

“
We only had one set of
accounts,” Lo said. “The bank froze everything today, while Don was
being buried. They froze everything with his name on it. The lawyer
can’t even figure out why the accounts are frozen and the
house…”

Lo hiccupped back a sob. Larry reached
across the table to hold her hand. Their eyes held for a
moment.

“
My life is… over,” Lo
said. “Don was… everything and… I stayed until after they lowered
the coffin, you know. I stood there wanting to throw myself into
the hole. I wish I had. If I had known that my entire life with Don
would be flushed away, I…”

Sáfico by Catherine Fisher
Delilah Devlin - My Immortal Knight 03 by All Knight Long
Love, Lies & The D.A. by Rohman, Rebecca
Discovery (Hybrid Book 1) by Emma Jaye
The Next Season (novella) by Rachael Johns
The Fairy Gift by J.K. Pendragon
Capitol Threat by William Bernhardt
4 Decoupage Can Be Deadly by Lois Winston
Illusions II: The Adventures of a Reluctant Student (Kindle Single) by Richard Bach
Garden of the Gods (The Immortals Series Book 3) by S.M. Schmitz