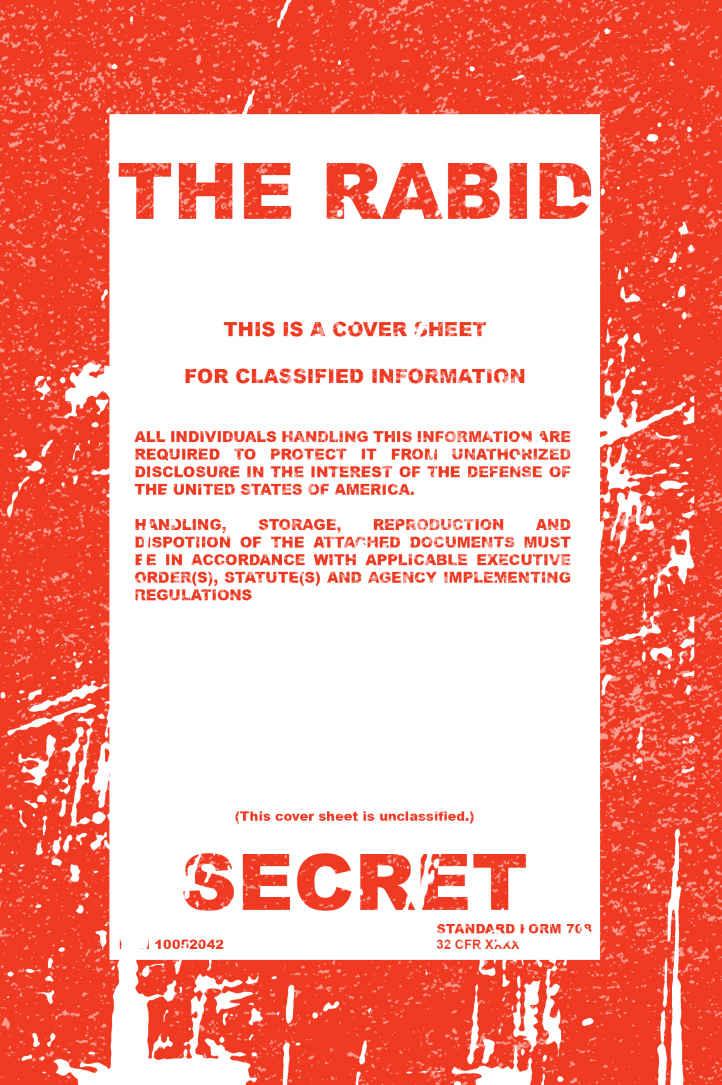 AT APPROXIMATELY 16:00, THIS OFFICE RECEIVED A
TELEPHONIC COMMUNICATION THAT TWO JOURNALS WERE RE COVERED NEAR JOHNSON
VILLAGE, COLORADO FOLLOWING INCIDENT
[REDACTED]
.

JOURNALS BEING TRANSPORTED TO
[REDACTED]
FOR EXAMINATION. ATTACHED DOCUMENTS
ARE CLASSIFIED SECRET. NO FURTHER INVESTIGATION BEING CONDUCTED.

The Department of
Defense urges the public to complete the report for the purpose of safety
precautions in lieu of a second medical epidemic.

The Department of Defense would like to
acknowledge the following individuals for their support in creating and funding
this report.

Mr. Jimmy
Franks
- Singer and Songwriter for
The Bloodhound Gang

In memoriam of Miss Alexandra (Lexi)
Brown
for her continued dedication and support
of this and many other projects.

From the
Desk of Dr. Lisa James

My son was too busy
looking out the car window and watching the fiery-colored trees sweep by to
notice anything was wrong.

I looked at the
blood stain on my blue scrubs. I needed a distraction, so I turned my attention
back to the road. I'd left the hospital immediately after an infected patient
had bitten the surgeon. They were moving closer and closer.

I hit the
Seek
button on my radio again, watching it fly through the channels, trying to find
a station broadcasting
anything
. But all I got was static and one classical
music station. Up until about an hour prior, there were still a few news DJ's
talking about the outbreak.

Just last week, Rex's
father had been bitten when he was trying to get to my house. He came to the
door, scratching the bite wound on his forearm. It was already starting to become
red and swollen. After two days, he became extremely thirsty, but the muscle
spasms in his throat caused him to fear any water I offered. The day before,
he'd turned.

I winced at the
sudden twinge of pain that tore through my ribs. My body had been slammed into
the dresser when I'd tried to save my son from his rabid father. I'd fought him
a little, but he was stronger. So, I did the only thing I could think of doing;
I grabbed a nearby vase and smashed it over his head. He was dead.

But I didn't
murder the father of my child. I killed one of
them
.

On the right, a
McDonald's was coming up fast. I was feeling hungry, but I knew there'd be no
one there. I'd probably never eat a Big Mac again. The golden arches swept by
and Rex started to whine.

"Hungry!" he
said, pointing out the window.

"No. I told you
we can't stop until we get to Aunt Sylvia's."

"But, momma! Hungry!"
I could hear the tears in his voice and adrenaline pumped into my veins. I'd never
be able to offer him his favorite fast food again. His childhood was taken away
from him and he didn't understand why.

"I'm sorry, Rex,
I'm sorry." I felt tears threatening to escape my own eyes. "But we can have ice
cream when we get to Aunt Sylvia's, okay? Would you like some ice cream?"

His little round
face scrunched, trying to decipher my tone. "Okay, momma."

At least I'd
diffused one stressful situation. I turned back around to face the road just as
another presented itself. The silhouette of a male was lumbering across the
asphalt about a mile in front of us. I pressed down on the gas, watching the
speedometer crawl up past seventy. The car"s engine whined. Rex began to
fidget.

"Everything will
be okay, Rex. Just close your eyes."

The infected
victim was inching closer. I could see it turn to look at the car. It started
to lumber toward us, dragging its feet and pulling at its hair. The speedometer
went up to eighty. It was closer.

Instinctively, my
foot slammed down hard on the brake. The car swerved onto the opposite side of
the empty road, narrowly missing the diseased thing that was once a human
being. It dragged itself near the car. I could hear it gurgle and groan. When
it started hitting its fists against Rex's window, my son scooted away, but
didn't look up.

"what's wrong
with him, momma?"

"That man is very
sick."

The thing was
sliding its way toward the passenger window now. It clawed at the glass, trying
to get inside. I turned the key in the ignition; my car had stalled when we'd
skidded. It clicked, but the engine didn't turn over. I'd been meaning to take
it into the shop to get it looked at, but things were crazy at work, and I'd
never had a chance. I'd never have a chance again, either. And it was just too coincidental
that it decided to die on me then.

"Start!" I slammed
my fists into the wheel. The thing pounded harder at the window. If only I were
a doctor of cars and not medicine.

I'm sure Rex felt my fear
and frustration. He was succumbing to sensory overload and I couldn't do a damn
thing to help him.

As he started to whine,
the thing outside slipped back to his window, scratching at the rubber frame
and tearing the nails from its fingers. Blood streaked across the glass. Rex's
face was turning purple. The engine still wouldn't start. My heart pumped
harder.

The key turned
and the engine roared to life. I stepped hard on the gas, nearly fish-tailing.
The back end of the car hit the thing as we started to drive, knocking him onto
the road where he howled. That was the first time I'd ever heard one of them
howl. It was such a sad sound.

"Rex tried to stop
crying. He tried so hard to be quiet and still the rest of the trip. He was so
well-behaved. My chest grew tight. I hand't meant to scare him.

After only thirty more
minutes, we pulled off the highway and into my best friend"s hometown. She
lived in a town called Soledad right off the 101. Her street was entirely
deserted. There weren't even any of those things around. I was certain the
outbreak had reached her.

I pulled into Sylvia's
driveway. After I'd shut the engine off, I sat there and realized I had no
plan. What was I going to do if I got out and one of those things came out of
nowhere? The car was enveloped in silence.

I jumped. Looking
in the review mirror, I smiled weakly at my son. He looked so frail and small
with his hands tucked under his chin.

When I heard my
name, I snapped my gaze around. Sylvia was standing on her front porch, waving
for me to come inside. Without another minute"s hesitation, I jumped out,
rounding the back and unbuckling my son from his seat.

I hefted Rex into
my arms. He begged me to let him down so he could walk on his own, but I
refused. I wasn't going to let him run off. I reached Sylvia and she ushered us
quickly into the house. Then, she spun around to bolt the door shut.

Leaning down, she
patted Rex's head. "Hey, Kid. How about some ice cream, yeah?"

He bobbed his
head.

"Lexi's having
some right now. Go get her; she's in the kitchen."
Rex hobbled off toward where Sylvia had pointed. I started to go after
him, but she put a hand on my arm.

"where's Chase?"
she asked, referring to his father.

At first, her
eyes welled with an emotion I couldn't recognize. It looked like guilt, but
felt like panic. But then, she nodded. "I'm sorry, Lisa."

The panic
subsided into a look I knew well. She was frustrated at my lack of empathy. She
sighed. "Did you hear any news?"

"Not a thing." I shook
my head. "All the radio stations are down as of an hour ago."

"that's what I
thought. Last I heard it had spread as far as you guys. I was so scared that
you'd been...infected."

"Why aren't there
any here?" I allowed her to lead me into the kitchen. Rex was already munching
on some vanilla ice cream with Sylvia's twelve-year-old, Alex. I ran my fingers
through his fine, dark hair.

"Dunno. They said
it hasn't come this far yet. But I saw some people heading down the street this
morning. They told me they were moving out of the apartments downtown because
they were afraid it was coming. I don't know what they thought they were gonna
do this way."

I stayed silent.
It was all I could do.

Surprised, I
looked down at my son, ice-cream dripping from his chin and covering his hands.
Sylvia moved away to get me a damp cloth. "Yes?"

"Lex got a new
doll for her birthday and I gonna play with it!"

"Oh?" I glanced
over at Alex. He still wasn't able to say her name right.

"Yeah. it's just
a teddy bear, but some of its stuffing is coming out of its head," Alex said.

"I think it
reminds her of one of them." Sylvia swept over to wipe the ice-cream from Rex's
mouth and hands. I took it from her. It was my job to take care of him.

"Can I have now,
momma? I want play." He watched me with dark eyes. Those were the eyes of his
father. I ruffled his hair as I stood.

"Yes." I handed
the towel back to Sylvia.

The two of them
ran off up the stairs while my best friend and I stayed behind in the kitchen. Tiny
footsteps echoed from the hallway until they could be heard overhead before
coming to a silent stop.

Sylvia shook her
head. "Only on the news reports. But they stopped broadcasting yesterday. it's
still spreading, isn't it, Lisa?"

She looked me up
and down. "You need to change out of those scrubs."

"Before the
broadcasts went down, did you hear something about a place called Braycart City?"

"it's supposedly a
sanctuary for people who aren't infected. There is a doctor there who's trying
to develop a vaccine. We can go there."

"Where is it?" Sylvia
wondered.

"it's in a town
called Johnson Village, Colorado."

"Jesus." She
hugged her arms around herself.

"We should get
going pretty soon, Sylvia. Who knows how long it'll be before they come here."