Read The Rags of Time Online

The Rags of Time 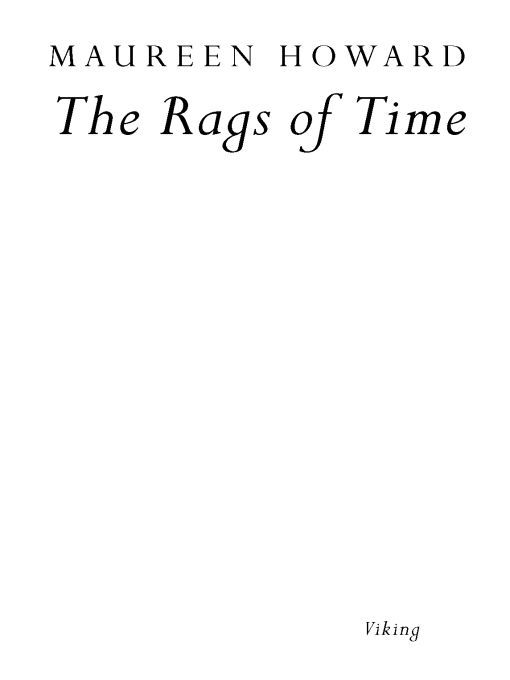 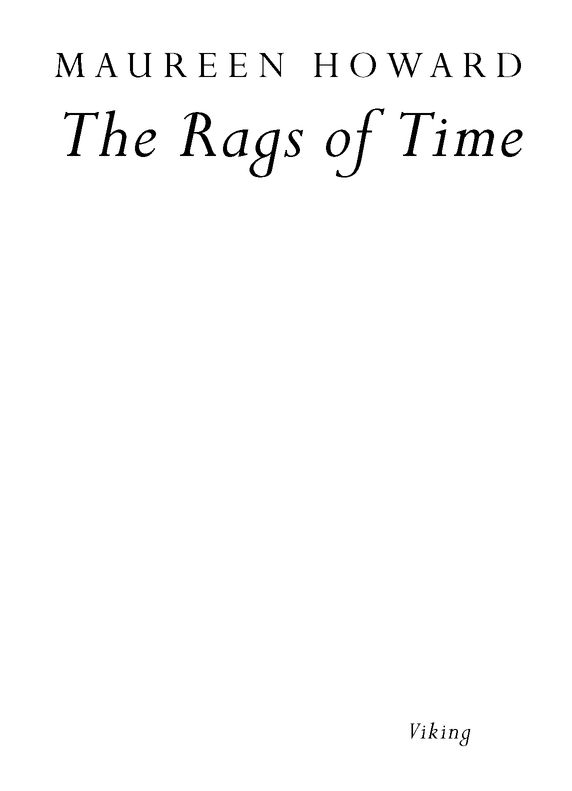 To Mark, and to Nicholas Howard Fudge—time bends
Acknowledgments
My family—husband, Mark Probst; brother, George Kearns; daughter, Loretta Howard, incalculable thanks for their support and correction. Richard Powers for his generous editorial reading; James Longenbach and Joanna Scott for their care and honesty with a work in long progress, this last of my Seasons. Binnie Kirschenbaum for her spirited commentary. My agent and friend, Gloria Loomis, patient with me over the years; and Paul Slovak, my gifted editor, at once exacting and imaginative. I am indebted to Jeri Laber, Patrick Keefe, Mohammet Yildiz, Harish Bhat, George and Sonya Tcherny, Cleo Kearns, Brenda Maddox, Ann Weiss mann, Ed Park, Paul La Farge, Bradford Morrow, and to Drs. Iris Sherman and Mary Anne McLaughlin for their consultation; to the Mercy Learning Center for letting me camp on their porch, and the Bogliasco Foundation for a residency at the Villa dei Pini.
Love, all alike, no season knowes, nor clyme,
Nor houres, dayes, moneths, which are the rags of time.
—John Donne, “
The Sunne Rising
”
Central Park 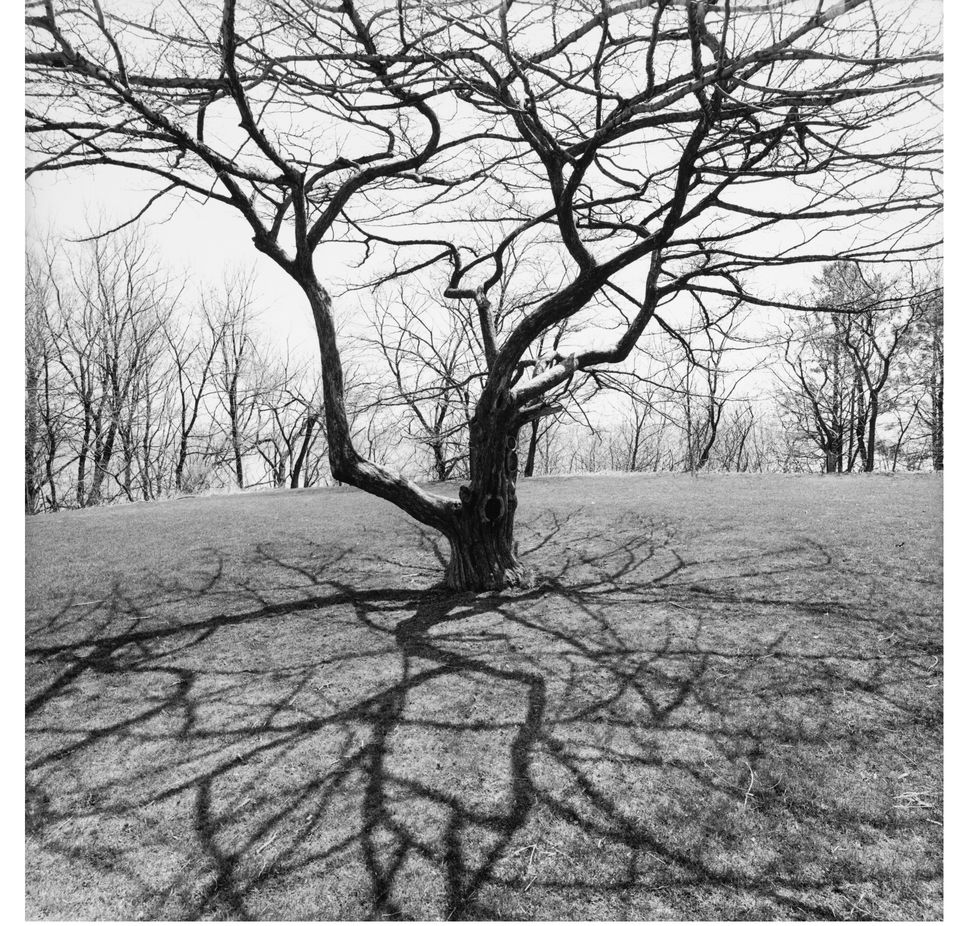 THE BOOK OF DAYS
In soul-baring confessional writings (maximum honesty with regard to oneself), the third-person form is better.
—
Max Frisch,
Sketchbook
(1970)
In God We Trust
. She notes these words inscribed on a five dollar bill she sticks in her pocket, heads for the park. Odd, how she no longer sees the motto on twenties and tens, on every coin in her purse. Did she ever believe in that trust? When the patrician voice of the president declared
a date that will live in infamy
; when her brother was drafted during the conflict in Korea; perhaps held that tarnished belief when she marched with thousands against the wars in Vietnam, Cambodia, Laos. Even then believed, though her trust was in the marching, not
God
on a dull penny, in the slogans and songs, trusting something worthy would come of her effort, more than camaraderie or the glow of self-satisfaction. Her picture had been snapped with the hippie academics. She’s in the tie-dye T pushing through the police barrier, storming onto campus when Governor Reagan punished children who stepped out of line, said oh no you don’t teach your dispiriting lessons against the war, not on my watch. These days she would not be sure of her footing if herded into the courthouse in Santa Barbara to be charged with unlawful assembly.
The Sixties were so performative!
This contribution from her daughter who lives nearby.
What does that mean?
Well, she can no longer march. In Central Park she walks the short distance set by her failing heart, delights in a warm day, an amber wash of Indian Summer.
She would like to know who proposed the motto
In God We Trust,
and when unseasonable days were first called Indian Summer, as though knowing might steady her flip-flop pulse. These are almanac questions with almanac answers available on an Internet service. Suppose, just suppose, this time round the easy answers will not heal by way of distraction.
I am outraged.
She repeats this phrase in the lilting, stage center voice that entertained students in the classroom and readings of her work in years past.
I am outraged. What crimes are they committing at their Black Sites?
Delivered to her husband, her brother, to Cleo and Glo—whoever will listen, and they are outraged, too, repeating the day’s dreadful news.
We have not been given the full count of the injured.
She is caught up in gestures of dollars and cents where
In God We Trust
came into her story—on green-backs, coinage in the pocket of her old black coat, though it’s her credit card that registers the small donations of her protest. So it goes.
She is still in her bathrobe at noon, her flighty gray hair unwashed, strange crust on her cheek, a new hillock of puffed flesh on the wrinkled map of age. She turns from the mirror. Not much for mirrors anymore. Let the body play out the days with a handful of pills adjusting the heartbeat, thinning the blood. Till well after noon she stays in her back room writing the last of her seasons, Fall with its showy splendor. She predicts year’s end may be her end, but that’s one of her stories. Her body will float on a bier of books and first drafts down the Lethe, or bob in Olmsted’s Lake, which appears at a distance, an elegiac vision she may have to revise, a cold wind ruffling the glass surface. Seldom given to self-pity. Consolation is across the street in Central Park with its Bridle Path, Pinetum, Reservoir Track, all that prospect of a healthy, if halting, afternoon walk, thus the five dollar bill in her pocket for the needy or a threatening encounter. She loses her glasses, forgets her cell phone and what’s for dinner, repeats her riff on outrage, remembers in some detail disturbing events of the past filed away under
Wars I have known,
one scene oddly persistent in recent days.

As a freshman in college, she stayed up late with her new friends. It must have been the first weeks of October. Three little girls at school with no bedtime, few rules. What stories did they have to swap? Empty vessels. She is harsh as she thinks of them in their flannel nightgowns, their French grammars and Lattimore’s monumental
Greek Tragedies
thrown aside for idle chatter. The woman came to their door, which stood open a crack. Looming, mysterious, she waited in the dim night light of the hall for a long moment, then invited herself in. The girls made tea on an electric hot plate, the red coil dangerously close to a curtain her mother had sewn to make life homey away from home. She figures how old their guest was, a graduate student from Austria studying Government, as they called Political Science then. Perhaps in her mid-twenties—big breasts, heavy thighs, the pulsing of her neck as she told her story. The plait of honey hair she drew round the fullness of that neck was a noose snapped free to reveal a silver cross. The three girls were children who listened obediently to the woman’s steady guttural voice with now and again a German word translated for them to English. The salty odor of sweat from the Austrian woman’s ragged ski sweater. They were all sitting on the floor of this room in a dormitory for mostly privileged young women. The rug was lumpy, braided of rags by the mother of the old woman who was then a girl listening to a story she could not comprehend, how their visitor’s father was taken away, the brother, too. Tap, tapping her cross, the woman said the Cardinal came to lunch. Her father had thought His Eminence’s visit a good sign. She knelt to kiss the Cardinal’s ring which smelled of laundry soap. They might find that the strangest part of her story. Come the next year, a knock on the door in Innsbruck and they were gone, the father, the brother taken by brutal men these girls had seen in newsreels and movies. More tea, and though they had not asked, the Austrian student with a woman’s body said as the war was coming to its end a soldier spoiled her. S
chande.
Never saw him, her face covered with a pillow. Soon after, the Russians came.