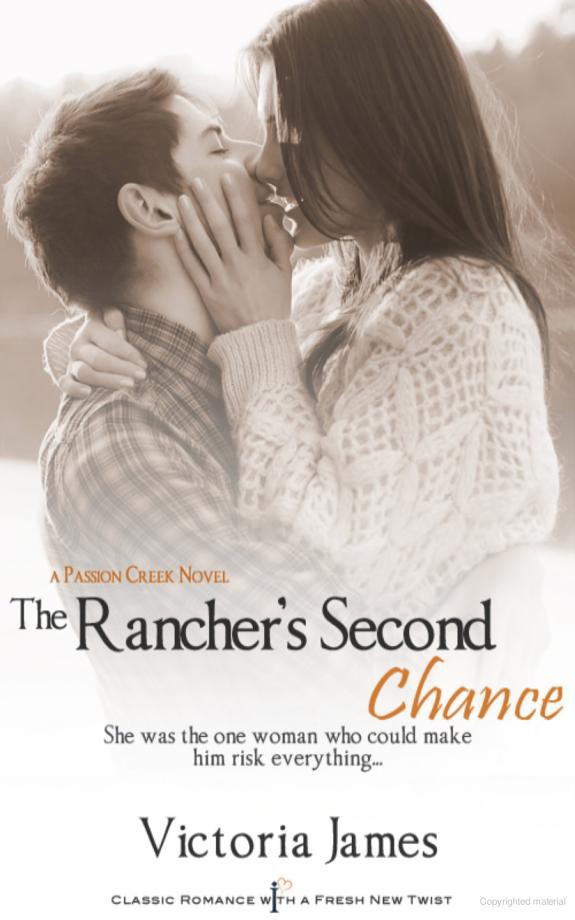 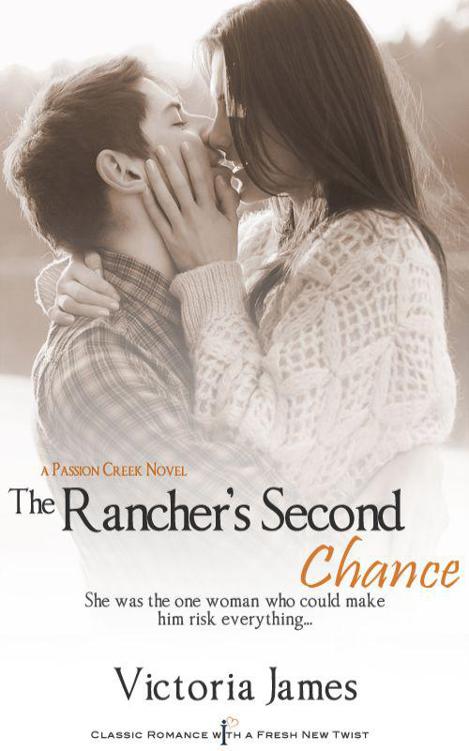 Copyright © 2014 by Victoria James. All rights reserved, including the right to reproduce, distribute, or transmit in any form or by any means. For information regarding subsidiary rights, please contact the Publisher.

Other books by Victoria James

Other books by Victoria James

A Risk Worth Taking

To my editor, Alethea...Thank you for your dedication, wisdom, and eternal patience. You challenge me to deliver my best and I’m so grateful for you.

You have a fan for life!

My appendix is about to explode. I’m going in for surgery.

Melanie Simms drew a long, shaky breath and leaned her head against the leather headrest of the driver’s seat. She’d been sitting in her parked car outside the Tall Pines Ranch trying to get herself mentally organized before heading inside.

She opened her eyes and glanced at her iPhone display again. Sure enough, the same message stared back at her. Her poor friend. Corrina Forrester, bride to be in a week, was across the country on a last-minute business trip and had wound up in the hospital for an emergency appendectomy. She was supposed to meet Melanie here today to finalize the details of her wedding ceremony and reception.

Melanie placed her hand on the cold car-door lever and took a deep breath. She was going to have to make some executive decisions on Cori’s behalf. They had known each other since high school, and she was confident she’d be able to pull this off. Her own expertise as a wedding consultant, coupled with a strong understanding of what kind of wedding her friend wanted, made her pretty confident she could handle the last few details without Cori.

Squeezing the handle of her leather portfolio tightly and carefully, Melanie stepped on the gravel driveway that led to the main house. Her boots crunched against the cold, packed earth. The faint dusting of snow on the ground and on the foothills only made the terrain more appealing.

The Tall Pines Ranch was sprawling, inspiring, and intimidating. It was set against the backdrop of the Rockies, and every time Melanie had been out here, the same feeling gripped her. There was a rawness, an overwhelming awareness of how small she was compared to the wilderness that surrounded her. The trees bordering the drive were bare, winter having robbed them of leaves and life, but not for long. In a little over a week the entire place would be transformed for the wedding. The naked branches would be dressed with twinkling white lights, and large rustic lanterns would line the long drive up to the main house.

She shivered as the frigid wind stole what little warmth remained inside her thin red pea coat. She was dressed for a day of meetings with her high-end clients, not traipsing around the ranch. As soon as her last client had left the studio, she drove straight out here, not wanting to waste time changing clothes first. Melanie climbed the wide wooden steps of the sprawling ranch house and knocked on the front door. Moments later, she was greeted by Mrs. Harris, the family housekeeper. As usual, her wide, welcoming smile made her feel as though she were visiting an old friend.

“Good afternoon, my dear. Come on in.” Mrs. Harris beamed, grasping Melanie’s forearm and ushering her into the entryway. Mrs. Harris had been the family housekeeper for years, long before Corrina and Cole’s parents died. Melanie had liked her the moment they’d first met, when she was still in high school. She’d been very aware of how different she was compared to the housekeeper in her own childhood home.

“Thank you, Mrs. Harris. It’s so good to see you,” Melanie said, smiling as she wiped her boots on the textured sea-grass mat. Mrs. Harris motioned for her jacket and she took it off, placing it in her waiting arms. The older woman bustled over to the closet, her vibrant red dress swaying with the motion.

“It’s so lovely to see you again, my dear,” the elderly woman said, clasping her hands together.

“Nice to see you, too. I’m sorry I’m late, but my appointments ran longer than expected.”

“Those brides are keeping you busy, aren’t they?”

Melanie scrunched up her nose. “Unfortunately, they are. And not in a good way.” She hated admitting her business was losing some of its luster, that the brides she was working with were increasingly demanding and unpleasant. “It’s nothing I can’t handle. Don’t worry about me. How about Cori? Any news?”

A deep frown set into the woman’s plump face, lines embedding themselves around her mouth. “Not too much, I’m afraid. Adam has already flown out to be by her side, and poor Cole is pacing around here like a caged lion, worried sick about his little sister. Nothing we can do but wait and see. Cole should be in soon for dinner; maybe he’ll have some news for us.”

She followed Mrs. Harris into the great room, ignoring the tickle of anticipation that scurried through her at the thought of seeing Cole again. It was ridiculous, really. Cole had never even given her more than a few sentences here and there. And that had been on one of his more talkative days.

A white ceramic coffeepot and matching cups rested on the large side table, and Mrs. Harris motioned Melanie to the taupe-colored, chenille sofa. Melanie sank into the plush cushions, placing her portfolio beside her on the couch. She’d been in this room many times over the years and it still evoked the same warmth. The only time it had seemed sad and vacant had been the year following the death of Cole’s wife.

“Now, let’s sit and catch up before Cole gets in. I told him you’d be coming by, and that man is never late for dinner when my roast is on the menu,” Mrs. Harris said proudly. She poured Melanie a cup of coffee, the dark brew steaming in the large mug.

“You make the best coffee, Mrs. Harris,” Melanie said with a sigh, adding some cream to her cup and then settling back into the dense cushions.

“Well, thank you my dear. Freshly ground beans is my trick. Cole loves a strong brew. Maybe because he’s such a strong man.” Her voice trailed, rather theatrically as she stared at Melanie over the rim of her cup.

Melanie gave her a small smile, trying not to show any reaction to that last comment. It was getting increasingly difficult to relegate her thoughts of Cole to the recesses of her mind when Mrs. Harris insisted on mentioning him every two minutes. How strong he was. And really, she knew the woman must have meant strong, emotionally, after the heartache. She should
not
be picturing his body. Cole had always seemed slightly larger than life to her, slightly beyond her grasp, beyond her comfort level. When she was in his presence there were times she felt like a child playing with matches, trying to get a spark, and instinctively knowing she’d have no idea what she’d do if that fire ever ignited. She stared inside her cup, hoping Mrs. Harris would attribute her flushed face to the warmth of the liquid.

Footsteps and men’s low voices filled the quiet space, and Melanie’s heartbeat quickened as Cole’s deep voice became discernible. Mrs. Harris was already standing and seconds later Cole Forrester filled up the doorway and her mind. He was a solid, six feet two inches of hard, beautiful man. There wasn’t a soft spot on his well-defined, hard-working body. His low-slung, well-worn jeans outlined his long legs and narrow hips. His hands braced the doorjamb in the entryway where she noticed his dark blue button down shirt straining against his wide chest. His trademark dark brown Stetson shadowed his eyes, though Melanie knew their exact shade of light brown.

He smiled at Mrs. Harris, the tiniest hint of a dimple peeking out for the briefest second. “Hi, Mrs. H.”

“Hi, Mel,” he said with a nod in her direction.

“Hi,” she answered, with a silly half wave. Then she scrambled, stood, and picked up her agenda. This was going to be painfully awkward without Cori around.

Mrs. Harris stood. “Dinner is just about ready. Melanie, why don’t you join us? You can do what you need for the wedding once you’ve eaten.”

She didn’t glance over at Cole, but since he didn’t second the invitation, there was no way she was going to impose. She shook her head quickly. “Thank you so much, but I’ll just take those measurements in the great room and dining room and then be on my way back to town.” Her fingers tightened around the leather portfolio at the thought of having dinner with them.

“Nonsense, no guest of mine will leave this house without eating. And you’re like family,” Mrs. Harris said, patting her on the cheek before picking up the tray and walking toward the entry.

Melanie darted her eyes over to Cole, who was watching her, his expression indiscernible.

“I really don’t want to impose,” Melanie said, following her. Cole had moved aside, taking the tray from Mrs. Harris, who was already bustling down the hall in the direction of the kitchen. Melanie realized he was waiting for her to walk through. Her heart picked up as she approached him.

“Well, now, you’re a gorgeous sight after a long day’s work.” The deep, rich voice that seemed to come out of nowhere belonged to Gage Mackenzie. The Tall Pines’ foreman and long-time family friend sauntered into the room with his trademark smile. Seconds later he had Melanie wrapped in his arms for an extra friendly embrace. Gage was every bit the handsome, charming cowboy. Cole made some sort of noise, but Melanie couldn’t see his expression over Gage’s shoulders.

“I think you can let her go now, or that roast is going to get cold,” Cole drawled in a smooth voice and Gage finally pulled himself away.

“Yeah, well, Mel’s worth eating cold roast,” he said with a wink. Melanie shook her head at him, smiling. She’d always been fond of Gage.

“Nice to see you, Gage,” she said smiling up at him. “I should probably see if I can convince Mrs. H to let me help with dinner.” They walked into the enormous kitchen, where they were greeted by the sweet, rich aroma of roast and vegetables.

“No, you’re not helping me,” Mrs. H called out, placing serving spoons in a wooden salad bowl. Melanie approached the huge butcher block island and pried the spoons from her hands.

“Oh yes I am, or I’m not staying.” She pointed a shiny spoon at the elderly woman.

Mrs. H winked. “I know better than to argue with you, my dear.” She began slicing bread while Melanie drizzled homemade salad dressing from a glass measuring cup onto the lettuce.

Melanie gazed out the large windows as she tossed the greens. The snow had picked up and even though dusk had settled in, she could still make out the view of the snow-covered pastures, with the worn wooden fences and the mountains in the distance. It was a sight that made her want to stay here forever. She had always loved Cori’s home. Mrs. H always had something cooking, and the quaint, comforting smell of homemade bread filled the air.