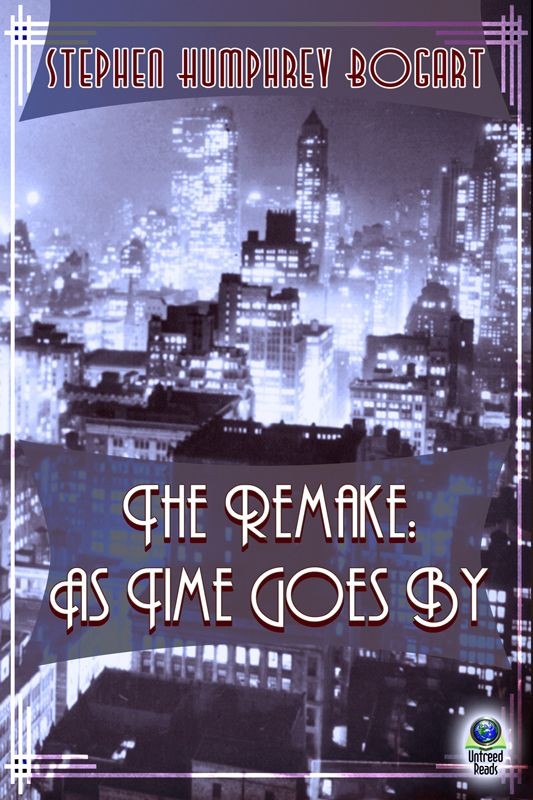 The Remake: As Time Goes By

The Remake: As Time Goes By

Bogart: In Search of My Father

As Time Goes By

It was spring and there was a manic energy turned loose in the city, an energy that made everybody bounce a little when they walked. Even though it was still too cold for all the bad smells to thaw out, people were starting to unbutton the top buttons of their coats and look with a special spring gleam in their eyes for new ways to hurt each other.

But it was spring, and R.J. didn’t mind. He liked the fact that all New Yorkers are predators. It was why he lived here. He’d grown up with the sun-tanned, veggie-loving mood-ring kissers on the West Coast, and he would just as soon take the knife in the front, New York–style.

It was spring in New York and R.J. was alive, healthy, and he had enough dough tucked away that he could tell just about anybody to go to hell if he felt like it. Which he frequently did these days.

The last six months had been hard. Especially for a guy trying to make a living by being tough. Ever since his mother, film legend Belle Fontaine, had been killed, he had been up to his
neck in two of his least favorite types: lawyers and reporters. The lawyers would probably be with him for a while, at least until he got Belle’s estate squared away. The reporters—that was another matter.

It had taken the media buzzards most of that six months to get the message: R.J. Brooks wasn’t talking. Didn’t want his picture on any magazine covers—although he’d been on eleven without his permission when he gave up counting. He didn’t want to appear on any TV shows, with their hysterically sincere hosts and brainlessly enthusiastic studio audiences. Wouldn’t give an exclusive to any of the network soft-news magazines. Wouldn’t cooperate in any Movie of the Week—although a couple had been made. Wouldn’t say anything to anybody with a press pass.

Except Casey Wingate, of course.

Casey. He sighed just thinking about her.

Most of his life he’d been able to handle women with no problem. He could take ’em and leave ’em, and he’d done that with his fair share. More than his fair share. Enjoy them for what they could give, and when cling-itis developed, walk away with a smile, no hard feelings.

Casey was different. And that was an understatement. Six months into their relationship, and there were days when he still didn’t know if they had a relationship.

He tried like hell to get back to his old attitude. Accept whatever Casey offered, which was plenty, and let it go at that. Tried like hell, and failed miserably. She was under his skin and he was stuck with it. Worse, he wanted to stay stuck.

And Casey was a TV producer. They had met when Belle died. Casey had been working on a story about Belle and she had ended up helping R.J. catch Belle’s killer.

It had been hard to say no to Casey’s project on Belle. In fact, it had been so hard R.J. hadn’t even tried. He’d gone meekly in front of the camera and said his piece. Because that’s what Casey wanted. He was a tough guy in a tough job, but
when Casey wanted something… Somehow he just wasn’t tough enough to say no to her.

So there was his face, all over network TV. And the show got terrific ratings, which was great for Casey’s career. But for his, it was a kiss of death. Because every time he showed up to do surveillance lately, some bozo would light up with a goofy grin, point a finger, and shout, “Hey! You’re that guy on TV!” And there went the job.

To be fair, he had to admit that Casey had been helpful finding a solution. Had helped him get ready for the job today, in fact, and so far everything was going smoothly.

R.J. snapped out of his thoughts when he realized he was being followed. More accurately, he was being stalked. He stopped in front of a store window and looked inside for a moment. It was a butcher shop. R.J. pretended to be very interested in a duck and a pair of rabbits hanging in the window, headless and skinned. Of course he was really just looking in the glass. It was an old trick, but it still worked, especially on the kind of punk who seemed to be following R.J. right now.

In R.J.’s business, if somebody was following you it was never good news, and it could get very bad. Outraged lovers have long memories, and R.J. was good at his job. He’d been a private investigator specializing in marital problems long enough that he’d made quite a few enemies. But this didn’t look like one of them.

Reflected in the butcher shop window was a young guy with baggy clothes, baseball cap backwards—a real cliché. Probably hadn’t been watching MTV and didn’t know that New York punks weren’t wearing that stuff anymore. Very sad, no sense of being on the cutting edge of society’s deterioration. But this punk was definitely following him.

R.J. hid a grin. The kid was in for a surprise.

R.J. moved slowly down the street. What the hell, make it easy for the punk. Get it over with. And sure enough he was
no more than half a block further when the little shit made his move.

“Give it up, bitch,” came the voice. R.J. could tell the kid was fighting to keep his voice from cracking. He felt a tug on his shoulder bag, but held on hard. “Come on, old lady,” the kid said, “just give it up.”

R.J. struggled for a minute, getting real pleasure thinking of the surprise this creep was going to get. Then the pulls on his shoulder bag got to be too much and R.J. spun on the balls of his feet and planted his fingertips in the punk’s gut, right under the rib cage. The creep grunted, “Uhhk,” and collapsed onto the sidewalk.

The people on the street had been moving casually around them. R.J. pulled out The Big E, his .357 Magnum, from its resting place in the waistband of his dress, and the people gave them a slightly wider berth, but traffic moved on undisturbed. Nobody screamed, nobody yelled for a cop, nobody tried to wrestle him to the ground—nothing. Just a quick glance and a slightly faster pace.

I love this town, R.J. thought. He knelt and put the nose of the huge gun into the punk’s earhole. “Us old ladies are getting tired of punks like you,” he said in the quavery little voice he’d been practicing. “We’re learning to fight back.”

R.J. pulled the hammer back on his pistol. It sounded loud even to him. To the kid it must have sounded like God’s footsteps. “Pass the word, punk,” R.J. quavered. “Old ladies are off-limits. Next time I pull the trigger.”

The kid’s eyes were basketball-sized when R.J. stood up. Just for luck, he planted a hard kick in the punk’s crotch and watched him shrivel up, writhing on the sidewalk like a worm on a hot plate. “Remember: Hands off old ladies, or else,” R.J. said, and walked away grinning.

It was good to know the disguise worked well enough to fool a punk like that. It would be plenty good enough for his job this afternoon, too. And even better, it had been fun to put it on.

Casey had sat him in a chair and worked on his face for over an hour, using all the little makeup tricks she’d picked up in a career in TV. When she was done and showed him his reflection, R.J. was stunned.

“Why so surprised?” Casey had asked him.

“I look like a little old lady, for Christ’s sake.”

She took the mirror away. “There’s a little old lady in all of us, just waiting to get out. Stand up.”

She’d dressed him in a housedress, padded out with stuff she’d borrowed from a friend in a costume-rental house who owed her a few favors.

He stepped to the big mirror to take a look. He stopped after two steps when he heard Casey groan. “What?”

She’d put her hands on him, bending him over.

“You’re
old.
This whole area hurts. So you walk like
this.
Yeah. Now the legs—knees are shot, keep ’em locked. Better. Walk across the room. Again.”

And he’d practiced. After about forty minutes, she nodded. “All right. That’s pretty close.”

“Jesus,” he complained. “I didn’t know you were Method.”

R.J. grinned. “Thinking of me in a holding cell dressed like this?”

“No. It might hurt my career if they knew I hung out with a cross-dresser,” she said.

“Thanks, Wingate. I’ll remember this.”

“Just remember how to walk.
Hmmp,
” she said.

She shook her head. “In a really weird kind of way—it’s very…attractive,” Casey said, her tongue resting on her lip.

And before he really knew what was happening the costume was all over the floor, and he was an hour later than he thought he would be to his stakeout.

It was worth it. Something had gotten into Casey, into both of them, and they had been all over the floor, completely wild. Maybe it really was the costume, and maybe the costume was just an excuse. For whatever else was going on—the moon, or maybe Aquarius was in Jupiter or something. Maybe it was just the weather. Sure, that was probably it; the change in weather. It was spring, goddammit.

R.J. grinned. Spring in New York. He loved it.

Reverend Lake was terribly afraid his wife might be “seeing” someone.

He sat in the chair across from R.J.’s desk, shaking hands with himself and knotting his fingers as he tried to think of how to say it.

“She’s somewhat younger than I,” said the preacher. He self-consciously jerked a hand up to his salt-and-pepper hair, more salt than pepper. “And I’m afraid that I, well—” He shrugged. “It is sometimes hard to be as attentive as one might think ideal. I am shepherd of a large flock, all with their own problems, which are my problems. And Cassandra…”