The Residence - Inside the Private World of The White House 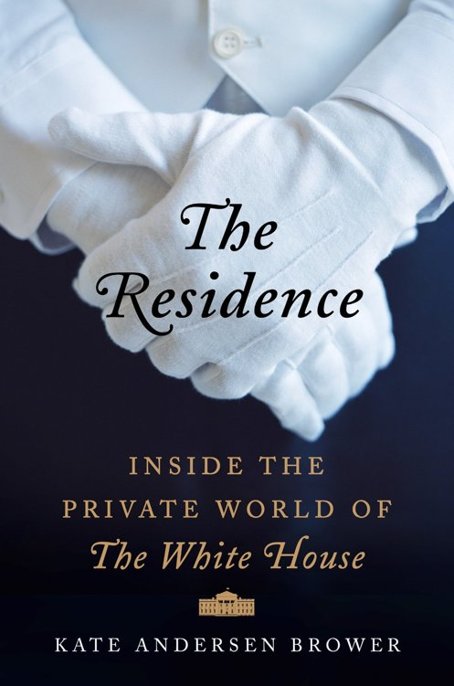 FOR BROOKE BROWER, MY HUSBAND, AND THE ONE WHO MAKES ME BELIEVE THAT ANYTHING IS POSSIBLE.

AND FOR OUR JOYOUS BABIES, GRAHAM AND CHARLOTTE.

Living in the White House is like being on the stage, where tragedies and comedies play alternately. And we, the servants of the White House, are the supporting cast.

P
reston Bruce was sitting in his Washington, D.C., kitchen with his wife, listening to the radio and having lunch—the one meal they ate together every day—when an announcer interrupted with an urgent message:
the president has been shot.

He jumped up from his chair, cracking his knee on the table and sending dishes crashing to the floor. A minute or so later came another announcement, the voice even shriller:
The president has been shot. It has been verified that he has been shot. His condition is unknown.

This can’t be happening
, thought Bruce. He threw on his coat, forgetting his hat on the brisk November day, and jumped in his car, tearing out of the driveway. His wife, Virginia, was left behind standing in their kitchen, shell-shocked amid the shards of broken dishes lying on the floor.

The normally unflappable Bruce was weaving through downtown traffic at fifty-five miles an hour—“I didn’t realize how fast I was going,” he would say later—when he suddenly heard a police siren blaring behind him. An officer on a motorcycle pulled up alongside him at Sixteenth Street and Columbia Road, jumped off his bike, and walked over to the driver’s door.

“What’s the hurry?” He was in no mood for excuses.

“Officer, I work at the White House,” Bruce said breathlessly. “The president has been shot.”

A stunned pause followed. Not everyone had heard the devastating news. “C’mon,” the startled officer said, jumping back onto his motorcycle. “Follow me!” Bruce got his own police escort to the southwest gate of the White House that day.

Most Americans who were alive in 1963 remember exactly where they were when they learned that President Kennedy had been shot. For Bruce, though, the news had a special impact: Kennedy wasn’t only the president, but he was also his boss, and—more important—his friend. Preston Bruce was the doorman at the White House, and a beloved member of the staff. Just the morning before, he had escorted the president, the first lady, and their son, John-John, to the marine helicopter on the South Lawn, which would carry them to Air Force One at Andrews Air Force Base. From there the Kennedys would leave for their fateful two-day, five-city campaign tour of Texas. (John-John, who was just four days shy of his third birthday, loved helicopter rides with his parents. He went only as far as Andrews; when he was told he couldn’t accompany his mother and father all the way to Dallas, he sobbed. It was the last time he would ever see his father.)

“I’m leaving you in charge of everything here,” President Kennedy shouted to Bruce, above the whir of the helicopter’s engines on the South Lawn. “You run things to suit yourself.”

A descendant of slaves and the son of a South Carolina sharecropper, Bruce had become an honorary member of the Kennedy
family. He watched movies with them in the White House theater and looked on as the president played happily with his children. He winced when Kennedy bumped his head on a table while chasing John-John, a rambunctious toddler, around the Oval Office. (JFK’s desk was one of John-John’s favorite hiding places. Bruce would sometimes have to fish him out from underneath before important meetings.) Tall and thin in his midfifties, with a shock of white hair and a bright white mustache, Bruce wore a black suit and white bow tie to work every day. He was so devoted to his job, which included the delicate assignment of seating nervous guests at state dinners, that he designed a table nicknamed the “Bruce Table,” with a slanted top that made it easier to arrange table place cards. His invention would be used for decades.

On November 22, as he raced toward the White House, Bruce was in disbelief. “To this day I can still feel the shock that ran through my whole body,” he later recalled.

After arriving at the executive mansion, he had only one thing on his mind. “I would wait for Mrs. Kennedy.” He huddled around the TV with other workers in the crowded Usher’s Office. The news confirmed fears shared by every White House staffer. “In most of our minds,” he wrote years later, “you’re always aware that it was completely possible that any president that ever left that eighteen acres could come back just like President Kennedy.”

When Jackie Kennedy finally returned to the White House at 4:00
A.M.
wearing the iconic bloodstained pink wool suit and clutching the arm of her brother-in-law Robert F. Kennedy, she was ghostly white and eerily calm. “Bruce, you waited until we came,” she said softly, as though she was trying to comfort him. “Yes, you knew I was going to be here, Mrs. Kennedy,” he replied.

After a short service in the East Room, he led the first lady and the attorney general up to the private residence on the second floor. In that quiet moment in the elevator, standing next to the two people who
had been closest to JFK, Bruce finally broke down sobbing. Jackie and Robert joined him, folding their arms around one another, they cried together until they reached the second floor. When Jackie got to her bedroom she told her personal maid and confidante, Providencia Paredes, “I thought they might kill me too.” Then she finally took off the suit caked in her husband’s blood and bathed.

Exhausted, Bruce spent what was left of that night sitting upright in a chair in a tiny bedroom on the third floor. He took off his jacket and bow tie and unbuttoned the collar of his stiff white shirt, but he wouldn’t let himself give into exhaustion. “I didn’t want to lie down, in case Mrs. Kennedy needed me.” His allegiance was reciprocated. Shortly after the funeral, the first lady gave him the tie her husband had worn on the flight to Dallas. “The president would have wanted you to have this,” she told him. (JFK had switched ties just before getting into the motorcade, and had the old one in his jacket pocket when he was shot.) Robert Kennedy pulled off his gloves and handed them to his stricken friend: “Keep these gloves,” he told Bruce, “and remember always that I wore them to my brother’s funeral.”

The White House doorman refused to leave his post to return home to his wife until November 26, four days after the assassination. Bruce’s devotion to his job, and to the first family, may seem remarkable, but nothing less is expected from those who work in the residence.

A
MERICA’S FIRST FAMILIES
are largely unknowable. Their privacy is guarded by West Wing aides and by a team of roughly one hundred people who stay deliberately out of sight: the White House residence staff. These workers spend much of their time on the second and third floors of the fifty-five-thousand-square-foot building. It’s here that the first family can escape the overwhelming pressures of the
office, even if just for a couple of precious hours while they eat dinner or watch TV. Upstairs, as tourists shuffle below on the first floor and amateur photographers gather at the perimeter fence with cell phone cameras, they are free to conduct their personal lives in private.

Unlike the slew of political aides who have eagerly given interviews and published memoirs after leaving the White House, the maids, butlers, chefs, ushers, engineers, electricians, plumbers, carpenters, and florists who run America’s most famous home have largely preferred to remain invisible. One worker told me that his colleagues share a “passion for anonymity.” As a result, the unseen backstairs world of the White House staff has remained rich with intrigue.

I first became aware of that world when, as a member of the White House press corps, I was invited to a luncheon that Michelle Obama held for fewer than a dozen reporters in an intimate dining room on the State Floor of the White House. Dubbed the Old Family Dining Room after Jackie Kennedy created a separate dining room on the second floor that is used more routinely by current first families, the room is tucked away across from the formal State Dining Room, where I had covered dozens of events. I had never seen this private side of the White House; indeed, I didn’t even know the room existed. Access to many areas of the residence is heavily restricted; reporters and photographers covering formal events, such as East Room receptions and state dinners (now often held in an impressive white pavilion on the South Lawn), are kept cordoned off from White House guests. And for these large gatherings, the White House staff is often augmented by the hiring of part-time butlers and waitstaff.

So I was surprised, on the day of the first lady’s luncheon, when a handler ushered us into the relatively small and cozy Old Family Dining Room, and an elegantly dressed gentleman offered us champagne on a gleaming silver tray. The menu included salad
with vegetables from the White House garden and fresh pan-roasted rockfish elegantly presented on Truman china. Each course was served by a butler who clearly had a rapport with the first lady.
This is all very
Downton Abbey, I thought. The experience left me wondering: Just who were these people, so intimate with the world’s most powerful family?