Read The Reverence of One: Book Three of the Shadow Series Online

The Reverence of One: Book Three of the Shadow Series 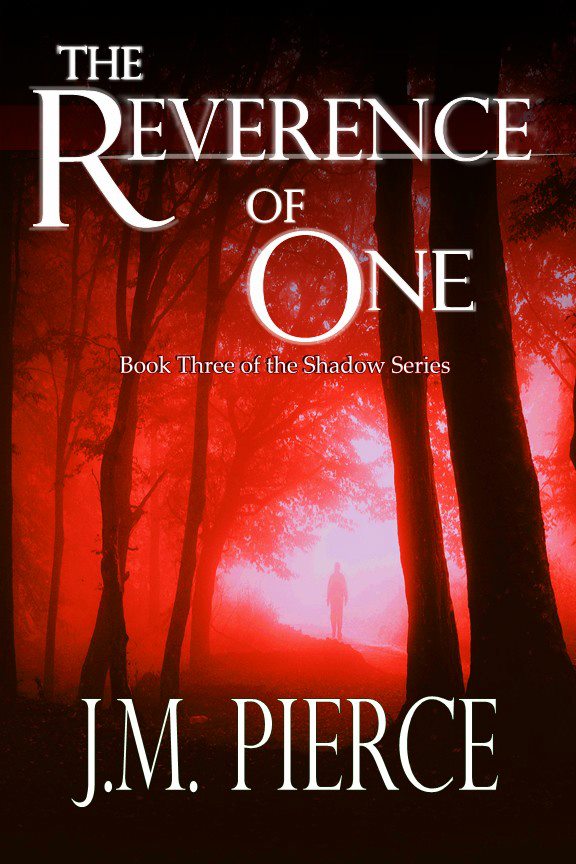 The Reverence of One:

Book Three of the Shadow Series

All rights reserved. Except as permitted under the U.S. Copyright Act of 1976, no part of this publication may be reproduced, distributed, or transmitted in any form or by any means, or stored in a database or retrieval system, without the prior written permission of the author.

For the fans of the Shadow Series

Your emails, reviews, and support mean the world to me.

A subtle his
s
and the beeping of electronics slowly filtered into her ears. She became aware that she was awake, but struggled to open her eyes. They felt gooey, like her eyelashes had been glued together.

The blankets felt heavy atop of her,
their weight wrapping her thin frame like a cocoon
, and t
he pillow beh
ind her head was soft and warm. Stuck in the fog between consciousness and sleep, s
he tried to lift her left arm to her face, but it felt as though something were attached
. She pulled slightly, but
stopped as she
felt a
tinge
of pain in the top of her hand
. She rested that arm back down
,
and s
lowly lifted her right
. Feeling
no restraints,
she
brought her fingers to her face and forced
her eyelids
a
part.
H
er vision
blurred
.
S
he blinked forcefully
while rolling her eyes beneath their lids
and
each
time
her sight became less obstructed with the film that seemed to coat
them
.

She could see the ligh
ts over her. Though dimmed, they
still caused her to bury her face into the crook of her arm until her eyes could adjust. She let out a deep sigh.

“Damn it,” she muttered under her breath.

Not a couple of weeks before, she had found herself in the same place; maybe not the same room, but definitely the same place. As soon as her mind became aware, the cravings began. She needed a fix.

She sat up
, the speed of which gave her a rush of dizziness that nearly caused her to
lose consciousness once again
. After a couple of deep breaths, she looked at her arms. Her pasty white skin was covered with red blotches
. T
iny
,
scabbed over holes littered her
flesh
where she injected her heroin. She saw the I.V. needle in the top of her hand and
traced the line with her eyes to a bag filled with
a
clear liquid
that hung
half empty
on a pole next to her bed
. She
let out a
demented
giggle.

Yanking the I.V. from her flesh, she swung her legs to the side of the bed
and
glanced at the heart monitor that was mounted on her thumb. Without thinking, she removed it
,
causing an alarm to go off on the monitor beside the bed. “Sh
u
t
up!
” she spat angrily
as she pushed
indiscriminately at the
buttons
, trying desperately
to get the alarm to silence.

Not knowing which one did the trick didn’t matter, it worked. She placed her bare feet on the cold
,
tiled floor and took one weary step to a chair opposite the bed. On her right wrist was a white plastic bracelet. She rolled her
arm
over to read it
and m
ixed in with a cluster of nu
mbers, including her
social security number, was her name
in bold black print
.

Leaning back in the chair, she ran her fingers through her jet black hair and whispered to herself. “
Now I’ve got a matched set
.”

The
four
of them – Lauren,
Cliff,
Alyssa, and he—had traveled hundreds of miles in a figurative blink of an eye. After regaining his strength from his battle with Anil and Ikuhabe, they had traveled in the
S
hadow realm to Lauren’s home outside of Forks,
Washington
. Alyssa was thrilled when she found out
their
destination as she was particularly fond of a series of novels that used Forks as its backdrop. Test found it more ironic than anything. The fact that the vampire fantasy was more believable than the reality of the Shadows
’
existence was difficult to wrap his mind around.

Test continued to struggle with Alyssa’s death. He knew that he hadn’t lost her, but he mourned for those that had. More so, he mourned for what she had lost. Though she seemed completely at peace with her fate, he knew that her death was his fault. Once again his existence was the demise of another’s life.

From behind him, Lauren’s voice greeted him with
what seemed to be
her usual
frumpy tone.
“Good morning.”

Test spun to see
her
walk
ing
into the room.
She plopped onto the couch, her plush pajama top and bottoms hanging loosely on her frame. Her hair was put up with a type of band that pulled it all to the back of her head
,
and as she set down her cup of coffee on the end table, she arched her back with arms in the air and released a long and drawn out yawn.

Lauren
was difficult for
Test
to understand.
In many ways she was like Cliff had been when they’d first met; a hardened exterior yet something that said there was
a redeeming quality
within. Even though there were similarities, Test knew full well that Lauren had been a Reaper for a lifetime, and that fact made her unpredictable and somewhat untrustworthy in his mind.

Lauren’s hands plopped in her lap as she ignored his question with one of her own. “Where’s the ghost of a girlfriend?” she asked in a stabbing jest.

“Don’t say that,” he replied, trying to keep a respectful tone.

“What, truth hurt? This is the first time I haven’t seen you wasting energy on her since we’ve been home.”

Test turned away from her and returned his gaze to the tree line. The sun had overtaken the tops of the trees and the light had begun to shine
brightly
into his eyes.

“She’s gone to visit her Aunt and Uncle,” he replied. He turned from the window and sat in a chair perpendicular to the couch.

Lauren’s demeanor had begun to anger Test.
She hadn’t known him long enough to be
lashing out in
such
a bitter tone.
He sat
forward in his chair, a faint blue light beginning to emit from his hands.

“Careful there hero,” spat Lauren as she too leaned forward. “I’m not one of those humans that you’re used to tossing around.” She held her palms up for him to see, and let a devilish grin slip into view. “I can fight back.”

Test could see the light ready to burst from beneath the flesh of her palms
,
and he immediately shoved his hands under his legs.

“I’m sorry,” he replied forcefully, “but do you have to be so…callous all the time. If we’re going to live together, can’t we…”

“Whoa! Hold it right there!” exclaimed Lauren, cutting him off mid-sentence. “We are
not
living together.” She stood from the couch and pointed a finger at Test. “You are just visiting for a while.”

Test dropped his head. “Damn, Lauren. Does it really have to be this difficult?”

He stood from his chair and crossed the room in front of her. Before he could pass, he felt her invisible grip on his arm. He turned his head to her as she held her right hand out towards him
,
a gentle blue glow visible in her
palm
.

“Hold on,” she said in a now suddenly softened voice. “I’m sorry. You have to understand something,” she began as she released her grip on
him.
“I’ve not had to play nice for the majority of my life. In fact, I’ve been taught to do just the opposite.”

Test relaxed his stance slightly and nodded without a response. As he began to walk away, he felt her grip begin to hold him once more.
He turned quickly and, i
n an eruption of red and blue light, released a burst of energy that sent Lauren
reeling
backward onto the couch.

“Don’t think that just because you are so much older than me
,
or that because you used to be a Reaper that you can be a bitch whenever you feel like it.” Lauren stared at him wide eyed from the couch while
he
continued. “I am grateful that you saved me. I am grateful that you have given Alyssa and me a place to stay. It’s true that I need you—I want to learn more about what I am—but I will not be your whipping boy for eternity if that’s what you have in mind.”

Though shaken by Test’s show of strength, Lauren responded with
a
playful smile. “We don’t live forever.”

Test wrinkled his nose with confusion. “What?” he asked.

“You said that you wouldn’t be my whipping boy for eternity. Shadow’s live a long time
,
yes, but not forever.” The smile on her face grew even larger. She reached to the floor and picked up the coffee mug that Test’s outburst had knocked off the end table
. She stood and tucked a stray strand of hair behind her ear.
“
Oh yeah, and you’d better be careful about letting go of too much power. They’ll find you that way.
You want a cup of coffee?”
S
he
spoke
calmly
as though none of the
animosity
of the
moments
just
prior had ever happened.

Test eyed her curiously as she passed him and headed into the kitchen. “
Yes, please,” he grunted. Under his breath, he mumbled as he turned to follow her. “Great,
my mentor is
a bi-polar
bitch
.”

“I’m not hard of hearing,” she replied in an unusually chipper tone as she grabbed the coffee pot.

Test entered the kitchen and pulled out a heavy oak chair from the kitchen table. He rested his palms on his knees, feeling the slight pulsing waves of energy
coming from them
as he tried to calm himself.

Inside, i
t was a beautiful house, one that he wouldn’t have expected from someone like Lauren. Everything was pristine and bright. The stainless steel appliances reminded him of Nicole’s parents’ house, though Lauren’s was much cozier. Dark stained oak trim
and crown molding out
lined the floors
and ceiling,
matching the color of the cabinets perfectly
. The walls were all an off white with the north wall accented in a dark chocolate brown which, whe
n the lights were dim in
the evenings, looked nearly black. The floor was made up of unevenly shaped stones that looked as though they were meant for a patio as opposed to a kitchen floor, but it worked in the room. The countertops were a dark marbled material with fat rounded edges.
In the center of the ceiling was a large skylight that allowed copious amounts of light
to
enter the room
;
again, something that he wouldn’t have expected in a house Lauren owned.