Read The Rules for Breaking Online

The Rules for Breaking 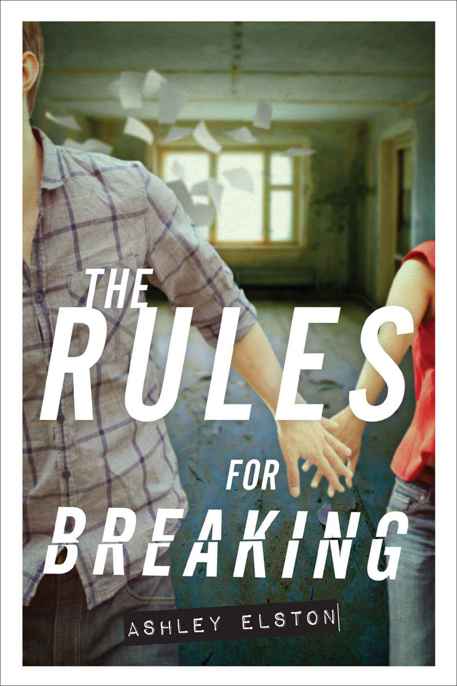 All rights reserved. Published by Hyperion, an imprint of Disney Book Group. No part of this book may be reproduced or transmitted in any form or by any means, electronic or mechanical, including photocopying, recording, or by any information storage and retrieval system, without written permission from the publisher. For information address Hyperion, 125 West End Avenue, New York, New York, 10023-6387.

For my boys—Miller, Ross, and Archer

you teach me how to shoot a gun?”

I’ve been putting off asking Ethan this question for a week. It’s now or never. We’re in his truck, headed to the farm, and there is a practice range there that Ethan and his dad use to sight in their guns before hunting season. If he agrees, I won’t have time to back out before the turnoff.

Surprise flashes across his face. “Are you sure?”

I can tell he doesn’t believe me, and I don’t blame him.

It wasn’t that long ago that I blacked out when I saw him shoot a hog that was attacking his dog. That shot brought back memories so horrible that I had repressed them for months. But I remembered everything now, and I was determined not to cower behind a couch the next time I came face-to-face with a killer. Not if there was anything I could do about it.

“What brought this on?” he asks.

I shrug, not meeting his eyes. “I don’t like being scared of anything.” And that much is true. I’m terrified of guns, but I’m more scared of returning to the life I led just a few short weeks ago. “I’m ready and we’re here. Perfect timing.”

My family has only been out of the Witness Protection Program a month and I’ll do anything to avoid going back. Our short time in the program nearly destroyed my family.

He reaches for something near my feet and I automatically snatch my purse from the truck floor. The last thing I want is for him to see what I’m hiding inside. He grabs the remote control that works the gate to the farm, which must have fallen out of its usual spot in the cup holder, and gives me a strange look.

“You’re jumpy. You hiding another boyfriend in that bag?”

I return his smile with a weak one of my own. Have I been glancing over my shoulder way more than what’s normal? Yes. Have I nearly jumped right out of my skin at every little noise? Yes. Do I want to tell him why? No.

Ethan turns serious. “Anna, you’ve been different ever since the Mardi Gras dance. You know you can tell me if something’s wrong, don’t you?”

“No! I mean yes, I know. Nothing is wrong. It’s all good. Sorry for being weird.”

I hate thinking about the Mardi Gras dance.

It was supposed to be the perfect night. I was back to using my real name—no more fake identities—and I had convinced myself it was all over. I no longer dreaded the suits showing up and pulling me away from everyone I’d grown to love, like they’d done so many times before. I no longer worried every time I said good-bye to Ethan that it might be the last time I saw him.

And it
was
perfect—at first. I felt like the belle of the ball dancing in Ethan’s arms, and the night was getting even better when the party moved to Will’s house.

But that’s when everything fell apart. That’s when the man I thought of as Agent Thomas re-entered my life.

“I’ve just been a little stressed lately,” I add nervously. And that’s the truth.

“And you think now is a good time to shoot a gun?”

“Yes, I do.” I drop my purse back down on the floorboard.

“Okay, then. If you really think you’re ready, we can try,” Ethan says.

I may be good at hiding things from my dad and my little sister, Teeny, but I can’t hide anything from Ethan. He knows something isn’t right. Gripping my bag, feeling for the hard corners of the journal tucked inside, I think about how much to tell him.

I’m not mentioning the bizarre return of my missing journal…or the single daisy that was left in the pages. I’m not telling him about the note that Thomas, fake agent and would-be assassin, left in the pocket of my coat—the note that I tore to pieces, then taped back together hours later. I’ve re-read that note a hundred times looking for some clue or hidden meaning, but there’s…nothing. It still freaks me out that Thomas managed to get within a few feet of me and I never knew it. I’m not telling Ethan there may still be someone out there watching me.

Ethan clicks the button on the remote and the electric gate starts to open. “How long have you been thinking about this?”

Ethan glances from me to the farm road, back and forth, like he’s trying to solve a puzzle. Given that the majority of the time we’ve known each other I was lying to him about who I was, I don’t blame him for being skeptical.

“I’m not buying that. I’ll teach you, but you have to tell me what brought this on. Are you sure nothing’s happened?”

I give him a big smile and scoot across the front bench of the truck to get closer to him. I can’t tell him. He’ll make me tell Dad and Dad will call the suits and I don’t ever want to see them again. I fought too hard to get this wonderfully normal life and I’m not ready to give it up.

“Everything’s fine. Stop overthinking this. I know I freaked last time but I’m prepared now. I want to learn. I don’t want to be scared.”

I hope I didn’t oversell it.

He moves a hand from the steering wheel to mine, squeezing it tightly. “Just as long as you’re sure. I don’t know if I can handle it if you pass out. That damn near killed me, seeing you on the ground like that.”

And I don’t know if I’ll ever get tired of hearing him talk in that slow, smooth Louisiana drawl or seeing that dimple dig deep into his cheek. This moment, in the truck with him, reinforces why I will not go back to the way things were. I want this life. I deserve this life. But I need to learn how to protect myself. I don’t ever want to be a victim again.

“Does your dad know you want to do this?”

“No. But it’s not like I’m hiding it from him. He wouldn’t understand and I don’t want to try to explain it. He won’t get it.”

The first twenty-four hours after Thomas returned my journal and left the creepy note, I was terrified. I stuck to Dad and Teeny like glue, not willing to let them out of my sight. And Ethan, he knew something was wrong, but I dodged his questions like the seasoned evader I am. There were a million times in that first day that I teetered on the brink of telling Dad everything, but I couldn’t say the words that would surely bring the suits back into our lives. And what would they do, anyway? All they know about Thomas is that he’s some sort of assassin, or killer for hire, or something horrible like that. But that’s it. They would have no idea how to catch him—so they’d probably just toss us back into the program.

After that first day, when nothing else happened, I decided that maybe Thomas did mean exactly what he said in the note: He just wanted me to have my journal back. I know enough about Thomas to know that if he wanted me dead, I would be dead.

Ethan pulls through the front gate of the farm and I rub my sweaty hands down the front of my jeans.

I can do this.

I have to do this.

There are several tractors working in the distance and I spot Ethan’s dad’s truck parked at the barn. I was hoping we would be alone—I don’t need any witnesses if I am, in fact,
not
ready to do this.

Ethan turns off the truck and pulls me in closer, kissing me gently on the lips.

“We’ll start slow. You can hold the gun, load it, get a feel for it. If that seems all right, then maybe we’ll try to fire a few rounds. If you start feeling bad, tell me and we’ll stop. Don’t push yourself on this. You’re safe with me. You just have to put all of the other bad stuff out of your mind.”

I drag him toward me, away from the steering wheel, and crawl in his lap, kissing him deeply. He knows and understands me like no one else ever has and that is a serious turn-on.

It’s not long before we’re totally making out in the front of his truck.

We hear a four-wheeler approach and I jump off Ethan’s lap and move back to my side of the truck just before his dad stops on Ethan’s side. I’m sure the slightly fogged windows give a little clue as to what was happening inside.

Ethan chuckles as he rolls down his window. “Hey, Dad.”

He nods, sneaking a peek at us when he says, “Hey, son. Anna.” He looks as embarrassed as I feel.

“Dad, I’m going to teach Anna how to shoot this morning.”

Mr. Landry jerks his head to me quickly. He also witnessed my meltdown the last time I was around a gun. “Are you sure?”

I nod and Ethan says, “We’re going to ease into it. No rush.”

No rush. I hope he’s right and I won’t need this skill anytime soon.

Tom Barry by Meda Ryan
Werewolf Weekend by B. A. Frade, Stacia Deutsch
Rowan Hood Returns by Nancy Springer
Unspeakable by Sandra Brown
The Danger Trail by Curwood, James Oliver
The Predators’ Ball by Connie Bruck
Seven Year Switch (2010) by Cook, Claire
Did I Mention I Won The Lottery? by Julie Butterfield
The Prophet Motive by Eric Christopherson
A Jaguar's Kiss by Katie Reus