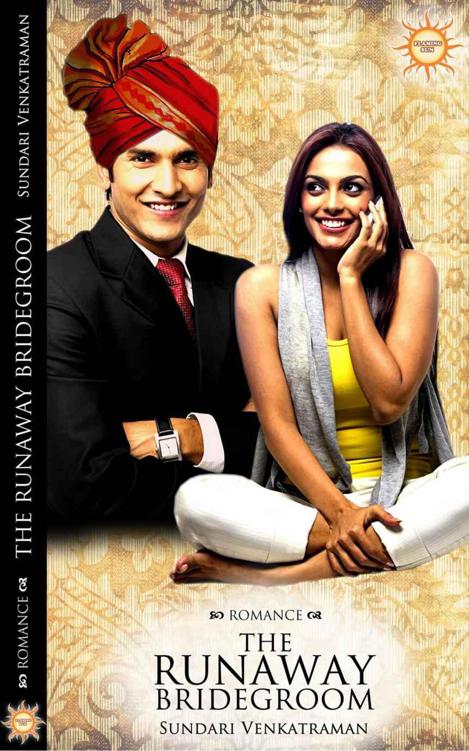 A romance novel by

Self-published in 2014 under the banner Flaming Sun

This eBook is licensed for your personal enjoyment only. This eBook may not be re-sold or given away to other people. If you would like to share this book with another person, please purchase an additional copy for each recipient. If you’re reading this book and did not purchase it, or it was not purchased for your use only, then please return to your favorite eBook retailer and purchase your own copy. Thank you for respecting the hard work of this author.

No part of this publication may be reproduced, stored in a retrieval system, or transmitted, in any form or by any means, electronic, mechanical, photocopying, recording or otherwise without the prior permission of the author-publisher.

Sundari Venkatraman asserts the moral right to be identified as the author & publisher of this book.

This is a work of fiction and any resemblance to real persons, living or dead, is purely coincidental.

I dedicate this book to all those children in India who are victims of child marriage. I sincerely hope that their lives are sorted out as well as Chanda’s and Veerendra’s.

I thank all my fans for the fabulous feedback and acknowledgement to my books.

I thank Rubina Ramesh for being a friend, guide & philosopher. She’s helping me tremendously with marketing my books
.

A very special thanks to Amazon for making self-publishing possible.

Chanda turned around when she heard her mother call out to her. “Chandaaaa—” called Meera in her musical voice and the eight-year-old grinned widely as she ran towards her loving parent. Her friends barely paused in their game as Chanda ran into the cavernous kitchen. Meera gathered her daughter into her arms and hugged her in delight. While Chanda was the fifth child and their first daughter, both Meera and Mohan adored their little girl.

“Come, dear. Freshen up fast. Choudhry Uncle and everyone from their house have come to ask for your hand in marriage. You will have to look beautiful for them. Come.”

Chanda gave her mother a wide-eyed glance, her large black eyes shining with excitement. They looked like freshly plucked grapes on her little round face. “I’m going to get married?” asked Chanda, her voice also portraying her anticipation. A grin almost split the tiny face as she went along with her mother to the first floor of their mansion to get ready to meet her groom’s family.

Not that Veera had come with his parents and grandparents to meet his soon-to-be bride. He was all of thirteen years and was just not interested in tying himself to a little girl. But then, who was bothered about his opinion?

Choudhry
Daadaji
looked at Chanda’s baby face as she peeped from behind her mother’s long skirt. Mohan called out to her, “Come here little one, meet
Daadaji
.”

A bout of shyness attacked Chanda and her steps faltered as she moved towards her father, her eyes on the old patriarch sitting on the huge sofa. She stared at his large moustache, a hint of fear coming into her black eyes. She had always associated a large moustache with harshness. She blinked at the old man hoping that he wouldn’t hurt her, as she moved sideways to her father.

But
Daadaji
was anything but harsh. While his exterior was rough, he was an affectionate person. He looked at little Chanda and thought that she would make a wonderful wife for his handsome grandson. The old man had but one son in Surendra while the latter in turn had three sons and two daughters. Surendra’s eldest son, Jeetendra, all of fifteen, was married to ten-year-old Meena. That had been two years ago. Now, it was Veerendra’s turn.

Daadaji
was a mite worried about the boy. While the rest of the children were easy to handle, Veerendra had always been wild. It was very difficult to make him toe the line.
Daadaji
sincerely hoped that the young brat would settle down after the wedding.
He smiled at Chanda, his big, yellowish teeth gleaming beneath his large pepper and salt moustache, worrying the little girl further. He turned to look at his wife Lakshmi of more than fifty years. She gave a small nod indicating her agreement to Chanda being suitable for their second grandson.

Daadaji
turned to look at Surendra and his wife Sona. Sona had tears in her eyes as she looked at the doll-like Chanda. It was obvious that they were tears of joy as she was totally enamoured by Veerendra’s would-be bride.

They were an uncomplicated family who were quite straightforward. They had not searched far and wide for a bride for the son of the house. They had heard about the Maheshwaris from the relative of a friend. After a couple of weeks of talk, the Choudhrys had decided to give them a surprise visit. They didn’t regret their decision.

Daadaji
spoke, “So, when can we have the wedding?”

Nobody spoke of anyone meeting Veerendra. Then again, no one was surprised by the situation either. Mohan smiled at his guests and soon to be
sambandhis
and promised to go over to their house the very next day to fix everything. What he didn’t utter was that he was curious to meet his soon-to-be son-in-law.

The next day, Meera and Mohan - there were no other elders in their home - went to the Choudhry home in the pretext of discussing the wedding arrangements. They were eager to meet Veerendra.

Veera glared at his grandfather when the patriarch told him to stay back and not go out to play. “My friends are waiting for me,” came the mutinous reply.

Daadaji
smiled wisely before saying, “I know, Veera. But Chanda’s parents are coming on a visit. You will have to meet them.”

Dark velvet brown eyes glowered their dislike at the old man. It wasn’t that Veera didn’t like his grandfather, only the idea of being shackled.

Veera didn’t care for what his brother Jeetendra became after his wedding. The brother who used to play with him all the time had become a responsible man, answerable to another girl. Veera couldn’t stomach the thought that he would have to give up his friends and become a slave to another being, that too, a strange girl.

Meera and Mohan came and visited with them for over three hours, discussing the wedding arrangements. The Choudhrys were going to take a
baaraat
to the home of the Maheshwaris the very next month and the wedding would take place in just three weeks. Mohan was very happy to meet Veera. The boy was handsome and quite tall for his age. He had the makings of a strong man and Mohan hoped that Veerendra and Chanda would have many sons.

THE MARRIAGE TOOK PLACE with great pomp and ceremony. There were about two hundred guests - family, friends and neighbours - who attended the wedding.

The same night, the Choudhry family was shaken when they couldn’t find the second grandson. All of them had returned home without the bride. Chanda was to be brought home later, after a few weeks. Reaching home, they all realised that the boy they had believed to be Veera, was actually his best friend. Beating up Jaggi had been of no use. He had had no clue that Veera was making use of him in such a fashion. The boy had believed it was a game when Veera had insisted that the friend wear his
pagadi
on the way back home.

A search was sent out in all four directions. But no one could find Veera.
Daadaji
swore to whip the boy and later cried for his grandson’s safety. But nothing brought him forth from wherever he had disappeared to.

The Maheshwaris were speechless with anxiety. Their only daughter’s life was spoilt forever. Chanda had been married for barely a few hours and now she had no life. Meera cried her heart out while Chanda looked on, unable to relate to her mother’s woes. The wide-eyed child couldn’t understand what was wrong.

“Veerendra is not there. You don’t have a married life,” said Meera, sobbing.

“What happened, Mama? Is Veera dead?” asked Chanda innocently. In the child’s world, people cried this much only when someone died.

Meera howled all the more, hugging her daughter, who was still in her bridal finery. She shook her head, quite unable to explain the situation to Chanda.

A couple of weeks later, Mohan reached a decision. He couldn’t face the disgrace brought on by the incident of his son-in-law’s disappearance only a few hours after the wedding. He decided to uproot his family and move to Jaipur, where he hoped to get lost in the anonymity of a big city.

A tearful Meera hoped that the move would bring about the peace they had lost.

Chanda stood in the middle of the room, her arms folded, feeling lost. She was doing her final year Bachelor of Management Studies (BMS) in a Delhi college and lived in the hostel.

The shift to Jaipur had done the Maheshwari family a lot of good. It had taken them a few years to adjust to the radically different way of life in the city, but in the end the adaptation had been quite smooth as Mohan was quite forward in thinking. Meera listened to whatever her husband said.

Death at the Cafe by Alison Golden
The Guardian by J.L McFadden
A Cup of Murder by Cam Larson
El 18 Brumario de Luis Bonaparte by Karl Marx
Touch the Horizon by Iris Johansen
To Seduce a Scoundrel by Darcy Burke
Rendezvous by Nelson Demille
Master of Craving by Karin Tabke
The Dark Art of Persuasion by Ashe Barker
Enchanted Ever After (Mystic Circle) by Owens, Robin D.