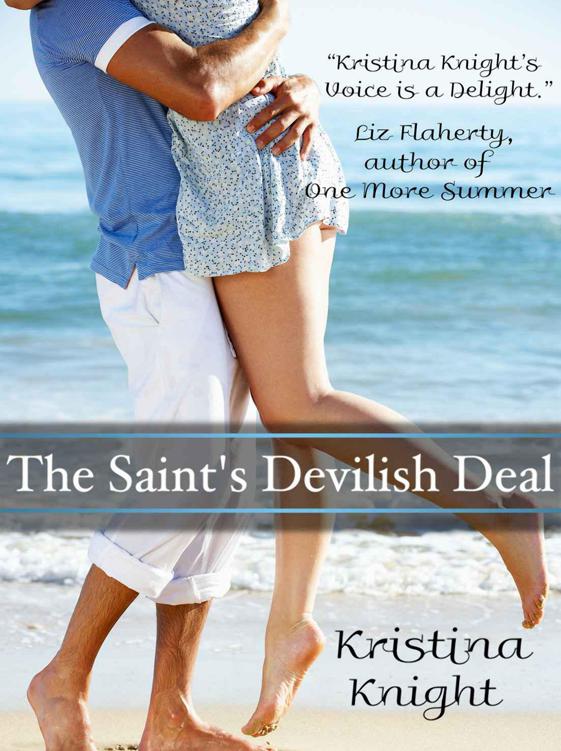 This book is sold subject to the condition that it shall not, by way of trade or otherwise be lent, resold, hired out or otherwise circulated without the prior consent of the publisher in any form other than that is which it is published and without a similar condition including this condition being imposed on the subsequent purchaser.

Other Titles by Kristina Knight:

What a Texas Girl Wants

What a Texas Girl Needs

What a Texas Girl Dreams

For Gladys and Cornelia, who always had a story handy

For Cleon, who encouraged me to write my own

For Kyle, who always believed

The outer office door opened and shut with authority and the hot lawyer’s office instantly shrank in size. Esmerelda Quinn twisted in her chair as Santiago Cruz sauntered inside. When she’d left him on the beach outside Casa Constance, she’d expected him to at least put on khakis for the meeting. But no, no one told Santiago how to dress or when to appear for meetings. Now, when she needed him to present a united front regarding the villa, he showed up twenty minutes late wearing the same wet board shorts and tee he’d worn on the beach.

And looking just as delectable.

Esme watched, entranced and annoyed for being so, as Santiago shook his head, longish, black hair caressing the strong column of his tanned neck. She couldn’t stop her tongue from wetting her lips as he crossed to the leather sofa. Which was ridiculous; he was just a man. A luscious specimen of man but just a man nonetheless.

After their amazing crash-and-burn romance four years ago and her latest boyfriend-mistake she should have been inoculated against the likes of him. Jason’s face appeared in her mind, smiling as he told her being his other woman just meant she got the best of him with none of the hassle of being a boring housewife. She shook herself. No thinking about that. She was all business now.

Focus on the villa. No distractions.

“Santiago, I feared you would not make it.” Señor Velazquez, the lawyer, stood and reached out to pump Santiago’s arm in a quick greeting. Not even a hint of disapproval at his tardiness or dress. Typical.

To the rest of the world he was a bad boy world champion surfer, and here in Puerto Vallarta Santiago also made his own rules. The sons of Eduardo Cruz operated on their own time clock, proper business etiquette be damned. Esme knew enough about Santiago to look beyond the worn board shorts and what she knew about the man made her blood run cold. He wasn’t just a surfer, he had a string of investment properties around the globe. Just one more reason to be wary of him being here now; she wouldn’t allow Casa Constance to become another of his vacuous properties.

She ran her index finger along the neckline of her silk blouse, praying for a little relief from the oppressive heat Santiago brought into the room with him. Glancing up she saw the fan was, indeed, still moving. The air itself seemed to hold still for him.

“. . .and so Constance wants you to run the villa, with Esmerelda, for the next six months. Three with you in charge, three with Esme running things.” Velazquez’s tone said Esme running anything would end in disaster. She gritted her teeth to stop herself reminding him of her accomplishments. “At the end of that time, a decision will be made as to the future of Casa. Although, I have to say, based on the bank balances and outstanding loans, I don’t see much hope for it.” Velazquez tapped the file closed and clasped his hands together on the desk blotter.

“I will not vacate my property to leave him—” she jerked her thumb toward the pseudo-surfer currently slouched on the lawyer’s Spanish leather sofa “—in charge for five minutes, much less the three months mentioned in that letter.”

Since being summoned to Puerto Vallarta, Esme’s world had turned topsy-turvy. A villa employee had met her at the airport gate, delivering a single-page note from Aunt Constance, telling Esme that Santiago would help her run the villa until Con’s return from a private medical facility. Esme had barely known Constance was sick and now she was gone before Esme could even set down her suitcase.

Her stomach rolled. This was her fault. Not Constance's illness, that was simple bad luck, but if she'd been more attentive to her aging aunt, maybe she could have done. . .something. Anything to keep the villa on solid financial ground.

Keep it out of the Cruz family's greedy hands. She needed the villa. Needed its strength. So did Constance and Esme would do anything to protect it.

She spared another glace toward the sofa. Was Santiago paler than when he’d walked in? Couldn’t be. No, his casual posture in the corner of the sofa belied any of the surprise that was currently making it hard for her to breathe. The Patek Phillipe watch on his wrist, costing more than her entire ensemble, might be the only vestige of the businessman she knew lurked under the casual surfer's clothes—but that man still existed. He wasn’t surprised and she shouldn’t be. Aunt Constance always liked a little healthy competition, she reminded herself.

But a vacation resort needed stability to grow, not one manager one week and another the next.

“Señorita Quinn, I know this comes as a shock, but Constance was very clear before she left for her extended rest.” The lawyer’s voice brought Esme abruptly back to the present. His glance skipped from her face to Santiago’s and back again as he clenched his jaw.

Great, she’d annoyed the only man who could reverse this ridiculous situation.

“As long as we’re both on the property, though, we meet Constance’s demands, correct? He can stay on – as the guest he is - while I run things?”

“We all know the highest bidder at any auction will be Eduardo Cruz. Why would I work with one Cruz while another is already waiting to take my property?” Crossing her arms over her chest, Esme sat back. Santiago shifted and she cut her eyes to the sofa, focusing on her nemesis. “Look, you may have conned Aunt Constance with your surfer boy routine, but I don’t buy it. You don’t want to run a hotel. You don’t even want to be here, so why don’t you go buy a coffee downstairs while the adults talk?”

The lawyer gasped but Santiago only grinned. Just like him not to get an insult when aimed directly at him. Or his feet, since she found it hard to look directly into those deep brown eyes without wanting to drown in them.

“I see the kitten has sharpened her claws,” he drawled. Each syllable rolled off his tongue like honey. Despite the heat of the day, Esme shivered.

Annoyed with herself, she snapped, “Yes and this time around I’m willing to use them.”

Seagulls began flapping around in her tummy at the glint of heat in his eyes. God, she thought she was past the point of being charmed by The Saint.

With effort she turned back to the lawyer. “There is no way my aunt would have set her villa up for failure like this. I need to speak with her.”

She should have come running home the second Constance told her Santiago had moved in. God, I shouldn’t have stayed away so long. Although her job was the perfect position to learn everything her business degree didn’t teach her about hotel management, she was so busy running the Northern California B&B she’d neglected the only family she had. The aunt who was her rock after the tragic deaths of both her parents. She couldn't fail Constance, not after all that Aunt Con had done for her.

“Did they not teach you listening skills in your fancy university up north?” Santiago’s words flowed from his well-shaped mouth like molten chocolate. Ignoring the rumbling in her tummy, she vowed to stop comparing Santiago’s speech to her favorite comfort foods.

“Velazquez has said ten times already Constance is in need of rest now.” Santiago’s voice focused her back on the task. “The cancer has been eradicated, and the private hospital will ensure she gets that rest. Causing her stress because you don’t want to share your toys-”

“The villa isn't a toy-” she interrupted but Santiago kept talking.

“-isn’t exactly what the doctor ordered, now is it?”

“Shut up.” Esme immediately wished the words back. She put her fingers to her temples. It wasn’t his fault that she hadn’t known how sick Con was; it was her own. She had to stop reacting to him and starting acting for her own benefit.

“I see your profesors universitarios did teach you incredible conversational skills, though.” That smug grin widened and his eyes danced. Esme’s toes curled against the leather of her Jimmy Choos.

Don’t react. Don’t react. With effort, Esme ignored the tingling in her spine at the sound of his voice. She would not be charmed by The Saint or baited into more snide arguing. Not. Not. Not.

Velazquez’s head swiveled between them as if he watched a tennis match. Esme wanted to crawl under her chair. Taking a deep breath, she refocused on the lawyer. “I only need to talk to her for a moment. Just to make sure this is what she wanted. A phone call, surely, wouldn’t cause her too much stress?”

Santiago tsk-tsked from his corner of the sofa. Esme clenched her jaw but managed to keep her gaze glued to the lawyer.

“Señora Rios did not leave her contact information with me.” He wiped his brow with a limp handkerchief. “She did leave you each a letter, but asked that you not read it until the initial three months have passed.”

“We will wait, then, as Constance wished,” Santiago said.

She whirled on him. “I realize your type never objects to a game, but sharing a villa with you for the next six months isn’t my idea of a good time. It isn’t even my idea of what the nice side of Hades looks like.” How could she be attracted to a man who acted so. . . so. . . superior every flipping second? Esme returned her gaze to the lawyer. “I’d like to see my letter.” She held out her hand, barely keeping it from trembling—in anger, she told herself, not fear. Not because she felt abandoned in a new universe without even a topical map for direction. But Velazquez didn’t budge.

“Dios, you were never this uptight before you left Mexico for your fancy boarding schools and university,” Santiago said. “We’ll read our letters as Constance requested, after three months.” Then he firmly grasped Esme’s elbow, pulled her to her feet, and frog-marched her out of the stuffy office before she could protest.

The air on the street was blessedly cool, a brisk breeze blowing in from the ocean, but that did nothing to cool Esme’s temper.

“How dare you? You do not speak for me, Santiago. You didn’t when we were kids, you didn’t in Napa, and you won’t now.” She jerked her arm from his grasp and turned back to the door but he stopped her.