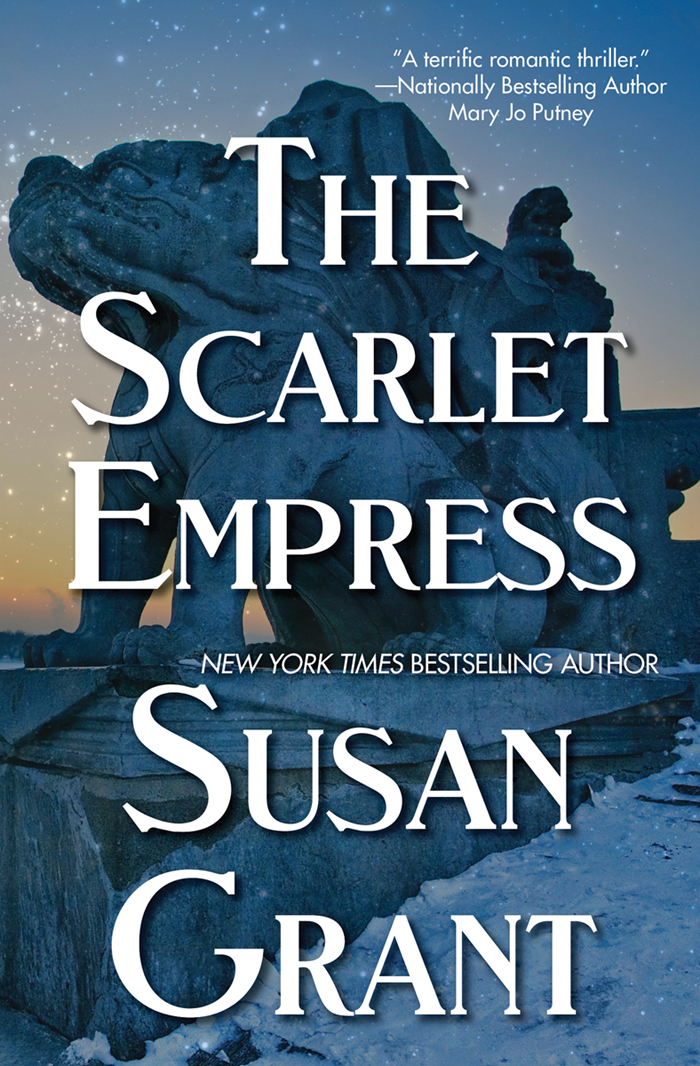 “A roaring conclusion [to the
2176
series] . . . a terrific romantic thriller and a deeply moving tribute to liberty.”

THE LEGEND OF BANZAI MAGUIRE

“Filled with humor, suspense, and romance,
The Legend of Banzai Maguire
is not to be missed.”

“Ms. Grant . . . absolutely blew me away with
The Legend of Banzai Maguire
. . . . It is fast-paced, keep you on the edge of your seat reading.”

“Sexy humor and playfulness make this tale of romance and political intrigue a hot buy!”

“A fascinating storyworld. . . . I strongly recommend
The Star Princess
as a thoroughly enjoyable experience.”

“Susan Grant continues her stratospheric ascent with her latest, combining action and romance in a gripping, thought-provoking package.”

“Political intrigue, deadly intentions, and power struggles give the plot of
The Star Prince
the depth and passion that is fast becoming Susan Grant’s trademark.”

“Drop everything and read this book!”

—Mrs. Giggles from Everything Romantic

“The best romance I read this year!”

“A delightful, sexy story [that] you won’t want to put down. A real winner!”

“
Once a Pirate
is a fast and rollicking adventure. Following [Grant’s] career as she hones her craft will be a pleasure!”

There! A shadow moved under the water. Long and dark, it glided beneath the surface. Cam almost swallowed her heart.

Powerful arms propelled the bounty hunter through the water as easily as a fish. As he stopped to search the boulders along the rim of the pool, his long black hair fanned out, undulating with his movements. He pushed off again, his stomach flex-ing. A set of six-pack abs warned Cam that he’d be no easy man to overpower. All the more reason to cork him on the first try. A head start was going to be very important in this match.

She readied her rock for striking.
Closer, sugar, come a little closer to me.
The second his head came above water, she’d whack it like a coconut and run like hell.

THE LEGEND OF BANZAI MAGUIRE
by Susan Grant

DAY OF FIRE
by Kathleen Nance

THE SHADOW RUNNERS
by Liz Maverick

THE POWER OF TWO
by Patti O’Shea

Other books by Susan Grant:

THE ONLY ONE
(anthology)

All rights reserved. No part of this book may be reproduced or transmitted in any form or by any electronic or mechanical means, without the written permission of the publisher, except where permitted by law. The scanning, uploading, and distribution of this book via the Internet or via any other means without the permission of the publisher is illegal and punishable by law. Please purchase only authorized electronic editions, and do not participate in or encourage electronic piracy of copyrighted materials. Your support of the author’s rights is appreciated.

This is a work of fiction. Names, characters, places, and incidents are either the product of the author’s imagination or are used fictitiously. Any resemblance to actual persons, living or dead, events, or locales is entirely coincidental.

The “DP” logo is the property of Dorchester Publishing Co., Inc.

Visit us online at
www.dorchesterpub.com
.

My heartfelt thanks to authors Patti O’Shea, Liz Maverick, and Kathleen Nance for agreeing to be part of the 2176 project; to Chris Keeslar for the hard work in helping make it happen; to Dorchester Publishing for going with my idea in the first place; to Susan Squires, Ronda Thompson, and Pamela Britton for their equine expertise; to Cindy Holby and Patti O for spur-of-the-moment reads; to Mary Jo Putney for her lovely quote; and to Màili/Holly for coming up with a fantastic title for this finale book. Finally, my deepest gratitude goes to all the readers who came along on this wild ride. Your support and enthusiasm mean the world to me.

Life will throw you a ninety-degree left turn when you least expect it, but that’s no excuse to travel along riding the brakes, I always say. If you live too carefully, you risk losing the thrill of the journey. I know. I had two chances to navigate life’s path, and each time the ride got wilder.

My name is Maguire, Bree Maguire. Most know me as “Banzai,” my fighter-pilot call sign, the earning of which is a story in itself. My gutsy Japanese-American great-grandmother’s actions may have won me the label, but my flying was the reason it stuck. Debate all you want about the fine line between “insane” and “fearless,” but me, I laughed at danger. As a pilot I pushed the limits; I skated on the edge. The more risk involved, the more eager I was to tackle the mission. I was everything I wasn’t in my personal life, where I preferred to proceed with caution, yellow warning lights flashing.

One long-ago wintry morning, my wingmate and I took off from our airbase on a United Nations–sanctioned patrol
sortie known as Operation Keep the Peace. We expected the usual drill: a flyover of the North Korean side of the border, then of the Southern side, a few easy hours carving racetrack patterns in the sky. As flight lead of a pair of F-16s, a position I’d earned through rank and experience, I’d oversee the overall handling of the mission—a routine mission. In the spirit of sudden sharp turns, it turned out to be anything but.

Shot down and captured by a mad scientist, my wingmate and I slept through almost two centuries imprisoned in biostasis deep in a cave before anyone figured out we were there. When I woke, the year was 2176 and everyone I knew and loved was dead.

Or was missing. My wingmate was gone, and no one knew what had happened to her. I vowed to find out, no matter how long it took. Not only was I the flight leader and responsible for her safety, Lt. Cameron “Scarlet” Tucker was my closest friend.

Cam was a top gun soaked with Southern charm. With a Southern-belle mother and an army-general father, she was supposed to have gone straight from charm school to hosting soirees for a West Point–grad husband. Instead, she set her sights on the U.S. Air Force Academy, pilot training, and fighter school, taking distinguished grad honors at all three. Few seemed to grasp Cam’s potential, and I loved nothing more than watching her smash expectations. She was never one to give up. She’d fight until the end. That was why, no matter what anyone told me about the hopeless odds of finding her, I knew she was alive and looking for me, too.

Complications—big ones—kept us apart. Our new world was nothing like the one we’d known. I was the “guest” of Prince Kyber, the acting emperor of Asia. Gone was the United States, the country we’d served and loved, swallowed
up by a meganation called the United Colonies of Earth that for all its foibles had actually delivered on the promise of stability and world peace. It stretched across the globe, with “colonies” of Mexico, Antarctica, South America, and the Middle East. The cost? Liberty, free speech, and a government elected by the people.

Someone wanted to change all that, though. A mysterious freedom fighter I knew in those days only as the Shadow Voice, or the Voice of Freedom, was a defiant advocate for liberty who seemingly granted me none of my own by sweeping me into the heart of a revolution.

A revolution that began as a tax revolt, like four hundred years before.

But this wasn’t just any tax; nor was it just any revolt. Like everywhere else on Earth, in the UCE the Interweb was the main source of communication, entertainment, education—everything. In dire need of funds, the overextended nation’s bureaucrats had slapped a tax on the Interweb to squeeze money from its most powerful colony, Central—what had once been the contiguous United States. Like the British in pre-revolutionary America, the bureaucrats seemed indifferent to the almost universal resentment the new tax created.

Omerta (The DeLuca Family #1) by K. A. Ware
Guardian Bears: Marcus by Leslie Chase
Swish by E. Davies
Swords and Crowns and Rings by Ruth Park
Before by Nicola Marsh
Color: A Natural History of the Palette by Victoria Finlay
The Invisible Wall by Harry Bernstein
Clean: The Revolutionary Program to Restore the Body's Natural Ability to Heal Itself by Alejandro Junger
Roping Ryan (The West Series Book 6) by Jill Sanders
The Lurking Man by Keith Rommel