Read The Second Spy: The Books of Elsewhere: Volume 3 Online

The Second Spy: The Books of Elsewhere: Volume 3 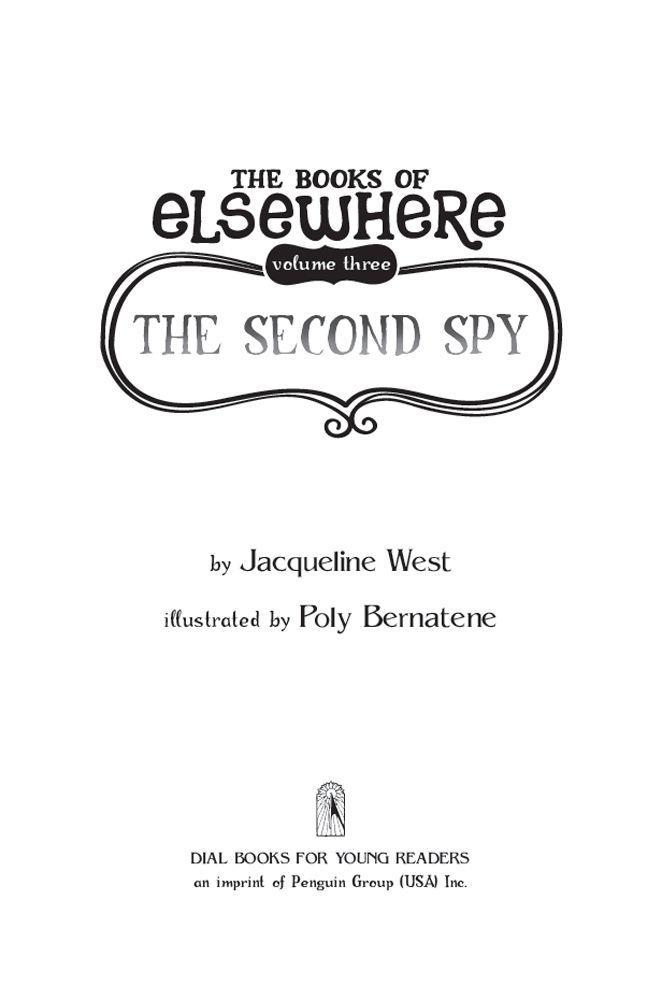 THE BOOKS OF
ELSEWHERE

THE BOOKS OF
ELSEWHERE

The second spy / by Jacqueline West; illustrated by Poly Bernatene.

Summary: After plummeting through a hole in her backyard and finding

herself once again in the room of mysterious jars, eleven-year-old Olive

unwittingly releases two of Elsewhere’s biggest, most cunning, most

For Ryan,
who makes everything better
—JW 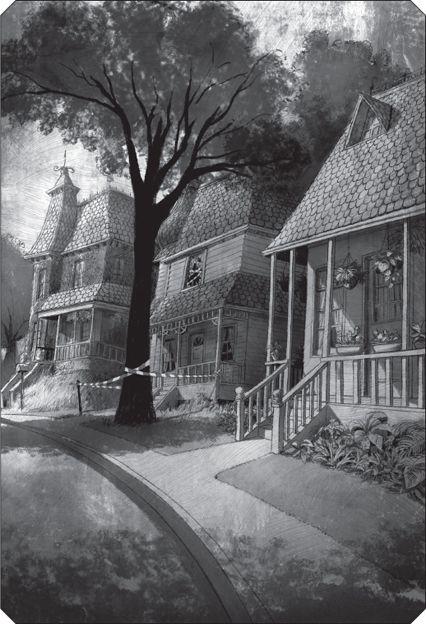 I
F YOU BELIEVE that death is about to spring upon you at any moment, you won’t spend much time watching television. You won’t devote a lot of thought to bathing or tooth-brushing, either. Even things you once enjoyed, like reading, doodling, or daydreaming, will slide right off of your daily to-do list.

If you believe that death is coming for you, you’ll do a lot of jumping around corners. You’ll turn on all the lights in every room you enter, even on bright August afternoons. You will get surprisingly good at walking backward up staircases. You will never forget—not even for a minute—that doom could be waiting just through any doorway.

Your life will revolve between two things: spending as much time as possible with those you care about, and
hiding.

Fortunately for Olive Dunwoody, who was whiling away the end of the summer in this particularly uncomfortable situation, she had the perfect way to do both.

Each morning, as soon as her parents were busy with their own work and worries, Olive put on the pair of antique spectacles that hung from a ribbon around her neck. Then she stepped from her bedroom into the hallway of the old stone house on Linden Street and watched the paintings that lined its walls ripple into life.

Painted grass waved in an intangible wind. Painted trees twitched. Painted people moved and blinked and stared back at her from the other side of their canvases.

Grabbing the edges of the picture frame that hung just outside her bedroom door, Olive would squish herself through the wavering, jelly-like surface, fall with a flop into the misty field, and bolt up the painted hill to find her friend Morton.

An old man’s lifetime ago, Morton had lived with his family right next door to the old stone house on Linden Street. No one who lived right next door could have helped but notice something odd about the place…and about the McMartin family, who lived in it. Finally, the day had come when Morton’s family knew too much.

Aldous McMartin, the painter and patriarch of the McMartin family, got rid of Morton by trapping him inside a painting. Morton’s sister, Lucinda Nivens, who had hoped to be accepted into the McMartin family and taught their magical secrets, had eventually been betrayed and killed by the people she served. As for Morton’s parents, they had vanished. No one knew where.

But she wasn’t about to tell.

To begin with, Annabelle McMartin was dead. She’d finally croaked at the age of 104, the last twisted twig on the McMartin family tree. Because she had died without an heir, all of the McMartin family treasures were left to clutter the corners and hang from the walls of their old stone house on Linden Street. The inconvenience of being dead should have kept Annabelle and her ancestors from causing anyone any trouble. But that was not the case. Not in
this
case. For among the many odd, dusty relics the McMartins had left behind were their portraits—magical, living, conniving portraits, painted by Aldous and craftily hidden in the house’s depths. These portraits wanted nothing more than to take their house, with all its secrets and powers and history,
back.

Olive had discovered this in the most unpleasant of ways.

The knowledge that the living painting of her home’s former owner was on the loose, intent on revenge, was what had Olive jumping around corners and backing up staircases. Sometimes her eyes played tricks on her, and she would catch the flash of a painted tendril of long brown hair in the gleam of a wooden banister, or the sheen of a string of pearls floating above an empty chair. Annabelle’s too-sweet, too-still smile seemed to glitter from the shadows of the house’s darkened rooms.

This usually happened when Olive was alone.

Olive tried to be alone as little as possible.

When she was with Morton, she felt a bit less frightened. Her fear seemed to spread out between them, like a dose of awful medicine divided into two spoons. Together, Olive and Morton would slip through the creaking, cluttered rooms, climbing in and out of Elsewhere. They searched painting after painting for some sign of Morton’s parents. They questioned every painted person they met. They flipped over every painted rock (the rocks always flipped themselves hurriedly upright again), they peered inside painted windows, and they peeped through the keyholes of painted doors. But when every rock had been flipped and every keyhole had been peeped, they still hadn’t found a single new clue.

Fortunately, the search mixed some fun into the frustration. Sometimes Olive and Morton visited
the painting of a ruined castle, where a painted porter happily led them on tour after tour. They scattered chubby pigeons on a painted Paris sidewalk. They clambered through the frame of a painted ballroom and danced to the music of the out-of-practice orchestra. If the house’s kitchen was deserted, they dove into its painting of three stonemasons and played with Baltus, the large, shaggy dog that Olive had rescued from another painting. When they were feeling especially brave, they even went boating on the smooth silver lake where Annabelle had once left Olive to drown.

Often, one of the house’s three guardian cats would accompany them. The cats could slip in and out of Elsewhere as easily as they slipped in and out of the house’s many rooms. Olive would spot the spark of green eyes in the distance, across the painted waves of a river or between the brush-stroked petals of a blooming garden, and she would feel her fear spread even thinner, knowing that the cats were watching over her.

But nothing could lift the fear away completely.

And as the last days of summer tiptoed past, something else was creeping up on Olive. Something that swelled and darkened like a bruise in the back of her mind. Something even bigger and blacker and chillier than her own untimely and quite-possibly-impending death.

A
FAMOUS POET ONCE wrote that April is the cruelest month. Olive knew this because she had come across the poem somewhere in the dusty library of the old stone house on Linden Street. She hadn’t understood most of the poem, but she remembered the line about April. She remembered it because it was so obviously untrue. Olive knew—as all kids know—that the cruelest month is September. One morning, you wake up to a sky that still feels like a summer sky, and a breeze that still feels like a summer breeze, and you smile, looking forward to a whole day of freedom—and then your mother shouts up the stairs that you’re already running fifteen minutes late, and if you don’t get a move on, you’ll miss the school bus.

This was just what happened to Olive. Except she didn’t wake up looking forward to a day of freedom and adventure. She woke up exhausted, with a cramp in her legs from a night of dreams about a furious witch chasing her around and around a giant hamster wheel. As she squeezed Hershel, her worn brown bear, Olive told herself that these had been nothing but nightmares. The problem was, except for the giant hamster wheel bit, Olive’s nightmares might come true.