Read The Secret by the Lake Online

The Secret by the Lake 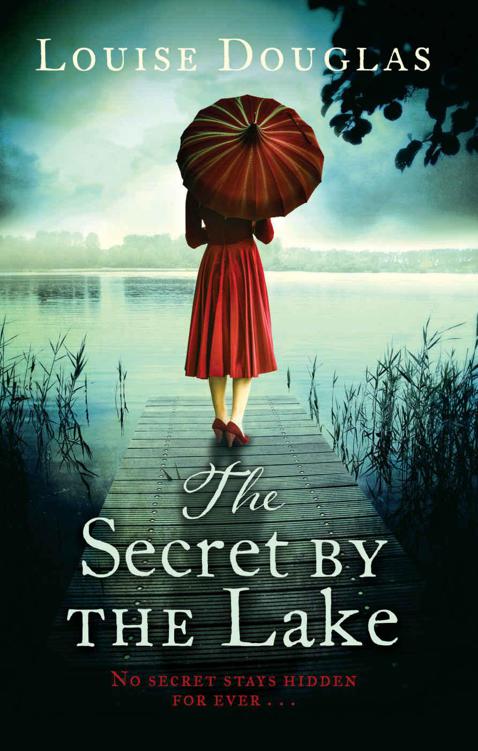 Amy’s always felt like something’s been missing in her life. When a tragedy forces the family she works for as a nanny to retreat to a small lakeside cottage, she realizes she cannot leave them now.

But Amy finds something unsettling about the cottage by the lake. This is where the mother of the family spent her childhood – and the place where her sister disappeared mysteriously at just seventeen.

A WEB OF LIES

Soon Amy becomes entangled in the sister’s story as dark truths begin to rise to the surface. But can she unlock the secrets of the past before they repeat themselves?

The Secret by the Lake
Louise Douglas

For my cousins: Julie, Mark, Richard,
John, Paul, Sarah and Andrew, and their
families, with all my love xxxxxxx

IT WAS A
beautiful thing, a heart-shaped pendant – a ruby surrounded by tiny diamonds, set within a gold clasp in the shape of two hands joined together – and dangling from a slender gold chain.

‘It’s more than a hundred years old,’ Madam had explained some weeks earlier, ‘and very precious. It’s been in my family for generations.’ Madam’s jewellery, normally kept locked in the safe, had been laid out on a velvet cloth spread over the table in the dining room, along with her silver candlesticks, her Victorian tea-set and various other items of high value. They were making an inventory ‘for insurance purposes’, she had said, although that wasn’t the real reason. The real reason was because she wanted to remind her young husband which side his bread was buttered.

The housemaid was holding a pen and notebook.
Ruby pendant
, she wrote under the column headlined:
D
ESCRIPTION OF ITEM
. ‘Approximate value?’ she asked the older woman.

‘At least one hundred guineas.’

100 guineas
, the girl wrote. The pendant lay on the ink-blue cloth beside its box. She could not properly see the colour of the stone. She reached out towards it; Madam immediately tapped her hand away.

‘No, no, you’re not to touch it, it’s awfully delicate,’ she snapped.

There were a great many things in the grand house called Fairlawn that the housemaid was considered too heavy-handed to touch.

Now that same girl sat on the trunk of a huge oak tree that had recently fallen into a grassy hollow at the side of the lake. In front of her the great expanse of water lay flat, echoing the light in the sky, shivering in the breeze and disturbed every now and then by fish rising to feed on myriad tiny flies that hovered inches from its surface. Sedge warblers were wading amongst the fringing reeds and the willows dipped their pale leaves down between the yellow iris to meet their own reflections. Cow parsley and nettles grew around the fallen branches of the tree, and pink and blue wildflowers lay in scented drifts. The midges danced in their thousands.

The girl loved this cool, dappled place. She thought of it as somehow blessed.

The sun was bright in the clouds just above the horizon. It was growing late. She was waiting for her love. She looked about her, but all she could see were the trees and the lake; she listened, but all she heard was birdsong and the distant clopping of a horse crossing the dam at the end of the reservoir. Perhaps he was having trouble getting away. He often did.

She slipped her hand in the pocket of the ugly brown dress that Madam insisted she wear to work, took something out, glanced furtively around again, and then uncurled her fingers … and there was the ruby pendant, nestled in its delicate gold chain. She held the necklace up so that the diamonds caught the sunlight and fractured it into tiny splinters. Then she shut one eye and held the ruby close to the other, so that all she could see was the pure colour, and the way light cut through the blood-red interior of the stone. It was as if she were inside it, caught inside the jewel.

There was a sound to her right, the snap of a twig underfoot. She closed her fingers around the pendant and looked over her shoulder. It couldn’t be him, he always whistled to let her know he was coming. She crouched down amongst the branches of the fallen tree, hiding behind its leaves and shadows. She peered through the greenery and her heart raced in despair when she saw who it was. The man was walking along the path that crossed behind the hollow. He stopped at the opening and stood for a moment with his hand raised to shield his eyes from the sun, looking out over the lake. He had taken off his jacket and was carrying it over his arm. The girl could see the braces pulled tight over his shoulders, the redness at the nape of his neck and its sinews, sweat glistening on his forehead, his thick, black hair.

She held her breath. She did not move. Her heart thumped inside her chest. He was so close she could see the black mole on his neck, the individual hairs of his beard; she could smell him, even over the hot smell of the mud at the water’s edge. If he took another step he would be upon her. She braced herself, prepared for the worst, but then she heard a voice in the distance calling him. He hesitated, but the call came again and this time he turned and went back the way he had come. She let out her breath and leaned back against the tree.

He must have seen her walking towards the lake and followed her. What if he had been watching her all along? What if he had seen her admiring the pendant? Could he have seen it? Might he have realized what it was?

‘No,’ she told herself. No, even if he had seen her sitting on the trunk, he would have been too far away to see what she was holding. He couldn’t possibly have recognized the pendant.

IT HAD BEEN
a glorious spring, warm enough to swim in April, and the day’s damp towels were pegged on the washing-line in the garden behind the lovely old French farmhouse, the place where I’d spent my last ten summers with the Laurent family. Bicycles were stacked against the back wall, and tennis racquets and balls were heaped by the door. The air smelled of the settling dew, of the lovage and lavender that grew wild amongst the pine trees on the dunes, of summer’s approach. The beach stretched pale, the waves frilled with silver as they tumbled and rolled on to the sand, and the sea beyond wrinkled and shifted, moonlight sliding over its surface like oil in a pan.

We were wrapped in cardigans, Viviane and I, sitting in the hollow of the dunes. The sand that had been warm earlier was cold now beneath our bare feet. The child was unusually quiet. She wrote her name in the sand with her finger and then took a handful and trickled it over the letters until the word disappeared. She moved closer and rested her head on my shoulder. I put my arm around her and pulled her into me; we settled into the warmth of each other, as we always did, as we had done for all of her life. I had never felt such love for anyone, and I’d never felt such sadness either. I had always believed that I would never have to leave her. I thought we would be together, always.

‘What time are you going tomorrow?’ she asked.

‘I wish you weren’t going.’

I couldn’t tell Viviane how I was dreading the impending separation from her, and from her parents, Julia and Alain. I could not explain that I didn’t know how I would muster the strength to tear myself away from the family I had loved so deeply for ten years, ever since Vivi was a baby. Instead I rested my cheek against the top of her head and breathed in the salty smell of her hair, committing the moment to memory so it would be there when I needed it later, when I was alone.

‘
Why
do you have to go?’ Viviane whispered.

‘I’ve told you, sweetheart. My grandmother is ill and my father needs me at home; there isn’t anyone else to help him.’

‘And what about me? What will happen to me?’

‘It won’t be the same at all.’ Viviane picked up a twig and dug the point of it into the sand. She concentrated on this for a moment and then added: ‘At least I’ll still have Emily. Emily wouldn’t leave me.’

I smiled and ran my hand the length of her back. ‘I thought
you
had left
her
,’ I said. ‘I thought you’d decided you were too big for imaginary friends now that you’re almost ten.’

Viviane shrugged. She flicked sand into the air with the point of the twig.

There had been a time, not so long ago, when I’d had to lay a place for Emily at the table, when Julia, Alain and I had to be careful where we walked in case we accidentally stepped on Emily’s toes, when, at bedtimes, I was obliged to read a story to Emily and kiss her goodnight, along with Viviane. Lately, though, her name had hardly been mentioned and Viviane was less inclined to wander off alone, her hand holding an invisible hand, her lips moving as she carried on both sides of a two-way conversation. Once or twice I’d been surprised and amused to catch myself feeling sorry for the imaginary friend whose place in Viviane’s affections was being superseded by tennis lessons and new friendships, a passion for music. That evening, I was actually relieved to hear that Emily was still part of Vivi’s life. At least she would have Emily’s company when I was gone.

I kissed her head.

‘It’s late now, darling, and it’s getting cold. We ought to go in. Your mummy will be wondering where we are.’

I pushed myself to my feet, held out my hands to pull Viviane up, and then dusted the sand from my shorts. Viviane stood and wrapped her arms around my waist.

The night was still and lovely. The sky was full of stars, the Milky Way draped across the firmament so there seemed almost more light than darkness. Moon shadows stretched long and low across the sand, the wind breathed amongst the pine trees, the needles whispered. I looked for one last time towards the sea and I took hold of Viviane’s hand and I felt as if my heart was breaking.

The Storm That Is Sterling by Jones, Lisa Renee
The Sky is Falling by Kit Pearson
Renewal 6 - Cold by Jf Perkins
The Girl Who Never Was by Skylar Dorset
Mr. Murder by Dean Koontz
Earth Blend by Pescatore, Lori
Flying On Instinct by L. D. Cross
Code Orange by Caroline M. Cooney
Carpe Diem by Autumn Cornwell
This is a Book for Parents of Gay Kids: A Question & Answer Guide to Everyday Life by Dannielle Owens-Reid, Kristin Russo