Read The Secrets of a Courtesan Online

The Secrets of a Courtesan 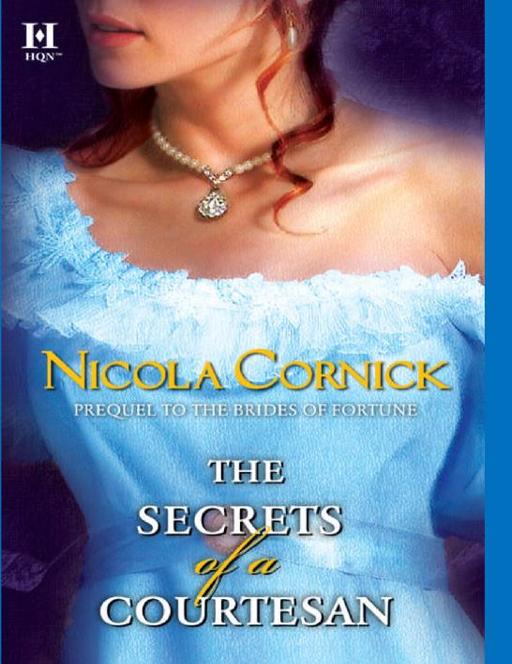 The Secrets of a Courtesan

I write to you in absolute confidence, requesting your assistance on a matter of national security.

Mutual acquaintances tell me that you are an utterly sound fellow. I am sure this is the case

because I knew your cousin at Eton. So, Rowarth, here is the situation. For some time now this

department has been investigating the criminal activities of one Warren Sampson, a mill owner

Riding of Yorkshire. Sampson is suspected of encouraging civil unrest and sedition and it is

imperative
that we put and end to his influence.
Imperative
, I tell you. The man is a blackguard,

an utter scoundrel. And now we may have found a way but it is a matter of considerable

delicacy. It involves a certain Mrs. Eve Nightingale or, as you may remember her, Eva Night…

Pray, call on me at your earliest convenience so that I may acquaint you with your task.

Eve Nightingale had never believed that her past would catch up with her. She had run too far

and hidden herself too well to be found. And then she saw Alasdair Rowarth, Duke of Welburn,

striven for was in danger.

Eve had been shopping, browsing amongst the market stalls, taking her time to chat to the sellers

and enjoying the sunshine. The winter had been long and bitter with so much snow that for a

time the village, so high in the Yorkshire dales and fells, had been cut off from the outside world.

Now that spring had finally arrived it had brought an influx of visitors, for Fortune’s Folly was a

spa of some note, not as famous as the local town of Harrogate, but with health-giving mineral

waters that were said to be far less disgusting to drink. And on this May morning the square was

full of townsfolk and visitors taking the air, gossiping and strolling, perusing the goods in the

shop windows, the ladies’ parasols a forest of bright colors against the sun, the gentlemen

elegant in jackets of blue and green superfine. There was a sense of brightness and hope in the

air after such a long and gloomy winter.

basket when she felt a strange prickle that raised the hairs on the back of her neck. It was the

unmistakable sensation that she was being watched. She turned slowly and met the dark gaze of

a gentleman who was standing on the opposite corner of the street.

moving. That, and the fact that he was looking directly at her with a gaze so focused and intent

that she could not escape the force of their connection. His head was uncovered and in the spring

sunshine his hair gleamed with the colors of fallen leaves, bronze and auburn and dark gold. His

eyes looked watchful, conker brown beneath straight, dark brows. He was very tall with a hard,

handsome face as unyielding as the local stone. It was given even more character by high,

slanting cheekbones and a cleft chin that looked the essence of stubbornness.

For a moment Eve was utterly unable to accept the evidence of her own eyes. Five years had

passed; five very long, difficult, painful years, since she had seen the Duke of Welburn. When

she had run from him, run from London, she had thought never to see him again. Yet here he

was. He had found her. She, who had never wanted to be found.

again and began to race. He held her eyes with a fierce intensity that captured and trapped her.

For a moment Eve felt stunned, imprisoned by his gaze. He had already started to move toward

her and in that moment of blind panic and fear, all she knew was that she could not face him. Not

now, not yet, perhaps never. Her feelings for him were still too raw even after five years. She had

But it was too late. Her shaking fingers slipped on the handle of the basket and it fell from her

grasp, spilling the ham and cheese across the cobbles and sending the milk cascading into the

gutter. An enterprising crow swooped down and snatched the ham away. Eve made a grab for the

basket, her hands trembling as she tried to gather everything together again.

Suddenly Rowarth was beside her, his hand on her elbow as he helped her to her feet, his touch

searing her through the material of her sleeve. He picked up the slightly squashed cheese and

handed it politely to her. Their fingers touched. Eve felt heat ripple through her awakening

feelings she had thought long dead. Rowarth was summoning the dairyman and the butcher with

the clink of coin and the men’s mumbled thanks. She felt hot and dizzy, the sun beating down on

her bonnet and dazzling her eyes. She tried to steady her breathing. There was not the remotest

chance of escaping a confrontation with Rowarth now. He still held her, lightly but with a touch

that made her entire body thrum with awareness.

She looked up and met his eyes and again felt the shock like a physical blow.

“Rowarth.” She was proud that her voice was so steady. “What an unexpected…surprise.”

His lips curved into a smile that was sinfully wicked but not remotely reassuring. “Is there any

other sort?” he murmured.

“There are nice surprises,” Eve said.

“And then there is meeting me again.” His smile deepened. “Which I imagine falls into a

different category given the alacrity with which you ran away from me.”

Pain twisted in Eve, bitter and sharp, not even slightly blunted with the passing of time. Yes, she

had run from him. She had had no other choice in the world. And now, five years later, the mere

sight of him could still affect her so profoundly that she felt faint and light-headed, her emotions

stretched as taut as a wire.

But Rowarth’s measured tones had nothing but coldness in them for her now. Whatever feelings

she still had for him, so deeply held that she had never quite been able to banish them, were not

shared. Mistresses came and went, after all. He had been everything to her and there had never

been anyone else for her since, but she could hardly expect it to be the same for him.

The crowds had melted away, leaving them alone. People were still staring, though from a

discreet distance. Women were staring. But then, Eve thought, women had always stared at

Alasdair Rowarth. Women had always wanted him. He was handsome, he was rich and he was a

duke. What more could one ask for?

“You must let me escort you home,” Rowarth said. He was steering her across the market square

and down Fortune Alley, one of the twisty little lanes that led away from the main thoroughfare.

Already they had left the bustle of the main streets far behind.

“There is absolutely no need, I thank you,” Eve said. “I am sure that you have more pressing

business.” It was impossible, she thought, that Rowarth had come to Fortune’s Folly to seek her

out. A part of her longed for it to be true; when she had first seen him she had hoped for one

heart-soaring moment that he had come looking for her because he still cared for her. Yet even in

that moment she had known deep down that it was a foolish thought. The cynic in her, little Eve

Nightingale, who had grown up on the streets of London and struggled to survive, knew enough

of life to see that as the fairy tale it was. Besides, if by some miracle Rowarth
had
sought her out,

that could only bring more lies and more heartbreak. There was no going back.

No, this could be no more than a coincidence. Fate was laughing at her, bringing Rowarth to this

little town, miles from anywhere, where she had thought herself safe. In a moment he would

“There was a time when you found my company a great deal more attractive.” Rowarth was

making no secret of his amusement at her blatant attempt to dismiss him. “Though of course,”

his tone chilled, “your affections lasted only as long as it took you to find someone you

preferred.” He looked around at the dingy back streets with their rubbish in the gutters and the

smell of rotting vegetables in the air. “What happened, Eve?” he said softly. “I hardly expected

to find you here. Did your new lover leave you without a feather to fly?”

“That is none of your business, Rowarth.” Eve tried to speak lightly, dismissively, but the words

stuck in her throat. In the note she had left him she had told him she had found another protector.

not follow her and demand the truth. It had been the only way to set him free.

Rowarth squared his shoulders. “You mistake.” His voice, smooth and deep, cut across her

thoughts. “It is my business. In fact I have no business here other than to see you, Eve.”

For a moment Eve’s foolish heart soared again at the thought he might, against the odds, care for

her still. But there was something in his voice that warned her; in his tone and in the cool,

appraising look that he gave her. And frighteningly he had read her thoughts and seen how

vulnerable she was to him, for he smiled again with grim pleasure.

“Have no fear that I am about to importune you with impassioned declarations of love,” he said

drily. “Nothing was further from my thoughts. This is business only.”

Eve felt a little sick at the contempt she could hear in his voice. “What possible business could

you have with me after all this time?” she questioned, still striving to keep her voice light. “We

have no more to say to one another.”

“We’ll talk of that in private.”

“No, we shall not.” Suddenly furious, she freed herself from his grip and spun around to face

him. “We shall not do that just because you dictate it, Rowarth. You always were arrogant.”

deferred to him because of his position. Eve remembered with a pang what it had been like when

she had been his mistress, beside Rowarth on those occasions when they had visited the opera or

the theater or a ball. There was a dizzy glamour that had been attached to his title and his status,

a glittering, raffish fascination that had beguiled her. When they had lain together, tangled in her

sheets in the rapturous aftermath of making love, she had teased him about his importance and

his arrogance and the way that people fell over themselves to please him, and he had laughed and

kissed her and they had made love again through the hot summer nights. She had loved the fact

that behind the closed doors of her boudoir Rowarth was hers, and hers alone, that she was the