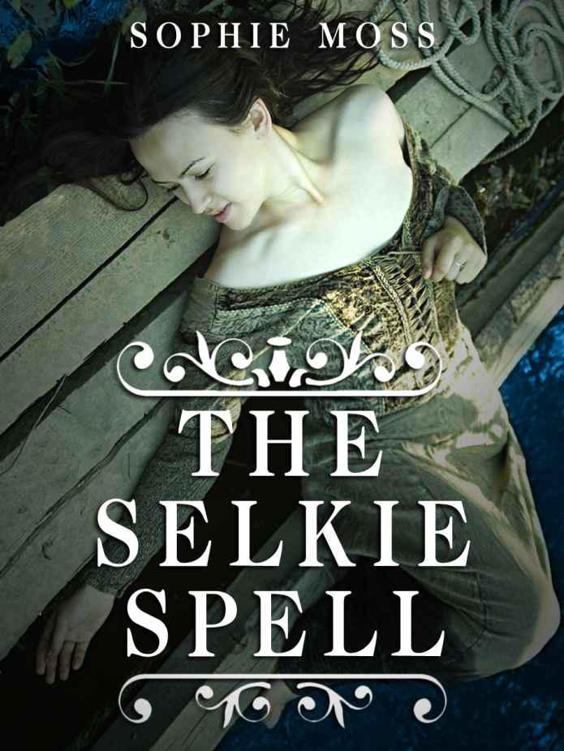 Thank you to my mom and dad, for everything.  The world would be a better place if everyone had parents like you.  Thank you to my earliest readers: Danielle Mulcahy-for the hours of brainstorming, pitch practicing, chapter swapping, and friendship.  Jennifer Edgell-what would I do without our walks?  And Stephanie Komich-for your love of reading and unwavering optimism that I would, one day, be published.

Ian Quigley crept toward the woman on the beach. He’d seen her from the cliffs, bathed in the moonlight of Midsummer’s Eve, shedding her seal-skin and tucking it under a rock. He’d heard tales of the creatures, selkies—seals who could take the shape of a woman on land—but he’d never seen one. He’d heard accounts of their beauty, of their ability to bewitch grown men, but he’d never felt their spell.

Ian’s heart beat faster as he made his way closer, for he knew that the most sensible fisherman at a mere sighting, would abandon his curragh in the roughest of seas to get a better look. The most faithful of men would desert their wives to follow a selkie into the sea, gulping the salty waves into their lungs, forgetting they could not breathe underwater as they reached for the woman’s long black hair with the tips of their fingers in their last sane breath. Others would lose their ability to speak or to eat, their need for the woman driving them mad as they wandered the beaches, waiting for her to return, their fingers rubbed raw as they dug in the sand, searching, always searching for her pelt.

For the man who captures the pelt of a selkie claims mastery over her.

Ian lowered himself from the cliff path, onto the sand. He crept toward the rock, where her seal-skin lay hidden. But at the sound of her low, throaty voice, he froze. The first notes of the siren’s song twisted into the night.

Ian fisted his hands to his ears. He squeezed his eyes shut and tried to fight it, but her voice threaded into his mind and he turned, gazing at the glorious face tilted up to the star-studded sky.

The hair that rained down her back was the color of crow feathers. Her skin, as pale as the sand at her feet, seemed to glow. The pelt lay forgotten as Ian started on shaky legs toward the selkie.

Toward the voice of the woman of the sea.

He tried to fight the force that pulled him to her, the hands that seemed to push him from behind. But the song seduced his soul, intoxicated his mind, and the words in his head only moments ago
—follow her, capture her, claim her—
vanished and there was only that woman.

He was almost to her. A few more steps and he’d be able to reach her, to touch her. To claim her for his own.
His selkie. His seal woman. His own.
Ian’s hands shook. He reached for her.

A gull cawed, swooped low over the ocean, and the selkie stopped singing. Released from the trance, Ian stumbled backwards and fought off the ropes that were trapping him, tugging him to her as his feet dug into the sand.

He scrambled for the rock, tearing at the tangles of seaweed, fumbling for the seal-skin. And when his fingers found it, his palms wrapping around the oily pelt as he pulled it to his chest, he sank to his knees, gulping for air.

In the village, dogs began to howl. In their beds, women woke, gasping, clutching at their throats, unable to breathe. Children dreamed of drowning, calling out for their mothers in their sleep. And on the beach, in the moonlight, the selkie turned and saw what Ian held.

An anguished cry cut through the night.

Ian lifted his eyes to the woman’s and a slow smile spread across his lips.
Mine,
he thought, as he pulled himself to his feet.
You are mine. You belong to me.
He held out his hand.  “Come to me.”

She came to him. But her dark eyes were void of passion, void of life as she stared at the bundle crushed to his chest. Her pelt, her freedom, her link to the sea; he had stolen it. He had shackled her to him.

And with every breath, every step closer to the man, she hated him.

When he reached out, threading his fingers into her hair, she closed her eyes and listened for the ocean. For the heart, for the beat of the only world she had ever known.

But there was only silence.

Tara Moore crossed the thin wooden plank leading to the ferry.  She spied the nets in the back, the wide wooden coolers and yellow rain slickers draped over the crates.

The captain eyed her curiously. “What do you think you’re going to find on Seal Island this time of year?”

“You’ll get plenty of that,” the captain assured her, locking the gate behind her.  “But are you sure you’re not wanting to go to Inishmore, or one of the larger islands?  Not many tourists on the island in April.”

“I try to stay away from the touristy places.”

“A single woman, traveling alone?” He took in her thin frame and threadbare sweater, the raven locks framing a pretty face with wide-set green eyes.  “Isn’t it safer to keep on the well-trodden paths?”

Tara glanced down at her ring finger, the faint imprint of her wedding band slowly fading.  “I’m not afraid.”

“Suit yourself.”  The captain shrugged and turned the key.

The engine gasped and sputtered to life.  She smelled gasoline. Saw smoke. The dark waters churned as the ferry pulled away from the dock, cutting a slow path toward the island.

“Ever been to Ireland before?” the captain called out from behind the wheel.

“What do you think so far?”

“That it is.”  He chuckled, steering out into the fog.  “But it wouldn’t be so green if it weren’t so wet.”  They rode in silence, until the mainland behind them disappeared and the only sound was the hum of the motor and the sea lapping against the hull of the ferry.  “Course some would say it’s because we’re all descended from the selkies and we need the wet air to breathe.”

“Aye.”  The captain nodded toward a shadow shifting beneath the dark waters.

Tara watched a shiny creature pop its head up and swim alongside the boat.  She spotted another one, moving underneath the surface.  Sleek and black it moved like a fish under the water.

Walking to the front of the boat, Tara rested her hands on the railing.  The wind whipped her dark hair into her eyes as she gazed down at the animals swimming beside them.

“You’ve heard of the legend, I imagine?” the captain called.

“Ah, it’s a tale for the tourists.”  The captain’s pale blue eyes twinkled.  “But you’re not looking for that, are you?”

Tara eyes scanned the water, widening when more seals slid up to the surface, slicing through the ocean beside the ferry.  “That depends.”

The captain settled back, his leathery hand resting on the top of the wheel.  “Now, that I can’t tell you.”

Tara’s eyes met his across the deck.  “How can you not know the ending?  All legends have endings.”

“Not this one.”  The captain nodded toward the bow of the boat.

She turned, sucking in a breath as the island erupted out of the water in a slash of slick limestone and weathered quartz.  Fingers of fog dripped from the soaring cliffs.  Seagulls dove in and out of the jagged crevasses, their solemn cries echoing over the harbor.

“Are those…?” Tara squinted through the mists at a sliver of sand covered in seals.  “Selkies?”

“I’ve never seen so many of them,” Tara exclaimed.  “Is it normal... for them to gather like that?”

“Tis.”  The captain replied.  “When they’re waiting for something.”

“What are they waiting for?”

The captain steered the ferry into the harbor, his cracked lips curving into a grin.  “Maybe they’re waiting for you.”

So she had come.

Thick mists swirled around the selkie’s ankles, snatched at the tips of her raven locks as she watched the ferry dock, watched the woman step down to the tall pier and head toward the path leading up to the village.

A faint ray of light burned in her soul, chipping away at the hopelessness, the despair, the longing she’d buried deep inside.  But with the hope, came the memories. And she saw her captor’s face as if it were yesterday. She heard his laughter as he dragged her back to his home.

She squeezed her eyes shut as she remembered the first slap of his fist, the groping fingers trapping her wrists as she struggled, her desperate cry for help as he threw her onto the hard, dirty floor and pushed himself inside her.

But no one came.

And as she lay on the floor of the cottage, beaten and broken, he hid her pelt. He took her freedom and, as the years slid by, her sanity.

In her madness she believed the sea would recognize her. That, in her desperation it would accept her and take her home. But without her pelt, without the seal-skin protecting her from the cold, icy waters, she choked on the very substance that had once been her air.

In taking her life, she cursed her already-broken spirit. She trapped her soul on this island, fated to wander the cliffs, reliving her torture, her sorrow.

Seawater dripped from the selkie’s fingertips, from the hem of her dress.  The shells threaded into her hair clinked in the wind.  She opened her eyes, dark as the splinters of a curragh lying at the bottom of the ocean, and turned them on the woman making her way up the path below.

One daughter. Only one daughter, she had managed to save. On the day she’d sewn rocks into the hem of her dress and walked into the sea, she had given that one infant child to the seals to protect. She pushed the crib out to sea, and watched as the seals surrounded it, nudging the child toward the mainland.

She knew in her heart that the child made it, that the others who’d come after her survived. But would this one, so many years later, be willing to accept the part she must play?

Would she be willing to stand for the women who’d come before her? Or would she run, turning her back on her fate?

Tara felt the force, like a jolt of energy, course through her and she lifted her gaze to the tallest cliff.  Through the fog, she glimpsed the outline of a woman with long black hair, her dress whipping in the wind, but when the mist shifted, she was gone.  In her place was only a small house, perched on the edge of a craggy hillside.

Shaking off the strange image, she shouldered her pack, climbing the curved road leading up to the sprinkling of whitewashed cottages.  The mists slid in patches, like schools of silvery fish around her ankles.  She could smell the sea, taste the salt in the air.

A legend that didn’t have an ending?  People who were descended from seals?
She might have believed in fairy tales once, long ago.

RAVEN'S HOLLOW by JENNA RYAN,
Fragmented Love by Pet TorreS
Temptation (Club Destiny) by Edwards, Nicole
Her Beguiling Butler by Cerise Deland
Taming the Legend by Kat Latham
Apocalypticon by Clayton Smith
Everybody's Brother by CeeLo Green
Anything Considered by Peter Mayle
Me Before You by Moyes, Jojo
Manifesto for the Dead by Domenic Stansberry