Read The Shadow of Mudflap (A Foxtrot Team Novel #1) Online

The Shadow of Mudflap (A Foxtrot Team Novel #1) 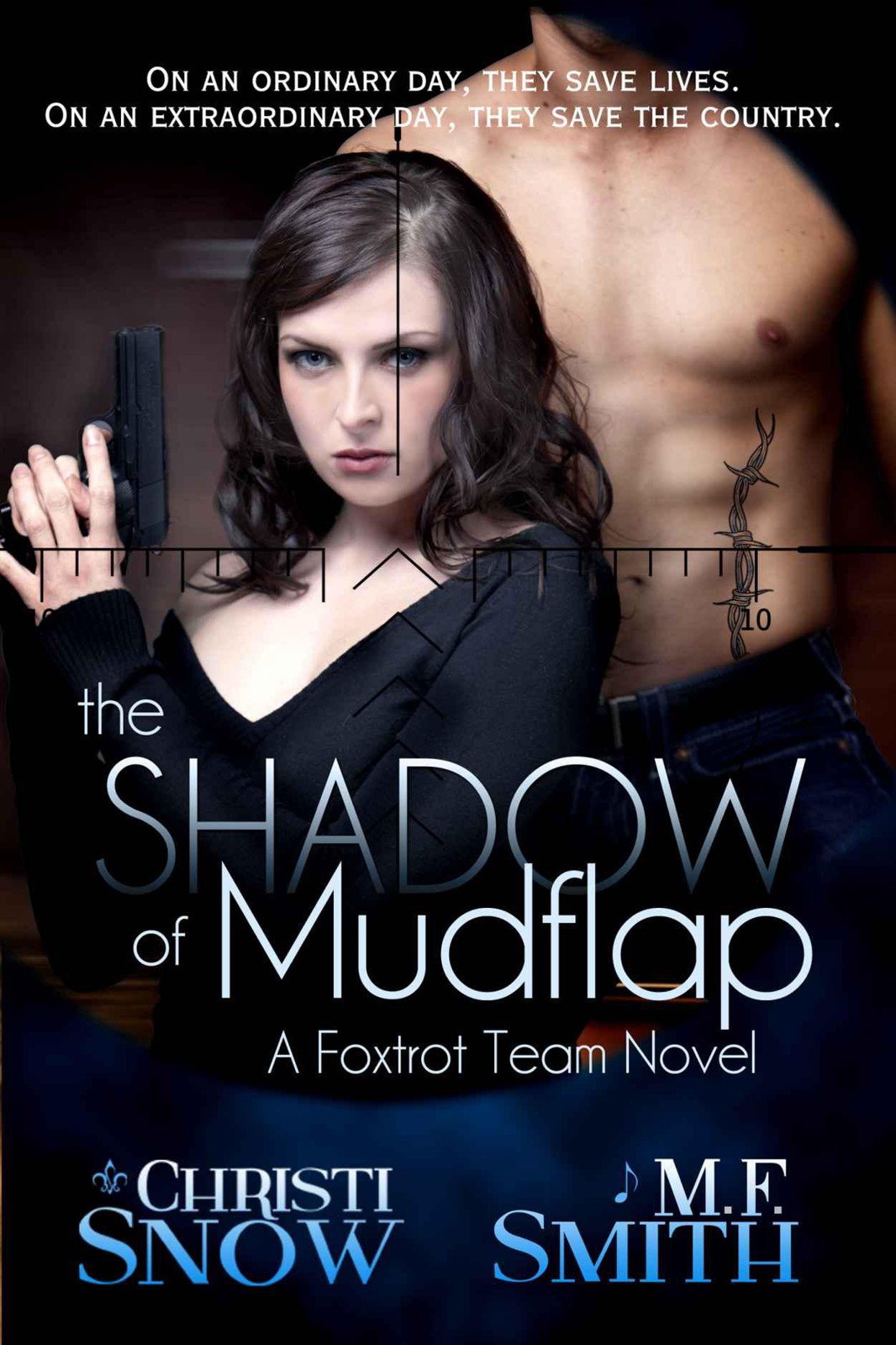 The Shadow of Mudflap

Cover Design by AM Design Studios

E-book Formatting by AM Design Studios

No part of this e-book may be reproduced in any form other than that in which it was purchased and without the written permission of the authors.

This book is licensed for your personal enjoyment only. This e-book may not be re-sold or given away to another person.

This book is a work of fiction. Any names, characters, events and incidences come from the author’s imagination and are not meant to portray real persons or events.

This book is for the first responders.

Every day they put their lives on the line so that others may live.

They are the real heroes.

Thanks to Christi Snow for an incredible journey and for allowing me the opportunity to co-write. You have made this dream a reality and are an incredibly talented writer and friend.

Thanks to Wilks Radio for a career that allows me to be creative and “live outside the box”.

To the KLLL Morning Show crew, my boss Jeff Scott & coworker Kelli D’Angelo, for their patience in dealing with me every day.

To my General Manager, Jay Richardson, the rest of our amazing team, and listeners and communities who make the job fun and worthwhile.

And last but not least my amazing wife who I can’t breathe and live without.

To M.F. Smith… I had no idea what was in store for me when we started this project, but it far exceeded my expectations. You always kept it fun with your incredible enthusiasm and creativity. Thank you for asking me to join you on this adventure!

From both of us:

And a HUGE THANK YOU to everyone who has helped us promote and spread the word about this very special project!

Week 1:
Focus that Adrenaline to Score

Week 2:
You Have to Fight for Every Inch

Week 3:
Take One for the Team

Week 4:
Sometimes a Substitution is Needed

Week 5:
Making the Best of a Fumble

Week 6:
Tying Up the Quarterback’s Time in the Pocket

Week 9:
When the Game Plan Goes to Hell

Week 10
(first half):
It Takes the Whole Team

Post-Season:
Headed to the Championship Game

Week 1: Focus that Adrenaline to Score

Mudflap Davidson gazed at the wall of fire in front of him, focusing the spray of water toward the base of the curls of orange, yellow, and blue. As the flames continued to grow and lick across the roof, he realized the fire department wasn’t making any headway against this inferno. The call had come in too late and cotton residue throughout the old mill continued to fuel the voracious fire. Abandoned cotton gins like this were a disaster waiting to happen.

He and his partner, Grant Simpson, were working the exterior of the “B” wall when the information came through their headsets. Someone reported a homeless family including two children lived within the office of the structure, an office which was on their side of the building. All it took was a glance at his partner and they were on the same wavelength. They scrambled to the door, powering through the rotten wooden doorframe.

Inside, a maelstrom of heat and smoke blasted at them. The glow from the fire flickered across the high ceiling and signaled the urgency to move quickly. A bad feeling rolled over Mudflap’s shoulders. He momentarily met Grant’s grim and focused eyes. This huge structure wasn’t going to last much longer. They needed to hurry. Mudflap continued to man the hose as they worked as a team to clear the way and find those kids.

Scanning the thermal imaging camera around the room, Grant flashed two fingers at him and signaled toward the vague outline of another door. Mudflap nodded and followed the light of the reflective tape on Grant’s gear, spraying hot spots along the way. The metal of the building creaked and groaned with the power of the fire devouring it.

The smoke was thicker the farther into the building they battled. Instinct alone, honed by working hundreds of fires, led them closer to the office.

“I’ve got them!” Grant yelled as he reached forward to the bulky shapes on the ground. Mudflap could barely discern the children through the fog of smoke.

He dropped the hose and grabbed at the small body Grant thrust toward him.

“Get out! I’ve got the other one and am right behind you,” Grant called out.

Mudflap took off running, the small child completely still in his arms. He cradled the small body trying to protect the child from the fire and embers as he stumbled the few steps through the door and into the fresh air and daylight outside. Luckily another firefighter stood there and he passed the child off to him before turning back to help Grant.

The other child had been struggling and screaming in Grant’s arms, loud enough to be heard over the roar of the fire. He had to hurry and help.

Mudflap reentered the building and it seemed like forever before he found them again, but when he did, Grant shoved the child into his hands. They were running low on air in their packs, the structure was about to come down around them, and Mudflap was closest to the door.

Just as he cleared the door with the child in his arms, a gust of hot air blast over him as the building gave a final soul-shredding bellow and collapsed, trapping Grant inside. Mudflap thrust the child into the outstretched arms of a waiting paramedic before turning back to the carnage.

Time completely stopped as firefighters swarmed the area. One of their own was trapped in the debris. To Mudflap, the surge of bodies felt like being stuck in the mud. He needed to get to his partner.

Adrenaline surged through him as he tore through the smoldering ruins, knowing every single second counted toward Grant’s survival. Finally they uncovered him and pulled him clear of the building. Grant was only pinned down for a total of five minutes, but it had felt like five hours.

A paramedic team barreled in, shoving the firefighters out of their way so they could work on Grant.

Mudflap stood by helplessly, watching the medical team prep Grant. When the call went out that there were children involved, they called in the helicopter for fast transport to the hospital. The kids appeared to be fine, although terrified and both suffering from mild cases of smoke inhalation.

But Grant needed the medevac. Even from a distance, Mudflap could see the blood, twisted bones, and contusions through the thick layer of grime blanketing Grant’s still body.

Two of the medical team worked on Grant, assessing his vitals and setting the IV. Frustration pounded at Mudflap. That was his partner injured, all because he left him behind.

The female paramedic, one he’d seen a few times, but never worked with before, bent down to listen to Grant, her chestnut ponytail swinging with her movement. She looked up and scanned the cluster of firefighters. “Who’s Mudflap?”

When he stepped forward, she waved him over. “He wants to tell you something, but make it quick. We need to go and get him into surgery.”

He leaned down to Grant. “What happened? I thought you were right behind me.”

“I saw something. My dad…” Grant’s voice was scratchy. He pressed a circle of gold into Mudflap’s hand.

Mudflap gave a quick nod, squeezed Grant’s shoulder, and looked down at the odd coin that he had given him. A cold thread of apprehension snaked down his spine, but he couldn’t focus on the mystery of Grant’s dad now. “I’ll be at the hospital when you get out of surgery.”

The female paramedic again brushed him aside, while glancing curiously at the coin. “I’m sorry. We have to go.”

The paramedic tried to put the oxygen mask on Grant, but he pushed it away with a weak wave of his arm. His bloodshot eyes sought out Mudflap again. “It wasn’t your fault.”

Mudflap swallowed against the lump in his throat and gave a quick nod and squeeze to Grant’s shoulder. They’d been partners for four years and Grant knew the way his mind worked, knew the guilt he carried over Kyle’s death in Afghanistan. He couldn’t keep his spotter alive then and now he’d let down another partner.

He refocused on the paramedic, momentarily losing himself in her golden brown eyes. An arc of electricity shot through him. She was stunning and the empathy etched in her face pulled at him. “What hospital are you taking him to?”

“Thanks. Keep him alive.”

She gave a quick nod and her lips pressed together in a tight line of determination. Everything about her body language said she didn’t think he was going to make it, but she would do everything she could to give him his best shot.

Mudflap pulled the door to Grant’s hospital room closed behind him as he entered the hallway. Four hours and, while the news wasn’t perfect, Grant was still alive. He’d made it through surgery to repair the internal bleeding. He still had broken bones that needed medical attention, but they wanted him more stabilized first.

Grant’s wife was with him now and Mudflap was on his way home. The call for the cotton gin fire had come at the end of a long twenty-four hour shift. He needed to decompress.

His body was exhausted although he still felt the remnants of adrenaline and frustration surging through his system. It would help if he could work off some excess energy. Right now a good, sweaty, distracting romp in bed sounded about right. But since there wasn’t anyone besides Derek, his roommate, waiting for him at home, that wasn’t very likely.

The image of the sexy paramedic momentarily flashed through his brain, but that just brought his thoughts back around to worrying about Grant.

As he walked down the long hospital corridor, he replayed those moments during the fire. What could he have done to prevent this from happening? Grant was his partner. It was his job to keep him safe and he shouldn’t have let him fall behind. It was just like what happened to Kyle when they were ambushed in Afghanistan.

He was so busy berating himself as he walked that he was surprised when the gorgeous paramedic from the medevac flight pulled him to a stop. His eyes were immediately drawn to her tight black t-shirt and fitted cargo pants. Simmering arousal thrummed through his system, a leftover from the adrenaline of the day.

She watched him with compassion lighting up her gorgeous whisky-colored eyes. “Hey, how’s your partner?”

Damn, even her voice was low and sexy. It did bad things to his already energized system as blood rushed to his building erection. He tried to concentrate on what she asked. “He made it through surgery, so it looks better. They said the next twenty-four hours are critical.”