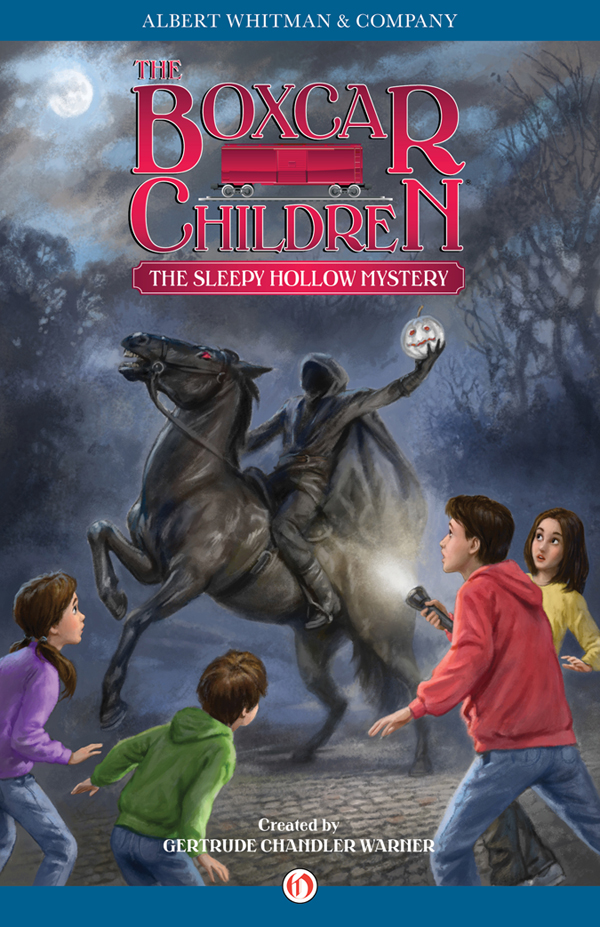 9. Mystery in the Woods

T
he Haunted Hollow Gift Shop, located on
the first floor of a big yellow house with white
shutters, was completely dark when Mrs.
McGregor parked the car in front of it.

“I thought Mrs. Vanderhoff was expecting
us,” Jessie Alden said, peering out the car
window.

“She is,” said Mrs. McGregor, the Aldens’
housekeeper. “I’m not surprised the shop is
dark, since it’s closed at night, but the lights
in the upstairs apartment should be on.”

Ten-year-old Violet Alden rolled down the
car window and leaned out. “I think there’s
someone standing on the porch. It looks like
a man in a cape, but he’s standing very still.”

Their dog, Watch, perched on Jessie’s lap,
began to growl.

The youngest Alden, Benny, asked, “Can I
see?” He stuck his head out and then jerked
back in, bumping against Violet. “Roll up the
window, quick! The man doesn’t have a head.
It’s there on the ground!”

His older brother, Henry, took a flashlight
out of the glove compartment. “It’s probably
some sort of Halloween decoration.” He
shone the light on the front of the shop.
“It’s a scarecrow. He’s headless, all right,
but the thing on the ground is just a carved
pumpkin.”

Benny moved closer to Jessie. “The town
of Sleepy Hollow is already turning out to be
spooky.”

“There
is
something strange about that
pumpkin head,” Violet said. “It’s all white.”

“Is it a ghost pumpkin?” Benny asked.

“I’ve seen white pumpkins at farm stands,”
Jessie told him. “Some people like them
because they’re unusual.”

“I think I like the orange ones better,”
Benny declared. “No ghost pumpkins for me.”

“Are we sure this the right day?” Violet
asked. “Maybe Mrs. Vanderhoff thought we
were coming a different day.”

“No, I just talked to Gretchen on
Tuesday. I told her your fall break started
this Friday,” Mrs. McGregor said. The
Aldens’ grandfather was away on a business
trip, so Mrs. McGregor had brought them
to the Hudson River Valley to visit one
of her old friends, Mrs. Vanderhoff. The
children were excited to see how the town
of Sleepy Hollow celebrated Halloween,
and they were looking forward to going
on one of the new ghost tours run by Mrs.
Vanderhoff’s daughter.

Henry Alden snapped on Watch’s leash and
got out of the car with the dog. “Why don’t
we ring the doorbell?”

The rest of them followed.

“The apartment door is on the side of the
building,” Mrs. Vanderhoff said.

Before they could ring the bell, a figure
carrying a lantern came out of the shadows
between the buildings. Violet, who was in
front, let out a little squeak of surprise and
took a step back.

“Don’t be frightened,” a woman’s voice
called. As she came forward, the lantern light
showed a woman about Mrs. McGregor’s age.

“Gretchen!” Mrs. McGregor exclaimed.
“We were worried when we didn’t see any
lights. Children, this is my dear friend
Mrs. Vanderhoff.”

Mrs. Vanderhoff said, “I’m delighted to
meet you. Now let me guess who is who. I’ve
heard so much about you.”

“Hmmm…well, I know Henry is fourteen
years old. Are you Henry?” She smiled when
she said this to Benny and the older children
knew she was teasing.

“Then you must be Benny, and the taller
boy must be Henry.”

“You’re right!” Benny said. “Can you guess
the girls?”

Mrs. Vanderhoff smiled again. “The girls
are easier to guess because I’ve heard Violet
likes purple and I see one of you has on a
purple sweater.”

“I also know you’re an artist,” Mrs.
Vanderhoff continued. “I hope you brought
your paints! The Hudson River Valley is a
famous spot for painting.”

“I did bring them,” Violet said. “I would
like to try to paint some of the trees with
their fall colors.”

Mrs. Vanderhoff turned to Violet’s sister.
“So you must be Jessie,” she said, shaking
Jessie’s hand. “And I’d recognize Watch
anywhere.” She patted the dog, and the terrier
wagged his tail. “I’m sorry it’s so dark, but the
power is out,” she explained.

“The dark made your porch look scary,”
Benny said.

“We thought the scarecrow was a headless
man,” Violet added.

Mrs. Vanderhoff looked puzzled. “The
scarecrow isn’t supposed to be scary. My
daughter Annika carved a happy face on the
pumpkin head.” 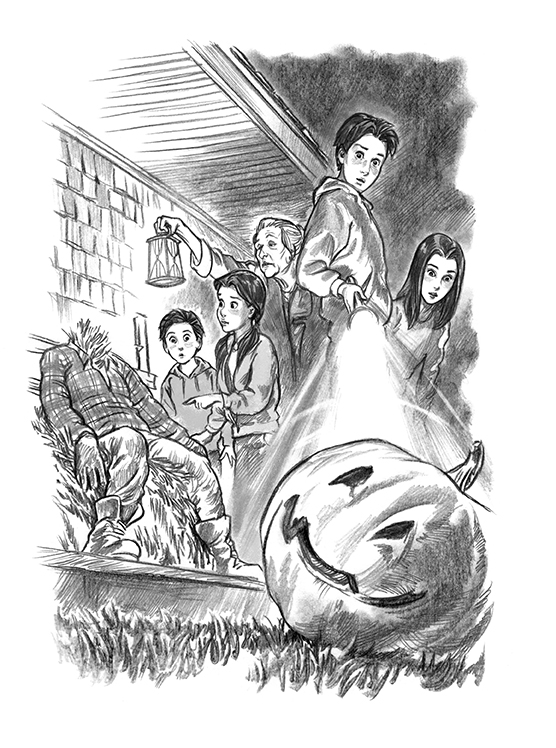 “The pumpkin head is on the ground,”
Jessie said. Henry shone the flashlight so
Mrs. Vanderhoff could see it.

“Oh, that’s too bad. The pumpkin must
have fallen off the scarecrow frame. Annika
wouldn’t make a headless scarecrow. She
doesn’t like scary Halloween decorations.
We’ll fix the scarecrow tomorrow. Now, if
you want to bring your suitcases around back,
I do have a nice fire going in the fire pit. I also
have some hot cider for everyone. My other
daughter Margot made some crullers today
too. I think you will like those.”

“I don’t know what crullers are, but they
sound good!” Benny said. “I’m hungry.”

Mrs. Vanderhoff laughed. “Crullers are a
special kind of doughnut dipped in sugar. The
recipe has been in my family for generations,
ever since the first Dutch settlers came to
this area of New York.”

“We can’t wait to try them,” Jessie said
as she helped Henry get the suitcases out of
the car.

Henry paused to look around. “The power
isn’t out anywhere else,” he said. “That
restaurant next door has all its lights on.”

Mrs. Vanderhoff sighed. “The restaurant
is the reason we don’t have electricity. They
are doing some repair work. Somehow
the power to my property was cut off. It’s
supposed to be fixed in the morning, but
until then, we’ll have to rely on flashlights
and candles.”

A paved path led to a fenced-in backyard.
Torches in the ground lit a stone patio with
a fire pit in the center. The fire in it blazed
away. Jessie thought it looked very cozy, like
a little island of light in the dark yard.

“Take a seat,” Mrs. Vanderhoff said,
motioning to the benches placed around the
fire. They all sat down except Watch, who
stood next to Henry. The dog sniffed the air
and then whined.

“Settle down, Watch,” Henry said. He
patted the dog, who sat down but continued
to look around, his ears alert.

“I think we all would,” Mrs. McGregor
added.

Mrs. Vanderhoff went over to a small table
that held a thermos, mugs, a large platter
covered with foil, and a cookie jar. As she
poured, she explained, “Annika will be back
with her ghost-tour guests very soon. They
walk most of the way, but then a friend of
hers picks them up in an old wagon and
brings them back here. When they arrive,
everyone sits around the fire for snacks and
one last story.”

“How is the ghost-tour business going?”
Mrs. McGregor asked.

Mrs. Vanderhoff handed a mug of cider
to Benny. “Annika is just starting out so it’s
been a little slow. Her tours are unusual. She’s
calling them family-friendly ghost walks. So
many young children think some parts of
Halloween are too scary. She tells interesting
stories and shows them some beautiful places
in the woods.”

“That’s a good idea,” Violet said.
“Sometimes I’m scared of the dark. My
friends like Halloween haunted houses, but
I don’t.”

“Annika is hoping some of the people who
take the tours will tell their friends,” Mrs.
Vanderhoff said. “Every little bit of money
helps. My poor old house needs so many
repairs. We fix one thing just when something
else breaks.”

“If you have some tools I can use,” Henry
said, “I’ll be happy to fix what I can. I like to
fix things.”

“Thank you, Henry. I have several small
jobs you could do. At least the apartment over
the garage where you’ll be staying is in good
shape, except it doesn’t have any power at the
moment. If you are too frightened to stay out
there, we can all stay inside the main house.”

“We’ll be fine,” Jessie said. “We’re used
to staying in places without electricity. Our
boxcar in the woods didn’t have any power.”

After their parents died, the Alden
children had run away. They had never
met their grandfather, but they were afraid
of him because they’d heard he was mean.
The children had found an abandoned
boxcar in the woods and made it their home.
When their grandfather found them, they
realized he wasn’t mean at all. He brought
them to his home to live with him and Mrs.
MacGregor. He even had the boxcar moved
to his backyard.

Mrs. Vanderhoff’s cell phone rang. She
answered and a serious look appeared on
her face. “Oh dear. Margot isn’t home, but
I’ll be there right away.” Putting the phone
away, she said, “That was Annika. Her friend
Isiah didn’t show up with the wagon and she
can’t reach him. I need to go pick up the tour
group and bring them back here.”

“Will everyone fit in your car?” Mrs.
McGregor asked. “I can take my car too.”

“Thank you. I was going to have to take
two trips,” Mrs. Vanderhoff said. “You
children will be fine here by yourselves for a
little while, won’t you?”

“I guess so. You’ll be back soon, right?”
Benny asked. “It is very dark even with
the fire.”

Jessie put her arm around him. “We’ll be
fine,” she assured him. But she looked around
at the trees with their twisted branches
looming over the yard and hoped they
wouldn’t have to stay alone for
too
long.

“Have a cruller or a cookie while you’re
waiting.” Mrs. Vanderhoff motioned to the
covered platter and the cookie jar. “There
are plenty.”

After Mrs. Vanderhoff and Mrs. McGregor
left, Jessie finished pouring the cider for
everyone and asked, “Which do you want,
cookies or crullers?” She tried to sound
cheerful so the others wouldn’t realize she
was already getting a little spooked about
being in such a dark, strange place.

“I think we should try something new, so I
vote for the crullers,” Henry said.

Jessie passed them out. “I like the shape of
these. They look like someone braided pieces
of dough.”

“These are yummy,” Violet said, biting
into hers. “They’re so much crunchier that
regular doughnuts.”

“I like the sugar that’s all over them!”
Benny said.

“Maybe I can get the recipe from Mrs.
Vanderhoff,” Jessie said. “I can try to make
them.”

The wind picked up and the branches of
the trees rustled. Most of them had already
lost their leaves, but a few fell from a big oak
tree and blew onto the patio. Watch leaped
up and tried to catch some.

“I’m glad we have a fire.” Jessie shivered,
buttoning the top button of her coat. “It’s
chilly.” The moving branches of the trees
threw shadows on the ground, and they
looked like broken skeletons dancing in the
circle of light from the fire.

Just then Violet jumped, spilling some of
her drink on the ground.

Henry was so startled, he almost dropped
his drink too. “Violet! What’s wrong?”

“Did you hear that noise?”