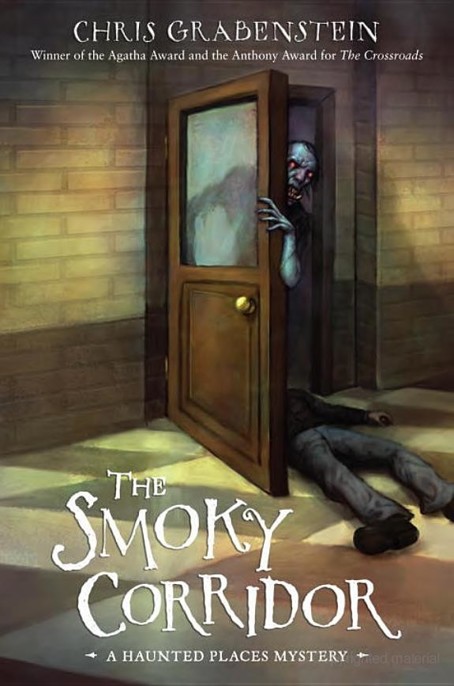 The Crossroads
winner of the Agatha Award and the Anthony Award

The night
before he officially started at his new school, Zack Jennings already had a feeling the place was haunted.

He was standing in the main hall of Horace P. Pettimore Middle School, staring at an oil painting that was staring back at him.

He stepped to his right.

The portrait’s eyes followed him.

The hooded eyes followed him.

Zack hopped from foot to foot, from side to side, and the man in the portrait, some sort of Civil War soldier, kept a scornful eye on his every move.

Zack’s dad came up behind him. Put a hand on Zack’s shoulder. Zack stopped bouncing.

“You looked jumpy. I was over there talking to Principal Smith, saw you wiggling. I figured you were either anxious about tomorrow or you were busting out some new dance moves.”

Tomorrow
. The start of a new school year. His first in North Chester, Connecticut—the small town where his father had grown up.

“I was just, you know, looking at the painting,” Zack explained, gesturing at the ornately framed portrait of the Yankee soldier, whose blue uniform had a column of shiny brass buttons running up the front all the way to his bearded chin—not to mention gold ropes on both shoulders. The scowling face had, of course, stopped swinging its eyeballs back and forth the instant Zack’s dad looked up at it.

“Ah! That’s Captain Horace P. Pettimore. This main hall used to be the grand foyer of his mansion.”

“He was a steamboat captain who moved here after the Civil War. Became a very wealthy, very generous gentleman farmer.”

“First,” Zack’s dad, the history buff, went on, “Mr. Pettimore donated the property out back, several acres along the river, for the cemetery. Then, when he died, he bequeathed his mansion and all his lands surrounding it to the town, only asking that it be used for a school and that he be buried in the cemetery so he could keep an eye on the place.”

Zack figured that was why they called it Horace P. Pettimore Middle School.

And why the place was haunted.

Hey, you can’t build a school this close to a creepy old cemetery and not expect ghosts.

Plus, according to what Zack’s dad had told him on the car ride over, the school had been the site of a “terrible tragedy” back in 1910.

“It happened in a windowless corridor in an old part of the school, the narrow hallway leading to the wood shop. A horrible fire killed Joseph and Seth Donnelly, the two boys who started it by playing with matches, and the brave teacher who tried to rescue them.”

A graveyard, a terrible tragedy, two brothers and a heroic teacher killed in a corridor they couldn’t escape?

This school was definitely, one hundred percent haunted.

Zack knew a thing or two about haunted places, because he had a special gift: He could see all sorts of dearly departed souls (even the ones who popped into paintings) whom other people, especially adults like his dad, could not. He always figured it was the kind of gift that should’ve come with a gift receipt so he could take it back for something better, like athletic ability or superpowers.

“You ready to head on back?” Zack’s dad asked. “I need to make a little speech, present the check.”

“This way. The auditorium’s in one of the modern wings, built in the seventies. The
nineteen
seventies.”

They followed the flock of parents, teachers, and students
eager for the start of Pettimore’s annual Back to School Night. They’d hike about a half mile back to the auditorium, where there’d be a few speeches and a couple of awards, and then everybody would have a chance to visit classrooms, meet teachers, and buy souvenir Pettimore Yankees sweatshirts and stuff. There’d probably be cupcakes, too.

As they moved with the jostling crowd, Zack once again sensed he was being watched.

He glanced over his shoulder, back at the gloomy portrait of Horace P. Pettimore.

Yep. The old guy was staring at him again.

The two
men trudged through boot-sucking mud in the dark.

Eddie was following Mr. Timothy Johnson, who, according to Eddie’s boss, was the best dowser in the world. That was why Johnson was holding out a divining rod—a forked branch from a witch hazel tree.

“Find anything, sir?” Eddie asked as they made their way through the forests surrounding Pettimore Middle School.

Now the only sound came from the chorus of crickets and cicadas chirping in the nearby meadow.

Eddie did not want to throw the little man in the bowler hat off course. Johnson was a pro when it came to finding things with his Y-shaped stick. Hidden things, like freshwater, gold mines, oil geysers, and most importantly, buried treasure.

The clues the boss had already pieced together had brought them this far, to the woods surrounding what had once been the Horace P. Pettimore estate near the town of
North Chester, Connecticut. Now Eddie was counting on Mr. Johnson to tell him exactly where to head next.

“That which we seek is close at hand!”

Some unseen force yanked Mr. Johnson forward. He sailed through the brambles and branches, hanging on with all his might to the stiff twig twitching in his grip. Eddie followed.

They stumbled out of the forest into a clearing. No, it wasn’t just a clearing. As they walked through the darkness across the dewy meadow, Eddie realized they had entered a cemetery.

“This way!” said Johnson, leading him through the rows of tombstones. They marched down a gently sloping lawn to the muddy edge of a river.

“This is the Pattakonck!” Eddie exclaimed. “Why, old Horace Pettimore could have sailed his steamboat straight up here from the docks down in North Chester. This is where he buried his gold! He buried it with all the dead bodies!”

“No,” said Mr. Johnson, his stick now hanging limply in his hands. “The effluvia emanating from the water’s surface must have overwhelmed the witch hazel.”

“The moisture from the river temporarily threw my rod off course!”

“You’re joshing me, right?” he said as politely as circumstances allowed.

“No. We need to start over. Perhaps we ventured too far from the school. We’ll try again.…”

“Your services are no longer required.”

“What? Don’t be preposterous!”

“Excuse me.” Eddie reached into his coat pocket. Pulled out his cell phone.

“What … what are you doing?” the dowser demanded.

The stick quivered in Mr. Johnson’s trembling hands. “Wait. As I said …”

“Sorry for disturbing you,” Eddie said when the boss answered. “This Johnson fellow? He is absolutely worthless.”

That was when Eddie pulled out his pistol.

“No! Don’t!” Mr. Johnson pleaded. “Tell your employer that we will try again … tomorrow night.… I know I can find the hiding place.… I’m positive!”

Eddie cocked back the brass trigger.

“So, what would you like me to do, boss?” Eddie asked.

Eddie smiled. He liked what he heard:

“And now,”
said Principal Scot Smith, “it gives me great pleasure to introduce George Jennings, a graduate of this school and now a partner with the New York City law firm that’s been the trustee of the Pettimore estate for over a century. George?”

Zack applauded wildly like everybody else as his father made his way to the podium.

“Thank you, Principal Smith. As most of you know, Captain Horace P. Pettimore chose to retire here at the close of the Civil War because he craved the peace and tranquility of our unspoiled surroundings. He never married, never had children. So he used his vast fortune to build the Riverside War Memorial Cemetery, where veterans and paupers could be buried free of charge, and later, at his death, he left us the land and first buildings for this school.”

Zack wished his stepmom, Judy, could hear everybody clapping for his dad, but she was busy over in Chatham at the Hanging Hill Playhouse, where the musical she’d
written,
Curiosity Cat
, was ending its run and attracting a lot of what they called “buzz” from producers who wanted to move the show to Broadway.

“Of course,” Zack’s dad continued, “if you grew up in North Chester, like I did, you also heard stories about Captain Pettimore’s other fortune, his buried treasure—all the gold he supposedly stole from the Confederate Treasury.” He put a hand to the side of his mouth as if he had a big secret to share. “If anyone happens to dig up a mountain of gold while you’re on a nature hike out in the woods, please give me a call. That gold belongs to the Pettimore Charitable Trust!”