Read The Society of Thirteen Online

The Society of Thirteen 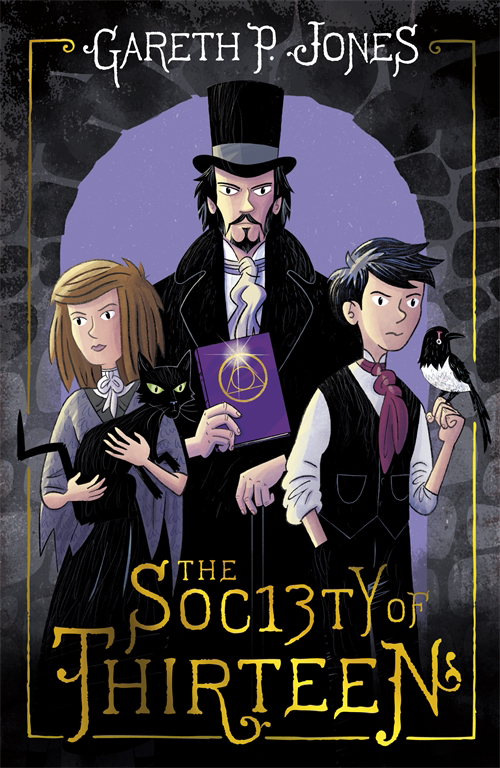 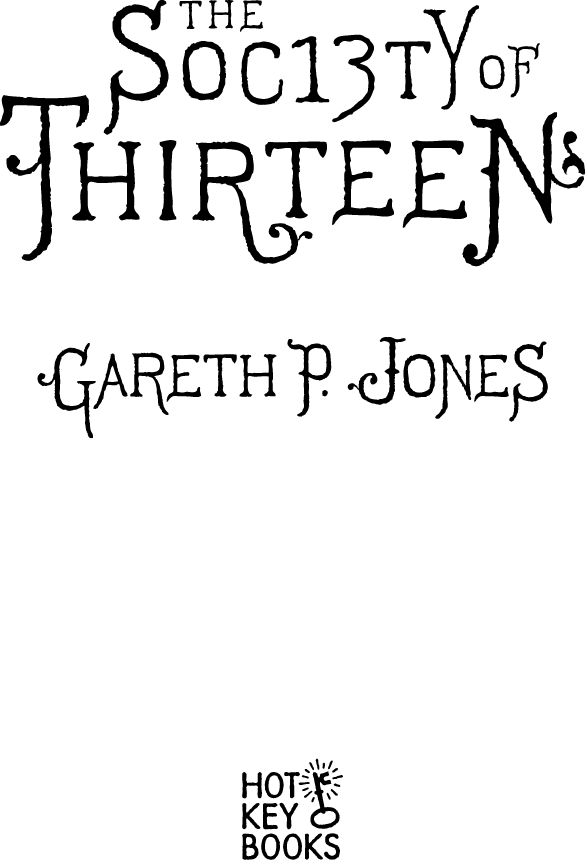 To my wonderful wife, Lisa,
who brings magic into my life

Amy clambers over the wall and drops into the cemetery. It's ridiculous that they lock the gates at night. Who would want to enter a cemetery after dark? Even Amy understands it isn't exactly normal. The lady who comes on Wednesdays doesn't like the word ânormal'. She says that everyone has their own idea of normality.

Amy has lived with her grandparents since the death of her mother, but they don't know about her visits to the cemetery. Tonight she snuck out unseen while they were watching television. They think it is she who is lost in an imaginary world, but her characters are more real than those miserable soap people. At least hers were alive.

The names on the gravestones now populate the story she is writing but they once had real lives. Amy has researched them as best she can. Sir Augustus Tyrrell was a politician. Mr G. Hayman was an American novelist, who wrote stories about magic, whereas Mr John Symmonds wrote dull-sounding books with long titles about language and grammar. Harry Clay was a famous illusionist and the only one of her characters who doesn't share their year of death: 1891.

The lady who comes on Wednesdays asks lots of questions about Amy's story, because she thinks it will reveal clues about what's wrong with her. Amy can tell she thinks she's weird, even if she wouldn't ever use that word. Most thirteen-year-old girls have friends. They don't have such difficulty talking to others. They don't feel as though sometimes the world is collapsing in on them. They aren't forced to see people like the lady who comes on Wednesdays. They don't spend their time making up long, complicated stories, filled with names plucked off gravestones.

Amy likes it here in her imagination and here in the cemetery. Other people would probably be scared somewhere so spooky so late at night. They would worry about ghosts or muggers or worse. Amy doesn't believe in ghosts. And what mugger would be stupid enough to hang around a place no one in their right mind would go? As for the worse, they are already present in Amy's imaginary world.

Under a weeping willow, Amy finds her favourite gravestone. The words have been worn away over the years, but they are still just about visible. Amy uses her torch to find the name of the character her story begins with:
Lord Silas Ringmore.

A breeze chills Amy's bones. She rubs her arms to warm herself. Something moves in the bushes. Amy tells herself not to be scared. She wouldn't be scared if she heard the same noise during the day, but the darkness does strange things to the imagination.

Something rustles again. Amy picks up a stick to defend herself with in case it does turn out to be a murderer or a mugger, or something worse.

The Magnificent Meze had them in the palm of his hand. For the last hour, this mysterious, dark-skinned gentleman, clad in a flowing robe and speaking with an exotic accent, had captivated the packed audience of the London theatre. They had watched wide-eyed as he summoned dark forces to lift a series of objects from a table on one side of the stage then transport them across to another. They had witnessed him slice his beautiful assistant in two then reconnect both halves, apparently causing no harm to the lady. The grand finale had involved a volunteer from the second row, who was made to vanish from inside a cabinet on the stage then reappear in one of the royal boxes. As the volunteer stepped out, looking utterly bewildered, the applause was as thunderous as the grand old theatre had ever heard. The Magnificent Meze raised his hands and threw back his head, soaking up the adulation.

âThank you for your generous applause. I hope you have been entertained this evening,' he said once the applause died away. âBut more importantly, I hope that I have shown you that the universe contains a great many aspects beyond your understanding. The study of spiritualism and mysticism has much to tell us about the world, but tonight I speak to you of the elements which I have harnessed for this performance. The unseen elements which surround us Â â¦Â ' He lowered his voice to a whisper. âI speak to you of magic.'

The silence that followed was pierced by a singular utterance from a voice in the stalls. âBalderdash.'

A look of puzzlement crossed the magician's face. âWho speaks this word?'

In contrast to the magician's colourful attire, the man who stood up was dressed entirely in black, from the tips of his expensive shoes to the top of his pristine top hat.

âLet us have the house lights, please,' spoke the Magnificent Meze. âI would like to see this naysayer.'

The lights came on to reveal the gentleman's face. He had angular cheekbones, a pointed nose and piercing eyes. His right hand rested lightly on the ornate golden handle of a black walking stick.

âYou will have to forgive me,' said the Magnificent Meze. âI have not long been in your country. I am not familiar with some of your words. Please explain this word,
balderdash
.'

âYou are accusing me of being a liar?'

âI consider this a great insult.'

âThen it seems you understand me perfectly.'

A titter spread through the audience as they realised they were to get yet more drama for no extra cost. This was better than an encore.

The Magnificent Meze looked less impressed by the interruption. âYou have not been entertained this evening?' he said.

âEntertained? Certainly,' said the man. âBut your suggestion that there is any more to this spectacular evening's entertainment than stage trickery is pure deceit. Retract this claim and I will not embarrass you by revealing your methods.'

âI will do nothing of the kind,' replied the Magnificent Meze. âI have already revealed my methods. Magic, which was once commonly used, has become the stuff of myths and stories, but I harness the very real threads of magic which hold together our world and weave them into the performances you have witnessed.'

âVery well.' The man stepped out into the aisle and walked briskly towards the stage, stick in hand, before leaping up into the limelight.

The Magnificent Meze looked decidedly put out by the man's appearance. âIn my country, such interruptions are not usual.'

âThen welcome to England,' replied the gentleman, âthe land of the cynic.'

âMy name is Lord Ringmore and I am here to tear through the fabric of your lies.' He looked up. âYes, as I thought, there is plenty of room up there for your stage hands to lift the objects with wires, unseen in the dim lighting required to conjure these mischievous spirits of yours.'

Lord Ringmore interrupted him. âYou employ as much magic as a fisherman uses to catch fish.'

The Magnificent Meze's obvious annoyance was only increased by the laughter from the audience. Lord Ringmore marched to the back of the stage and wheeled out the box, inside which the girl had been halved.

âLadies and gentlemen,' he said. âUp close, it is clear that this box is large enough to contain two women, each tucked up in their own compartments. While we saw the head of the pretty assistant, the lovely legs belonged to a second woman. A smoothly executed trick, I'll grant you, but nothing supernatural.'

âWho are you that would stand here and denounce the magic to which I have dedicated my life?' cried the Magnificent Meze.

âI am one who has dedicated his life to the search for real magic. I came here in search of it. Sadly, all I have seen are cheap tricks carried out with confident bombast and overblown theatrical flair. Do you really want me to continue with this dissection?'

âYour explanations are little more than conjecture,' replied the Magnificent Meze. âDid you not just witness me transport a man from this stage across the theatre? How do you explain that?'

Lord Ringmore tapped the stage with his stick. âThe man was hidden inside the cabinet. The trapdoor opened, allowing him to drop below the stage. Then, while you regaled the audience with your lengthy and entirely nonsensical dissection of the mechanics of magic, he hurriedly made his way to the box, which was conveniently empty. Surprising, since tonight's performance was sold out.'

âIn which case, would this man not be aware of his involvement?' The Magnificent Meze turned to the volunteer, now back in his seat. âSir,' he said. âIs this true? Let me remind the audience that, before this evening, we had never met.'

The volunteer stood. âI don't know nothing about no trapdoor,' he said. âAll I know is that one minute I was standing on the stage, the next, I was in that box. I don't know what this fella's on about. What I experienced tonight will haunt me till my dying day. My dying day, I say Â â¦Â '

âYour full name, if you would be so kind.'

âMaybury,' repeated Lord Ringmore. He looked at the Magnificent Meze then back to the man in the stalls, demonstrating a certain flair for performance himself. âMaybury,' he said again, rolling the word in his mouth. âIt's the strangest thing. Now I come to look at the two of you, I have to confess I see a certain resemblance.'

The Magnificent Meze laughed. âI would say the differences were more obvious than the similarities. Except, of course, that we are all God's children.'

âI was born in the ancient, mystical city of Baghdad.'

âAh, yes. I have travelled extensively myself. I spent a month in your beautiful home city. I found the view afforded from the Mountain of Osmagog most breathtaking.'

âThere is no such place,' snapped Lord Ringmore. âAnd I fear your complexion owes more to the generous application of boot polish than to your mother's colouring. In fact, now that I see you up close, I fear the stuff is rubbing off around your collar.' He turned to the audience. âThis evening you have been entertained not by a mystical medium called Meze, but by a two-bit performer called Maybury. David and William Maybury, a pair of brothers, married to the top and bottom half of the poor bisected woman whom you so enjoyed watching being halved this evening.'

âWhy, you rotten little Â â¦Â ' began the Magnificent Meze, dropping his accent. Seeing him approach with raised fists, Lord Ringmore stepped back and, with one swift movement, banged on a floorboard. A trapdoor below the Magnificent Meze immediately opened and the stage suddenly swallowed him up.

The audience gasped as though it was witnessing the final act of a play.

âLadies and gentlemen,' said Lord Ringmore, âI hope you have enjoyed this evening's performance. Personally, I hold the skill involved in these public deceptions in the utmost regard but please be under no misapprehension: nothing you have witnessed this evening owes the slightest thing to real magic.'

Perhaps deciding that this interruption was in fact a well-orchestrated part of the show after all, the audience marked Lord Ringmore's exit with one final appreciative round of applause.

FavoriteObsession by Nancy Corrigan
Heart of the Dead: Vampire Superheroes (Perpetual Creatures Book 1) by Gabriel Beyers
Unexpected Admirer by Bernadette Marie
The Genius in All of Us: New Insights Into Genetics, Talent, and IQ by David Shenk
Forbidden Music by Michael Haas
Silken Threats by Addison Fox
An Immoral Code by Caro Fraser
Cheaper by the Dozen by Frank B. Gilbreth, Ernestine Gilbreth Carey
Sweeter Than Sin by Andrea Pickens
The Silence and the Roar by Nihad Sirees