The Solomon Sisters Wise Up 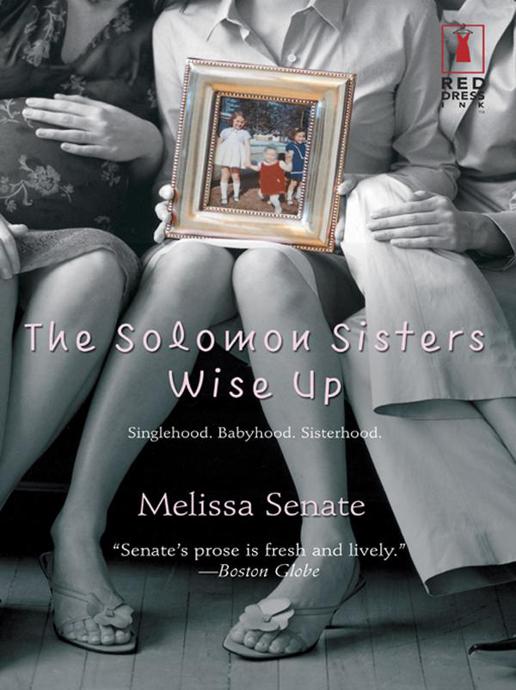 “See Jane Date
tells the tale of a smart, funny 28-year-old editor at a Manhattan publishing house who has been trapped in a 2-year date drought. Alas, she must dig up a presentable boyfriend to accompany her to her cousin’s fancy wedding. The mad date dash is on.”

“…a refreshing change of pace…”

“It’s fun to watch Jane bumble her way through the singles scene and find out that sometimes people aren’t what they first appear. Senate’s debut is both witty and snappy.”

“The story unfolds like a brightly wrapped bonbon. It’s tantalizing and tasty….”

“This Cinderella story provides plot and dramatic tension, but what makes it more than a fairytale is that Jane’s daily life…captures the very real loneliness of being a contemporary, urban single.”

Thirtysomething Melissa Senate lives in New York City with her husband, Adam, their son, Max, and their four cats, Pierre, Pandora, Thisbe and Blue. She has a bachelor’s degree in creative writing and is halfway through a master’s degree in English literature. A former book editor (women’s fiction and young adult), Melissa is now a full-time writer. Her debut novel, the bestselling
See Jane Date,
has been translated into over ten languages, is the subject of an answer to a question in the 20th Anniversary Edition of Trivial Pursuit and was adapted for an ABC Family telefilm.
The Solomon Sisters Wise Up
is Melissa’s second novel. Her third novel, featuring the character Eloise Manfred from
See Jane Date,
will be published in 2004. Visit Melissa’s Web site at www.melissasenate.com.

The Solomon Sisters Wise Up

For the two great loves of my life, Adam Kempler
and our baby son, Max.

B
etween the reality of being six weeks pregnant by a guy I’d been dating for two months and the fantasy of pushing a baby stroller down Columbus Avenue with a wedding ring on my finger were a lot of possibilities. All having much to do with Griffen Maxwell’s reaction to the news.

Him: “You’ve made me the happiest guy in the world.” (Drops down on one knee.) “Will you marry me?”

The problem with that scenario was that Griffen had yet to throw around words like
exclusivity,
let alone phrases like
I love you.
And according to my older sister, Ally, that was a good thing; it meant he was normal.
“You can’t love someone you’ve known for eight weeks,”
she’d told me.

Him: “Waiter—check, please!”(Runs out of restaurant, never to be seen or heard from again.)

I wanted to have more faith in Griffen than that, but as my sister had pointed out with another piece of unsolicited Ally-wisdom, I didn’t really
know-know
the guy. Not in the way you knew your husband, she’d said, or someone you’d been with a long time.
“Ordering in Chow Fun for two and tipsily watching
Fear Factor
or a Yankees game before sex one night during the week and one night of the weekend does not knowing a man make, Sarah.”

Which explained why I’d been stalling for the past half hour. At this very moment, the man in question was sitting across from me in Julien’s Brasserie, where he’d taken me to celebrate my twenty-ninth birthday. But instead of my throwing around words like
zygote
and phrases like
Diaphragms aren’t one hundred percent effective,
I was talking about the food.

Him:
“Delicious.”
(Forks a bite and leans across the table to slip it between my lips. Smiles that amazing smile.)
“Aren’t you going to try the champagne, birthday girl?”

There was my in. He’d unwittingly provided me with my segue into why—despite our knowing each other for only eight weeks—he would be tied to me for the rest of his life.

“What makes you think he wouldn’t want to be?” friend and co-worker Lisa had asked a few days ago on our lunch hour as we sat on a park bench, staring at pigeons and tossing them most of our sandwiches. “Maybe he’s more crazy about you than you think.”

Ah, the support of a best friend.

“Sarah doesn’t need bullshit,” our friend Sabrina had cut in. “He hasn’t exactly been acting like a guy who’s madly in love.”

I repeat: Ah, the support of a best friend. In Lisa and Sabrina, I had exactly what I needed: one who coddled and one who told the truth.

“Mmm…” Griffen murmured as he sipped his champagne, closing his eyes for a moment. “Good stuff.”

Tell him, I ordered myself. Tell him!

Wish I could chug the entire bottle, Griffen, but, alas, no bubbly for me for the next seven and a half months—I’m pregnant!

Thing was, as Griffen Maxwell of the dimples and pale brown eyes went on to tell me a funny story about an idiot news anchor (he’s a television news producer)—“She forgot to say
allegedly
murdered and now the station and network are being sued for millions!”—and stabbed his spinach salad and sipped his champagne and grimaced at the escargots I thought I had a craving for but now couldn’t bear the smell of, I wasn’t quite ready to change his entire life.

Which was exactly what one quarter-inch, horizontal pink line on the stick of a home pregnancy test did to me four mornings ago in a bathroom stall at work on an ordinary October Monday. Before that pink line, I was the usual me, fretting over whether my story ideas for
Wow Woman
magazine—where I was a junior editor—were good enough for the weekly staff meeting and my boss’s overplucked eyebrow, which rose whenever she liked an idea, as though she couldn’t believe a member of the underappreciated junior editorial staff had thought of it. I’d spent the previous evening coming up with five good concepts, including “Thirty Things To Do Before You’re Thirty.” I’d been particularly attached to that one, since I was about to turn twenty-nine and had done absolutely nothing on my list. But I could…take that solo trip to Paris! Go to a movie alone on a Saturday night! Read
Middlemarch!
Open a Roth IRA! Have sex in a naughty locale!

Because five nights ago, when I made up that list, I couldn’t have a baby. I couldn’t even fathom it, not even in the abstract—not yet, anyway. My salary, my roommate, my penchant for vodka and cranberry juice every Thursday, Friday and Saturday night, my lack of a serious relationship, let alone a husband, my distaste for milk, green vegetables, flabby abs, doctors with rubber gloves, pain and the unknown all negated the concept of baby.

“Jesus, Sarah, ever heard of birth control? What the hell is wrong with you? What are you, seventeen? If you need money, just ask, okay? Where would you put a crib in that shoebox of an apartment—in the kitchen next to the litter box? Do you want to move in with me and Andrew? How could you be so careless? What did your gyno say? Is she an OB too? Do you feel pregnant? How come you’re so goddamned fertile, anyway?”

Those were my sister Ally’s rush of questions, which followed a long silence when I told her the news at three o’clock this morning. I hadn’t meant to call Ally, hadn’t meant to tell her at all, at least not right away, not before I had a handle on it myself. But after tossing and turning for hours last night, with Griffen’s potential reactions getting scarier and scarier, I’d grabbed the phone and sobbed into it. After two hours, Ally had gotten me to stop crying and extracted a promise to call her the minute I decided what I was going to do. I knew what I was going to do, but you didn’t tell a lawyer that. You told a lawyer, one like Ally, anyway, that you’d think over your options very carefully.

And yes, I had been using birth control. I’d been fitted for a diaphragm a few years ago that hadn’t seen the light of day in a year and a half, until Griffen. I used it every time we made love. Fifteen times, to be exact. Griffen and I had settled into a twice-a-week pattern, on Tuesday or Wednesday night and either Friday or Saturday night. And during our second week of dating, when I didn’t even know if he had a middle name, we’d gone back to my apartment for a nightcap and unknowingly made a child.

I was amazed that no one could tell. Moments after the pink line changed everything, I’d stared at myself under the fluorescent lights in
Wow
’s bathroom mirror for ten minutes, puzzled that I looked and felt exactly as I had before the pink line. Same blue eyes. Same dark brown, just-past-the-shoulders straight hair. Same teeny-tiny scar above my lip. You couldn’t tell. Couldn’t see it. Everything was the same.

“Your boobs are bigger,” Lisa had said, staring at my reflection.

“And your feet are gonna grow half a size,” Sabrina had added later.

But I looked the same. I felt the same. Just as I had when I’d gotten my period for the first time at twelve and lost my virginity at nineteen. I’d been walking around pregnant for six weeks and didn’t know it. Miracles big and small were in the making in my own body, and I’d been eating bagels and taking the subway and having sex and complaining about work and my sisters as though nothing out of the ordinary were happening.

It never occurred to me that I might be pregnant. The only reason I even took the pregnancy test was because Lisa, who got pregnant once and lived in fear of it ever happening again, insisted. Lisa always kept a kit in her bathroom medicine cabinet and her desk drawer at work. She was on the pill and made her live-in boyfriend use condoms during ovulation days, but if her period was even a half hour late, she took a home pregnancy test for peace of mind. So when I’d whispered in the elevator on our way up to
Wow
’s offices that I thought my period, which I rarely kept track of, was late, but that I wasn’t worried because I had wicked PMS, Lisa looked at me very closely.

Dear Sir, I'm Yours by Burkhart, Joely Sue
Back to the Moon by Homer Hickam
Hell Hath No Curry by Tamar Myers
Fatal by Eric Drouant
Word of Traitors: Legacy of Dhakaan - Book 2 by Don Bassingthwaite
Lone Wolf #6: Chicago Slaughter by Barry, Mike
The Seduction of an Earl by Linda Rae Sande
The Marx Sisters by Barry Maitland
Wreck (Bareknuckle Boxing Brotherhood Book 2) by Nelson, Cara
Anastasia Has the Answers by Lois Lowry