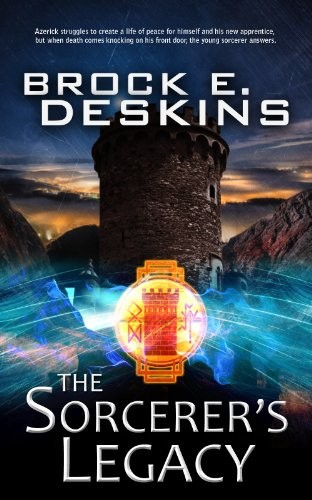 Book three of the Sorcerer’s Path

Copyright, Legal Notice and Disclaimer:
This eBook is licensed for your personal enjoyment only.  This eBook may not be re-sold or given away to other people beyond the conditions of your purchase.  If you would like to share this book with another person, please purchase an additional copy for each recipient.  If you are reading this book and did not purchase it, or it was not purchased for your use only, then please purchase your own copy.  Thank you for respecting the hard work of this author.

Azerick grasped the bars set in the wooden door of the cell, screaming and wrenching on them with all his strength as the man advanced upon his father, knife in hand.

The door gave way and Azerick rushed in to find the room in the grips of an inferno. Flames licked at nearly ever surface of the wooden structure. Screams of terror caught his attention and turned to find Jon and the others huddled in the far corner of the room.

Azerick called for them to flee, but when he turned back around, the door was shut tight and refused to open. He threw his shoulder into the barrier over and over as the flames consumed everything in the room.

The door finally surrendered to his abuse and he crashed through it and into another room where the drunken sailor was about to plunge a knife into his mother. He threw himself at the man, but instead of barreling into him, Azerick flew up into the air, leaving the city far below.

Azerick flew so high that the city was lost in the darkness of the night. A bright white brilliance suddenly put everything into stark contrast and nearly blinded him. An enormous blast leveled everything for miles around. Azerick felt the force of the explosion strike him like a wave of water, but instead of the expected thunderous boom, he heard the death cries of thousands of souls. Azerick awoke to those cries mixed with the faint sound of a woman’s laughter.

Had anyone ever experienced so much, suffered so much, and lost so much in so few years? In the last few years of his nineteen—or was it twenty now—years of life he had lost his home, family, more friends than he cared to remember, and his wife and unborn child. He was possibly wanted for murdering the son of a powerful nobleman. Was it murder? Did it even matter whether or not it was? Certainly not to Travis and probably not to his father, Lord Beaumonte.

The young sorcerer had been enslaved and turned into a pet to fight for the pleasure of a powerful and sinister creature imagined only in the worst of nightmares. He managed to escape the psyling’s control but at the cost of his wife and child.

He had also found stalwart friends in the men he sailed with and who he helped lead to freedom. He found friends in the dwarves who took him in and exchanged knowledge. Now he had a home, but not only was it a decrepit ruin, it was haunted by a spirit mourning for the loss of her family.

All these thoughts led to Azerick’s uneasy sleep that night. The faces of friends and family, both living and dead, haunted his dreams. It made him question what he really wanted in his life. Until recently, that answer had been easy—revenge. But his stay with Duncan, and even the year he spent teaching herb lore to Anna, had shown him that a life of peace and learning could be had, even rewarding. Perhaps he should let go of the past. It only seemed to bring more pain and destruction.

Azerick climbed out of his bed, sore and stiff. His back ached as he removed his shirt and looked at himself in the mirror. The shirt showed no signs of damage even though four long, dark stripes decorated his back where the spectral claws had raked him. His lungs burned whenever he took a deep breath as if they had been frost burnt. Azerick now knew the extent of what he faced. Now came the tricky part of figuring out what to do about it.

He could simply fight the undead creature, but his mind immediately thought of Delinda and their child she had been carrying. He knew the loss that held the spectre here in the world of the living and could not help but sympathize with her. He spent a good amount of the day pouring over his books in search of information that may help him solve this dilemma without having to destroy the distraught mother. Azerick found a few references to ghosts and haunting spirits but the information they contained provided little insight to a solution.

He finally gave in to his stomach’s incessant demand for food and went down to the common room just in time for lunch. The inn was busy with its lunchtime customers that appeared to be comprised mostly of the more prosperous storeowners and businessmen. With his new clothes, Azerick did not look completely out of place and drew no more stares than would any stranger to a new town.

The woman that came to his table and took his order was older but still managed to maintain enough of her good looks that Azerick could see that she was once a true beauty in her prime.

After a warm lunch of thick, savory stew and fresh baked bread, Azerick got directions to the only public library in the city. He made his way across the quarter and found the building easily enough. It was one of the grander structures even in this upper-class part of the city. Huge fluted columns lined the front and sculpted sphinxes stood guard at the foot of the wide stairs that led up to the polished bronze-plated doors.

Azerick was enthralled from the moment he entered the grand building. Although he could espy some small private reading rooms through arched doorways, the vast majority of the three-story structure was dedicated to books. Thousands of books and tomes sat in row after row upon shelves that lined every inch of the colossal chamber. Polished wooden ladders set on casters allowed access to the higher shelves. A grand central stairway set in the center of the room spiraled up to each of the upper floors.

“You look a bit overwhelmed, young man. Perhaps I can assist you if you are looking for something in particular,” a voice croaked to his right.

Azerick turned and saw an old man in well-tailored robes, slightly hunched over, and staring at him through a pair of gold-rimmed spectacles.

“This library is unbelievable. I thought the library at the Academy was extensive, but this is just incredible!”

The old man laid a withered hand on Azerick’s elbow and chuckled softly. “It has that affect on everybody who appreciates books the first time they lay their eyes on my library.”

“This is all yours?” Azerick asked incredulously then felt like a fool the instant the words left his mouth.

“Oh no, not mine personally but I have been here since I was a boy even younger than you are now, young sir,” the old man chuckled once again. “I have been the master librarian for sixty-three years now, so I tend to refer to it in a possessive form. No, the library belongs to all who appreciate knowledge. It was started by our duchess’s great grandfather within the first few years of his reign and it has been growing ever since. Of course, those of us with a bit of inside knowledge of certain original letters know that the true force behind its creation was his wife. You said you have seen the great library at The Academy did you?”

“Yes, sir, I was a student there for a short time,” Azerick replied.

“You seem strong enough for the Martial Academy but I detect a brilliant spark of intellect in your eyes that suggests you were a student of the Scholar, or perhaps even the Magus Academy,” the librarian deduced.

This time it was Azerick’s turn to laugh politely with the old man. “You have a keen eye, Master Librarian. Were you not a scholar you likely would have made an excellent magistrate.”

The old man laughed hard enough to draw a few stares but no one would dare rebuke the old librarian.

“Oh I can just see me now, hunting down criminals in the streets of the rougher districts, wielding a sword in one hand and a book of law in another!” he cackled as he flourished his ebony cane like he was dueling a brigand. Oh thank you, young man. I have not had a good laugh like that in some time. Oh, I fear I am becoming either senile or rude in my dotage. I am Morvic, Morvic the master librarian. Sounds impressive does it not—master librarian? My title and a few copper coins will get me a fresh baked roll on just about any street corner in the city,” Morvic chuckled once more.

“I am Azerick, Master Librarian, and you are most certainly not rude and I sincerely doubt a speck of senility,” Azerick returned graciously.

Azerick found himself immediately fond of the friendly old librarian.

“So tell me, young Azerick, and please call me Morvic, is that old coot Allister still grumbling about the Academy’s proud halls?”

“Yes Mas—er, Morvic. He is the one that pulled a few strings that allowed me to attend, but he is not, well I mean to say that…” Azerick stumbled over how to respond politely.

Conservative Affairs by Scott, Riley
Close Relations by Susan Isaacs
To Yank a Tiger by the Tail by Romans, Bobbi
Bride of Death by Viola Grace
Padre Salas by Enrique Laso
Blood of the Rainbow by Shelia Chapman
The Truth About Tara by Darlene Gardner
Multiple Choice by Alejandro Zambra
The Perfect Solution-A Suspense of Choices by Ey Wade
Freddy and Simon the Dictator by Walter R. Brooks