Read The Spider and the Stone: A Novel of Scotland's Black Douglas Online

The Spider and the Stone: A Novel of Scotland's Black Douglas 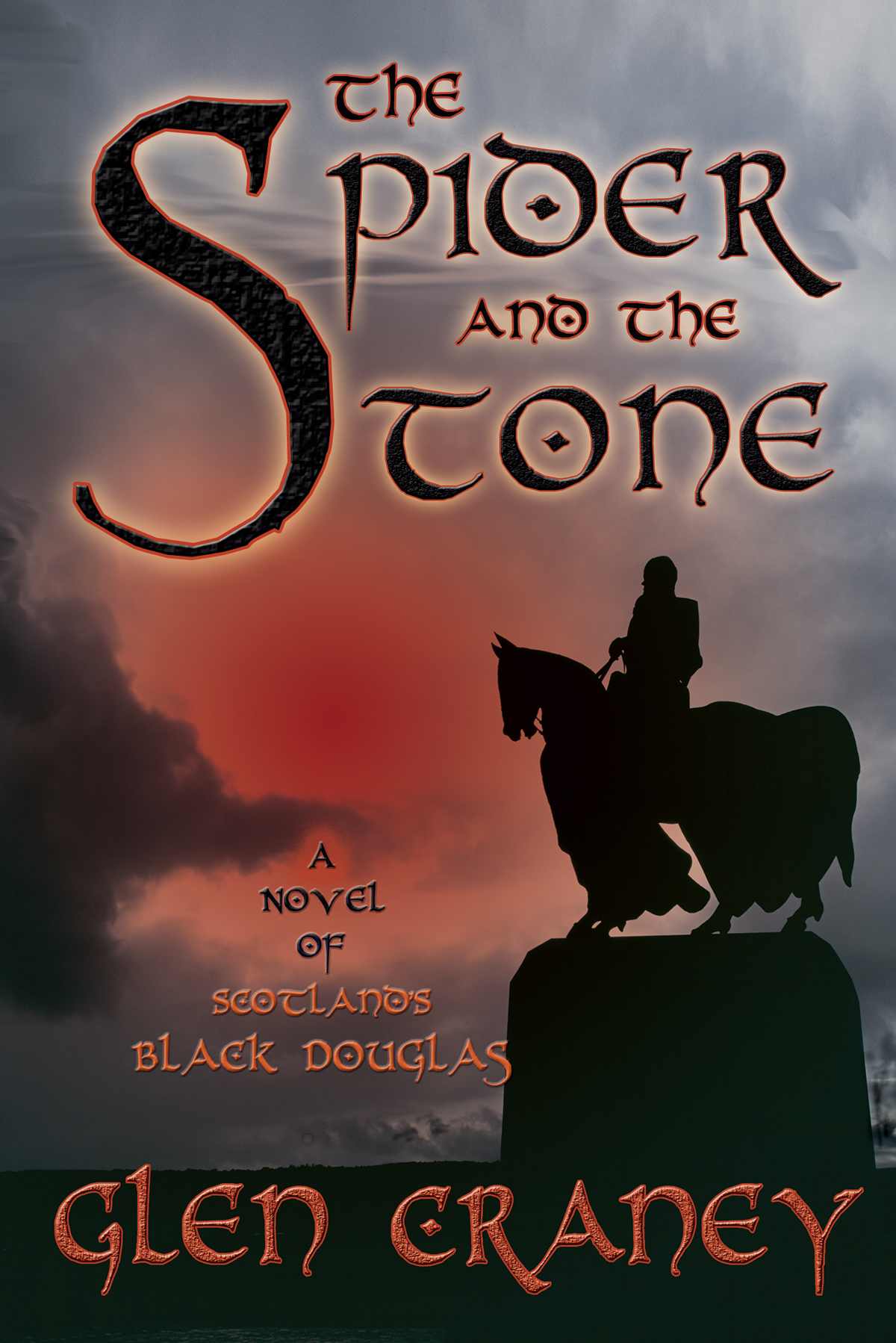 Title Page
Front Quote
Prologue
The Roll of Honor and Infamy
Map of Scotland and Northern England
Part One: The Hammer Rises

Wine is strong,
The King is stronger,
Women are strongest,
But Truth conquers all.

W
ILLIAM
D
OUGLAS PACED BEHIND THE
frozen earthworks that guarded Castle Rising, an old royal mint so
grim and neglected that it made London Tower seem hospitable. As the Earl of
Mar and patriarch of his clan of Lanarkshire warriors, he had survived English
assaults on the bloody fields of Neville’s Cross and Poitiers, but never had
his fortitude so lagged as it did now. Drafted by King David to serve as a ransom
surety for the onerous Treaty of Berwick, he was homesick for Scotland, having been
away for over half a year. He stole a glance over his shoulder at the
East Anglian peat beds that lay north across the low broads. If he and his
squire could break free of their warden, they might reach the Borders
and hide in the tangled briars of Ettrick Forest, just as King Robert’s mossers
had done half a century ago.

He
asked himself again: Why would the She-Wolf demand to meet
him?

Did
the brooding harridan seek to be entertained by his humiliation in defeat? No fellow Scot would shame him for wishing to shun the task at hand, for inside
that ice-corniced mausoleum prowled the most dangerous and reviled woman in all
the Isles. Isabella of France, the hoary old queen mother of England, had been
at various turns in her infamous existence an insatiable adulteress, a regicide
and usurper of the throne, a changeling who wore armor into battle and
perverted nature by making love like a man, a sorceress who had beguiled her
own son by slithering into his bed at night, a necromancer who held séances
with her beheaded—

The gate portcullis cranked up, and a detail of English pikemen in
hobnailed boots marched from the tower and across the ice-glazed boards.

The Scot earl sighed heavily, his last chance to avoid the ordeal now dashed. Led with his squire through an occulted archway, he searched the scratchings on the rampart stones for signs of Isabella’s witchery. In her youth, the queen mother had gained a reputation for being a meddlesome princess in her father Philip’s royal court in Paris, where she was said to have become privy to the heretical depravities of the Knights Templar. Bartered off to England as a marital bargaining chip in the conflict over Aquitaine, she had made good use of the cunning assassination methods perfected by those crusader monks. Her feckless husband, Edward Caernervon, had duly earned his toll paid to Hell, but only a woman who consorted with demons could have arranged so heinous a death for a deposed king. When Isabella’s first-born, Edward the Third, became old enough to climb atop the throne, he banished her from London, and she raged at the filial ingratitude by conjuring down the Black Death upon the Isles. Most believed that she had managed to survive these past twenty-seven years in this outpost only because she had long ago sold her soul to the Devil.

A forearm came roughly to the earl’s chest, halting him. The sergeant of the guard opened a door and prodded the earl and his squire into an austere room lit dimly by a solitary candle. The earl heard the lock latch behind him. As his eyes adjusted to the dusty gloom, he spied a silver cross with
fleur-de-lis
flanges crowning a small altar at the far wall. That corner of the room shimmered with movement. A bent hag, shrouded in the brown habit of a religious, arose with difficulty from a kneeler in the slant shadows and shuffled toward him.

The earl reached into his coin pouch and offered her a farthing,
as was one’s obligation when encountering a Poor Clare devoted to poverty.
“Forgive us,
cailleach
, for interrupting your prayers. Would you
inform the Queen Mother that William of Douglas awaits her summons?”

The nun kept staring
over his shoulder at his squire.

He feared she was
senile. “Good woman, did you not hear me?”

She snatched the coin from his fingers and, holding it under
the candle’s penumbra, traced a long nail over its raised profile.

He cursed under his
breath, suspecting that he had been led to the wrong chamber in a prank to
entertain the garrison. “I am Douglas of––”

“I know who you are.” The nun turned her evil eye again on
his squire, who remained a step behind him. “Who is
this
man?”

She returned the
farthing. “I have scandals enough attached to my name. If Parliament
were to learn that I accepted charity from a Scotsman, I would be led to
the block on the next morn.”

The earl retreated a step, abashed at having mistaken the She-Wolf
for a doted anchorite. He surrendered a grudging bow to the shriveled womb that
had given birth to his country’s sworn enemy. “I beg your forgiveness.”

Isabella smiled wanly as
she took their wet cloaks and hung them on pegs. “You will have to wait your
turn. There is a long line of men who seek God’s intercession for my
absolution.” She extended a tremulous hand to invite them toward the cold
hearth. “I would offer you wine worthy of your palate, but circumstances
have denied me such provisions.”

Easing his guard, the earl considered the possibility that this frail woman might not be
a bewitching harpy after all, but a victim of England’s cruel imagination. He
inspected her sparse quarters and wondered if she had accepted this living martyrdom
to draw off the ire of the fickle English and deflect their challenges to her
son’s legitimacy. Yet she was still a Plantagenet by marriage, attached to the
rapacious brood that was bent on crushing his country’s independence, and he could not
mask his hatred fueled by half a century of war. “We Scots are
accustomed to being denied provisions. We have England to thank for that.”

She nodded wistfully.
“And yet, I can remember a time when your forefathers dined uninvited at many a
table in Northumbria and Yorkshire.” She studied his features. “You are kinsman
to James Douglas.”

He braced for the
opprobrium that the admission always elicited here in England. “My father, many
years younger, was his half-brother.”

“Your uncle was the most troublesome of the many trespassers
who harried our northern shires.” She squinted to peer over his
shoulder again. “His skin was dark for a Scotsman, like that of your squire.”

Born in the year of his famous uncle’s death, the earl had
often heard the Good Sir James’s unusual coloring compared to that of a
Castilian. “Aye, hence they called him the Black Douglas.”

She waved off that explanation. “His dark countenance was not why he earned that wicked sobriquet. There is much you do not know about him.”

He bristled at the suggestion that she was better informed
about his clan’s heritage. “May I inquire, madam, as to the purpose of this
audience?”

Lifting the clotted candle from the altar, Isabella drifted
unsteadily toward the fireplace and stooped wincing to a knee. She held the precarious
flame under a pile of green wood until it took the spark. “I am told that the
Canterbury scribes are filling their chronicles with calumny about your uncle.”

Perplexed by her concern, the earl, long inured to the
Plantagenet industry of lies, shrugged with bitter resignation. “If paid
handsomely enough, those monks would defame St. Peter himself.”

Isabella stirred the fire, stalling for time as if debating his trustworthiness. “I am the last mortal still drawing breath who knew James Douglas. I wish to have my say on his deeds before I die.”

The earl was incensed to discover that he had journeyed three
days to this outback in the midst of winter merely to suffer a lecture on
Westminster’s version of Scot history. “I suppose you would have us believe
that he ran from a match of arms against one of your tourney hotheads.”

Her wrinkled mouth pursed
with faint amusement. “Lord Douglas feared no man. … But there was one woman who
daunted him severely.”

A snort of disbelief puffed the air near the door. The earl turned and glared at his squire, chastising him for the indiscretion.

Smiling at their
skepticism, Isabella arose from her knees with the earl’s assistance. She
wrangled a chair nearer the fire and, gathering a shawl around her ankles as
she sat down, taunted the two men with a challenge. “If you Scots are as stout of heart as you
always boast, surely you will not shrink from an old widow’s tale.”

The earl was intrigued by her claim of distant acquaintance with the Good Sir James. He agreed to hear her out, for in truth he had no choice, given the exigencies of his diplomatic commission. When Isabella motioned for him to bring up stools aside her, he complied, but his squire insisted on standing in the shadows behind him, as his duty required.

The queen mother stared for nearly a minute at the crackling hearth, as if scrying a vision in the flames. Then, rousing from this trance, she smeared the tip of the poker with charcoal and sketched a crude map of the Isles on the flagstone near her feet. “Long before you were born, your King Alexander died without siring an heir.”

Alarmed, the earl glanced behind him, wondering if his squire also detected that her voice now sounded altered and otherworldly. Was the woman using her conjury to bring forth a spirit from beyond the veil?

Isabella tapped the floor with the poker to reclaim their
attention. Gaining it, she scratched a mark on the southeastern region of her
map to indicate the location of a port city at the eastern crease where
Scotland and England met. “Four years before this century turned, your
throne fell empty, and the clans commenced scrapping for it like charnel dogs over a carcass. All the while, the Leopard of England stalked the Borders, sniffing blood and
champing to pounce when the Lion of Caledonia fell lame from self-inflicted
wounds.”

The Devil In Disguise by Sloane, Stefanie
A Morning for Flamingos by James Lee Burke
First Strike by Pamela Clare
To Love a Cop by Janice Kay Johnson
The Ruby Tear by Suzy McKee Charnas
Hunter (Campus Kings): A Football Secret Baby Novel by Celia Loren
Enticed by Malone, Amy
Sweet Home Carolina by Rice, Patricia
Bliss by Renee Field
You Belong to Me by Johanna Lindsey