Read The Spoon in the Bathroom Wall Online

The Spoon in the Bathroom Wall 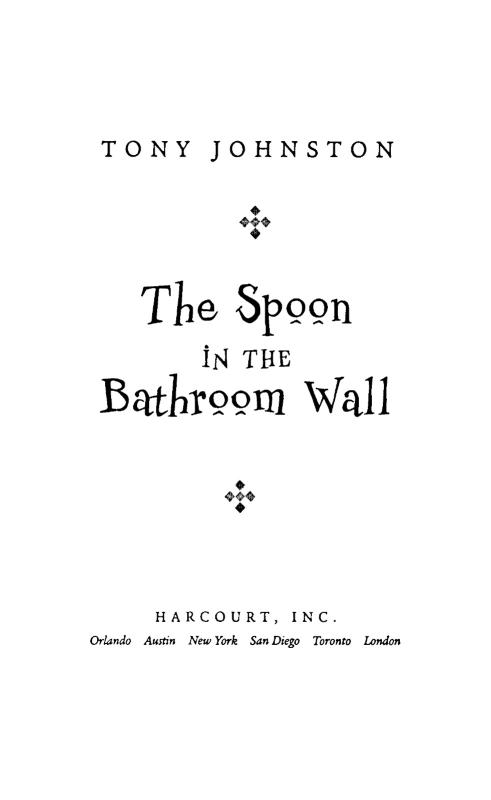 The Library of Congress has cataloged the print edition as follows:
Johnston, Tony, 1942â
The spoon in the bathroom wall/by Tony Johnston,
p. cm.

For Jeannette Larson, a king among editors
For Larry Onderdonk, who loves bacon
For Martha Tolles, who always looks to the positive
And with thanks to the other wizards of our writers' group

For if dreams die

Life is a broken-winged bird

For when dreams go

Life is a barren field

The boiler room was like an oversize cracker box. A maze of steam pipes ran side to side along the walls, up and down, every which way, carrying steam to all the other rooms, heating the school in winter. Unfortunately, Horace E. Bloggins School was as old as mold. Nothing worked right, especially not the ancient steam pipes. So they also heated the place in summer.

The constant
blup
and
phlut
of water gargled in the metal throats of the boiler-room pipes. Some clunked and clanked in an everlasting racket. Year-round, Martha and her father wore earmuffs to muffle the cacophony. (It didn't help much.) But their voices got muffled, too, so they had conversations like this:

Luther: “Drat! Whacked my finger with the hammer!”

On a daily basis, the Snapdragons were nearly cooked, like crustaceans in a pot. They sweated a lot and their skin was as pink as
SPAM.
But even though the boiler room was sweltering hot, they were grateful that the principal, Dr. Klunk (rhymes with
junk
), gave them a roof over their heads, as part of Luther's (very low) pay.

Luther Snapdragon was the school janitor, on call both day and night. Dr. Klunk woke him up whenever he felt like it (sometimes just for fun). Luther didn't mind. Times were tough and he was happy to have a job and a place to live for his little daughter and himself.

Martha's mother had died some years before. Since then Luther Snapdragon had seemed a bit lost. But he loved his daughter and tried valiantly in his cloudy way to take care of her.

“Look to the positive, Martha,” he often said, trying to keep their spirits up. “Imagine something wonderful about our little home.”

Martha was always hungry. So she would scrunch her eyes shut and imagine her favorite thing, bacon, looped over every inch of pipe. Scrumptious bacon, popping and sizzling.

But the Snapdragons were too poor to buy bacon. Sometimes they poached eggs in a pot on the pipework instead. They had to sling their laundry there, too, both clean and dirty. The light was bad, so often they wore dirty clothes instead of clean. Oh well. That didn't matter. They had each other.

Martha was proud of her father for his hard work and devotion (thirty-seven years come July) to Horace E. Bloggins School. She knew how hard he worked, for the school and for her. So she tried to take care of him, too.

Bloggins was a good school in lots of ways. It had some great teachers. It had nice lawns. And trees. It had cool brick hallways with great sayings chiseled into them. Sayings like:

MATH IS TONS OF FUN.

One bad thing about Horace E. Bloggins School was Dr. Klunk. The principal was pudgy and pasty and bald as a bottle, with beastly little eyes like mean raisins. He looked like the Pillsbury Doughboy stuffed into a suit.

Dr. Klunk wasn't a doctor at all. He lied about that. He wasn't a real principal. Big fat fib. But he
was
a sneak. That's how he'd squirmed himself into this Place of Power.

Dr. Klunk wanted to boss everybody. And to be rich. But he was too sneaky to do his own dirty work. He got the school bully, Rufus Turk (rhymes with
jerk
), to spy on teachers and dig out their secrets. Then he could
really
boss them around (and pay them less). Rufus stole kids' lunch money for Klunk. In exchange he and his gang could do whatever they pleased.

Rufus was a runty kid, like Napoleon. He had a pinchy face like a boll weevil, ratty little teeth, and hair the color of an orangutan. It was unfair to compare him with orangutans, for those apes are gentle creatures. Rufus wasn't.

Once he'd stuck a kindergartner in a tree. He laughed like crazy while the little kid bawled. Dr. Klunk had ordered a pizza and plunked a chair nearby. He laughed, too, spitting out pepperoni. Martha couldn't bear it. She'd scrambled up, helped the kid down, and got one thousand demerits.

Kids didn't bother to tell their parents what went on at Bloggins. They used to, but their parents didn't believe them. They believed the principalâimagine! Martha didn't tell her father much, either. She didn't want to worry him. Besides, Luther Snapdragon was too kind to think that anybody could be so evil. “Look to the positive,” Luther would have told her. “At least you
have
a principal.”

Rufus loved to terrorize everybody. But mostly he loved to torment Martha Snapdragon. Just seeing her fried his brain with anger. Sometimes he tied Martha's shoelaces together. Then he gave her a shove. Poor Martha hopped a lot, then fell on her face and got all scraped up. One or two of the other kids laughed, but mostly they felt sorry for her. They liked Martha. She'd saved lots of them from Klunk and Rufus. (So Rufus hated her even more.)

Rufus also squished chewing gum into her hair. Though she cut it out as carefully as she could, Rufus kept sticking gum into it. Her hair always looked like a horse had chewed it.

“You're nuthin' but a
brain-o!
” Rufus hollered whenever he saw Martha. “And your father's the janitor! Har! Har! Har!” (His father made movies and went to parties and ate sushi with movie stars and did other important stuff.)

Martha felt glum. Why was Rufus after
her
? She had no idea. She hated the taunts and the shoving and the chewing-gum treatment, but she hated jeers about her father more. And she couldn't stand that ruffian bullying little kids. But Martha was just one girlâusually limp as uncooked bacon, from sleepless nights and skimpy meals. She just had to take it. Martha couldn't do anything about Rufus. She could do even less about Dr. Klunk.

In spite of everything, Martha Snapdragon liked school. She did her lessons cheerfully (though sleepily) and earned high marks. She was the best pupil in the fourth grade; Rufus was the worst. Most kids looked up to Martha, she was so smart. (And she never showed off about it.)

English was as easy for her as pouncing is for a cat. She was a whiz in mathâfor years she'd been figuring out the price per ounce at the market so she could buy the cheapest items. Science, however, was Martha's best subject. And her favorite.

Her science teacher, Mrs. Ferlin (rhymes with
Merlin
), taught with such pizzazzle, the kids thought she used magic. When they studied space, Mrs. Ferlin levitated potatoes of different sizes into their proper places around a floating pumpkin, to represent the planets zooming around the sun. All the kids
ooh
ed and
aah
ed. When the lesson was done, they ate mashed potatoes and pumpkin pie (with whipped cream).

Dr. Klunk was sure Mrs. Ferlin was up to something BAD. But hard as he tried, he could never catch her at it. For spite he called her just plain Ferlin. Pretty soon everybody did. She didn't care. She was peculiarâin a good way. Martha wanted to be just like her.

Though Martha was happy in her studies at Horace E. Bloggins, she dreaded seeing Rufus. One day she was playing four square with her friends. She spotted Rufus and his hoodlums swaggering around. Their T-shirts were loose. Their pants were so baggy, they were falling off. Their smirks said, Don't we look cool? (They didn't.)

They swarmed up to Martha.

Martha's heart banged like a bongo drum. Her hands went clammy. What was he going to do? She braced for a ruthless hecklingâor a general pulverizing.

(Rufus didn't really know what all those words meant. He was spouting them from a thesaurus he'd stolen.)

“Fine,” said Martha in the strongest voice she could muster. “And my name is MARTHA,” she added proudly. (It was also her dear deceased mother's name.)

Dr. Klunk was walking by. He jumped right in. “MAR-THUR! MAR-THUR! MARTHUR!” Then he waddled to the office and boomed the name over the loudspeaker.

Like a bad case of chicken pox, the awful new label raged through school. By lunchtime Martha was as forgotten as Horace E. Bloggins. Now she was Marthur, a name as heavy as mud. She'd rather have been pulverized by a busload of bullies, clobbered by a clan of Klunks.

After school Martha wandered off by herself down a dim and lonely corridor. She wanted to be alone. She didn't want to hear that horrid new name.

Suddenlyâhow funnyâshe felt a strong pull to look up. So she did. She noticed a curious saying chiseled into a slab of bricks above her. A saying she'd never seen before:

The King Is Comingâ
and It's About Time.

(It was worked up in weird old-fashioned writing.) She wondered.
How did I ever miss this?

Here at Horace E. Blogginsâa king? What a silly thing!
Kings were for
old
places, like England or Persia or maybe even Tasmania. Martha didn't really believe it. Still, for a moment she was full of hope. She felt certain that kings were better trained than principals. Better than
her
principal, anyway. A king would make things good for the kids at Bloggins. She thought,
Well, if he's coming, he'd better come NOW.
Maybe a king could even help her with Rufus and Klunk.

Vows by Lavyrle Spencer
The Frenzy Way by Gregory Lamberson
CHAINED TO YOU: The Contract by Alexia Praks
The Horsemasters by Joan Wolf
Hot Sur by Laura Restrepo
Blood on My Hands by Todd Strasser
Blazing the Trail (Sunshine & Shadow Book 5) by Alie Williamson
The Swiss Family RobinZOM (Book 3) by Perrin Briar
Motion for Murder by Kelly Rey
Wedding Drama by Karen English