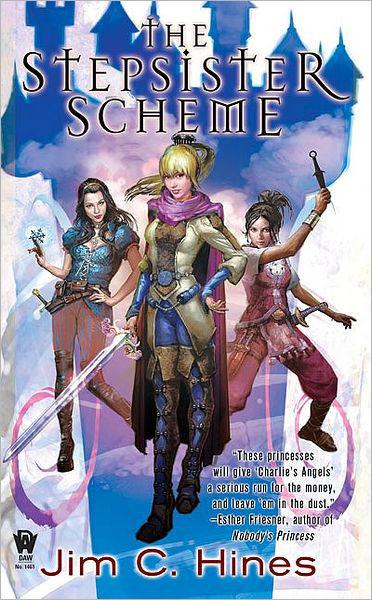 “WE WILL FIND PRINCE ARMAND.”
Danielle’s throat tightened.
“South,” said Snow. “Charlotte fled south.”
“We’re on the northern edge of an island nation,” Talia said. “Do you think you could narrow it down a tad?”
“I can’t. She’s hidden from the mirror, the same as Armand.”
Danielle cleared her throat. “My father’s house is south of here.”
Talia shook her head. “Charlotte knows we’ll be hunting her. To hide in such an obvious place would be the height of stupidity.”
Danielle folded her arms. “Charlotte let her mother cut off part of her heel because she believed that would be enough to convince Armand she was me.”
“Good point.” Talia snorted. “Come on, Snow. Let’s go visit the de Glas house.”
“I’m going too,” said Danielle.
“Charlotte already tried to murder you once today,” said Talia.
“I lived with Charlotte and Stacia for most of my life,” said Danielle. “I know them. I can help.”
Talia turned to the queen. “Bea, I’ll have my hands full keeping this one out of trouble.” She jerked a thumb at Snow, who rolled her eyes. “I can’t be a nursemaid to both.”
Danielle folded her arms. “Forgive me, Your Majesty, but your son is also my husband. My own stepsister may have taken him. The question isn’t whether or not I’m going after her, it’s whether or not these two are coming with me. . . .” 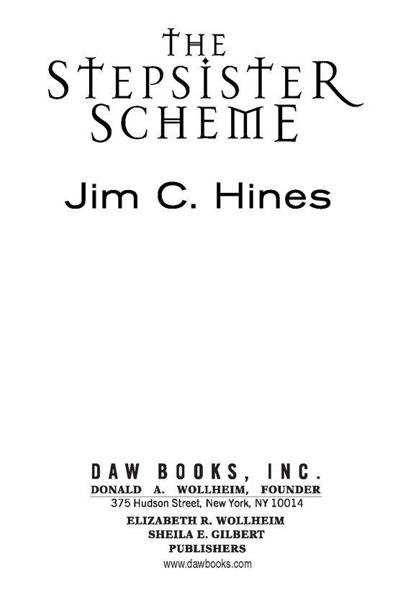 Copyright © 2009 by Jim C. Hines.
eISBN : 978-1-440-65868-6
The scanning, uploading and distribution of this book via the Internet or via any other means without the permission of the publisher is illegal, and punishable by law. Please purchase only authorized electronic editions, and do not participate in or encourage the electronic piracy of copyrighted materials. Your support of the author’s rights is appreciated.
Nearly all the designs and trade names in this book are registered trademarks. All that are still in commercial use are protected by United States and international trademark law.
First Printing, January

CHAPTER 1
D
ANIELLE WHITESHORE, FORMERLY Danielle de Glas, would never be a proper princess. Not if the title required her to actually remember so many trifling details. She hadn’t even learned the proper forms of address for human politicians, and now her tutor expected her to memorize
The Mortal’s Guide to Faerie Courtesy: Navigating the Eightfold Path of Fey Politics
by the end of the week?
True, it was mostly her own fault. After her wedding, the king’s steward had presented her with a trunk full of scrolls and books, “To study during your tour of Lorindar.”
For three months that trunk had gathered dust while she and Prince Armand traveled the kingdom. She had tried to study, but there was so much to see. The old Coastal Highway to Colwich, with the ocean to one side and snow-painted oaks on the other. The bridge to Emrildale, built centuries ago by dwarves without mortar of any sort. Only the weight of the intercut stones held the great arches aloft. Every day brought new wonders.
With Armand’s help, Danielle had learned enough to avoid embarrassing herself as she was introduced to various lords and ladies. She still couldn’t remember the difference between a viscount and a baron, but so long as her mistakes were minor, nobody dared to complain.
As for the nights . . . her cheeks grew warm. Suffice it to say, she had spent very little time studying
books
. The extra three days they spent snowed in at South Haven had been particularly educational.
Still smiling at the memory, Danielle picked up another book from the bedside table. She opened to a random page and read:

Indulge not overmuch
in wine or beer.
Pick not thy nose,
scratch not thy rear,
and all shall say
“A lady sits here.”

Danielle slammed the book shut and tossed it after the first. Much more of this, and she would be ready to go back to cleaning floors and cooking meals for her stepsisters.
She stood and rubbed her eyes. The polished black-and-white tiles were cool beneath her feet. The breeze from the open window carried the damp, salty taste of the ocean.
Her nose wrinkled. The breeze also brought the faint smell of manure from the gardens below.
Danielle walked to the window and knelt on a padded bench which had been embroidered with some royal crest or another. This one had a blue unicorn and a green bird that looked like a bloated chicken.
She pushed open the window, running her fingers over the rippled panes of glass. Tiny specks marred the glass: iron filings scattered into the mix when the panes were first formed. Pixie glass was supposed to protect a room from fairy magic, but in truth, iron only affected the weakest of curses. Still, enough people wanted such protection to keep Danielle’s father in business for a good many years.
She smiled, remembering one of her father’s last pieces, a window he had done for Duke Rokan of Little Hill. Mere filings sprinkled like pepper in the glass weren’t enough for Rokan. For two weeks Danielle’s father had worked to align dozens of tiny iron crosses, each one spaced evenly over the glass. A second layer of glass was then baked over the first.
Danielle had been only eight years old, but she remembered the finished window so clearly she could almost reach out and touch it. Not a single bubble or ripple had marred the glass. At a casual glance, the crosses appeared to float in midair within the frame.
A loud cooing sound made her smile. She leaned out, twisting her head to see several pigeons and one old dove perched on the green copper gutters which ran the length of Whiteshore Castle. The dove fluttered down to land on the sill beside her arm.
Danielle laughed. “I’m sorry, I’ve nothing to give you. You’ve already feasted on leftover muffins, cookies, and that bit of jam sandwich I smuggled up yesterday. If I feed you any more, you’ll be too fat to fly.”
The dove opened his mouth and cooed again, clearly unconcerned by such eventualities.
“Your Highness?”
Danielle jumped, and the dove fluttered his wings in annoyance.
A servingwoman stood in the doorway, a wooden tray in one hand. A trencher of bread sat in the middle, filled with glazed cherries and strawberries. A bronze cup stood beside it.
“Good morning, Talia.”
The morning sun shone on her brown skin. Her voice was clear and smooth, almost musical. Only the slightest accent, an emphasis on the longer vowel sounds, distinguished her words from a native Islander. Danielle guessed her to be from the Arathean Deserts to the south, but Talia had never responded to Danielle’s overtures.
Danielle still couldn’t remember half of the nobles who visited each day, but she knew the names of every servant in the palace. Some were uncomfortable with the princess’ familiarity, while others had started to relax in her presence.
Talia fit neither category. Strong and slender, she appeared only a little older than Danielle’s eighteen years, yet something in her bearing made Danielle feel like a child. She bowed her head slightly, every movement proper, but her dark eyes met Danielle’s without flinching. “I thought you might appreciate a snack.”
On the windowsill, the dove cooed and hopped closer. Danielle glared in mock annoyance. “Did you arrange this?”
“Highness?” Talia was staring at the dove, clearly skeptical of a princess who chatted with the birds.
“Thank you for the food,” said Danielle. “I appreciate your thoughtfulness.”
Talia nodded and brought the tray around the bed. With her free hand, she stacked Danielle’s books to one side of the bedside table, then set down the tray, all so smoothly the wine in the cup barely even rippled.
The movement pulled back Talia’s sleeves, revealing pale scars across her right forearm. Talia noticed Danielle’s gaze, but didn’t bother to adjust her shirt. Instead, she moved to the bed, straightening the covers and returning
The Mortal’s Guide to Faerie Courtesy
to the stack on the table.
“Don’t worry about that,” Danielle said. “I can—”
“You are princess of Lorindar, Your Highness,” said Talia. “Not some ash-covered slave girl from the city.”
Danielle flushed and turned away. Everyone in the palace knew of her past, though nobody would speak of it to her face. Within days of the winter ball, rumors had spread through the city, growing wilder with every retelling: she had snuck from her house to attend the ball—no, she had stolen a carriage—no, she had ridden within an enchanted pumpkin, drawn by giant mice!
ADS
15.4Mb size Format: txt, pdf, ePub

Wherever You Go by Heather Davis
Not the Marrying Kind (Destiny Bay Romances - Forever Yours) by Conrad, Helen
Soren's Bondmate by Mardi Maxwell
Murder Takes A Bow - A Betty Crawford Mystery (The Betty Crawford Mysteries) by Marvin, Liz
27 Blood in the Water by Jane Haddam
Storm: Book 2 by Evelyn Rosado
Crossfire (Book 1) (The Omega Group) by Andrea Domanski
The Invisible Bridge by Julie Orringer
Sweet Resolve (The Lucky #2) by Jill Sanders
Cockney: A Stepbrother Romance by Irons, Aubrey