Read The Strong Man: John Mitchell and the Secrets of Watergate Online

The Strong Man: John Mitchell and the Secrets of Watergate 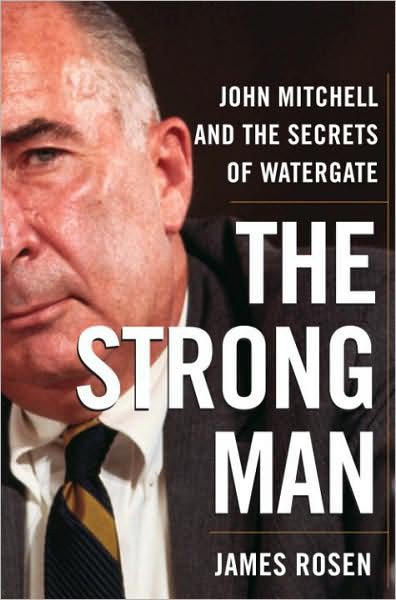 I
NTO THE
F
IRE

T
HE
B
IG
E
NCHILADA

B
LEED FOR
M
E

H
ANDS OF THE
G
ODS

For my beloved mother and father,

who gave me life—

I think that the current time in the affairs of men are to the point where these stories are now out, they should be fully explored…. I think, however, that great care should be taken to ascertain who was involved and how they were involved, instead of just lumping it into a catchphrase of “Watergate” or “cover-up” or things like that. I think it is time that the individual activities be properly parceled out.

History means the endless rethinking—and reviewing and revisiting—of the past. History, in the broad sense of the word, is revisionist. History involves multiple jeopardy that the law eschews: People and events are retried and retried again.

ON JUNE 22, 1977,
the sixty-seventh attorney general of the United States, John Newton Mitchell, strode onto the grounds of the Federal Prison Camp at Maxwell Air Force Base in Montgomery, Alabama, and began serving his sentence for convictions on conspiracy, obstruction of justice, and perjury charges in the Watergate cover-up. “It’s nice to be back in Alabama,” Mitchell told reporters with defiant jocularity.

With his next step, he became the highest-ranking U.S. government official ever to serve time: Federal Prisoner No. 24171-157. Inmates lined Maxwell’s walkways for a glimpse of their new neighbor.
They got you now, Big John!
they jeered.
You’re nothing but another convict with a number now!
On the winding path to his cell, Mitchell visited offices where his own signature hung on the wall, conferring power on the same individuals who now welcomed him into federal custody.
2

Many lives were ruined in the Watergate maelstrom. However, ex-President Richard Nixon, disbarred but pardoned, and ex–Vice President Spiro Agnew, who pleaded nolo contendere to tax evasion charges, both escaped the public servant’s ultimate shame: incarceration. Not so John Mitchell. Like many of his fellow Watergate defendants, the former attorney general could have traded evidence, real or fabricated, against a more senior official—Nixon himself, in Mitchell’s case—in exchange for leniency, perhaps even avoided prison altogether. But Mitchell did not do that. Instead, he asked Watergate prosecutors to cease their pursuit of the president in exchange for his own guilty plea; the prosecutors refused.
3

Equally unlike his fellow Watergate convicts, Mitchell never published a book about his years in power, never sold his soul to pay lawyers’ fees, never dished dirt on Richard Nixon to delight university audiences on the lecture circuit or viewers of
The Mike Douglas Show
. He never “found God.” In electing to tough it out, one columnist wrote, Mitchell stood “up to his hips in midgets among the other Watergate characters…divided the men from the boys.” “Among the WASP Westchester country club Mafia,” another columnist observed of Mitchell’s behavior in Watergate, “the code of
omertà
holds.” Richard Nixon, toasting his former attorney general at a post-prison party he threw for Mitchell in San Clemente, put it simplest: “John Mitchell has friends—and he stands by them.”
4

This stoicism and loyalty exacted enormous costs: personal, professional, financial. Mitchell’s criminal convictions made it fashionable to regard his tenure as attorney general, the capstone to a brilliant legal career on Wall Street, as merely a prelude to scandal; his stewardship of the Department of Justice, from 1969 to 1972, a lawless dress rehearsal in the dark theater of repression. Critiquing the Senate Watergate hearings for
The Observer
of London, novelist Mary McCarthy saw in Mitchell “shades of the late Senator Joe McCarthy…an old-style, coarse, crony-type law-and-order politician and backroom mouthpiece…a proto-fascist mentality” who “brought evil into the Caucus Room.” Former U.S. Attorney Whitney North Seymour Jr., who unsuccessfully prosecuted Mitchell on influence-peddling charges in New York in 1974, wrote the following year, after his guilty verdict in the Watergate cover-up trial, that Mitchell “acted in a fashion totally inconsistent with the standards of integrity and impartiality required of the chief legal officer of a great nation.” “The idea of Mitchell as the United States’ constitutional guardian staggers the imagination,” agreed historian Stanley Kutler in 1991. “Mitchell apparently never understood the American Revolution, let alone the Constitution.”

Many on the left had always seen him this way. Mark Rudd, a founder of the radical subversive group the Weathermen, contemptuously dismissed Mitchell as “a Wall Street Nazi.” The
New Republic
fumed in 1970 that “John Mitchell personifies and encourages some of the worst tendencies of this administration.”
The Nation
worried that “so great is the current preoccupation with crime and ‘law and order’ that we are in danger of permitting, by default, this grim-lipped attorney general to fashion the legal structure of a new-style police state.” “Liberty under the law is under the most severe attack in America since Joe McCarthy’s hey-day,” fretted the
New York Times
’ Tom Wicker, a few months after Woodstock. Yale Law School professor Alexander Bickel complained to
Newsweek
that Mitchell was advancing “the most breath-taking claim for untrammeled executive authority since Lincoln” the
New Yorker
interpreted his every act as a “signal from the administration that it believes a nation of laws is no longer workable.”
5

Yet many others, from both sides of the political aisle—particularly those who knew Mitchell well, worked with him on Wall Street, in the Department of Justice, and at the Committee for the Re-Election of the President (CRP)—drew a starkly different portrait. “He was a great man,” lamented Brent Harries, Mitchell’s friend of twenty-five years from the municipal bond business. “A tremendous worker, loyal, nice to people, good to [them]—he made probably millionaires out of those lawyers he worked with. He rewarded people well, they worked hard, and they’d bust their ass for him, but he took care of them.”

Rob Odle, a young aide at the White House and CRP who first met Mitchell prior to the ’68 campaign, encountered a man far different from the image that preceded him. “He was so unpretentious, so plain, so nice, so at ease that he made you feel at ease. That wasn’t quite what I expected; I expected a mean, tough, gruff guy, and he wasn’t that at all.” Michael Raoul-Duval, who worked under John Ehrlichman as associate director of the Domestic Council and later served as special counsel to President Ford, told a symposium audience in the mid-1980s: “John Mitchell is one of the most misunderstood public figures that I’ve ever known. He is one of the most gentle, unassuming, humble men that I’ve met who got to the level of the Cabinet.”

Even John Dean, who served as an associate deputy attorney general under Mitchell before becoming White House counsel, and who later proffered the most damning testimony against his former boss, told an interviewer in 1977: “The John Mitchell I know is far different from the man the public perceives. I saw him more as a restraining influence on Nixon and some of the people in the White House…. If not for Mitchell, Nixon might have been even more forward in his actions.”

Finally, and most compelling, was the word of Erwin N. Griswold, the revered dean of the Harvard Law School for twenty-two years who was named solicitor general of the United States by President Johnson and continued in that office for the entirety of President Nixon’s first term. Griswold’s stature in the legal fraternity was unrivaled. “Dean Griswold has, in the world of law and learning, become a legend in his own time,” said Senator Edward Kennedy. “He has earned a position of respect and renown for his ability as an attorney, scholar, teacher and educational leader, as well as a public-spirited citizen and family man.” As solicitor general, it was Griswold’s duty to argue the positions of the federal government in all cases before the U.S. Supreme Court. In such cases, with nothing less than the future of American jurisprudence and society at stake, surely an attorney general determined to use the Justice Department as “a partisan instrument for pursuing presidential policies,” as one Oxford-educated historian has charged Mitchell, or who “had no respect for rule of law,” as the leading scholar of American attorneys general has written of him, would have taken extraordinary pains to prejudice Griswold’s work and actions; yet Mitchell did just the opposite.

“All I can say,” wrote Griswold in 1992, “is that Mr. Mitchell was always fair and square with me. I never saw anything in our association in the Department of Justice which gave me concern about his integrity. Generally speaking, the attorney general left me alone. He understood that I wanted to act professionally, and he did not seek to interfere with that.” Indeed, Griswold recalled that Mitchell “shielded me from several matters…[and] served to protect me from a good deal of direct pressure” exerted by political appointees in the Nixon White House.
6

When Mitchell emerged
from Maxwell, on January 19, 1979, the oldest and last of the president’s men to leave prison, a ghost from the era of the Chicago Eight and Kent State disgorged, incongruously, into the age of
Star Wars
, disco, and designer jeans, he wryly told the assembled news media: “From henceforth, don’t call me, I’ll call you.” But no biographer ever did. Yet by that same year, the world had three books about Mitchell’s late ex-wife, Martha, an emotionally disturbed alcoholic whose late-night crank calls splashed her face across the front pages of every newspaper and magazine in America. Stunningly, no one bothered to chronicle the life of John Mitchell: child of the Great Depression; World War II combat veteran; Wall Street innovator; gray-flannel power broker to governors and mayors in all fifty states; Richard Nixon’s law partner, consigliere, and winning campaign manager in 1968 and 1972; America’s top cop, as attorney general, during the Days of Rage, the May Day riots, and the Pentagon Papers; and Public Enemy Number One when, in the words of a British observer, “the great black cloud of Watergate seemed to settle over America like a kind of grand judgment, not just on Nixon himself, but on the whole of post-war America.”
7

To understand this “grand judgment,” to ensure the facts and lessons of the Watergate scandals are properly recorded, requires a revisiting of John Mitchell, and his extraordinary life and times, that the man himself, with his penchant for privacy, would surely have discouraged. If America truly aspires to be “a nation of laws,” it can ill afford to leave unexamined the conduct, and treatment, of its highest-ranking government official ever to be convicted on criminal charges—especially when that same figure was the nation’s chief law enforcement officer.
The Strong Man: John Mitchell and the Secrets of Watergate
aims to fill this unacceptable gap in the sprawling literature of the Nixon presidency, and in our understanding of American society in the second half of the twentieth century.