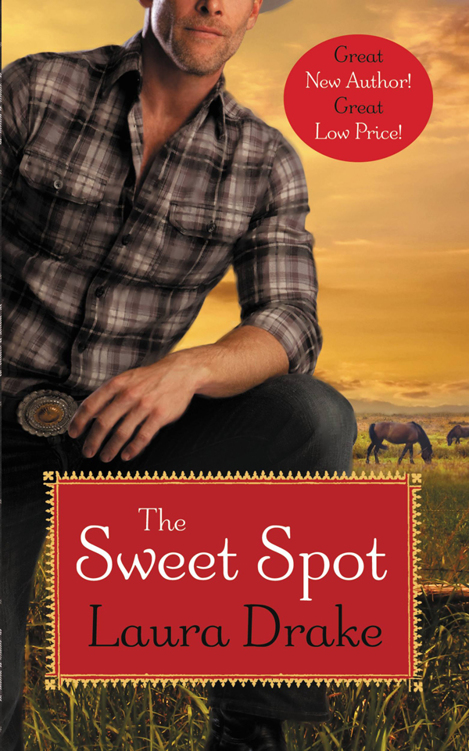 A Preview of
Nothing Sweeter

In accordance with the U.S. Copyright Act of 1976, the scanning, uploading, and electronic
sharing of any part of this book without the permission of the publisher constitute
unlawful piracy and theft of the author’s intellectual property. If you would like
to use material from the book (other than for review purposes), prior written permission
must be obtained by contacting the publisher at [email protected] Thank you
for your support of the author’s rights.

To Lady Beans
Thank you. For everything.

This book wouldn’t have happened without many hands, reaching back. First, my critique
partners, Fae Rowen, Jenny Hansen, and Sharla Rae (thanks for letting me borrow your
name!) Thanks to everyone at OCCRWA, the best writer’s group on the planet.

Thanks to the bull riding insiders, who helped a city girl get it right: Clint Wade,
of Exclusive Genetics, for his time and knowledge of bull husbandry; Cindy Rosser,
who gave me insight into the life of a stock contractor; and Joe Scully, for the arena
announcer details.

Once written, the book would never have made it out of the drawer but for Sue Grimshaw,
who was supportive even after being stuck two hours in an L.A. traffic jam with an
aspiring author (so sorry). Thanks to my agent, Nalini Akolekar, of Spencerhill Associates,
for taking a chance on me, and to Latoya Smith, my Grand Central editor.

To my mother-in-law, Edith, who is a shining example of how amazing a ranch wife and
mother can be.

And always, to my very own hero—my bleed-maroon Texas Aggie, who always believed.

The grief counselor told the group to be grateful for what they had left. After lots
of considering, Charla Rae decided she was grateful for the bull semen.

C
harla Rae Denny wiped her hands with her apron and stepped back, surveying the shelves
of her pantry. This month’s
Good Housekeeping
suggested using scraps of linoleum as shelf paper. It had been a bitch-kitty to cut
but cost nothing, would be easy to clean, and continued the white-pebbled theme of
her kitchen floor. And for a few hours, the project had rescued her weary mind from
a hamster-wheel of regret.

The homing beacon in the Valium bottle next to the sink tugged at her insides.

She sipped a glass of water to avoid reaching for it and glanced out the window to
the spring-skeletal trees of the backyard.

Her gaze returned to the two-foot-wide stump the way a tongue wanders to a missing
tooth. Tentative grass shoots had sprung up to obscure the obscene scar in the soil.

She hadn’t thought that an innocent tree could kill a child.

She hadn’t thought that an innocent coed could kill a marriage.

And if those pills could kill the thinking, she’d take ten.

At the familiar throaty growl of a Peterbilt turning off the road out front, Char
jerked, realizing minutes had passed. She’d been listening for that deep throb for
hours. She always did. As the cab and empty cattle hauler swept by the window, she
wound her shaking hands in her apron, as if the sturdy cotton would hold her together.

A ranch wife could stretch a pound of hamburger farther than anyone, but Daddy’s new
medication cost the moon, and the bills in the basket beside the computer were piling
up like snowdrifts in a blizzard. Hands still shaking, she untied the bibbed apron
and pulled it over her head. She’d rather clean bathrooms at the airport than ask
her ex for money, but, then, most of her choices these days were like that. Sighing,
she walked to the mudroom, shrugged into her spring jacket, yanked open the back door,
and stepped into the nippy air.

Jimmy had backed the rig to the corral and left the engine running. He stepped down
from the cab to stand, one foot on the running board, looking up into the dim interior,
unaware of her approach. After all, the past four months she’d made sure that when
he was here, she’d been purposely somewhere else.

He looked different. Her Jimmy, but with an older man superimposed, blurring the strong,
familiar lines of the body she knew like her own. The mean midday sun highlighted
the deep furrows bracketing his mouth and
the brown hair curling from under his cowboy hat glinted with silver. His legs were
still long and lean, but a bit of spare tire sheltered his huge oval belt buckle.
Jimmy wouldn’t go anywhere without his State Champion Bull Rider buckle.

She halted ten feet from the truck, thrust her fists in the pockets of the jacket,
and forced words past the ball wedged in her throat. “Jimmy, we need to talk.”

His head jerked around, face frozen in guilty shock. He looked like Benje as a toddler,
caught misbehaving. Yet another reason she’d avoided him was stamped in the features
he’d passed to their son.

He spun back to the cab and mumbled. She followed his line of vision to catch a quick
flash of sun on bleached blond hair. Charla stopped, stunned to stillness. She’d doubt
her vision if that flash of blond hadn’t burned in her mind like a smoking brand.

“You brought her here, Jimmy?” she whispered. “To our—to
my
home?” Oh, sure, she’d known about the Cupcake. The whole town knew. The girl was
the straw that had finished off their marriage.

Jimmy slammed the truck door and stood before it like a challenging bull. “That’s
not Jess, Charla. Jess and I broke up months ago. That’s Mitzi, Jess’s roommate. And
before you get any wrong ideas, I’m taking her to the event to watch her boyfriend
ride. That’s it.”

“Do you think I’m stupid? Lies like that only work once, Jimmy.”

He ducked his head, strode the length of the trailer, and busied himself letting down
the tailgate. She stalked him, anger advancing with every step.

“Do you have that little respect for me?” The pleading
in her voice only made her madder. “James Benton Denny. You
look
at me.”

Hands busy, he shot her his I-may-be-wrong-but-I’m-not-admitting-anything look.

Words piled into her throat, and she swallowed. “Aren’t you even embarrassed? She
could be your daughter, for cripes’ sake. People are laughing their heads off—at you—at
me.” Her traitorous voice cracked.

“Look, I’m telling you the truth, okay?” Jimmy’s voice echoed as he climbed into the
cattle trailer. “The morning has been a disaster. First, that useless Emilio didn’t
show, and I had to fire him.” The empty metal box amplified his sigh. “I needed to
let him go anyway. We’re making good money, but now the business has to support two
households—” He hesitated, apparently recalling his audience.

“Then we had a flat on that danged retread. I knew better than to buy tires from Baynard’s.”
Eyes down, he scanned the metal floor of the truck bed for anything that could hurt
the stock. “I’m seriously late here, Little Bit, can we—”

“Don’t you dare call me that!” She charged up the tailgate, her face blazing. “You
lost that right two months, two weeks, four days ago.”

He trotted by without a word, to the corral. The bulls, who had been watching the
proceedings with interest, sauntered to the trailer. Realizing she stood between them
and their destination, Char jumped from the tailgate.

Jimmy circled the pen, keeping a wary eye on the bulls, urging them gently toward
the gate. “What did you want to talk to me about, Char?”

Slivers of pain shot up her palms. Realizing what she
was doing, she relaxed her fingers until her nails popped out of the skin.
God, I’m a fool.
“Never mind.”

“I’ll be at the event in Abilene for the week.”

Char stepped to the side of the corral to hear over the clatter of hooves on the metal
tailgate.

“I’ve deposited the money from the last semen sale into your account, and I’m dropping
the bulls off at the vet to have more collected on the return trip. I should be back
with them sometime on the twenty-fifth.”

After the last bull, Kid Charlemagne, trotted up the ramp, Jimmy hoisted the tailgate
and shot the pins into place. His nonchalance stung more than his hubris.
Just another day dealing with the unreasonable ex.
Her odd, out-of-body objectivity kicked in again as Jimmy closed the corral gate.
Why shouldn’t he brush her off? What was she but an old coffee stain on his Important
Life?

He still had a job, two of them, in fact. One, working as an arena announcer for the
pro bull riding circuit and the other as a stock contractor, supplying bucking bulls
for the events.

Her only job ended the day Benje died.

Jimmy halted in front of her, his gaze sharpening on her face. “You still taking those
pills, Little Bit?” His brow creased like it did when he was considering, and the
look in his eye softened to… pity? “You’ve gotta get off those things, Hon. Medicating
your life won’t make it better.”

Instead, she held her ground, stabbing a finger at the trailer. “Those bulls have
nothing on
you
in the balls department. You’ve got no talking room, Jimmy. Your old life fell apart,
so you just threw it away and started a
new one.
Your
medication just leans toward blonde and brainless.”

Delicious flames licked the inside of her skin, urging her on. “Well, then, you go
on and lie in that bed, Jimmy Denny. I don’t want to see your face on this property
again. Do you hear me?”

“You can’t do that, Char. You may own the semen, but I own the bulls. The land—”

“Is my daddy’s. His Alzheimer’s hasn’t changed that, and I have his power of attorney.”
The freed flames roared in her ears, and her body shook with righteous crackling heat.
“You know very well I can do this, and by God, if you show up here again, I’ll call
Sheriff Sloan and have you arrested for trespassing.”

She crossed her arms over her chest and wished looks really could kill. “Just leave
the rig at the vet. I’ll pick up the bulls.”

She tipped her chin to the truck cab. “You’d better hurry, Jimmy. Your girlfriend
is waiting.” Spinning on her heel, Charla stomped stiff-legged to the house, mortification,
anger, and fear roiling in her gut.

Giving the door a satisfying slam, she strode to the kitchen, to the fire extinguisher
disguised as a prescription bottle.

Reality is the leading cause of stress for those in touch with it.

A
blast of warm air hit JB as he hauled himself into the cab and slammed the door.
“I apologize for that.” Vibration from the idling engine throbbed through the seat
as he raised his fingers to the heating vents.
Just my luck. The day I do a favor for someone, Little Bit decides she wants to talk.

Saltwater Cowboys by Dayle Furlong
Becoming Josephine by Heather Webb
Society Girls: Rhieve by Crystal Perkins
Bay of Secrets by Rosanna Ley
At First Sight by Catherine Hapka
Bound for Canaan by Fergus Bordewich
Ivy and Bean Bound to Be Bad by Annie Barrows
Random Acts Of Crazy by Kent, Julia
Stormfire by Christine Monson
The Road to Pemberley by Marsha Altman