Read The Sword of Darrow Online

The Sword of Darrow 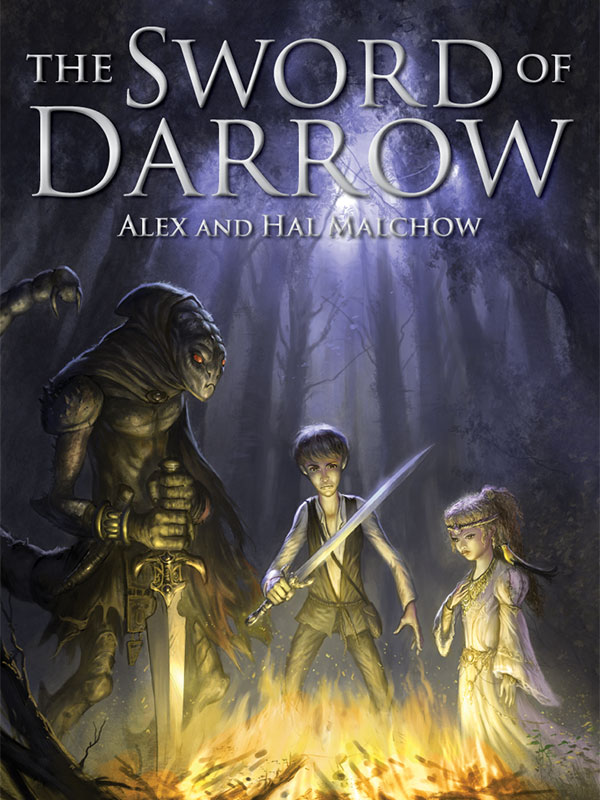 This book is a work of fiction. Names, characters, places, and incidents are the product of the authors' imaginations and are used fictitiously. Any resemblance to actual events, locales, or persons, living or dead, is coincidental.

Copyright © 2011 by Alex and Hal Malchow

Library of Congress Cataloging-in-Publication Data is available for this title.

The Sword of Darrow
is part of the BenBella Cause line, which publishes great books associated with great causes. BenBella will donate a portion of its profits, and the authors will donate all royalties on this title to charities serving those with learning differences.

BenBella Books has also published a separate hardcover edition of
The Sword of Darrow
that has been formatted for easier reading for persons with learning differences. Both editions use phrase-based formatting, a scientifically developed approach to layout and spacing developed by ReadSmart. Phrase-based formatting benefits all readers.

Aisling:
A girl of sixteen who joins Darrow’s band in the forest and who, in battle, hurls stones from her sling.

Asterux:
Wizard who lives in Hexanwald Forest and taught Babette her magic and helps Darrow free the prisoners from the goblin prison. Darrow’s uncle.

Babette:
Eccentric little princess who struggles to read. She escapes from the palace the night that the goblins invade and learns magic from Asterux in the forest. See: Sesha.

Bekkendoth:
Advisor to the king of the goblin nation.

Beltar:
Great goblin general who leads the army of Globenwald.

Cebular:
Mythical figure who was expelled from paradise and founded the goblin race.

Cedrick:
Dwarf who joins Darrow’s band in the forest and writes the songs sung by Darrow’s men.

Darrow:
Boy from the tiny village of Ael who is small and lame but speaks with beautiful words. Darrow seeks to form an army to free his kingdom from goblin rule.

Decidus:
General who commands the goblin army in the battle of Kelsner’s Plain.

Groompus:
Darrow’s old teacher in the tiny village of Ael.

Haidus:
Mayor of Kelofel, the first village that Darrow’s army visits upon leaving the forest.

Hugga Hugga:
Minotaur warrior who is loved throughout Sonnencrest. Hugga Hugga was freed by Darrow and Asterux from the goblin prison and became one of Darrow’s first recruits. Also known as Hugarious.

Kaylin:
A soldier of fortune who joins Darrow’s band in the forest.

Kilgo:
Locksmith and amateur magician who joins Darrow’s army in the forest.

King Henry:
King of Sonnencrest and the father of Princess Babette.

Qunderfill:
The old hermit who lived in the forest. His cabin was the hideout for Darrow and his early band.

Scodo:
Scorpion man who befriends Sesha (Princess Babette) in the forest. Scodo hideous appearance is a result of Zindown’s curse. He is the greatest warrior Sonnencrest has ever seen.

Sesha:
Upon arriving in the forest, Asterux the wizard changes the identity of Princess Babette to Sesha, the ugly gypsy girl. See: Babette.

Sir Fenn:
Knight who helped found the kingdom of Sonnencrest and brought peace between the minotaurs and humans.

Thor:
Old dwarf and blacksmith who provides a home for Babette after she escapes from the palace.

Timwee:
Dwarf warrior who Darrow and Asterux rescue from the dungeon. He and Hugga Hugga are the first members of Darrow’s band.

E
vil. Within this simple word lies a vast collection of deeds.

Many evils are the work of people driven to madness by love or strong beliefs. And for these, there can be pity.

But what of evil inspired by greed alone? What of those who would steal, use violence, or even kill for nothing more than earthly treasure?

If such a person holds a low place in your heart, then consider a man—if you could call him that—who would launch a war, sending thousands to their graves with many more dire consequences to follow, all for a few small boxes of precious stone.

And if the very thought of such a person makes you recoil in revulsion, unable even to consider what good deeds might yet follow, then close this book and return it to its shelf.

For it is with just such an evil that our story begins.

In the village of Fildencroft, in the great goblin kingdom of Globenwald, a thin, bony man stood pressed against a cold stone wall.
His black hair was greasy and lay flat against his pale skin. On his chin sprouted a pointed beard that was crooked and thin, with white gaps revealing the skin beneath. His gleaming black eyes signaled a dastardly mind.

His name was Telsinore and he was the captain of a band of brigands that were known as the Tarantula Pirates. The Tarantula Pirates sailed the
Trap Door
, a small vessel with large sails that transported the band of thieves and murderers with terrifying speed.

He rubbed a bony finger beneath his nose and peered through the window of a house. What he saw made him tremble with delight. Inside, asleep, lay a very large goblin, who was Telsinore’s target. A dangerous target to be sure, for goblins were by their nature a violent and vengeful breed who sent ordinary humans scrambling for cover, and pirates fleeing for the safety of the waves.

Twice, Telsinore had tried to kill his victim and twice he had failed. Tonight, success lay mere footsteps away. Tonight, he would kill the great goblin Rildon, the tax collector and best friend of the goblin king, Malmut II. Telsinore would cleverly lay the blame on Sonnencrest, a tiny kingdom across the river from the goblin kingdom. The death of Rildon would surely be avenged. The massive goblin army would immediately march against their weaker and peaceful foe.

And when the goblin soldiers invaded Sonnencrest, a great treasure would lay unguarded. The emerald mine. The richest in the world. And the emeralds he would steal would buy Telsinore a great prize. They would buy the death of his rival, the great pirate Three Fingers Frick.

Telsinore hatched his plan, he had expected to make quick work of the tax collector, and for good reason. Rildon was fat—so fat that walking was entirely out of the question. Instead, he waddled, slowly and ponderously, at a pace that would embarrass a snail. Why was he fat? Because he ate many times a day, consuming staggering quantities of food. All day, the royal cooks would slave over their pots, concocting all kinds of stews and puddings and casseroles. Hour after hour, Rildon would eat. And hour after hour, Rildon would cry out for more.

Next to eating, Rildon had one other pastime: sleeping. Morning naps. Afternoon naps. Long evening slumbers. When he slept, it was well known to all, for he announced his sleeping with a thunderous snore that rattled nearby buildings and drove birds from the trees.

Telsinore’s original plan was simple. Under the cover of darkness, he scaled the wall and sneaked into Rildon’s bedroom. Lifting the bedcovers, he placed two things on the sheets. One was a note, placing the blame for Rildon’s death on the small, peace-loving kingdom of Sonnencrest.

The other was Trixie, Telsinore’s poisonous spider.

But when Rildon arrived in his bedroom, it was not the tax collector who perished. For as Rildon collapsed into bed, his great weight crashing into the mattress, Trixie was crushed, and her insides splattered across the note, making it impossible to read. All that remained was a great black spot that Rildon didn’t notice.

But there was no time for Telsinore to mourn his beloved pet. He had a job to do. To accomplish his mission, he next chose a simpler method: a bow and arrow.

For Telsinore, the bow was an odd choice. He was a pirate, a man of the sword. Archers were sissies. His skills might be unpracticed, but how could he miss? Rildon was huge! So, in a tree overlooking the compound wall, Telsinore waited. When he saw his target, he pulled far back on the string and sighted the arrow at Rildon’s heart. Unfortunately, the arrow sailed well above Rildon, through a window, and into the heart of Sindbad, the king’s beloved moondust bird.

Rildon suspected nothing. But the royal archery instructor was never seen again.

Was Telsinore discouraged? Not one bit.

Two days later, a hooded messenger appeared at the compound door. He delivered an invitation from the goblin town of Fildencroft. A great pig roast would be held in honor of Rildon, the royal tax collector and King Malmut’s closest friend. Rildon made immediate plans to attend.

On the day of the banquet, the goblins mounted their horses for the journey. Rildon, too large for the carriage, was lifted into an open wagon for the trip.

But when they arrived in Fildencroft, there was no dinner to be had. The confused goblins knew nothing of the invitation. They became anxious, fearing to offend Rildon, who would surely demand new taxes from their village.

Finding Rildon was no problem. In the town square, covered by a hooded cloak, Telsinore sat and listened. When he heard Rildon’s great snore echoing through the streets, he followed the sound to the inn where Rildon had passed out.

Now here he was, pressed against the wall, ready for his third attempt on Rildon’s life. The window was open. Telsinore crept inside.

Rildon’s massive body trembled and shook with each thunderous snore. Reaching into his bag, Telsinore pulled out a poisoned arrow. The arrow was marked with a yellow sun, the symbol of the kingdom of Sonnencrest.

Taking no chances, he shoved the poisoned arrow directly into Rildon’s heart. After a few muddled snorts, silence filled the room.

Telesinore’s plan was complete. The emeralds would be his and his rival would lie at the bottom of the sea. He smiled at the brilliance of his plan.

“That was so easy,” he chuckled, “it was almost a crime.”

The next morning, the royal guests found Rildon, his unmoving eyes fixed on the ceiling, the arrow deep in his chest. Attached to the arrow was a note. It read:

Trespassing on the land of Sonnencrest will not be forgiven. Let this be a warning.