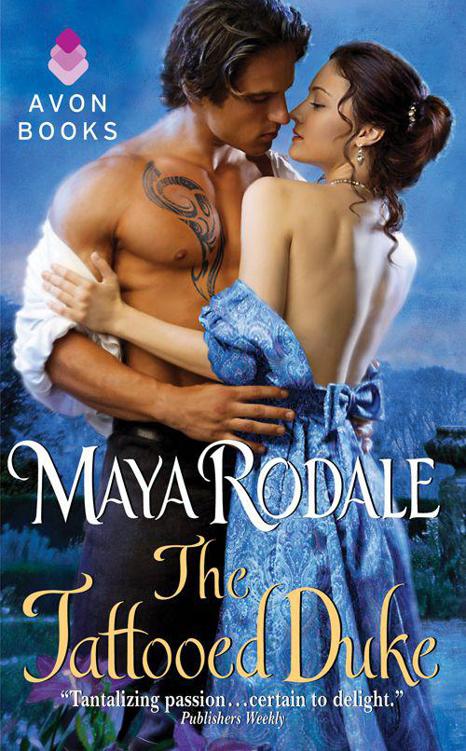 For my friends at the Rodale Institute.
I miss y’all, but Timbuktu was calling.

my very own
long-haired, pierced, and tattooed duke

T
hey said he had been a pirate. It seemed utterly believable. The other rumors about Sebastian Digby, the Duke of Wycliff, were equally riveting. It was said that he had charmed and seduced his way across countries and continents; that there existed no law or woman he couldn’t bend to suit his whims; that he had lived among the natives in Tahiti and swam utterly nude in the clear turquoise waters; that he had escaped the dankest of prisons and thoroughly enjoyed himself in a sultan’s harem.

A gentleman he clearly was not.

And now this charming, adventurous, scandalous duke had returned home, to London.

Miss Eliza Fielding had joined the throngs on the dock to witness the long-awaited return of this duke, as per the orders of her employer, Mr. Derek Knightly. She wrote for the monstrously popular newspaper he owned and edited,
The London Weekly
. In fact, she was one of the four infamous Writing Girls who wrote for the paper. For the moment, at any rate.

Eliza tugged her bonnet lower across her brow to protect against the light drizzle falling and dug her hands into the pockets of her coat.

“If you don’t get this story,” Mr. Knightly had told her plainly as she stood in his Fleet Street office just yesterday, “I can no longer employ you as a writer for
The London Weekly
. I cannot justify it if you are not submitting publishable works.”

It was perfectly logical. It was only business. And yet it felt like a lover’s betrayal.

Knightly didn’t need to say that she hadn’t been turning in any decent stories—they both knew it. Weeks had turned into months, and not one article of hers appeared in its pages.

Oh, she used to write the most marvelous stories—a week in the workhouse undercover to expose the wretched conditions, exclusive interviews with Newgate prisoners condemned to death, detailing the goings-on in a brothel to show what the lives of prostitutes were really like. If there was a truth in need of light, Eliza was up to the task. If adventure, danger, and the dark side of London were involved, so much the better.

Lately she hadn’t been inspired. The words wouldn’t come. Hours, she spent with a quill in hand, dripping splotches of ink of a blank sheet of paper.

Knightly’s assignment was plain: to uncover every last secret of the Duke of Wycliff. All of London was panting for the intimate details of his ten years abroad. It wasn’t
just
that he was a duke—and the latest in the long line of “Wicked Wycliffs,” as the family was known. That alone would have required column inches of ink. But all those rumors . . .

Had he really been a pirate? Was it true about the harem? Had he been made the chief of a small tribe on a remote island in Polynesia? What of mountains scaled, fires started, and lands explored? More importantly to the ton, was he looking for a wife?

The questions were plentiful. The answers were hers to discover. But how?

“But how?” she asked Knightly. “He’s a duke and I am quite far from that. We don’t exactly move in the same circles.”

“Do you not want this story?” Knightly asked impatiently. She saw him glance at the stack of papers on his desk awaiting his attention.

“Oh, I do,” Eliza said passionately. It wasn’t the money—Knightly’s wages were fair, but not extravagant. There was something about being a Writing Girl: the true friendship, the thrill of pushing the boundaries of what a woman could do in this day and age, the love of chasing a great story and the pleasure of writing, excruciating as it occasionally could be.

She made a living by her own wits, dignity intact, and she was beholden to no one. She would not give that up lightly.

“Figure something out,” Knightly told her. “Become his mistress. Bribe his staff. Or better yet, disguise yourself as one of the housemaids. I care not,
but get this damned story
.”

Knightly didn’t need to say “or else!” or bandy about idle threats to make his point. The truth was there, clear as day: this was her last chance to write something great or there would only be three Writing Girls.

Thus, she was now here, on the docks along with a mob of Londoners vying to see this long-lost pirate duke. All manner of curiosities were hauled off the ship: exotic creatures, exquisite blossoms and plants, dozens of battered crates with words like
Danger
or
Fragile
or
Incendiary
branded on the boards.

Interesting, to be sure, but nothing compared to the man himself.

Everything about him would cause a scandal.

Then she saw him.

His dark hair was unfashionably long, brushing his shoulders and pulled back in a queue save for some windswept strands that whipped around his sharply slanting cheeks.

His skin was still sun-browned. A tantalizing patch exposed at the nape of his neck—which a gentleman would have covered—begged one to wonder how much of his skin had been exposed to the sultry tropical sun. Had he stripped down to his breeches, baring his chest? Or had the lot of his clothing been deemed too restrictive and discarded?

He wore no cravat at his neck; instead, buttons were left undone on his linen shirt, offering a glimpse of the bare skin of his chest. His gray jacket was worn carelessly opened, as if he did not even notice the drizzling rain.

When he moved, one might catch a glimpse of a sword hanging at his side. One would be wise to assume he carried a knife in his boot or a pistol in his coat pocket.

Even on this damp afternoon, Eliza felt like her nerves were smoldering, sparked by equal parts excitement and fear. It was the feeling she always had at the start of a mission, but this time there was something else.

Two men, garbed in dark, rough coats next to her in the crowd began a conversation that Eliza freely eavesdropped on as she kept her gazed fixed upon her quarry. She leaned in, the better to listen to their gruff voices.

“I heard that his household is looking to hire, but chits aren’t exactly lining up for the job. I know I told my sister under no circumstances was she to take a job there, duke’s household or not.”

“Aye? Why is that?” This man’s posture and tone said he thought it stupid to refuse a job, particularly from a duke.

“Everyone knows the Wicked Wycliffs like to tup their housemaids and then send ’em packing when they’re with child,” the other said authoritatively. She wondered where he’d heard gossip like that. Probably from
The London Weekly.

“More than usual?” the man said, thus pointing out that this was hardly unusual behavior.

“Aye, they’re legendary for it. They don’t call ’em the Wicked Wycliffs for nothing. And this one, particularly—look at him. Would you want yer sister or your missus working under the same roof as him?”

In unison the three fixed their attention on the duke. He boldly paced the ship’s deck with determined strides, coat thrown open to the elements and white shirt now wet and plastered across his wide, flat chest and abdomen. Heat infused Eliza’s cheeks and . . . elsewhere.

The duke paused to converse with a rough-looking man with one arm in a sling and one eye covered by a black patch. The very definition of disreputable company.

The duke turned to give an order to the crew as they carried off precious cargo. Eliza knew that he was not captain of the ship, but lud, if he didn’t act like he was the lord and master of everything around him.

To say the duke was handsome did not do it justice—even from the distance she viewed him at. He was utterly captivating. Danger, indeed.

“No,” the man next to her said. “I wouldn’t want any of my womenfolk gettin’ near the likes of that.”

Eliza smiled, because she would dare to get close. She thought again of Knightly’s flippant, impatient words:
Or better yet, disguise yourself as one of the housemaids.

Her heart pounded as she pieced that together with the gossip she had shamelessly overheard:
I heard that his household is looking to hire, but chits aren’t exactly lining up for the job.

Shivers of excitement. The thrill of the chase. Her job on the line.

On the spot, she made a decision. In order to save her position as one of
The London Weekly
’s Writing Girls, she would disguise herself as a maid in the household of the scandalous, wicked Duke of Wycliff.

The very next day, wearing a plain dress and with fake letters of reference from her fellow Writing Girls, the Duchess of Brandon and the Countess Roxbury, Eliza found herself at work in Wycliff House—dusting the library bookshelves, in particular, while His Grace entertained a caller—where she would have unfettered access to the duke, his household, and his secrets . . . and to the shocking story she needed in order to remain a writer at
The London Weekly.

Now You See Me by Rachel Carrington
Truth or Demon by Kathy Love
Thirst by Ken Kalfus
Death of an Addict by Beaton, M.C.
Quid Pro Quo by Rivera, Roxie
Diamond Star by Catherine Asaro
The Eskimo Invasion by Hayden Howard
Casanova In Training by Aliyah Burke
The Waffler by Gail Donovan
Something in the Heir (It's Reigning Men, #1) by Jenny Gardiner