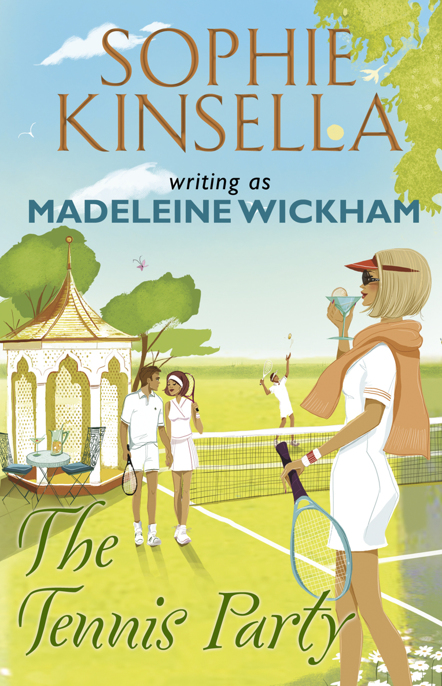 It was Patrick's idea that they should have the tennis party weekend. After all, he has the perfect setting – the White House. Bought out of his bonuses as an investment salesman, it comes complete with stable, cocktail bar, and, of course, the tennis court (towered over by an authentic Wimbledon-green umpire's chair).

He hasn't actually told Caroline, his brash and beautiful wife, what the real reason for the party is. She is glad to welcome Stephen and Annie, their impoverished former neighbours, less glad to see newly wealthy Charles and his aristocratic wife Cressida, and barely able to tolerate the deadly competitive Don and Valerie.

As the four couples gather on the sunny terrace, it seems obvious who are life’s winners and losers. But as the first ball is served over the net it signals the start of two days of tempers, shocks, revelations, the arrival of an uninvited guest, and the realization that the weekend is about anything but tennis.

Madeleine Wickham
was born in London and published her first novel,
The Tennis Party
, while working as a financial journalist. Under the name of Sophie Kinsella she is the author of many number one bestselling novels including the
Shopaholic
series, now filmed as Confessions of a Shopaholic. She lives in London with her husband and children.

For more information on Sophie Kinsella and her books, visit her website at
www.sophiekinsella.co.uk

You can also join Sophie on her official Facebook fan page at
www.facebook.com/SophieKinsellaOfficial

CAN YOU KEEP A SECRET?

Madeleine Wickham has asserted her right under the Copyright, Designs and Patents Act 1988 to be identified as the author of this work.

This book is a work of fiction and, except in the case of historical fact, any resemblance to actual persons, living or dead, is purely coincidental.

This book is sold subject to the condition that it shall not, by way of trade or otherwise, be lent, resold, hired out, or otherwise circulated without the publisher’s prior consent in any form of binding or cover other than that in which it is published and without a similar condition, including this condition, being imposed on the subsequent purchaser.

Addresses for Random House Group Ltd companies outside the UK can be found at:
www.randomhouse.co.uk

For my parents,
David and Patricia Townley

I would like to thank Araminta Whitley,
Sally Gaminara and Diane Pearson,
and above all,
Henry Wickham

It was the sort of warm, scented evening that Caroline Chance associated with holidays in Greece; with glasses of ouzo and flirtatious waiters and the feel of cool cotton against burnt shoulders. Except that the sweet smell wafting through the air was not olive groves, but freshly mown English grass. And the sound in the distance was not the sea, but Georgina’s riding instructor, intoning – always with the same monotonous inflection – ‘Trot
on
. Trot
on
.’

Caroline grimaced and resumed painting her toenails. She didn’t object to her daughter’s passion for riding – but neither did she comprehend it. The moment they had moved to Bindon from Seymour Road, Georgina had started clamouring for a pony. And, of course, Patrick had insisted she should be given one.

In fact, Caroline had grown quite fond of the first pony. It was a sweet little thing, with a shaggy mane
and a docile manner. Caroline had sometimes gone to look at it when no-one was about and had taken to feeding it Ferrero Rocher chocolates. But this latest creature was a monster – a huge great black thing that looked quite wild. At eleven, Georgina was tall and strong, but Caroline couldn’t understand how she could even get onto the thing, let alone ride it and go over jumps.

She finished painting her right foot and took a slug of white wine. Her left foot was dry, and she lifted it up to admire the pearly colour in the evening light. She was sitting on the wide terrace outside the main drawing-room of the house. The White House had been built – rather stupidly, Caroline felt, given the English climate – as a suntrap. The stark white walls reflected the sun into the central courtyard, and the main rooms faced south. A vine bearing rather bitter grapes had been persuaded to creep along the wall above Caroline’s head; and several exotic plants were brought out of the greenhouse every summer to adorn the terrace. But it was still bloody freezing England. There wasn’t much they could do about that.

Today, though, she had to concede, had been about as perfect as it could get. Translucent blue sky; scorching sun; not a gust of wind. She had spent most of the day getting ready for tomorrow, but luckily the
tasks she had allotted herself – arranging flowers, preparing vegetables, waxing her legs – were the sort of thing that could be done outside. The main dishes – vegetable terrine for lunch; seafood tartlets for dinner – had arrived from the caterers that morning, and Mrs Finch had already decanted them onto serving plates. She had raised an eyebrow –
couldn’t you even bring yourself to cook for eight people?
– but Caroline was used to Mrs Finch’s upwardly mobile eyebrows and ignored them. For Christ’s sake, she thought, pouring herself another glass of wine, what was the point of having money and not spending it?

The riding lesson was over and Georgina came bounding across the lawn, long blond rivers of recently plaited hair streaming down her back.

‘Mummy,’ she called, ‘Dawn said my rising trot was more controlled than it’s ever been! She said if I ride like that in the East Silchester gymkhana . . .’ She looked impressively at Caroline. Then what? thought Caroline. Then you’ll win? Then you’d better give up? She had no idea whether a rising trot was supposed to be controlled or utterly abandoned. ‘
And
my jumping’s getting better,’ added Georgina.

‘Oh good, darling,’ said Caroline. Her voice was husky, roughened by cigarettes and, lately, a bottle of white wine nearly every evening.

‘Nail varnish,’ said Georgina. ‘Can I put some on?’

‘Not on those filthy nails,’ said Caroline. ‘You need a bath.’

‘I haven’t got any bright pink,’ said Caroline, wrinkling her nose. ‘You can have this pretty pale pink or red.’

‘Red, urggh.’ Georgina pulled a face. Then she jumped up onto the terrace and swung on the back of Caroline’s beechwood chair. ‘Who’s coming tomorrow?’

‘Is she better yet?’

‘Shall I take her riding? Is she allowed?’

‘You’ll have to ask Annie. I don’t see why not. But make sure you take Toby, too.’

‘He’s too little to go on Arabia.’

‘Can I be in the tennis tournament?’

‘Can I wear my tennis skirt?’

‘You can if you want,’ said Caroline, ‘but you’ll get bored.’

‘No I won’t,’ said Georgina. ‘I know how to do it. You roll the balls along the line and then you hold them up and throw them to the people playing. Poppy Wharton’s cousin was a ballgirl in Wimbledon, and she saw Navratilova. I can serve overhead, too.’

She threw up an imaginary ball and took a swipe at it, bumping into Caroline’s chair as she did so. The nail varnish brush smudged.

‘No-one’s going to see your feet, anyway,’ said Georgina. ‘Will you put some on my fingers?’

‘After your bath. You need clean nails. Yours are all horsy.’ But Georgina had lost interest and was doing a handspring on the lawn. Caroline, who had once trained as a gymnast herself, looked up. They didn’t teach them to finish off properly any more, she thought; to land neatly and present to the judges with a pretty smile. At Georgina’s boarding-school, no-one took gymnastics seriously. They did it to strengthen the girls for more important pursuits – netball, lacrosse, and always the horses. None of them seemed interested in competitions, show routines, shiny leotards and ribbons – the stuff of which Caroline’s childhood had been made.

Patrick Chance, walking up to the house from the tennis court, saw his beautiful, agile daughter turning cartwheels against the setting sun, and stopped for a moment, taking in her effortless grace, her vitality and energy. Was every father as sentimental as he? He found it difficult, talking to other parents, to emulate their easy nonchalance. Whereas they shrugged off their children’s achievements, he could not resist cataloguing Georgina’s; could never resist breaking off in conversation to point out that his daughter had just gone into the ring, yes, competing in the under fourteens, even though she was only just eleven. When the other parents nodded, smiling, and turned back to their chatter, his heart would beat with suppressed rage and incomprehension. But look at her! he always wanted to cry. Just look at her! She plays the piano, too, he would say, desperate to win back their attention. Coming on very well, her teacher says. We thought we might try her on the flute.

Caroline, he noticed, had turned her attention back to her nail polish. It still pained him that she didn’t share his fervent appreciation of Georgina – and refused to join in when he began to eulogize about her, even when they were together on their own. Particularly because, to be fair, there was a lot more in Georgina that Caroline could claim as her
own than he could. Mother and daughter shared their blond hair, their athletic frames, their tendency to burst into raucous laughter. But perhaps that was why Caroline was so blasé about Georgina. She was used to beauty, physical accomplishment and popularity. Whereas Patrick, short, stumpy and short-sighted, was not.