Read The Tetherballs of Bougainville: A Novel (Vintage Contemporaries) Online

The Tetherballs of Bougainville: A Novel (Vintage Contemporaries) 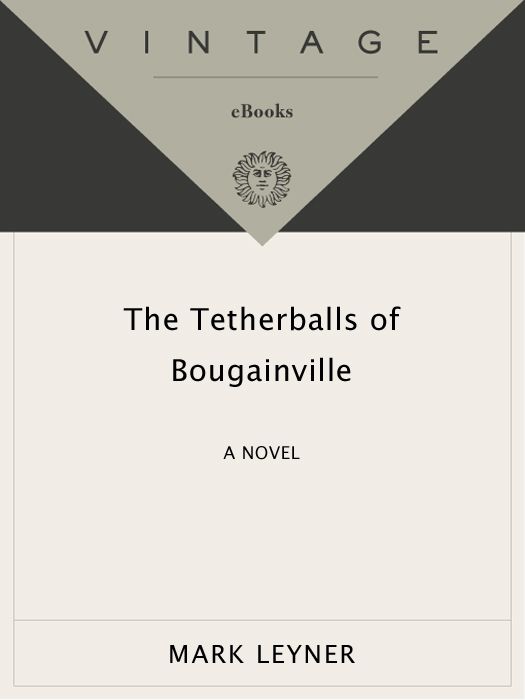 “Leyner is … the most hilarious writer alive. I found it truly impossible to read any five pages of this book without whooping and wheezing and laughing until my stomach hurt.”

“His most scathing novel to date, a masterpiece of concentrated disgust and madcap ridicule … distinguished by his indefatigable ability to squash the detritus of high and low culture into quantum packets of pristine wordplay.”

“Leyner … can be amusing to the point where it seems almost sadistic.”

“Scorching satire … hilarious, torqued variants of the shared experience of living in the present day, creating brilliant histories behind seemingly empty artifacts. This book is an immense pleasure to read.”

“A pleasure to read … [Leyner] creates dazzlingly unique situations and knows how to mine them for their comic ore.”

I Smell Esther Williams
My Cousin, My Gastroenterologist
Et Tu, Babe
Tooth Imprints on a Corn Dog
The Tetherballs of Bougainville

Mark Leyner is the author of the novel
Et Tu, Babe;
two collections of stories,
I Smell Esther Williams
and
My Cousin, My Gastroenterologist;
and a collection of fiction, plays, and journalism,
Tooth Imprints on a Corn Dog
. He writes a monthly column, “Wild Kingdom,” for
Esquire
magazine. His work has also appeared in
The New Yorker, The New Republic, George
, and
Harper’s
. He lives in Hoboken, New Jersey, with his wife, Mercedes, and daughter, Gabrielle.

All rights reserved under International and Pan-American Copyright Conventions. Published in the United States by Vintage Books, a division of Random House, Inc., New York, and simultaneously in Canada by Random House of Canada Limited, Toronto. Originally published in hardcover in the United States by Harmony Books, a division of Crown Publishers, Inc., New York, in 1997.

International House of Pancakes … Cakes! Stanley. Sure, I help you. Monsters in the vents … I’m at Liz’s. Like my hal-vah? Laura G.
is
fat! Never forget the night Calder fell on you … best Christmas ever! Who’d you rather do: Rusty, Eugene, the guys from Trapani’s, or Goiter Man? Did I kinda neglect to, like, inform you that you’re, uh, my hero? I love ya, hon.

P.S. Yes, the birthday party was a surprise; no, I didn’t steal your coat.

W
hen an astronomer observes a galaxy in some distant realm of the universe, what he is actually seeing is light that has traveled incomprehensibly vast distances over vast periods of time before arriving at the lens of his telescope. In the present, this galaxy may no longer even exist. He is quite literally looking at the past.

Theoretically, if we could travel to a point many light-years from the earth and somehow view the light emanating from our planet with the resolution of, say, a spy satellite—advanced photoreconnaissance spacecraft are capable of reading the washing instructions on a black silk chemisette from 22,300 miles in geosynchronous orbit—we could actually observe ourselves in the past.

But until we can outrace light, until we can set up our hyper-resolution telescope on some planetoid 15, 20, 30 light-years from the earth and—by dint of its optical wizardry—watch our youth unfold, we must make due with our memories, our diaries and notebooks, our videotapes, microcassettes, floppy disks, our photo albums, our evocative souvenirs and bric-a-brac—all the various and sundry madeleines we use to goad our hippocampi into reverse-scan.

With only the crude armamentarium of the memoirist at our disposal, it is impossible to portray the past with anything approaching clinical accuracy. Cognitive neuroscientists frequently use the image of hooded convict-drones pumping pink fiberglass insulation into the attic of a sumptuous mansion whose mistress sprawls below caressing the soft down of her belly with
a riding crop to describe the way we fill the lacunae in our memories with a meringue of utter fabrication. And we invariably litter the mise-en-scène of our past with the cultural props of our present—Mommy staggers to the table at a Pee Wee Football Awards dinner anachronistically accoutered in an Azzedine Alaïa mummy dress, Great-grandpa, five days out of a shtetl in Poland, washes down Pringles with a 40-ounce bottle of St. Ides malt liquor as he waits in line for an eye exam at Ellis Island.

Wary of these pitfalls, I have tried my best—in the following capsules—to provide an accurate chronicle of my past. And I have tried to confront unflinchingly what were once dirty little secrets buried in the databases of government statisticians, but are now acknowledged as the Three Fundamental Sociological Axioms, the demographic triple pillar upon which our culture stands:

As you read on, some of you may experience an eerie shock of recognition. You may bolt upright in bed, murmuring to yourself, “I think I actually
know
this guy.” Some of you may even say,
“Hey, I think I
dated
this guy.” (For female readers who lived in the Dallas-Fort Worth metropolitan area in the mid-eighties—if the droll conversational icebreaker “I’d like to get you real high and eat your pussy for an afternoon” sounds familiar—yes, that was me.)

On the other hand, you may feel as if you’re reading your
own
diary. If you feel dirty and ashamed and yet flushed with arousal as if you’ve been caught in an act of auto-voyeurism, peeping through the bedroom window of your own doppelgänger, or as if you’re intoxicating yourself on your own body’s fumes and detritus, huffing your own halitosis or snorting a line of your own dandruff from the page, because each page is like a mirror, and you’ve literally never seen yourself so closely and the pores of your nose have never seemed so gaping, like rabbit holes, and suddenly there’s that terror of actually falling down one of them, that terror of interminable free-fall … Well, OK, that’s cool, that was my intention. In a sense, I’ve tried to write
your
autobiography. Or perhaps induce you to write mine …

Because what I really want is for you to actually inhabit my body, to get into my musculature and fascia, my limbs and trunk and head, to envelop your brain with my brain. I want you to wear my parka of viscera, to string yourself with my organs like a suicide bomber festooned with explosives. I want you to know what it feels like to walk through a Foodtown encumbered by the twitching heft of my 140 pounds and then to try to read a USDA nutrition label on a can of kipper snacks as your mind thrashes against the vortical undertow of my ghastly memories.

I want you to experience what it’s like to be four years old and summoned to the school neurologist’s office and told that because
of hypertrophic dendrite growth in your brain, your head can no longer be supported by your neck—to be told that it’s like trying to support a bowling ball on a single strand of uncooked angel hair pasta—and to have to wear a specially built cervical flying buttress—a doughnut-shaped base worn around the waist, from which four thick metal flanges rise up to pinion the front, sides, and back of the head. I want you to experience the instantaneousness with which the uproarious din of a Chuck E. Cheese is stilled when you walk in sporting that device. I want you to feel what it’s like to be ten and, while the other kids are frolicking at summer camps in the Berkshires, you’re immured in the recesses of a mildewed hovel, subsisting on cigarettes and black coffee and spending twenty hours a day shooting a perverse misanthropic video version of
Pippi Longstocking
using tiny intricate marionettes made of cockroach carapaces, chicken bones, rat vertebrae pried from traps, discarded condoms, foil ketchup packets—whatever you can scavenge from the garbage-strewn halls. I want you to feel what it’s like to be in postproduction, your editing equipment darkened by the shadow of your huge head. And I want you to feel what it’s like to be suddenly remanded into the custody of a so-called “aunt”—a bushy-haired, pockmarked woman with a lush mustache and tall rounded karakul hat who fills your head with paranoid conspiracies and crackpot theories, including the notion that Jack Ruby didn’t intentionally kill Lee Harvey Oswald, that his death was accidental and occurred as the two had rough sex.

Survivors: Book 4 Circles of Light series by E.M. Sinclair
Stranger At The Wedding by Barbara Hambly
The Whore's Child by Richard Russo
Angel Be Good by Kathy Carmichael
Seducing a Wolf: Moonbound Series, Book Five by Krystal Shannan, Camryn Rhys
Nomad by Ayaan Hirsi Ali
The Curse of the Singing Wolf by Anna Lord
The Prince’s Bride by Julianne MacLean
Pearl by Simon Armitage
The Viceroy of Ouidah by Bruce Chatwin