Read The Tower of Bashan Online

The Tower of Bashan 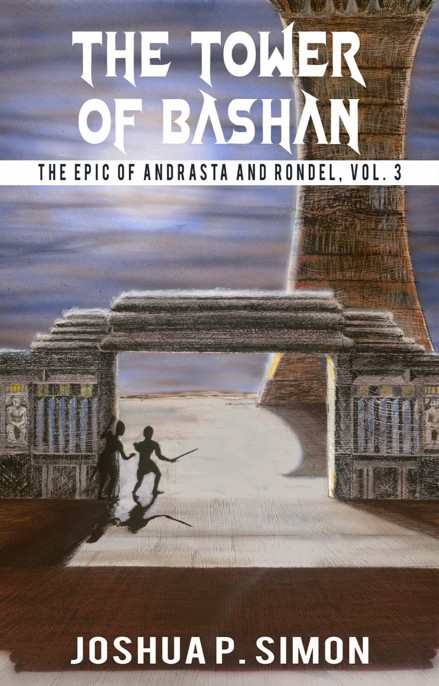 The Tower of Bashan

The Epic of Andrasta and Rondel, Vol. 3

No part of this publication can be reproduced or transmitted in any form or by any means, electronic or mechanical, without permission in writing from Joshua P. Simon.

Visit the author at
joshuapsimon.blogspot.com
.

WORKS AVAILABLE IN THE EPIC OF ANDRASTA AND RONDEL

The City of Pillars, Vol. 2

The Tower of Bashan, Vol. 3

Rise and Fall: Book One of the Blood and Tears Trilogy

Walk Through Fire: A Blood and Tears Prequel Novella

Steel and Sorrow: Book Two of the Blood and Tears Trilogy

Hero of Slaves: A Blood and Tears Novella

Trial and Glory: Book Three of the Blood and Tears Trilogy

EXCERPT OF
FORGOTTEN SOLDIER: THE TYRUS CHRONICLE - BOOK ONE

In the black of night, “the hour of the panther” as it was called in the jungle, Andrasta glided through the dozens of twisting caverns that acted as Master Enzi’s main training ground. Fully armed and armored except for bare feet, she kept her boots strapped to her pack to aid her in maintaining silence.

For years she had honed every fighting skill imaginable in those caverns, the results of which were thick muscles and lightning reflexes. She had earned every scar that adorned her dark skin. Nightmares of the place haunted her dreams. Yet, a persistent tug to remain hounded her as she neared the exit.

She emerged into a starlit night, leaving behind every person she had come in contact with since becoming Enzi’s student.

She froze.
All except one,
she thought.

Master Enzi sat lazily on a nearby boulder. As was his preference, he wore no clothes except for a pair of short, knee-length trousers of tiger skin. He gazed down the mountain side, into the valley below where other training implements and obstacle courses lay hidden beneath the jungle canopy. Though unseen, the rushing sound of the Kango River drowned many of the nighttime sounds of the wild. Andrasta had planned to follow the river into the grass plains near her home.

“You can breathe,” Enzi said without looking back. “I know you’re there. Put your boots on and come here.”

She scowled. She knew she hadn’t made a sound or given off any smell, yet, as usual, he knew not only where she was, but what she was doing. She put on her boots and walked to him.

“I did not give you permission to leave,” he said.

He grunted. “You are no longer a scared and weak little girl, Amani.”

She winced at the use of her birth name.

“I also haven’t been Amani for some time.”

“Then why do you still feel the need to run home to your father like a child?”

“You heard the news. He’s in trouble and I can help.”

“The news is years old. If he truly wanted your help, he would have sent for you.”

Years?
“Why did you hide the information from me?”

“Because if I had told you then, you would have done exactly what you’re doing now. In your first couple years I might not have cared. You were next to useless then, except to motivate the weakest of the boys. But then just when I was ready to give up on you, you finally came around. Then you intrigued me. So, when I learned of the news of your father, I kept it hidden. I had hoped after a couple more years, your wisdom might grow along with your skills. But based on this,” he said apprising her. “I was wrong.”

She shrugged. “I need to leave.”

“No one in your tribe loves you. No one ever has.”

“—was never a part of your tribe. Just as you’ve never been. That is why you wear that scar. No one would have dared to do that to one of your sisters.”

“I still need to leave.”

“I expected you would say as much.”

“You will not be welcomed.”

Her eyes widened. “What?”

“The first rule I gave you is that you leave when I tell you to leave. Not before. Leave without my command, and you will not be allowed back.”

Andrasta clenched her fists. “So be it. I’ve passed every test, won every challenge, and defeated every opponent pitted against me. I’ve learned all I can learn from you.”

“That attitude is exactly why you’re not ready to leave.” He stood, and shooed her away with the back of his hand like a wild dog. “But go. I can see you won’t listen. Face your father and hear his answer. When he tells you no, go be the warrior you think you are. Perhaps you’ll not die before you learn the lessons I hoped to teach you.”

He spun on his heels and disappeared into the cave.

Andrasta paused for a moment, thinking of the torturous life, the veritable hell she had gone through under Enzi’s instruction.

Why do I care what he thinks? He doesn’t care for me.

His niggling voice echoed in her mind.
“My job isn’t to care, but to teach.”

She shook her head, tired of Enzi’s ways. She’d do as she pleased.

Andrasta stood in her father’s throne room waiting for him to appear. Her family, dozens of people, surrounded the perimeter of the room, yet none acknowledged her.

Some things don’t change
. She glanced around the space, ignoring the people and instead studied the throne room itself.
But others do.

Tiny holes from time and neglect pocked the mortar of the gray granite walls. The once vibrantly detailed tapestries that hung from ceiling to floor had begun to fade. Without a thorough knowledge of Juntark’s history, one might have trouble determining the scenes depicted on those wall coverings. Even to her, the Battle of Malindi and the Great Hunt of the Gorgos were almost indistinguishable.

Worse than I feared
.

An outsider might not bat an eye at the aging palace but that was because an outsider did not know her father. The man she remembered would have hired an entire team of masons the moment the first crack in the mortar appeared.

And new carpets, bigger and more grand to replace the old.

Andrasta had never been close to her father. If not for their shared blood, he might have disowned her after her mother’s passing. As his fifth wife, the marriage held no special place in the Dawaro tribe except for the peace it brought to the northern border Juntark shared with Cael.

At least it worked.
She frowned.
The two nations have enjoyed years of peace. All it cost was the happiness of one woman and her daughter.

Neither love nor respect had ever existed between her parents, though she knew her mother, at least, had tried to find both early in their union. The differences in race, religion, and nationalities were just too much to overcome.
Not like he had been a caring man anyway.
Andrasta’s mother thought a child might improve the marriage, but it had only driven her parents further apart.

Not a son, but an addition to a sea of daughters.

The only interest she recalled her father ever showing her mother came when he wanted a night with his “pale bride.”

Andrasta’s hands opened and closed. She took a deep breath. Years had passed, and yet the memories stung as if the events had occurred yesterday.

Spear butts clacked against the floor. Those in attendance stood—aunts, uncles, stepmothers, sisters, and younger brothers finally gained from her father’s eighth wife.

Andrasta had been at her father’s home for the better part of an hour and in the dining hall for half as long. With no one willing to speak with her, one question kept repeating itself in her mind.