Read The Trail of the Screaming Teenager Online

The Trail of the Screaming Teenager 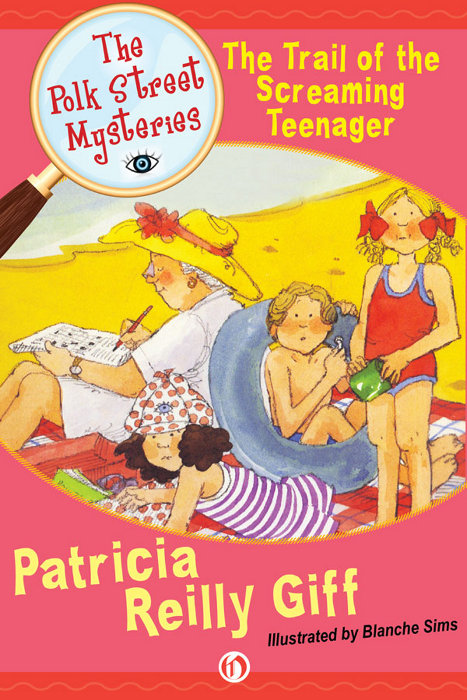 For my Ali, with love

A Biography of Patricia Reilly Giff 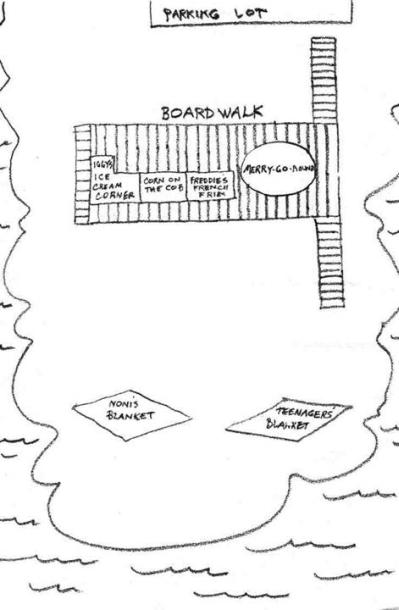 D
AWN
B
OSCO PULLED
out an ice cube tray. She banged it against the sink.

Ice cubes flew all over the counter.

She put one in her mouth.

She put another under her Polka Dot Private Eye hat.

“I can’t stand it,” she told her grandmother, around the ice cube. “It’s too hot.”

“You’re right,” said Noni. She fanned herself with her newspaper. She looked out the screen door. “Even Mr. Ott next door is going to the beach.”

“Mr. Ott in a bathing suit?” said Dawn. “I can’t picture him without his gray suit.”

She stood up high on tiptoes. She stretched her arms out in front of her. “Perfect dive by Dawn Tiffanie Bosco.”

“Hmmm,” said Noni. She rattled her newspaper. Then she nodded. “I’ll call Jason’s mother. Jill Simon’s too. I’ll take everyone.”

“Yahoo,” Dawn yelled. She raced upstairs to her bedroom. She tossed everything out of her dresser.

Her purple-striped bathing suit was in the bottom drawer. It was still a little damp from Emily Arrow’s pool the other day.

She fished around for her sunglasses with the mirror eyes. 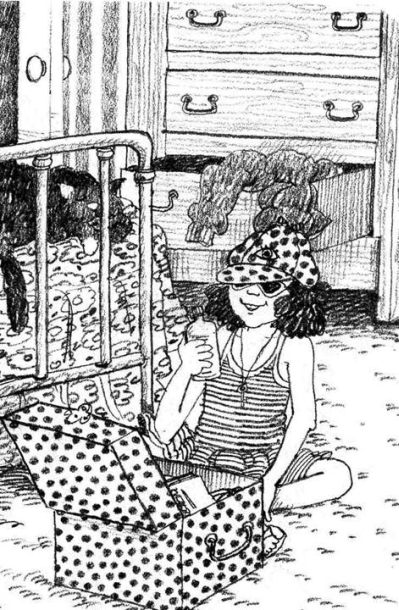 She poked them on her nose.

They made everything so dark, she could hardly see. “Where am I?” she yelled.

Her cat, Powder Puff, looked up and yawned.

Dawn looked around. What else did she need?

She pulled her Polka Dot Private Eye box out from under her bed.

She blew off the dust.

Maybe she could solve a mystery today.

She stuck her pink bottle of No Sunburn, No Kidding in the box last.

“See you later, Powder Puff,” she yelled. “Sorry. No cats allowed at the beach.”

She slid down the banister and ran out the door.

Noni was waiting in the car.

She was wearing a big straw hat with an orange flower.

A piece of cardboard was taped to her nose.

Noni hated to get sunburned.

Dawn opened the door. It was a terrible car.

Two fenders were dented. A window was cracked.

It didn’t have air conditioning. Not one bit.

“It’s as hot as a firecracker!” Dawn said. She slid into the front seat.

“I don’t care,” said Jason from the back. “All I care about is getting in the water.”

Dawn turned around and grinned. “You got here fast.”

“In about two minutes,” said Jill. She was sitting next to Jason.

Jill had red bows on her four braids.

Two in front, two in back.

Her face was red from the heat.

She looks like a tomato, Dawn thought. A nice red one.

Jill was a great friend.

She was a terrible detective, though.

The car rolled down the street.

“Hurry,” Dawn said. “Please.” She had to sit with her detective box on her lap.

It was big and square. It was heavy too.

It was filled with great things.

A pair of snap-on handcuffs.

“I’m going to look for a mystery today,” Dawn said. She crossed her fingers. “I hope I find one.”

Jill leaned forward. “I’m going to look for things in the sand,” she said. “Old coins and stuff.”

Jill tossed her braids back. “Can I use your—”

Dawn drew in her breath. “Hey.” She grabbed Noni’s arm. “Hold your horses.”

Noni put on the brakes.

Her hat sailed off her head.

“You make me nervous,” she told Dawn.

“I forgot something,” Dawn said.

Noni backed the car down the street.

They went from one side to the other.

They stopped at Dawn’s driveway.

Dawn raced out of the car and into the house.

“Out of my way, please,” she shouted to Powder Puff.

She looked under her bed.

She looked behind the curtains . . . and then in the closet.

She yanked it out from behind her dollhouse.

It was a long pole with a box on one end.

It was Noni’s old one.

Noni said she was sick of looking for marvelous metal things.

She said she’d rather do her crossword puzzle.

Dawn grabbed the finder. It was perfect for finding pirate coins. Money too.

It was perfect for solving a mystery.

“L
OOK AT THAT WATER,”
Dawn said from the boardwalk.

“Look at that sand,” said Jason.

They plodded down the boardwalk steps.

Jason carried a doughnut tube over one arm.

Dawn dragged her detective box behind her.

Last came Noni. She tried to keep her straw hat on with one hand.

They looked for a space for their blanket.

The beach was crowded.

People were getting suntans.

“Not too far from the boardwalk,” Noni said. “I like to listen to the merry-go-round music.”

She spread out their blanket near some teenagers. She plunked down the picnic basket.

One of the teenagers smiled at Dawn.

She had short dark hair and a million freckles.

Dawn smiled back. Then she kicked off her flip-flops. “Last one in the water is a french-fried frog,” she yelled.

Jill hopped on the sand. She yanked off one sneaker and tossed it back on the blanket.

She threw off the other one.

“Let me at that water,” she yelled.

Jason was blowing up his doughnut tube.

The sand was hot.

Noni was yelling too. “You forgot your sunscreen,” she said. “Come back.”

Dawn stopped on one foot.

“Put it on,” said Noni. “You’ll be a wrinkled prune by the time you’re sixteen.”

Dawn ran back to the blanket. She opened her Polka Dot Private Eye box.

She pulled out the fat plastic jar and unscrewed the top.

Then she reached in with four fingers for a big dab of No Sunburn, No Kidding.

At the same time she watched the teenagers on the next blanket.

There were four of them. Two boys, two girls.

In the middle was the freckled-faced girl.

Next to her was a boy with a radio on his shoulder. He was jerking his head back and forth to the music.

Jason stopped blowing up the doughnut. “He looks like a chicken, doesn’t he?”

“Look at the other boy,” said Dawn. “The one with hair down to his shoulders.”

Dawn nodded. The girl was wearing a gorgeous silver bathing suit. She had on a sparkly diamond necklace.

She was putting oil on her face, not sunscreen.

Too bad, thought Dawn. She’d be a wrinkled prune any day now.

The blond girl picked up some sand.

She tossed a little on the boy’s long hair.

Then she started to run.

“Yeow,” she yelled as her feet hit the sand.

Long Hair chased after her.

He grabbed for the girl as she reached Dawn’s blanket.

She twisted away from him.

She landed on top of Dawn.

Sand sprayed up in the air.

Noni’s hat flew off her head. 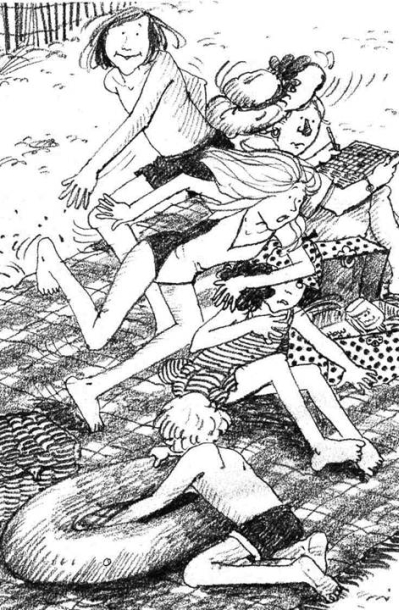 The No Sunburn jar dropped back into the detective box.

The girl scrambled up. “Sorry,” she yelled.

She hopped across the sand toward a little boy. A kindergarten boy, Dawn thought.

About forty-nine toys were piled up on his blanket.

His mother was scrunched up in the middle. She was reading a book.

The boy was building a sand hill.

It was almost as big as he was.

The girl’s foot smashed into it.

The boy began to roar. He picked up his shovel and threw it at her.

The girl leapt away from him.

On the next blanket a man was sitting behind his newspaper.

Puppet On A String by Lizbeth Dusseau
We Put the Baby in Sitter 3 by Cassandra Zara
Murder in the Cake: Cozy Murder Mystery (Harley Hill Mysteries Book 4) by Kennedy Chase
The Coldest War by Ian Tregillis
Our First Christmas by Lisa Jackson
Forest Born by Shannon Hale
Knocking on Heaven's Door: The Path to a Better Way of Death by Katy Butler
Meant For Her by Thomas, Raine
Full Circle by Irina Shapiro
Dark Debts by Karen Hall