The Traitor (The Carnivia Trilogy) 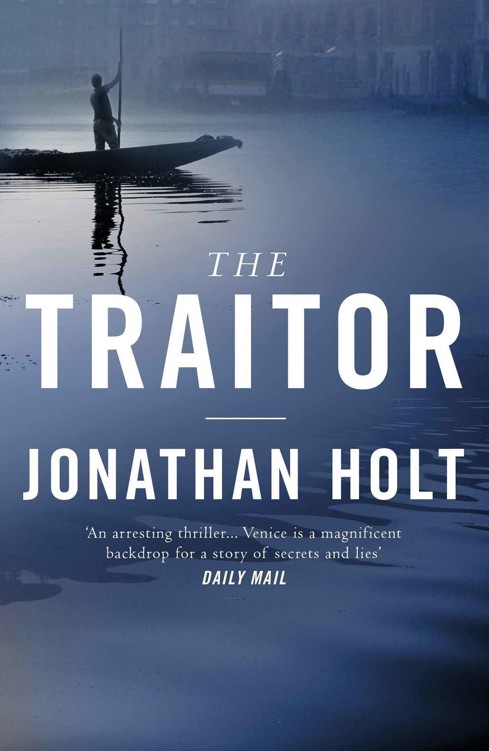 To read this book as the author intended – and for a fuller reading experience – turn on ‘original’ or ‘publisher’s font’ in your text display options.

For we wrestle not against flesh and blood, but against principalities, against powers, against the rulers of the darkness of this world, against spiritual wickedness in high places.

THE
CANDIDATE
WAS
in darkness.

He heard three loud knocks as the two men either side of him struck the heavy door, followed by the response, “Who goes there?” And he heard the answer, confidently given, the words of the ritual flowing in unison from his companions’ tongues.

Guided by their hands on his shoulders, he stepped over the threshold into the room beyond. Although he could see nothing, he sensed that it was large and cool. He smelt burning candle wax, along with the scent of polish from the flagstones under his bare feet.

“Brother, you will step off with your left foot, and bring the heel of your right foot into the hollow of your left,” a quiet, purposeful voice in front of him said.

He did as he was bidden. The instruction was repeated twice more, before the voice said, “Now bring your heels together.”

The candidate kept his face impassive, knowing that those around him would be watching him closely. Inwardly, though, he was exultant. Being told to take the third step was a sign that he had reached the very highest degree of what they liked to call their Craft. All of its so-called secrets would be revealed to him.

But, more importantly, it meant he would be trusted utterly by the silent watchers now gathered round him in a circle. He could ask any favour, and if it was in their power to grant it, it would be his.

At last, he was safe.

It had been a close-run thing. There had been times recently when he had felt as if he was staring into an abyss of panic and terror. But now, finally, he had something to trade with those who had been pursuing him.

He stood meekly as a length of rope, coarse and hairy, was wound around his arm and shoulder. “The candidate is in order, Worshipful, and awaits your further will and pleasure,” one of his companions said when they were done.

“You will cause him to kneel on his naked knees,” the Worshipful Master responded.

The candidate knelt. His knees were bare because his loose cotton trousers – the only clothing he was wearing – had been rolled up to his thighs. There was a cushion on the floor, and when he had positioned himself on it he reached forward to grasp the heavy oak table he knew was also there.

“Candidate, how came you hither?” the Master asked.

“I came neither naked nor clothed, neither barefoot nor shod, deprived of all moneys, means and minerals, blindfolded, and led by the hand of a friend to a door,” he replied.

“Are you willing to make your sacred obligation, and take the oath?”

“I am willing and eager to take the oath.”

“Detach your hands and kiss the book. Then speak your obligation, beneath the gaze of the Great Architect and of us all.”

As the candidate spoke the stark words of the pledge, he fancied he could just make out, through a tiny chink in the antique mask that covered his eyes – the “hoodwink”, in the arcane jargon they loved so much – the flame of a nearby candle. In a few moments, he knew, he would be asked what he most desired. “More light,” he would reply. The Master would reach down to press a lever on the hoodwink, and the velvet-lined eye-covers would spring open to reveal in front of him a chair holding a human skeleton, its ancient, miscoloured bones illuminated by the flames from a dozen silver candelabra. A dramatic piece of ritual theatre, as well as a symbolic reminder of the consequences of betraying his fellows.

Betrayal…
To the candidate, the concept was meaningless. A man looked out for himself. What else was there? But just for a moment the words he was uttering, words that detailed the exact penalty for such a crime, took on meaning. Involuntarily, he faltered.

In the long silence that followed his declaration, the candidate shifted uneasily on the cushion. He must be careful not to make such a mistake again. But if any of the watchers had noticed, they gave no sign of it. In fact, they made no sound whatsoever. For a moment he wondered how many were really there. But why would they hold an initiation to the Third Degree and not invite the full assembly to witness it? He forced himself to relax.

The point of something sharp pressed against the right side of his chest.

The sharp object was lifted away from his chest, then pressed six inches to the left. It felt heavier and sharper than on previous occasions. He must remember to ask about it later, when they were enjoying the convivial drinks that always followed these initiations. They liked nothing better, he had discovered, than to discuss the finer details of their ceremonies and what they signified.

The sharp point was lifted away again. The candidate tensed a little. Next, he knew, the point of the compass would be pressed against his skin hard enough to draw blood. Then the ritual would be almost over.

He certainly wasn’t expecting the long, hard-bladed shiv that thumped with sudden violence between his ribs. With a choking gasp he fell backwards. Waiting hands caught him and set him upright again. He put his hand to his chest and felt the handle of the knife, its blade lodged solidly within him; felt his skin already running with blood, blood that was pumping from his heart in abrupt, jerky spurts. He tried to reach up, to tear off the hoodwink, but his hands no longer obeyed him.

And then, even more terrifyingly, he felt the spurting stop, and knew that his heart was gone.

I
T
WAS
GOING
to be another beautiful day. Although it wasn’t yet nine o’clock, the sun was fierce and the sky clear, with just a few wisps of cloud trapped over the Dolomites to the north. Kat Tapo felt the welcome coolness of the spray on her face as the Carabinieri motorboat bounced down on a wave. She opened the throttle even wider.

In the stern, Second Lieutenant Bagnasco gave a startled gasp as cold seawater slapped her face. She stumbled forwards to the relative safety of the cockpit. As well as being wet, she looked, Kat noticed, somewhat green. She’d been that way even before they neared the Bocca di Lido, the narrow opening or “mouth” in the line of sandbars and islands that separated the calm of the lagoon from the choppier open waters of the Adriatic.

“How long have you been in Venice, Sottotenente?” Kat called over the noise of the engine.

“A month,” the other woman answered dutifully, although she looked as if even speaking was physically difficult right now.

“And you’re still getting seasick? Even when it’s calm like this?” Kat said, surprised.

Bagnasco didn’t reply. It wasn’t the swell making her sick so much as the ridiculously tight turns her superior was executing as she ducked and weaved between the boats going up and down the shipping lane to San Marco. But she knew that telling the
capitano
that wouldn’t make any difference. Captain Tapo was clearly relishing the opportunity to turn on the launch’s flashing blue light and break the speed limit. It had been like this ever since they’d left the pontoon at Rio dei Greci, next to the Carabinieri headquarters in Campo San Zaccaria: Kat had jumped in, as steady on her feet as a gondolier, and got the engine started while Bagnasco was still clambering cautiously down the steps.

The launch veered sharp right as they cleared the artificial island in the middle of the
bocca
. The island was a recent construction, part of the system of giant underwater gates known as MOSE that would – if the politicians were to be believed – protect the city against globally rising sea levels. Like many Venetians, Kat was sceptical. So far fourteen people connected to the construction consortium, including the mayor of Venice, had been arrested on corruption charges, and the project was running years behind schedule as well as billions over budget.

Once beyond the
bocca
the boat continued turning until it was travelling parallel to the long sandy seafront of the Lido. Kat scanned the beach as she steered. Even though they were only a few kilometres from Venice, in these closing days of August the Lido still had the lazy feel of a bathing resort from a different century. Here was Nicelli, the tiny airport where Mussolini once welcomed Hitler to Italy, now only used by the helicopters and light aircraft of the super-rich. Here was the hulking, Fascist-era cinema built to glorify the Italian dictator’s pet film festival, in front of which she could make out a cluster of tiny figures; although why anyone would want to spend a morning as glorious as this watching a movie was beyond her. Here were the endless rows of sunloungers, as closely packed as graves in a cemetery, topped by bodies in every shade from maggot-white to caterpillar-brown. Here too was the elegant Liberty-era façade of the Hôtel des Bains, once Venice’s most famous hotel, where Winston Churchill had begun each day painting a watercolour by the sea’s edge, wrapped in a bathrobe and puffing on a cigar. The hotel was closed now for conversion into apartments, just one more victim of the global recession, while its once-exclusive beach was covered with yet more sunloungers. The hotel
capanne della spiaggia
, the striped Edwardian bathing tents amongst which Visconti had filmed the closing scenes of
Death in Venice
, were still there, towards the rear of the beach, but these days you had to be a millionaire to rent one for the season.

The Goddess Legacy: The Goddess Queen\The Lovestruck Goddess\Goddess of the Underworld\God of Thieves\God of Darkness (Harlequin Teen) by Carter, Aimée
Broadway Babylon by Boze Hadleigh
The Attic by John K. Cox
A Darker Music by Maris Morton
Ethon (The Other Worlds Series Book 2) by M.L. Greye
The Internet of Us by Michael P. Lynch
Miss Seetoh in the World by Catherine Lim
Angel Gone Bad by Sabine Starr
Madeline Carter - 01 - Mad Money by Linda L. Richards
Marine Ever After (Always a Marine) by Long, Heather