The Treachery of Beautiful Things 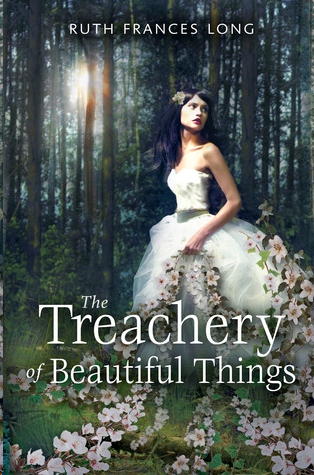 An imprint of Penguin Group (USA)

All rights reserved. No part of this book may be reproduced, scanned,

or distributed in any printed or electronic form without permission. Please do not

participate in or encourage piracy of copyrighted materials in violation of

The treachery of beautiful things / by Ruth Frances Long.

seventeen-year-old Jenny, whose story about Tom’s disappearance has never been believed, sets out to finally say goodbye, but instead she is pulled into a mysterious world of faeries and other creatures where nothing is what it seems.

For Pat, still my hero, always will be

T
he streetlights flickered on outside the window and Jenny looked up from her book. The artificial orange glow etched the silhouettes of leaves and branches against the glass.

In the other room, Tom’s flute sang out, trilling through an arpeggio before breaking into “Haste to the Wedding.” She heard Mrs. Whitlow laugh. Tom’s music could bring delight to anyone, even the vinegar-faced music teacher who had, after two long years of lessons, declared Jenny unteachable. Mother wouldn’t hear of that, naturally, so now Tom got a double lesson, and Jenny? More time to read. And their mother was none the wiser.

Jenny absently slid her locket across its chain and turned back to her novel. She liked it better lost in between the words, with Tom’s melody filling her head like a musical score.

“All right, shrimp?” Tom was smiling down at her. It was already fully dark outside. She hadn’t noticed the time pass. “Ready to go home?”

She looked up at her big brother, taking in his light, slightly rumpled hair, the smile that turned up one cheek, his eyes crinkled at the corners despite their grim, gray cast, and closed her book. Jenny didn’t bother with a bookmark. She read like Tom played. Constantly. Hungrily. Her brother already had his backpack slung over his shoulder, the flute sticking carelessly out of it.

“Sure,” she said, pretending not to notice his forced cheer. She slid her book into her schoolbag and followed him into the chilly evening. “We’re going to be late for tea.”

“We’ll take the shortcut,” he said, hopping down the steps two at a time.

Jenny opened her mouth to argue, but Tom crossed the road before she could say a word. In sunlight, she wouldn’t think twice about taking the route past Branley Copse. It cut the trip home in half. But now, with the sun gone down behind the distant hills—

“Oh, come on, Jenny.” Lately his laugh had developed a sharp, staccato edge. “Stop being so scared.”

Jenny shifted her bag from one shoulder to the other. She couldn’t hold it against him. No one could hold anything against Tom. His smile alone, the jokes that hung around his eyes, would soon persuade them to his side.

Tom strode ahead and Jenny ran to catch up before his long strides left her behind. At fourteen, he was already almost as tall as Dad. No wonder he called her shrimp.

“What did she say about the audition?” Jenny finally asked, careful to keep her eyes straight ahead.

Tom shrugged. “It’ll be fine. Listen.” He reached back and pulled out the flute like a musketeer drawing his sword. The notes floated out through the twilight, haunting and beautiful. For a moment the music beguiled even her. But not entirely. There was something about the stiffness of her brother’s shoulders…She peered up at him in concern. Tom had a wildness about him tonight, something just a bit desperate, as if his music scared him and yet he needed it. His eyes slid closed, and for a moment she felt like she lost him, or maybe on hearing his music, lost a little part of herself.

They reached the tree line and turned to walk along its edge, leaving the streetlights behind them.

To her left, the ground rose to a mound where the trunks took root, forming a lattice of increasing darkness the deeper she stared into the woods. She and Tom were only cutting along the edge, Jenny reassured herself, not actually going through the trees. And Tom was there beside her, playing his music, just because he could.

Jenny paused, breathing deep for a moment, the notes clear and crisp as the air itself. They floated around her, soared and trilled, setting the hairs on the back of her neck shivering. They reverberated through her body, harmonizing with the rush of blood through her veins. The wind
picked up, the trees moving almost in time to the music, the patch of woodland swelling in the darkness to embody something old and vast, the ancient forests that had once covered all the Weald. And all because of Tom’s music, she thought distantly. Music that was more than half magic.

Tom broke off abruptly, sighing. The forest seemed to subside, his pied piper trick over. Jenny shook her head. Her imagination. That was all. Dad always said so.

She slid her locket back and forth along its chain nervously.

“You’ll twist that right off one of these days,” Tom teased. “Then where will you keep your secrets?”

Jenny let go of the empty locket and it fell back against her chest. “I don’t have any secrets.”

He tilted his head to one side. “Not yet. But you’ll need somewhere to keep them when you do, won’t you?”

Jenny shrugged. The silence stretched until she remembered her question. “Don’t you want to do it?” she asked. “The audition?”

Tom glanced at her with a wry smile. “Mother wants me to do it.” He picked up speed, the flute still clutched in his fist. “So that’s that. You know what, though?” He only paused for a second, not giving her enough time to answer. “She hasn’t thought it through. I mean, she’ll have to back off a bit, won’t she?”

“Well, maybe.”
But doubtful.
Jenny didn’t say that bit. His
mood was fragile enough. Gifted, they called him, and Tom was, in so many ways. But while the world saw his musical abilities, Jenny saw only her brother. He loved his music, but not the pressure that came with it. From their parents most of all.

There was a sudden rustle of leaves beside her legs and Jenny jumped in alarm. “Did you hear that?” she asked.

“Hear what?” Tom walked on, but Jenny stopped, staring into the dark woods. No light reached inside. The streetlights were too far away, barely illuminating the edge. And the lights of the football field on the other side were still distant. She leaned forward.

Something moved amid the trees, floating like a dream. Something made of leaves and bark, root and branch, but not.

At the sound of her voice it turned, twisting around on itself, quicker than a cat, to peer at her with berry-bright eyes. Leaves and thorns tangled where hair should have been. Bark and moss made up the body. Every part of it was composed of living things, of elements of the forest and the trees. It lurched forward, heading straight for the tree line, for her.

Jenny gasped and fell backward, the world tilting. Tom yelled her name and sprinted toward her. The trees surged after him. Vines lashed out, whispering, snapping, tangling
around his arms. Roots burst from the ground to trip him. Tom fell with a crash, the air knocked out of him, his eyes wide. The ground heaved beneath them and the roots broke free of the earth, cracking, twining around him, reaching for Jenny.

“Run,” her brother shouted, digging his fingers into the earth, trying to gain purchase. He tore up the grass and the dark earth beneath. “Jenny, run!”

With a sound like a million scratching leaves, the trees pulled him away from her and swallowed him in their embrace.

Jenny scrambled back as the ground beneath her began to buck and rupture. Before she could get her footing, they were on her again. Pulling, grabbing, tightening around her. Roots, vines, thorns tearing into her skin. She screamed. Something stepped right up to the edge of the trees then, gnarled and twisted as ancient bog oak, and everything fell still.

Jenny lifted her head. “Tom?” she whispered uselessly, too quiet to be heard. This was not Tom.

The ageless gaze trailed over her face, assessing, measuring. Then it turned away and was gone, back into the silent woods.

How often had she worried at those words, turning them over and over in her mind until they shone like river-polished stones?

Jenny hesitated at the corner of the street, feeling the familiar lure of the trees. She could hear laughter. The sound of children playing in the distance maybe. Or perhaps it was in her head. She wasn’t sure. She was never sure. And it never mattered where the trees were. They always called to her, whispered to her to find him. But here…here where it had happened…She couldn’t believe how powerful the pull was here.

Tom had laughed as he strode ahead of her.
Oh, come on, Jenny. Stop being so scared.

And the trees had swallowed him whole.

Her throat closed up as she remembered the frantic search, the disorienting horror of the woods at night. She’d only been ten, blind with tears and panic, tearing her way
through undergrowth and brambles. Hours later when it seemed no time had passed at all, they’d found her with torn clothes, her skin scratched and bleeding, still calling his name. And no Tom.