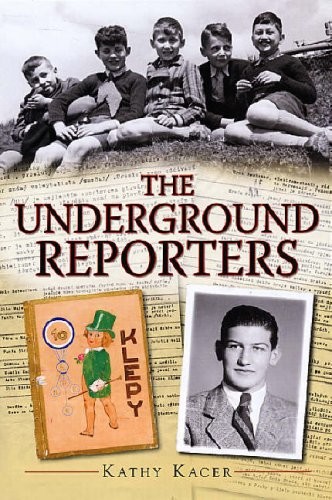 The photographs used in this book were contributed by the following people: Kathy Kacer, John Freund, Jirka Kende, Hana Kende, and Frances Nassau. The photographs of
Klepy
are from the Jewish Museum in Prague. The photograph of Adolf Hitler reviewing his troops, as well as the three maps
of Czechoslovakia, are from the United States Holocaust Memorial Museum.

Second Story Press gratefully acknowledges the support of the Ontario Arts Council and the Canada Council for the Arts for our publishing program. We acknowledge the financial support of the Government of Canada through the Book Publishing Industry Development Program, and the Government of Ontario through the Ontario Media Development Corporation’s Ontario Book Initiative.

For John Freund, with gratitude and admiration,
and for my children, Gabi and Jake.

28   A Wedding in Theresienstadt

30   Life and Death in Auschwitz

On Tuesday, April 14, 1942, John Freund awoke as he did every morning. He got up, ate breakfast with his family, buttoned his clean white shirt, and put on his jacket. But on this day everything else was different because he was going on a journey. John licked his hand and smoothed down his short, brown, wavy hair, his dark eyes round and uncertain. He took a deep breath and glanced around at the room he had shared with his brother, Karel, for his whole life – almost twelve years. John’s soccer ball rested in a corner of the room, along with his table tennis paddle. He was leaving these and other prized possessions behind for this journey. There would be no toys where he was going.

At any other time, the thought of a trip would have been exciting. But these were not ordinary times, and John and his family had no choice about leaving.
Why are we being forced out of our home?
he wondered.
We haven’t done anything wrong.
But these days, his parents just turned away when he asked hard questions. “Hurry up, John,” his mother called from the kitchen. She was just wrapping up the rolls she had baked.
We can’t take very much with us,
she thought grimly,
but we still have to eat.

John’s father entered the kitchen, glancing sadly at his wife. “I’m taking my doctor’s bag with me after all,” he announced, “even though they haven’t let me treat patients here for some time. The medicines and medical equipment may come in handy wherever we end up.”

His wife nodded and turned back to the food she was packing. “It’s time to leave, John,” she called.

John looked down at his bed, piled high with his belongings. Fifty kilograms (110 pounds) of luggage was not very much. Should he take books or clothing? If they were going to be away over winter, he would need warm clothes. He tossed one more sweater into his suitcase and closed it, took another deep breath, and picked up his case. Then John and his family walked out of their home for the last time.

In another part of town, Ruda Stadler was also worrying about what to take when he left home. Most of all, he was worried about the newspapers. There were twenty-two editions of the newspaper, and hundreds of hours had gone into making them. He stared down at the collection.
I have to do something with these,
he thought desperately.
I have to find a way to keep them safe.

“What are we going to do with these?” asked Ruda as his older sister, Irena, entered the room.

“We could take them with us,” she suggested.

“No,” said Ruda, “I don’t think that’s a good idea.” He didn’t know what was going to happen to his family, but he knew things were not going to
be good. There was too much uncertainty ahead – too many rumors about terrible conditions and harsh treatment. Besides, the collection of newspapers weighed a lot. He needed the space in his suitcase for clothing and other supplies. “But we can’t just leave them here.”

These were more than just newspapers. They contained the thoughts and ideas of many young people, who had written about the daily events of their lives and their dreams for the future. Despite the hardships of the previous years, Ruda and his friends had poured their hearts into these papers. They had tried, through their writing, to look at life optimistically. They held hope for a peaceful world to come. All of this was reflected in these twenty-two editions; this collection was their legacy. If Ruda left the papers behind in his home, they might be destroyed. If he took them with him, they might still be lost.

All across town, Jewish families walked out of their homes that day, leaving behind their precious belongings – paintings, books, dishes, clothing, and furniture. Their destination was Theresienstadt, the concentration camp where they were to be imprisoned. They did not know how long they would be away, or what conditions would be like in Theresienstadt. They tried not to think too much about the future. They were worried enough about what they were leaving behind, without
tormenting themselves about what they might find ahead. They had their families, at least. A few young children whimpered but mostly the families moved silently toward the factory in town where they would spend the next few days, waiting for trains that would take them to Theresienstadt. One thousand Jewish people walked across town that day, all of them lo st in their own thoughts.

As he moved through the quiet streets, carrying his suitcase, John looked up at the strained faces of his parents. They were trying to pretend that everything would be fine, but he didn’t believe them. He didn’t like to see them looking so anxious. It made him afraid, and he didn’t want to be scared. Maybe the move to Theresienstadt would be an adventure, he thought, trying, as he always did, to be positive. Since the swimming hole had closed and they had stopped writing the newspaper, things had become so lonely in town.

Thoughts of the newspaper and the swimming hole suddenly filled John’s mind, and memories came rushing back to him. It’s a funny thing about memories, he realized. You can’t stop them once they start. They’re like water flowing freely from an open faucet; like the fast-flowing waters of the river by the swimming hole where he and his good friends had spent the happiest times he could remember, playing games, forming close friendships, and creating the newspaper that would become the focus of their energy and imagination. For John, walking away from everything he knew, the memories were suddenly overwhelming. He remembered back to 1939 - not so long ago - when all of this had begun. 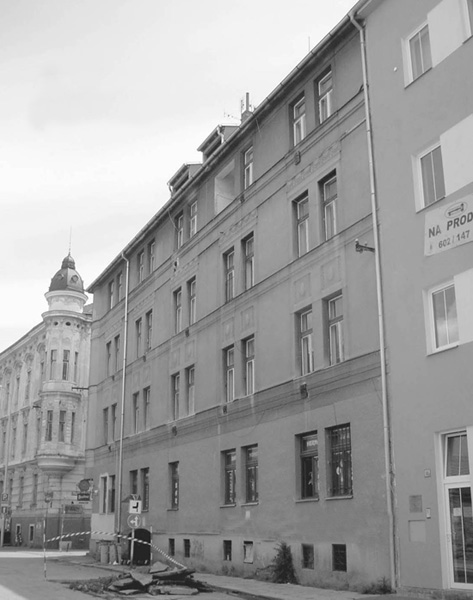 John and his family lived on the second floor of this apartment building.

About 150 kilometers (ninety-five miles) south of Prague, the capital city of the country that was once called Czechoslovakia, there is a town called Budejovice (pronounced Boo-day-ho-vee-tsay). The Czech king Premsyl Otakar 11 established the town a long time ago, in 1265. It lies in a valley where the rivers Vltava and Malse (pronounced Mal-sheh) come together and encircle the entire town, like a giant moat around a castle.

Jalia in the North (Jalia - World of Jalon) by John Booth
Getting Lucky (A Lucky Novella) by Gioertz, Karina
Mamba Point by Kurtis Scaletta
The Darkest Hour by Katherine Howell
Six Feet Over: Adventures in the Afterlife by Mary Roach
Death by Haunting by Abigail Keam
Peligro Inminente by Agatha Christie
The Glory of Green by Judy Christie
What a Bride Wants by Kelly Hunter
Full Court Press by Eric Walters