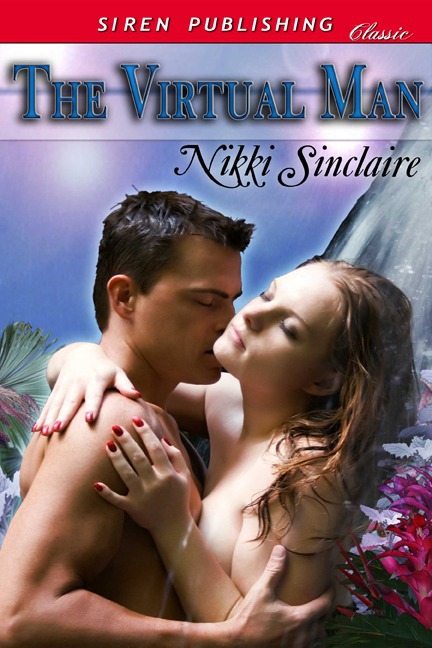 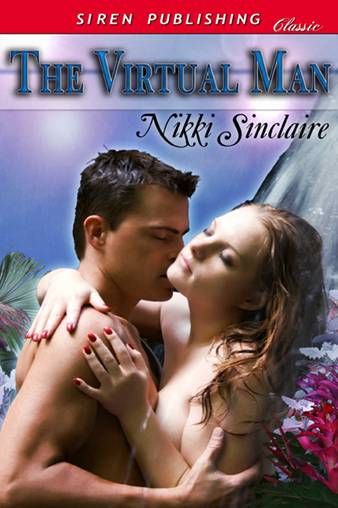 Jaded from an ugly divorce, and traveling to the edge of colonized space on a luxury starship, Tiana Weiss books a suite equipped with a holographic chamber. Anticipating a vacation in a virtual world limited only by her imagination, without men, Tiana finds, to her surprise, the chamber comes equipped with its own holographic attendant, resembling a Greek god straight from Mt. Olympus.

Discovering the 'holograph,' for which she felt an unwanted, inexplicable, physical and emotional attraction, is actually Derek Hart, a brilliant computer programmer and escaped convict. Tiana's trip takes on the proportions and heat of a comet trying to wrench free from the gravitational pull of a collapsing star as she begins trading her anger and hurt for wanton desire.

ABOUT THE E-BOOK VERSION:
Your non-refundable purchase of this e-book allows you to
one
LEGAL
copy for your own personal use. It is
ILLEGAL
to send your copy to someone who did not pay for it. Distribution of this e-book, in whole or in part, online, offline, in print or in any way or any other method currently known or yet to be invented, is forbidden without the prior written permission of both the publisher and the copyright owner of this book.

All logo copyright © 2008 by SirenPublishing, Inc.

ALL
RIGHTS RESERVED:
This literary work may not be reproduced or transmitted in any form or by any means, including electronic or photographic reproduction, in whole or in part, without express written permission.

To the love of my life, who, after twenty-three glorious years of marriage, still sets my blood on fire! Without your love and encouragement there would be no book. I love you!

Chapter 1
At the Courthouse

“No!” Tiana hissed as she slapped Darius-20, her robotic legal representative for her divorce proceedings, on the side of its metal head, stomping her high-heeled sandaled foot on the antique marble-floored lobby of the Georgia Justice Center. Would her nightmare of a marriage never end? Attempting to steel her resolve, knowing it was going to be either sobbing or screaming, she brought her temper back under control. Nothing was going her way today.

Let me try to explain this to the tin can one more time
, she thought in despair.

“It takes seventeen days to travel to the Magellan Outpost and I’m not scheduled to return to Earth for two years.” Counting carefully on her fingers, as if speaking to a child, she continued, “This is my job. I have to go. I have to go in an hour. You need to—”

Tiana’s explanation was cut short by a loud thud, accompanied by the sound of furniture legs scraping across the marble floor. She was sure something or someone was about to fall on her. Startled from her diatribe she turned toward the sound and saw a man falling at her feet.

Hmmm, maybe this is a good omen
.
It would be nice to have men falling at my feet … making it easier to kick them in the balls, step on their faces and, should they happen to have one, rip out their little hearts with the stiletto heel of my shoe!

Wow, where did that thought come from? Tom, her cheating, abusive, soon-to-be-ex-husband had really done a number on her. She was becoming a man-hating cynic. She eyed the stranger at her feet.

“Are you okay? Would you like me to spread my legs wider to give you a better view?” Her sarcasm seemed lost on the stranger, who was now sporting the sneaky, shit-eating grin of a little boy who had been caught with his hand in the cookie jar.

The man was wearing the bright orange jumpsuit of a Galactic Alliance prisoner. Just her luck. As she’s trying to get rid of one deadbeat, another one drops in her path. Maybe it was her perfume.
Eau de Bum! Guaranteed to drive the parasites in your life wild with lust!

The man stretched his hand out to her. Without thinking, or realizing the consequences of her action, Tiana automatically grabbed it to help him up. Prisoner or not, he was a human being and the least she could do was help him up. Besides, the sooner he got up, the sooner he would look somewhere else. As their hands touched, Tiana’s heart raced, her breathing became erratic and she swayed on her feet. To add to her predicament, heat rose up between her legs and she felt herself involuntarily twitch at the unexpected contact. There was a sexual sensory connection in that touch that she had never felt before. Alarmed in that fraction of a second that it took to feel the jolt of lust, she let go of the stranger and pulled her hand back, watching in shock as he fell back down, his eyes seeming to reconnect with her panties.

This time his gaze did not bother Tiana. Instead, she felt empowered and energized. She felt his eyes searing and elating her most personal area, much as a laser would cut through a steel plate.

The stranger quickly regained his composure and helped himself up. As he raised the fullness of his frame up off the floor, his gaze progressed up her body with leisurely confidence. She felt a wave of heat following it, burning wherever his eyes lingered. Tiana stood her ground watching his body go up … and up … and up.

His hair and beard were long and scraggly, not quite to her liking, but he sure smelled good. He smelled like, well, a man. Plain and simple he smelled like a man, not like a bottle of men’s cologne, sissy soap or sweat for that matter. Tiana watched helplessly as his brilliant blue eyes swept over her face, making contact with hers, and a smile more potent than a thousand disruptor cannons took her breath away.

Er, excuse me, sir, would you mind removing your ugly jail jumpsuit so that I may check out your body and relieve my curiosity? Arghh!!! Cancel that thought. Control, control, control, Tiana. He’s a criminal, for crying out loud.

She was not going to let this piece of incontrovertible evidence of the fact that men had evolved from prehistoric swine rattle her. He had been shamelessly looking up her dress, for goodness’ sake. Orange Jumpsuit Guy was no different than Tom. He had one thing in mind and she knew it wasn’t discussing weather programming.

“I am now,” he finally responded to her inquiry after several seconds of silence. “With regards to your legs, they’re spread just fine, but I am much obliged for the offer.” The man spoke with a sexy drawl that hijacked her thoughts back to her teen years. Back to those summer afternoons at her parents’ ancestral home, in one of the few still rural parts of the North Georgia mountains. Those days life was simple. It had been spent lazily sipping sweet tea on the front porch with her family, talking about everything, yet nothing in particular.

With a grin, he cocked his head and said, “So, my fair goddess, are you busy for dinner …”

Oh my, there’s a mouth to die for underneath that beard, with killer white teeth and full yummy lips. I wonder what his tongue would feel—No! Stop! That’s my vagina thinking, not my brain.
Clearly, the last thirteen months without sex had taken their toll on her.

With her knees unexpectedly quivering, heart racing and desire burning through her body, Tiana was formulating a shameless answer to his question, but was too shy to say, “
Woo hoo! Ditch the outfit and let’s have dinner at a clothing-optional restaurant, baby!”
when he continued and finished the question, “… twenty years from tonight?”

“Here, let me check my calendar,” she responded with a sarcastic smile, batting her eyelashes at him, as she searched through her purse.

Where is my laser stunner? The darn thing is so small you can’t ever find it when you need it.

Unable to produce her laser stunner on short notice, she grabbed one of her luggage tracking labels and slapped it over the man’s mouth.

I hope it hurts like hell when he rips it off
.

“Save it for someone who cares, pervert. You’re just like my ex. All sweet, sexy and charming on the outside, but inside you’re a Dalutian vampire just waiting to drain every drop of life out of its mate, and when you do, you simply toss her aside and replace her with a younger one.” Tiana’s demeanor exuded confidence on the outside, but inside, tears were threatening. This incident just added to her pain. She had given her heart completely to her husband and he had repaid her with treachery, deceit and heartache. Love. She would not repeat that mistake. Ever!

Apparently realizing that the situation was getting out of control, the Marshall who was escorting the annoying convict stepped in, mumbled something to the prisoner and pulled him away.

As she watched the prisoner being led away through the atrium, Tiana heard Darius-20’s composed voice warn, “Ms. Weiss, let me remind you that I am the property of the state. By Statute 4756.2.a.1 if I am damaged during contractual services for your relational disassociation proceedings you will be responsible for the cost of all repairs.”

The encounter with Orange Jumpsuit Guy having pushed Tiana over the edge, her anger flared at the clueless robot.

“Look, tinhead, I didn’t want nor ask for this ‘relational disassociation.’ Based on where I find myself at this time, if I am not divorced and on my starship by the time it’s ready to launch I will gladly invest however much money it takes to disassociate you from the state, disconnect your speech chip, bury you up to your neck in my front lawn and leave you to be a fire hydrant, an ugly fire hydrant I might add, for the neighborhood dogs. Do I make myself clear?”