The Vitalis Chronicles: Steps of Krakador 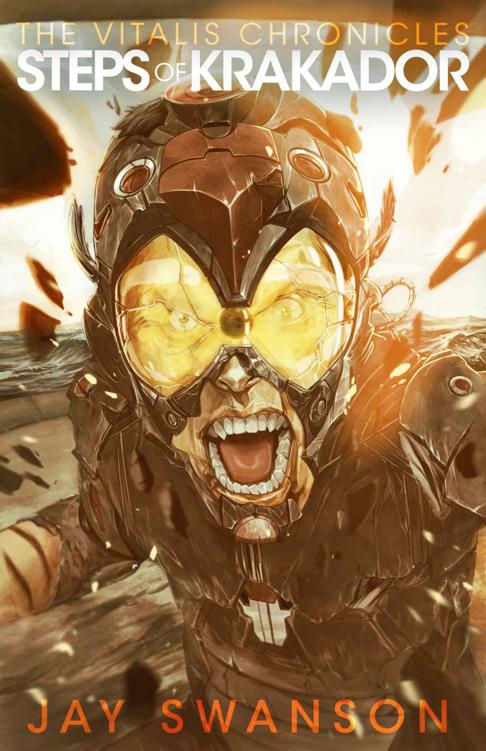 ~Legal info in back~

In its entirety, this story is for my parents.

Without your belief, your support, and your love

This trilogy would not exist.

Thank you for everything. 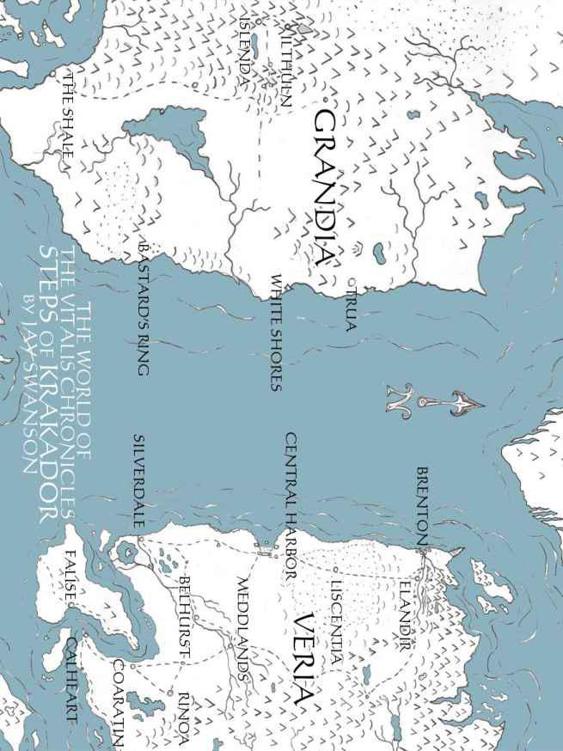 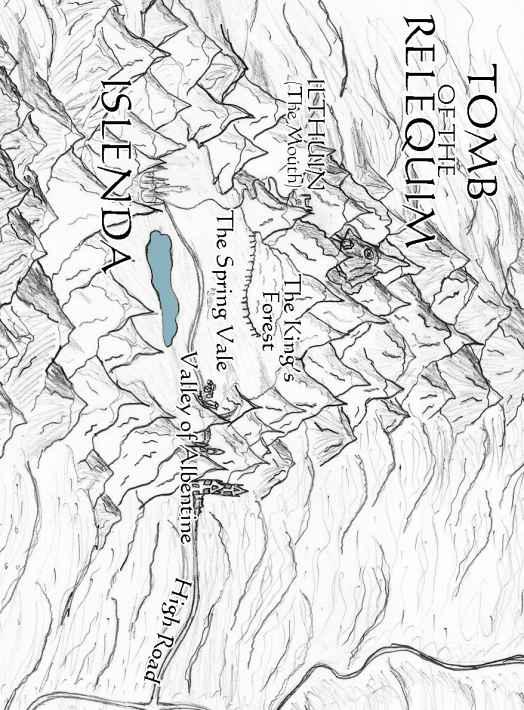 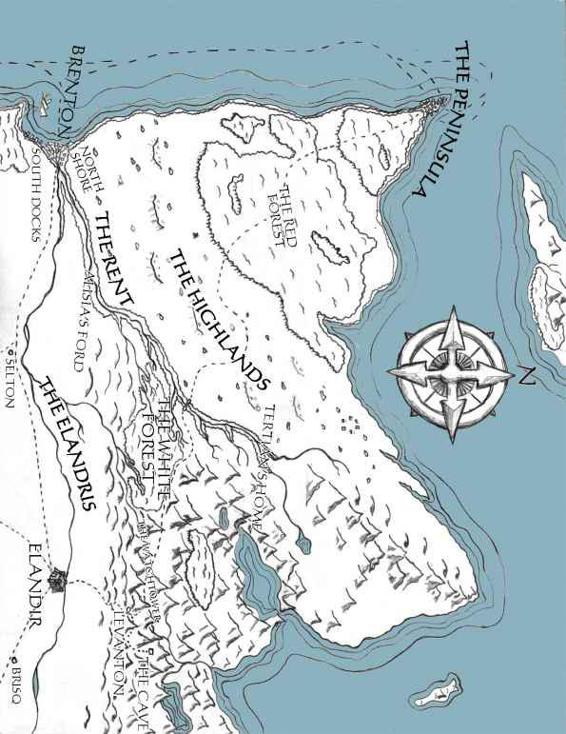 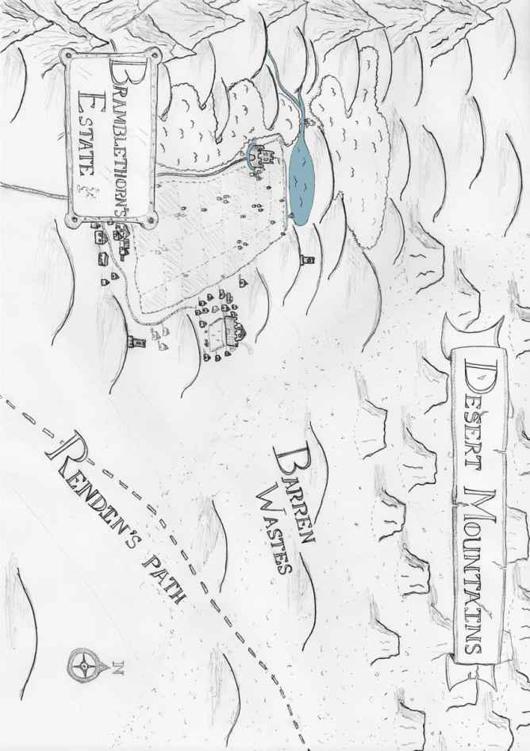 A
RDIN
V
ITALIS LAUNCHED TO HIS FEET, THE WORLD COMING RAPIDLY INTO FOCUS AROUND HIM
. And then there was nothing. He stood in the midst of swirling mists and hues of gray. The ground beneath his feet felt level, but he couldn't see past his knees. His heart raced, blood pumping so loudly in his ears he strained to hear if anything around him made any noise at all.

The silence was complete. He turned, searching for the mountains, looking desperately for the bridge on which he stood and the abyss over which it ran.
The abyss
. He stopped turning for fear of any misstep. Perhaps he had been blinded. The last thing he wanted was to careen over the edge to his death. To follow the Shadow King.

The Shadow King.
The thought struck his mind like a drum, and suddenly the world began to take form. The mists cleared from around his feet, swirling and whisking away from him with increasing intensity. He could see the cracks in the stone, the edge of the curb. Hope sprung anew behind the adrenaline, and, as if in response, the mists vanished into the distance. It was as if a wind had flown out from him, pressing the fog farther and farther until he could see the Cathedral, the Tomb, the floating mountain, and finally the entire mountain range known as the Dragon's Teeth surrounding him.

How did I get here?
He was at the center of the bridge. Only moments before, he had been at the very foot of the Cathedral, the tall structure built into the side of the floating mountain that encased the Tomb of the Relequim.
And where is all the color?

That was a strange realization. There was no blue in the sky. No pink on his hands. Even the bloody patches in his leather armor looked black in this light. Was it the light? Or was it something else?

He turned in place again, suddenly uncertain of his whereabouts. Fear crept into the edges of his consciousness as his fingers tightened into fists. He reached for his sword, sliding the blade out by its hilt.
When did I sheathe this?

And then he heard the voice. “I was beginning to wonder if you would ever come through.”

The hairs on the back of Ardin's neck rose, prickling against the tingles that coursed down his spine. He found himself unwilling to turn but forced to do so nonetheless. “No.” Disbelief cut any other words short as he caught sight of the billowing black cloak and streaming silver hair.

The Shadow King smiled. He adjusted his grip on the exaggeratedly long blade in his left hand. He held the hilt loosely against his leg so that the tip rested just above the ground.

“
This is my world, boy.” He raised the blade slowly and pinched it with his free hand. The Shade ran his gloved fingers along the blindingly sharp edge as if to inspect it. “Here, the tricks of the Magi cannot save you.”

M
AJOR
A
NDERS
K
EATON SPUN AS HARD AS HE COULD
. He dragged the cold steel of his sword across the face of the closest Woad diving to tackle him. The edge bit, flaying the creature's stunted face open before continuing on into the second monster. But the momentum of the first had not been nullified. Keaton took the blow from the flying corpse in the shoulder. It knocked him down with a jolt, and he pulled the second Woad with him as the blade stuck in its throat. The third monster careened over all of them. It reached down for him and scrambled as it caught nothing but the scent of its prey in passing.

Greasy black fur and yellow teeth only compounded the effect of the creatures' stench as their bodies rested on and around Anders. His head swam, but his heart was pumping. He was on his feet in seconds, roaring his challenge as the deep rumble of the monsters' growls grew to a tremorous pitch. He could see them all clearly, circling him on the face of the hill like a writhing school of venomous fish. There were hundreds left, each and every one of them staring up at him with those beady black eyes.

They were waiting. He had never known these monsters to slow down, let alone hesitate before a kill. They were senseless, suicidal in their determination to slaughter anything and everything they could get their claws on. They had killed all of his men, but not before they destroyed the men fighting in the valley below. Keaton turned in place on the hilltop, watching them as closely as he could, yet knowing it was futile. He was surrounded.

“
C'mon!” He yelled. “
COME ON!
”
He tore the leather mask from his face and flung his winged Hunter's helmet at the nearest Woad.
Don't leave me alive,
he heard his plea behind the fear and the adrenaline.
Don't kill my men and let me live... not again.
“
What are you waiting for, you bastards?!”

He lunged forward to stab at one of the beasts, but it feinted back and evaded his jab. He tried again but with the same result.
It's like they want me to survive... like they're being held back.
Concussions thudded dully somewhere near the battle lines. The noise barely registered in Keaton's mind. There was little left down there, he knew, so he dismissed it as some magazine detonating near the guns he had destroyed only hours before. They had sent him out here to die, yet that was exactly what he seemed incapable of doing.

“
WHAT THE HELL ARE YOU WAITING FOR?!
”
He flung his sword in roaring frustration. As if on some preset cue, every creature on the hill stopped simultaneously. The dome of earth was covered in silent, black statues that did little more than stare at him. The fire in his heart went out at the sight. His shouts withered into whispers. “What are you waiting for?”

In response, the base of the hill before him was cleared by an explosion that knocked him on his back. Dirt and body parts flew in equal measure as the monsters died in droves. Before Keaton could get back to his feet, more concussions rocked the hill all around him, blasting the black monsters into the air in rapid succession until he could no longer see or hear a thing. Then he felt an impact in his chest so hard that he thought he had exploded himself. It took him a moment to realize he was flying through the acrid fog of blood and dust. Then the blackness through which he flew became his reality.

Anders Keaton opened his eyes to a blinding haze, the sky above riddled with streams of smoke and swirls of fire. But as his vision cleared, a face appeared. There was no face, really, just a hood with dark black emptiness inside of it behind the peak of some plate of armor.

The ringing in his ears made him believe what he was seeing was real. It looked like the hood was trying to tell him something, but the sharp tone was all he could hear. It was splitting his skull, resonating through his brain like a vibrating shard of glass. He would have thrown up if he had had the energy, but he couldn't move.
Oh God, I can't move.
A fresh flush of terror rushed up his neck.

Massive armored arms reached down for him, their gloved ends touching the sides of his head. He felt something warm spread along his temples and into his ears. The ringing subsided, the pain disappeared.

“
I need you to hear me, Anders Keaton.”

That voice, he knew that voice.

“
Di...” Speaking was difficult. His lips were chapped and he tasted blood in his mouth. “Did you do tha... that to me?”

“
I was too late to rescue you, Anders.”
The voice sounded apologetic. “
Those were the shells of your own army. Their guns were finally deployed after you engaged the enemy's creatures.”

After Many a Summer Dies the Swan by Aldous Huxley
A Deadly Thaw by Sarah Ward
Anathema - The Song of Eloh Saga, Book 2 by Megg Jensen
Touch of the Demon by Diana Rowland
Life Begins by Amanda Brookfield
The Lost Garden (The Lost Garden Trilogy Book 1) by K.T. Tomb
Things We Left Unsaid by Zoya Pirzad
On the Job by Beth Kery
Real World by Natsuo Kirino
Best Friends Forever by Kimberla Lawson Roby