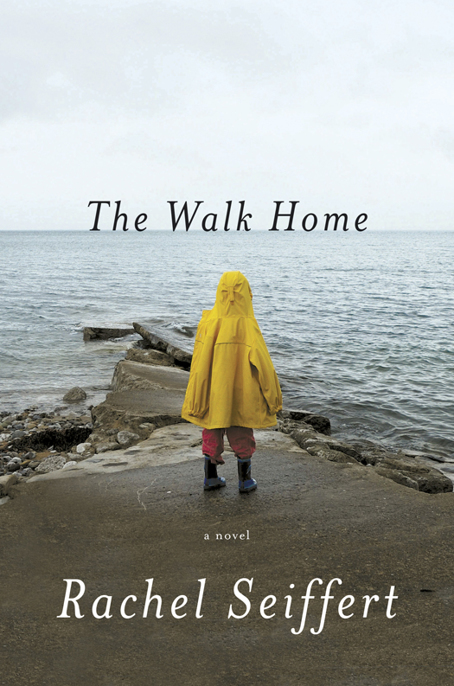 I’m glad to have them.

The boy turned up with no work boots, just a pair of old trainers, and a holdall slung across his back, almost as big as he was. Jozef looked at him, doubtful, on the doorstep; at his red hair and freckles, and the way he squinted in the summer light, the June sun already up above the rooftops.

The church clock opposite said ten past six, so he must be just off the London bus; no hanging about, he looked like he’d come straight down to the South Side on foot. The boy gave a nod, a shrug:

And Jozef had agreed to do that, it was true. So he stood to one side to let him in.

Romek had told him the boy was nineteen, but he didn’t look it: too slight across the shoulders. His red head was cut close, and the back of his skinny neck too pale, blue-pale above his T-shirt. Jozef watched him as he showed him around the big house: the stripped-bare rooms, and up and down the wide stairs. All the work still to be completed. The boy walked ahead of him through the empty top floor that commanded the best views, over the park in full leaf, and all the other sandstone villas. This place could fetch a premium price, so Jozef said:

“The developer, he wants hardwood on the floors, built-in wardrobes. Quality finish.”

The boy narrowed his eyes at that, running a critical palm across the plasterwork, and Jozef sighed:

“I know, I know. Not good enough. But the one who did those walls, he’s gone now.”

The boy gave a smile, as though he’d already been told, and Jozef didn’t much like to see that. Just how much had Romek been saying?

Jozef was struggling up here, and he didn’t want that spread wide; he couldn’t have it getting back to Poland and his wife. He needed this job to work out so he could talk Ewa round, into trying again. But things kept getting away from him somehow, and far too easily: his workers falling out, and failing to show after payday, the ones he’d found in Glasgow anyway. It was as though they’d sniffed him out: not site-boss material, too soft, not nearly bottom line enough, and Jozef cursed that it showed. But Romek was a proper site-boss, of the Polish old school—big-hearted, but hard too, when it was needed—and he’d promised him a good worker. Romek had said this boy was one of the best he’d found in London, plus
he was from round here, so he could help Jozef with the locals, the way they spoke.

Back downstairs, they stood together in the half-built kitchen, the boy at the door, like he was ready to get lost again, any moment. Still uneasy, Jozef put the kettle on for tea, but he had no food to offer. He’d been living on the ground floor while he did up the rest of the building; he saved on rent, the developer on security, and it meant Jozef was putting aside a good sum each month. Come the end of the summer, he’d go back to Gdańsk and show Ewa: how much he’d saved, and that he could still make things work for them. In the meantime, it was the others who brought in the food, all his workers, the ones he’d found from home. Some of them had their families here now, and their wives packed extra for Jozef; sympathy meals, but he was grateful. He told the boy:

“We have some breakfast when we start. We start eight o’clock.”

The boy gave that same nod-shrug again, his eyes not on Jozef but the Glasgow morning, blue beyond the garden door. The long back gardens sloped on down the hill, and after that came the rooftops of the South Side tenements, with the sun already high above the slates and chimney pots. The summers here were bright but short, and not nearly warm enough, and Jozef couldn’t tell what the boy was thinking: if he liked what he was seeing, if he was ready to start on this job.

His clothes had been worked in, even if they weren’t work clothes: his T-shirt thin with wearing, jeans trodden down at the hems. The boy had a patch on his knee, sewn on badly, with a hand pictured on it: a red one, held up, palm forward,
No Surrender
stitched underneath. Jozef hadn’t been here long, but he suspected that was from a football club. Most of his workers
followed one club or another, but Jozef didn’t. He’d grown up in a houseful of women and never grew to like the game, or pay it much attention, he only knew that one Glasgow team wore blue, the other stripes, green and white, and the fans did so much fighting. It was a split in the city that went deeper than sport, and he didn’t pretend to understand it, but it made Jozef wary; he’d warned his men not to take sides, or go drinking on game nights. The pubs here put signs on their doors, no football colours in the bar, and Jozef didn’t want work days lost to a pub brawl, so he looked again at the boy’s patch, the raised palm an angry red, and he wondered which side this hand belonged to. But then he told himself:
as long as the boy gets on with the others
. And at least he’d be the only Scot among them.

They had three floors, and a bit less than four weeks to finish them. Almost mid-summer now, they had till the first July weekend to get out, so Jozef was pressed for time. Romek had told him the boy was just what he needed: an extra pair of hands, without the extra paperwork, no National Insurance Number, no questions asked. Jozef had expected someone bigger, though. And work boots too.

“You can’t wear these ones.”

He nodded to the boy’s trainers, spattered with gobs of plaster. From the look of the frayed laces, he must have been wearing them on the job for ages. The boy stepped forward, reaching for the mug he’d filled, and the sugar bag too, and then he pointed down at his holdall with the teaspoon between stirs.

That made Jozef laugh. It was just like Romek to give his son’s boots to a stranger’s child. This boy must be someone’s, so Jozef asked:

“Who will you stay with?”

And then the boy looked at him, sharp:

He pointed to the ceiling, the rooms up there:

“Romek tellt me that was part ae the deal.”

He blinked at Jozef, looking straight at him now, but his eyes were guarded:

“I’ve a sleeping bag an that. Nae bother. I can take care ae mysel.”

The boy said it like he’d been doing that for a long time. It was the most he’d said since he arrived, so Jozef watched him, his young face, and the way he drank his tea, his eyes turning away again, back out to the skyline. Romek had said nothing about him staying in the house, or that there might be trouble with his family. But then the church clock struck the quarter, and the boy put down his mug:

If he was willing to start early, Jozef wasn’t going to argue. He shrugged his assent: there was no shortage of empty rooms upstairs, and as long as this boy got the work done, family didn’t have to come into it.

Graham was eighteen and rubbish at talking to females. Even some he’d known years, like his brothers’ wives. He looked like a grown man, only he wasn’t yet; he was just all shoulders and neck, wide forehead, and no talk. Everyone in the flute band was aware of this, so when they were out in the Ulster wilds, it was Graham they dispatched to get the lunch, because it was a girl he’d have to speak to on the burger van: a fine one.

He’d been up since dawn, drumming and drinking all morning. It was his first time away from home, his first Orange Walk outside of Glasgow, but nothing like the other Walks he’d been on. Same skirling flutes, dark suits, bright sashes, and crown and Bible banners, but no tarmac and traffic, no high flats and crowds of torn-faced shoppers. Tyrone was all wet fields and
hedgerows, as far as his eye could see, and the echo of the Lambegs thudding back at them from the low hills. There were masses of folk out too: more every village they passed through, and the field they stopped in at the halfway mark was heaving. Grannies in deckchairs with tea in flasks, mobs of young kids in Rangers-blue T-shirts; candyfloss, and sausage suppers, smell of wet grass and frying onions.

The lodges were on the far side; all the dour faces, making their speeches. Protestant values in chapter and verse. The band stuck with the crowd, though, and the colour: more chance of a drink there. Graham hadn’t paid for a pint since he got here. There were always more folk buying, especially if he told them his Grandad was from Ireland: his Mum’s Dad. And that Papa Robert was in the Orange. Graham’s tongue loose with lager, he’d been telling folk ever since the ferry, but his tongue was pulled tight again by the sight of Lindsey.

Dark red hair. Wee skirt and trainers, bare arms. All those freckles. She drew all eyes in the queue, including Graham’s. Lindsey was taking the money, getting the cans of juice out of the fridge, and adding up what was owed in her head. Half the band had set their sights on her for after, even if none of them rated their chances, and Graham could see why, when she turned her grey eyes on him:

She knew he’d been staring. So Graham had to look past her to get the words out. He was ordering for most of the band, or that’s what it felt like. And then a couple of the flutes kept changing their minds, calling across from the grass where they’d parked themselves with the drums; chopping and changing between burgers and bacon rolls. They were doing it to wind him up, Graham knew that fine well, so he did his best not to
let it show, except the order got too hard to follow, and then Lindsey gave up on the sums and got the calculator out of the cash box.