Read The Weight of Honor Online

The Weight of Honor 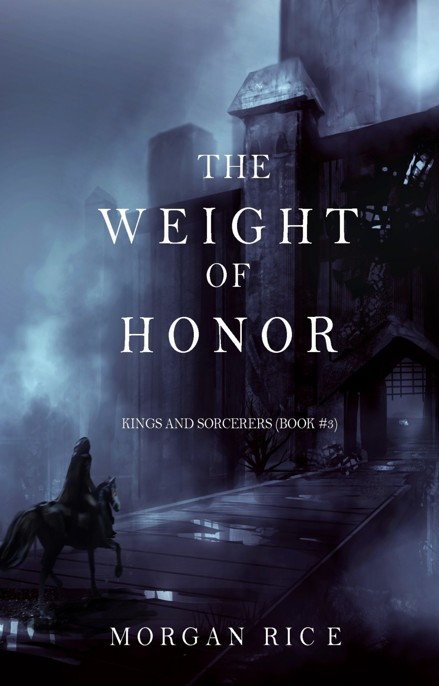 TURNED
(Book #1 in the Vampire Journals),
ARENA ONE
(Book #1 of the Survival Trilogy),
A QUEST OF HEROES
(Book #1 in the Sorcerer’s Ring) and
RISE OF THE DRAGONS
(Kings and Sorcerers—Book #1) are each available as a free download on Amazon!

Morgan loves to hear from you, so please feel free to visit
www.morganricebooks.com
to join the email list, receive a free book, receive free giveaways, download the free app, get the latest exclusive news, connect on Facebook and Twitter, and stay in touch!

“If you thought that there was no reason left for living after the end of THE SORCERER’S RING series, you were wrong. In RISE OF THE DRAGONS Morgan Rice has come up with what promises to be another brilliant series, immersing us in a fantasy of trolls and dragons, of valor, honor, courage, magic and faith in your destiny. Morgan has managed again to produce a strong set of characters that make us cheer for them on every page.…Recommended for the permanent library of all readers that love a well-written fantasy.”

“RISE OF THE DRAGONS succeeds—right from the start…. A superior fantasy…It begins, as it should, with one protagonist's struggles and moves neatly into a wider circle of knights, dragons, magic and monsters, and destiny.…All the trappings of high fantasy are here, from soldiers and battles to confrontations with self….A recommended winner for any who enjoy epic fantasy writing fueled by powerful, believable young adult protagonists.”

“An action packed fantasy sure to please fans of Morgan Rice’s previous novels, along with fans of works such as THE INHERITANCE CYCLE by Christopher Paolini…. Fans of Young Adult Fiction will devour this latest work by Rice and beg for more.”

--
The Wanderer,
A Literary Journal
(regarding
Rise of the Dragons
)

“A spirited fantasy that weaves elements of mystery and intrigue into its story line.
A Quest of Heroes
is all about the making of courage and about realizing a life purpose that leads to growth, maturity, and excellence….For those seeking meaty fantasy adventures, the protagonists, devices, and action provide a vigorous set of encounters that focus well on Thor's evolution from a dreamy child to a young adult facing impossible odds for survival….Only the beginning of what promises to be an epic young adult series.”

“THE SORCERER’S RING has all the ingredients for an instant success: plots, counterplots, mystery, valiant knights, and blossoming relationships replete with broken hearts, deception and betrayal. It will keep you entertained for hours, and will satisfy all ages. Recommended for the permanent library of all fantasy readers.”

“In this action-packed first book in the epic fantasy Sorcerer's Ring series (which is currently 14 books strong), Rice introduces readers to 14-year-old Thorgrin "Thor" McLeod, whose dream is to join the Silver Legion, the elite knights who serve the king…. Rice's writing is solid and the premise intriguing.”
--Publishers Weekly

Listen to KINGS AND SORCERERS in its Audiobook edition!

All rights reserved. Except as permitted under the U.S. Copyright Act of 1976, no part of this publication may be reproduced, distributed or transmitted in any form or by any means, or stored in a database or retrieval system, without the prior permission of the author.

This is a work of fiction. Names, characters, businesses, organizations, places, events, and incidents either are the product of the author’s imagination or are used fictionally. Any resemblance to actual persons, living or dead, is entirely coincidental.

“If I lose mine honor,

Theos dove for the countryside, filled with a fury he could no longer contain. He no longer cared what his target was—he would make the entire human race, the entire land of Escalon, pay for the loss of his egg. He would destroy the entire world until he found what he was looking for.

Theos was torn by the irony of it all. He had fled his homeland to shelter his egg, to spare his child the wrath of all the other dragons, all threatened by his offspring, by the prophecy that his son would become Master of All Dragons. They had all wished to destroy him, and that, Theos could never allow. He had fought off his fellow dragons, had received a grievous wound in the battle, and flown, wounded, thousands of miles across many great seas, until he had come here, to this island of humans, this place where the other dragons would never look for him, all for safe harbor for his egg.

Yet when Theos had landed, had placed his egg on the remote forest floor, it had left him vulnerable. He had paid for it dearly, receiving fresh wounds from the Pandesian soldiers, and losing sight of his egg as he’d fled in haste, his life spared only by that human, Kyra. On that confusing night, amidst the snowstorm and raging winds, he had never been able to find his egg again, buried in the snow, despite circling, returning again and again. It was a mistake for which he hated himself, a mistake for which he blamed the human race, and for which he would never, ever forgive.

Theos dove ever faster, opened his jaws wide, roared in rage, a roar that shook the very trees, and breathed a stream of flame so hot that even he recoiled from it. It was a massive stream, powerful enough to wipe out an entire city, and it rained down on his haphazard target: a small country village unlucky enough to lie in his path. Down below, several hundred humans, spread across farms and vineyards, had no idea of the death about to greet them.

They looked up, faces frozen in horror as the flames descended—but it was too late. They shrieked and ran for their lives, but the cloud of flame caught them. The flames spared no one—men, women, children, farmers, warriors, all those who ran, and all those who stood frozen. Theos flapped his great wings and set them all aflame, set their houses aflame, their weapons, their livestock, their possessions. They would all, every single last one of them, pay.

When Theos finally swooped back up, nothing remained. Where the village once stood was now a great conflagration, fires which would soon reduce it to ash. Fitting, Theos thought: from ashes humans came, and to ashes they would return.

Theos did not slow. He continued to fly, staying low to the ground, roaring as he hacked away at trees, clawed off branches in a single swipe, tore leaves to shreds. He flew along the treetops, carving out a path, still breathing flame. He left a great trail of flame as he went, a scar upon the land, a roadway of fire for Escalon to always remember him. He set aflame great swaths of the Wood of Thorns, knowing it wouldn’t grow back for thousands of years, knowing he would leave this scab upon the land and gaining some satisfaction at the thought. He realized, even as he breathed, that his flames might find and burn his own egg. Yet, overwhelmed with rage and frustration, he could not stop himself.

As he flew, gradually, the landscape changed beneath him. Woods and fields were replaced by stone buildings, and Theos peered down and saw he flew over a sprawling garrison, packed with thousands of soldiers in blue and yellow armor. Pandesians. The soldiers scanned the skies in panic and wonder, armor glistening. Some, the smart ones, fled; the brave ones stood their ground and as he neared, they threw spears and javelins his way.

Theos breathed and burned all the weapons in midair, sending them raining back to the earth as piles of ash. His flames continued down until they reached the now-fleeing soldiers, burning them alive, trapped in their shiny suits of metal. Soon, Theos knew, all those suits of metal would be rusting husks on the ground, a memento of his visit here. He did not stop until he burned every last soldier, leaving the garrison one giant cauldron of flame.

Theos flew on, flying north, unable to stop himself. The landscape changed, and changed again, and he did not slow even when he spotted a curious sight: there, far below, appeared a massive creature, a giant, emerging from a tunnel in the ground. It was a creature unlike any Theos had ever seen, a powerful creature. Yet Theos felt no fear; on the contrary, he felt anger. Anger for its being in his path.

The beast looked up and its grotesque face collapsed in fear as Theos dove down low. It, too, turned and fled, back for its hole—but Theos would not let it go so easily. If he could not find his child, then he would destroy them all, man and beast alike. And he would not stop until everyone and everything in Escalon was no more.

Villain's Lair by Wendelin Van Draanen
CLOSE TO YOU: Enhanced (Lost Hearts) by Dodd, Christina
Deception by B. C. Burgess
Tokyo Vice by Jake Adelstein
All Things New by Lynn Austin
Suture (The Bleeding Worlds) by Stone, Justus R.
Gold Shimmer by P. T. Michelle
Outta the Bag by MaryJanice Davidson
God's Jury: The Inquisition and the Making of the Modern World by Cullen Murphy
Skin by Karin Tabke