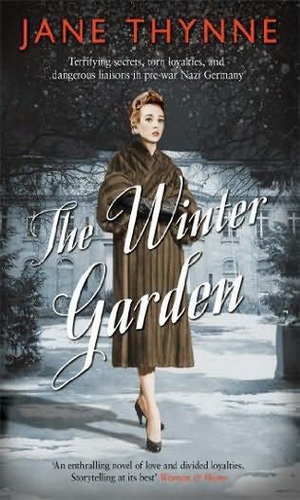 Berlin, 1937. The city radiates glamour and ambition. But danger lurks in every shadow…Anna Hansen, a bride-to-be, is a pupil at one of Hitler's notorious Nazi Bride Schools, where young women are schooled on the art of being an SS officer's wife. Then, one night, she is brutally murdered and left in the gardens of the school. Her death will be hushed up and her life forgotten. Clara Vine is an actress at Berlin's famous Ufa studios by day and an undercover British Intelligence agent by night. She knew Anna and is disturbed by news of her death. She cannot understand why someone would want to cover it up, but she soon discovers that Anna's murder is linked to a far more ominous secret. With the newly abdicated Edward VIII and his wife Wallis set to arrive in Berlin, and the Mitford sisters dazzling on the social scene, Clara must work in the darkness to find the truth and send it back to London. It is a dangerous path she treads, and it will take everything she has to survive…Praise for The Winter Garden:'An absolute cracker of a read….fast-paced and gripping from the start…Thynne expertly maintains the suspense, while evoking the tension of Berlin as the city gathers its strength for war' Sunday Times 'A thoroughly enjoyable read: fast-paced, atmospheric and genuinely suspenseful' Mail On Sunday Novel of the Week 'A thrilling ride' Robert Elms, BBC Radio LondonPraise for Black Roses:'A compelling story of love and betrayal in Hitler's Berlin. Peppered with real characters, Black Roses offers a fascinating glimpse of the extraordinary world of the Nazi wives' Daisy Goodwin, author of The Last Duchess'A superbly atmospheric romantic thriller and an extraordinary recreation of 1930s Berlin, which reaches right into the heart of the most mysterious and vilified Nazi wife, Magda Goebbels to find a real woman' Kate Saunders

The Winter Garden
By the same author:

The Weighing of the Heart

This book is copyright under the Berne Convention.

No reproduction without permission.

The right of Jane Thynne to be identified as author of this work has been asserted in accordance with sections 77 and 78 of the Copyright, Designs and Patents Act, 1988.

Names, characters, places and incidents are either a product of the author’s imagination or are used fictitiously.

Typeset in Bembo by M Rules

‘Woman’s world is her husband, her family, her children and her home. We do not find it right when she presses into the world of men.’

‘Take up the frying pan, dustpan and broom and marry a man.’

The flash and dazzle of fireworks, like multicoloured shrapnel, studded the night sky. Vivid bursts of phosphorus erupted in the damp air, bloomed into extravagant showers of
stars, then fizzled and died against the dark sheet of the Wannsee below. A faint plume of smoke drifted across the lake as the fireworks fell quiet and night closed in again.

From where she stood, in the deep shadow of the garden, Anna Hansen tried to work out which of the big villas on Schwanenwerder Island had something to celebrate. Fireworks were nothing special
here. There were always parties going on in the grand houses. They all had large gardens stretching down to the lake from where, across the water, loomed the inky mass of Grunewald’s eastern
shore. Between the shores the dip and ripple of small boats could be heard, rocking in the wind as the water slapped against their sides.

Anna shivered in the night air. It was cold standing here, surrounded by softly dripping shrubs. She shuffled her slippered feet and clutched her dressing gown more closely around her. Though it
might have been the bangs and whistles which woke her, in truth she had scarcely been able to sleep, despite an exhausting day. But then, it was always an exhausting day at the Schwanenwerder Reich
Bride School. It seemed there was so much to learn for women who were about to marry members of the SS. It wasn’t like being an ordinary German bride, though, heaven knows, those girls had
their work cut out. But as the Führer said, the women who were to marry the cream of German manhood needed to be something special.

Not that Anna had much choice when she arrived at the Bride School, a stately villa with pillared gates proudly topped by a pair of swastika flags and screened from the world by a ridge of tall
pines. A course there was compulsory, it had been since 1935, on Himmler’s orders, and you needed to submit the certificate you gained to the SS Race and Settlement Office before your
marriage could go ahead. In some ways the School was like a military training academy, with a regime which started at five thirty in the morning and didn’t end until the shattered brides
dropped into their beds at nine o’clock at night. That morning, for example, had begun with the usual outdoor bath, to take advantage of the island’s fresh, pine-scented air, followed
by energetic gymnastics in shorts and vests. After breakfast came Sewing, and then a visit from the local Mother and Child branch for Childcare instruction, before lunch, which was made on a rota
by the brides themselves, wearing headscarves and spotless aprons.

Today they had been focusing on ‘Cooking Without Butter’ because of the shortage, and very dull it had been too. Though that was no bad thing, Anna thought, because all these regular
meals were making her plump. After lunch came Culture, consisting of a talk on fairy tales. All brides needed to learn fairy tales because the German mother was the ‘culture bearer’ to
the next generation. Today’s lecturer had explained how in Cinderella it was the prince’s Germanic instincts that led him to reject the stepsisters’ alien blood and search for a
maiden who was racially pure.

Culture should have been what Anna enjoyed best. She had been a dancer after all, not so long ago. Chorus line at the Wintergarten. Standing there amid the shadowy shrubs, she ran an absent hand
over her rumpled, shoulder-length hair. Her dark roots were showing badly and the bleached curls were already turning to frizz in the damp air. She sighed. It was hard to imagine a greater contrast
between her previous life and the one she was living now. Her old friends would die laughing if they could see her. But then Anna’s circumstances had changed. Changed drastically. And by some
miracle, just as she had needed to escape from a difficult spot, SS-Obersturmführer Johann Peters, six foot two with a jaw like granite and eyes as blue as the Baltic Sea, had walked into her
life. From the moment Johann had come up to her in that dank little nightclub, she hadn’t looked back. If it hadn’t been for Johann she might even have resorted to answering one of
those depressing advertisements you saw in the newspapers. ‘
54-year-old lawyer, pure Aryan, desires male offspring through marriage with young virgin, hard-working, low heels, no
jewellery.
’ So when Johann had requested a dance, and shortly afterwards her hand in marriage, she had taken him up on it without a second thought, even if it meant spending six weeks at
Bride School in preparation.

The villa that housed the Bride School had been occupied by a single Jewish family until it was transferred into the ownership of the Deutsches Frauenwerk. As Anna walked between lessons, she
would look wistfully at the grandeur of the décor, the folded mahogany panelling of the hall and the line of little bells in the kitchen which were connected to different rooms in the house.
The whole place was full of colour; pistachio paint in the hall, almond white on the dado rails, and deep burgundy red in the library, which still smelled of leather and cigars. The music room
– an entire room devoted to music! – was painted daffodil yellow, and the ballroom, which was lavender blue, had a ceiling like a wedding cake, moulded with plaster roses, from where
great chandeliers were suspended. Anna liked to imagine the life that had existed there before – all the parties and the fun and the elegance. There were patches on the walls where
gold-framed oil paintings had hung, and if you stood quite still you could almost sense the family that had gone before, evanescent as a waft of perfume down a corridor, or the faint sound of
laughter in the air.

Now, though, the ballroom had been fitted with desks and its damask curtains taken down in the interests of cleanliness. Cleanliness was all important at the Bride School. Everything had to be
hygienic and disinfected, smelling of soap and polish. Dirt, and all soiled traces of the past, must be scrubbed away. Dust was disgusting, the instructors said. It was almost unGerman.

Anna’s dormitory, where eight girls slept, was a long room on the top floor. It must have been the nursery originally, but it had been redecorated in the same plain, brutal fashion as the
rest of the house. Iron bedsteads flanked the walls, and the floors were bare boards. The wallpaper had been whitewashed over, but if you tipped the wardrobe slightly you could see a remnant of it,
pale pink with knotted posies, in a spot that was difficult to reach. Anna was observant like that. She had an eye for detail; she always liked to know what lay underneath things.

It had been hard to leave her bed and slip out of the house unnoticed. Strangely for an organization which believed so fervently in fresh air, the dormitory window was kept locked and after
bedtime the corridors were patrolled by the sewing mistress, Fräulein Wolff. Brides were encouraged not to leave the room except in cases of emergency. Luckily the only person to notice Anna
waking that night was Ilse Henning, a good-hearted country girl with a shelf of a bosom and a face as scrubbed as a pine table, who blinked at her in puzzlement, then rolled obediently onto her
side. Ilse probably assumed, quite correctly, that her roommate was going into the garden to smoke an illicit cigarette.