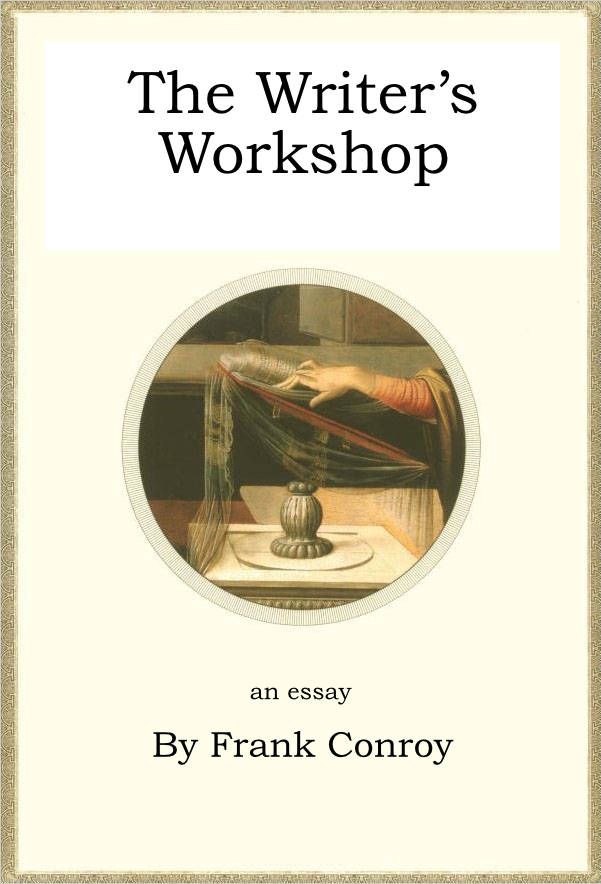 As far as I know, the term “writer’s workshop” first came into usage some sixty years ago when Iowa University, with the blessing of the Board of Regents, decided to accept “creative” theses in partial fulfillment of the requirements toward earning certain advanced degrees. Quite a radical idea at the time. Write a string quartet toward a Ph.D. in music. Paint paintings for a Master of Fine Arts. Mount a ballet for dance, or write a play for theater. Despite the initial scandalization of the academy, the idea spread rapidly and is now commonplace. The words “writer’s workshop” to describe what all those prose writers or poets were doing in all those university classrooms may have been chosen more for their reassuring overtones of craft guilds, handmade artifacts, etc., than for any descriptive precision.

Certainly writer’s workshops around the country reflect wildly different assumptions about what the work should be, what the goals are, and how progress might be measured. Some are simply therapy sessions, attempting to create a warm, nurturing environment in which writers are encouraged to express themselves, release their putative creative energies without fear, and see what happens. Some have a political agenda‌—‌feminist art, black art, social protest art. Some have an aesthetic agenda‌—‌minimalism, realism, metafiction, etc. There are writer’s workshops specializing in horror fiction, detective fiction, children’s fiction, science fiction, and so on. There are workshops that have almost nothing to do with writing, where the texts are little more than an accuse for primal scream catharsis on one hand or new age channeling on the other. So it follows that in talking about a writer’s workshop it must be made clear just whose workshop is under discussion. I will attempt to describe my own at the University of Iowa.

Every Tuesday at 4:30 in the afternoon I meet with about a dozen students. We have all picked up copies of the material we’re going to talk about‌—‌texts generated by the two student writers who are “up” that week‌—‌and have read them several times over the weekend, made editorial comments in the margins, and written letters to the authors attempting to describe our reactions to the texts. These letters are quite important‌—‌first because they are written before any public discussion and hence are not corrupted by what may be said in class and second because they tend to be more supportive, more personal, and sometimes more trenchant than what the writer of the letter might say in class. Thus, if a story is torn apart during workshop, the letters, which are read one week later (since I keep them and read them myself during that time), can work to cheer a student up and encourage more work.

We talk for two and a half hours. The author of the text being examined generally remains silent, which some observers find surprising, but which I encourage. If there is a tension between the writer’s intentions for the text and what the text, standing alone, appears to actually be doing to the readers, that is a tension the writer should face and think about. As well, the writer’s temptation to defend his or her work can lead to wasted time.

But let me back up now, to the first meeting, when we have no texts before us and I try to give a general sense of what I think our work should be. I announce right away that I reserve the right to be wrong, because not to do so would severely restrict my ability to talk at all. Narrative fiction is complex, judgments can be subjective, tastes differ, and rules seldom hold.

I further state that the focus of our attention will be the texts, and our goal will be to expand our awareness of how language functions on the page. We will stop with the text and resist the temptation to go through it and talk about the author. Remarks, thoughts, and reactions to a given piece of writing should be addressed to the room as a whole and not to the author, whose presence, for the rest of us, is superfluous. We are studying the text, what the text actually is rather than what the author might have wanted it to be or thought that it was.

The people in my workshop are usually in their late twenties, very bright, exceptionally well read by modern standards, ambitious, and in thrall to books and literature. As sophisticated as they are about other people’s writing, they are often quite naive about their own, half assuming, for instance, that when they write their souls are on their pages and that an attack on the page is an attack on the soul. I try to make the point that when the soul is truly on the page the work has risen past the level at which it makes much sense for us to talk about it. Victory has been achieved and the work passes over to the attention of students of literature, culture, and aesthetics. We, on the other hand (and I include myself), have more immediate goals. We’re trying to write better prose and to struggle through whatever we have to struggle through to do it. In a not entirely ancillary way, we want to get published, as a confirmation of the value of the work and a partial authentication of the worker in the chosen role of writer. These latter passions are tacitly understood as part of the general background of the workshop, but it fairly soon becomes clear that in only the most minimal sense are they a function of the quality of the work. It is better to separate, even if somewhat artificially, the text from the author and keep our attention on the language.

Chalk in hand, I go to the blackboard and suggest that it might be helpful to think about the relationship between the writer and the reader. A common error is to use the following model of a transportation exchange.

The writer creates a story and puts it into a code (language) that is the text. The reader decodes the text and receives the story: simple transportation from the writer/creator to the reader/witness.

But what really goes on is more complicated. The language statement “yellow pencil” can carry no actual color. The reader must add the color with the mind’s eye for the full image to emerge. Likewise, the reader’s energy is needed to hear tones of voice in dialogue, to infer information that the text only implies, to make full pictures from the text’s suggestive sketches of the physical world, to respond to metaphor, and on up to higher and higher levels. The reader is not a passive witness to, for instance, Hemingway’s “Hills Like White Elephants.” He or she is pouring energy into the text, which, as a result of severe discipline, has been designed to elicit, welcome, and use that energy. Indeed, without work from the reader the story doesn’t make much sense, (What are they going on about? Where is the train taking her and what is she going to do there?) So the above model is wiped from the board and another put in its place.

This model suggests that the reader is to some extent the co-creator of the narrative. The author, then, must write in such a way as to allow the reader’s energy into the work. If the text is unintelligible it falls short of the zone and the reader is blocked. If the text is preemptive and bullying it goes past the zone and smothers the incoming energy, and the reader is blocked. In either case the dance of two minds necessary to bring a living narrative into existence is precluded. Note that no judgment is made about how to handle the reader’s energy once it has been allowed in». Great demands can be made of the reader or lesser, depending on what’s afoot. The point is, without the active participation of the reader’s mind and imagination, absolutely nothing will happen. As well, the model says nothing about the degree or intensity of the energy from the two sides in relation to one another. Obviously it takes very much more energy (and time) to write good prose than it does to read it.

All right, the students say, assuming we buy the idea of the zone for the moment, what can you tell us about getting into it or writing toward it? I respond that that is what we will be doing all semester and that in preparation I will put forward some unproven but possibly useful ideas.

Most writers began writing as an extension of their love of reading. They were excited by books even as children, perceiving a kind of magic going on in narrative that they were eventually drawn to emulate. As they grew older they simply plunged into literature and became used to reading over their heads. They eagerly read over their heads. When, as adults, they try to write they are often as much preoccupied with magic‌—‌effect, simile, metaphors, mood, etc.‌—‌the fancy stuff‌—‌as meaning. They are intoxicated with the seemingly endless power of language, an intoxication mat can be dangerous. For although it is true that reading over one’s head is good, writing over one’s head is very bad indeed. It is an almost certain guarantee of failure, in fact.

When we write we are not alone, starting everything from scratch, however much it might feel that way. Literature is a continuum‌—‌moving and changing to be sure‌—‌but much has already been done for us. Conventions have been established. When we make paragraphs, use punctuation, follow (flexibly) the rules of grammar, and so forth we are home by the flow of that continuum. We can employ an omniscient third-person narrator without having to explain who is narrating because Flaubert and others cleared that particular problem away. A tremendous amount has been done for us. Literature is a river, full of currents and crosscurrents, and when we write we are in it, like it or not. If we grow too forgetful, we can drown.

At the blackboard again I draw the following box:

This is the first order of business in trying to write toward the zone, the first signal to the reader that his or her energy is welcome, the first announcement of a common ground.

1. Meaning.
At the literal level, the writer’s words must mean what they say. The author, having chosen them, must stand fully and firmly behind them.
Obese, fat, chubby, heavy,
and
stout
, for instance, have different meanings. They are not interchangeable.
He sat down with a sigh
means that the sitting and the sighing are happening at the same time, which precludes a construction such as
“I’m too tired to think,” he said as he sat down with a sigh.
The reader will undoubtedly get the drift and will separate the sighing from the saying, but the writing is sloppy from the point of view of meaning. It doesn’t, at the literal level, mean what it says. Errors of meaning are quite common in lax prose, and there are more ways of making them than I can list here.